As I plodded through the rain today, I wondered if Saint Brendan had any waterproof gear for his seven year voyage.  Our hike was a measly eight days and some of my gear proved woefully inadequate! Today marked the end of our Dingle Way adventure. We hiked over 100 miles and enjoyed plenty of sun and fair weather, but the leg from Fahamore to Camp was the pits. It was raining when we set out and never let up. Wind was our only variable throughout the day; we started with a strong headwind gusting 20-25mph which thankfully subsided after a few hours. 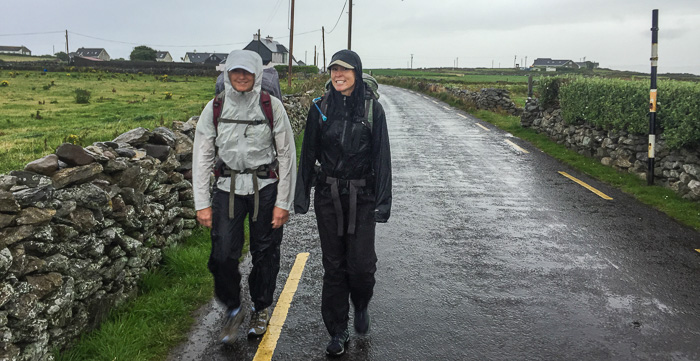 The terrain was flat again, with all beach or road walking.  We were surrounded by ominous grey clouds and with no view to speak of, we had only three small highlights: a seventh century cross slab, a massive perfect rainbow, and wind surfers (aka wave sailers) screaming across the bay. 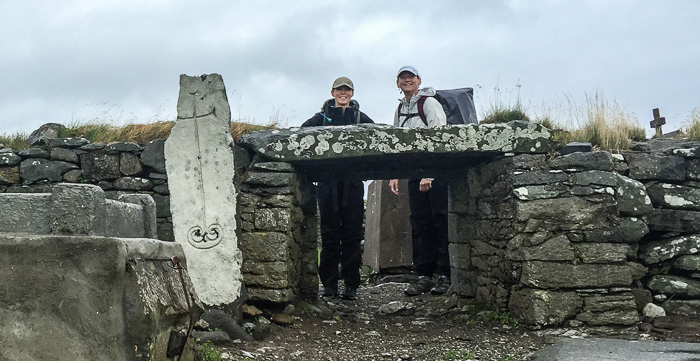 The wind surfers provided distraction for 30 minutes or so, and of course we talked, but that left plenty of quiet time to think your own thoughts and mine turned to Saint Brendan. Just yesterday we crossed over the Brandon Mountains where Saint Brendan fasted before setting out on his epic journey. And though visibility was poor today, we could squint across Tralee Bay to spy the ghostly outline of Fenit where Brendan was born in 484 AD.

Saint Brendan’s travels were first recorded in 900 AD in the Navigatio Sancti Brendani (The Voyage of Saint Brendan). The manuscripts relay that Brendan built a currach with mast and sail, fasted on a mountain top for 40 days, and then set out with 14 monks to find the Island of Paradise. Their fantastical travels take them to islands with sheep as large as cows, birds that sing psalms, and giant blacksmiths who threw slag at them. They also come upon a coagulated sea, monstrous sea creatures, and a silver pillar wrapped in a net (!).

Scholars have difficulty separating fact from fiction, but many believe that Saint Brendan did indeed set out on a voyage where he encountered the Faroe Islands, Iceland, volcanoes, and icebergs. Some even postulate that he made it all the way to North America a good 500 years before the Vikings. In 1976, Tim Severin proved that the journey was at least possible. He built a currach modeled after Saint Brendan’s and completed a trans-Atlantic journey ending in Newfoundland. Did Saint Brendan make an historic (but embellished) journey, or is his tale nothing more than Irish myth? Keep digging Ireland! Traveling this country, you can only wonder at what still lies buried underfoot waiting to be discovered. 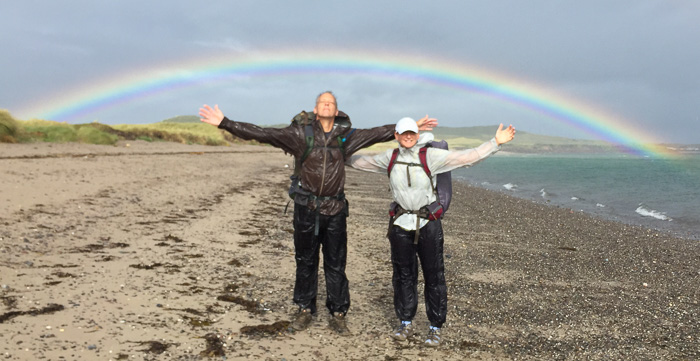 Chris and Karen, SO close to a pot of gold!

Back to the rain gear. Mine was undoubtedly better than Saint Brendan’s, but suboptimal for this trip. I had a sneaking suspicion my rain jacket had lost some of its waterproofing, but wasn’t sure. It’s hard to tell whether dampness under the jacket is due to rain from the outside or sweat from the inside. Still, I was worried and bought a small umbrella as cheap insurance. Silly! I didn’t dare bring it out in the high winds, so it remained extra weight in my pack. I ended the day chilled and damp (but not soaked) under my coat, so it works some but I’ll likely upgrade once home.

My REI rain pants were rock solid; no complaints there. The shoes, though…yikes. Mesh-top Solomons were a big miscalculation for this trip. Waterproof shoes with gaiters are a must for Ireland. We spent so much time in the rain and/or waterlogged terrain, my socks ended up sopping wet most days. Waterproof shoes protect against ground conditions while gaiters are a lifesaver in heavy rain ensuring against water entering through the top of your shoes. I didn’t suffer from the shoe mistake since my socks and shoes dried overnight. Still, days could have been more comfortable with better gear.