Kilfane Church is undoubtedly a hidden gem, but Jerpoint Abbey? It doesn’t shock and awe like the Rock of Cashel, but still, I’m surprised it remains a lesser-visited heritage site. Of course that means no crowded masses to contend with, so that’s a plus! If you’re itching for some quiet meandering and outstanding medieval sculpture - one of many highlights - take a quick drive to these lovely treasures just 20 minutes south of Kilkenny city.

I fell in love with Jerpoint in 2012 and was eager to bring family for a visit, but when we pulled up the buildings looked unfamiliar. Uh-oh. Was this the place with the cool stone carvings or did I mess up?? I breathed a sigh of relief about 10 minutes into the free tour. We had the right spot and Jerpoint is as impressive as ever. 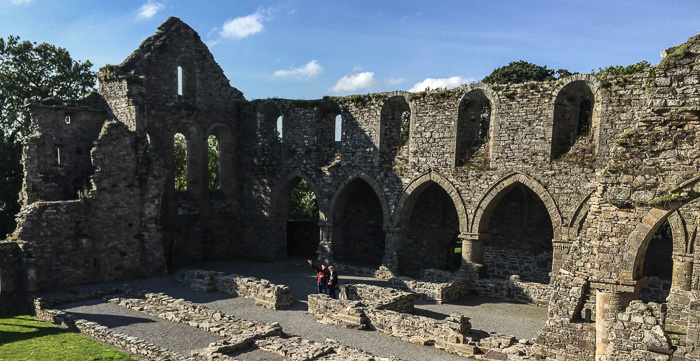 Jerpoint Abbey. Beautiful, even without the lovely cloister (it's off to the left, just out of sight) and stone carvings.

So what sets this abbey apart? 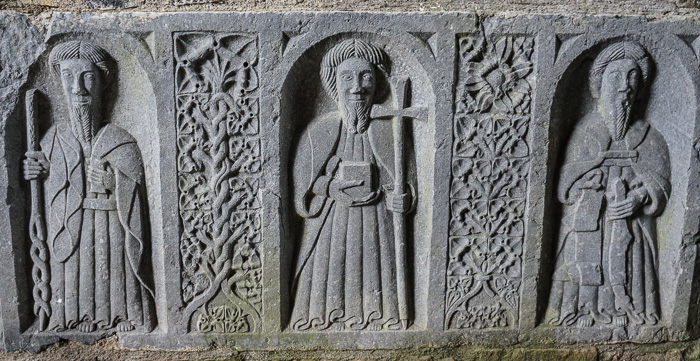 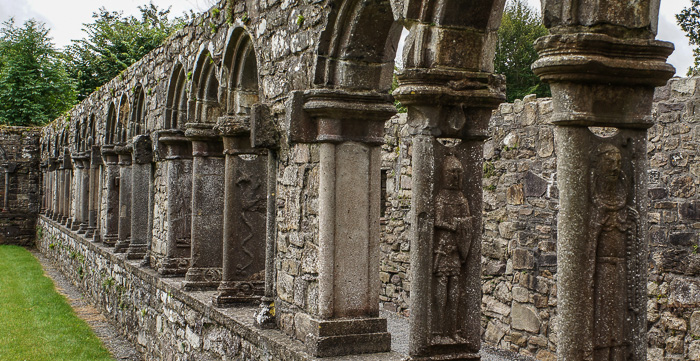 The magnificent cloister with stone carvings at Jerpoint Abbey 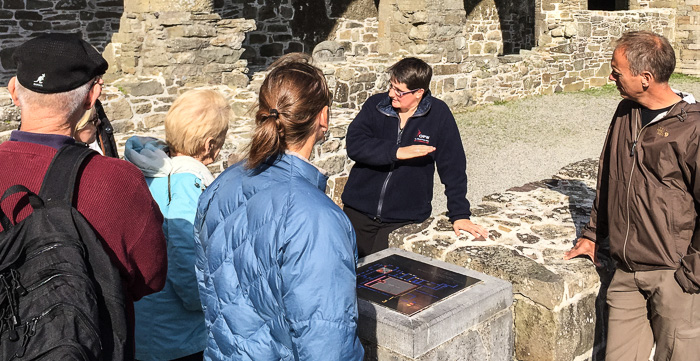 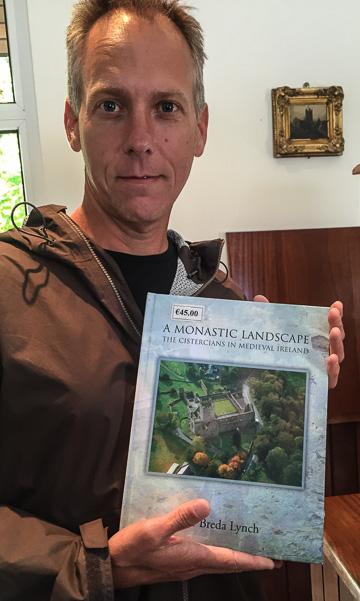 A stop at Jerpoint is sure-fire win: learn about Cistercian monks, ogle the fine stonework, and climb up a flight to gain a bird’s eye view of the abbey and surrounding grounds. Delightful.

Kilfane Church is lesser known but we thought it would be an easy find. Not so fast. The church comes up readily in Google maps, and yet we pulled up to an intact ~19th century church, not the 14th century ruin we were expecting. What’s the deal? 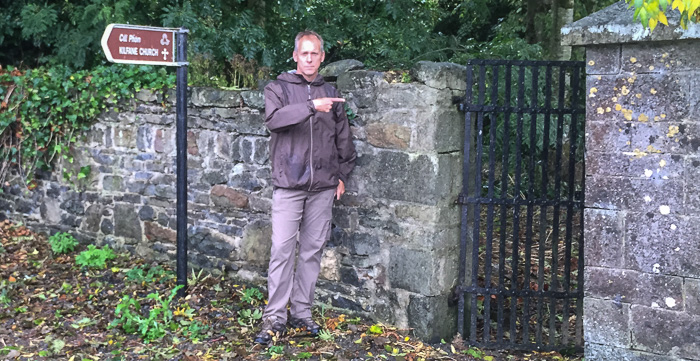 The Kilfane Church sign is misleading; it points to the more modern church. To find the church ruin and The Long Man, go through the gate to Chris's left and walk just 50 feet or so.

Thank goodness for mobile wifi; a bit of hunting revealed we were in the right place, but we were looking in the wrong direction. Silly us! To find the ruin, we had to walk exactly opposite the signpost, through the black gate and along a wooded path. Within a few short steps, the ruin appeared. 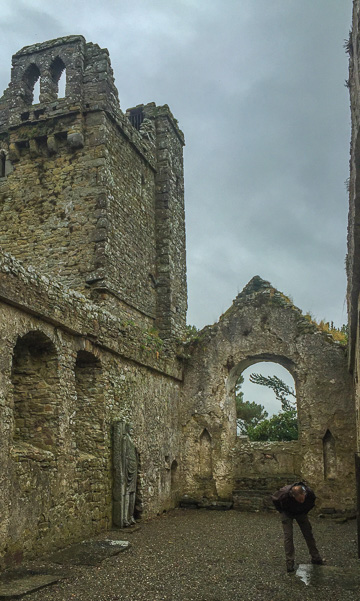 I was of course enthralled to see the impressive 8-foot statue of a medieval knight, dubbed The Long Man; this 14th century Cantwell effigy is the reason we came and he did not disappoint.  Once again, Ireland bewilders. This statue has been described as the finest of its type in Ireland and yet he stands unprotected in a quiet copse of trees by the side of the road.  The fact that he still stands unmolested seems a powerful testament of respect for the past, afforded by natives and visitors alike.  Each time I visit an ancient site like this I am humbled and touched to have such a personal encounter with history. 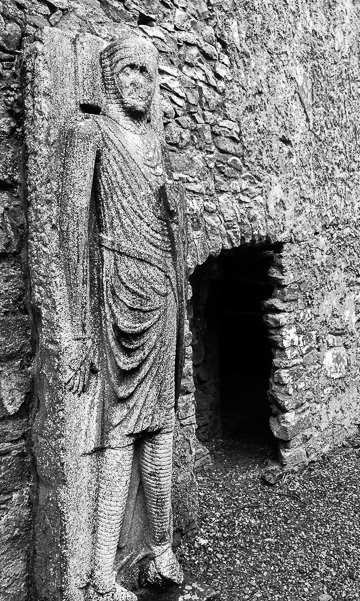 The Long Man in Kilfane Church. Note the opening beside him; that's how you get to the climbing tower!

As with most church ruins, there are plenty of interesting grave stones and unique architectural points to explore. Chris and I were wandering quietly, each in our own little world, when I realized that Chris had disappeared. He finally called to me…from about 40 feet up!! Woo-hooo! None of the articles I read pointed out that you can climb the attached castellated tower. Bonus! 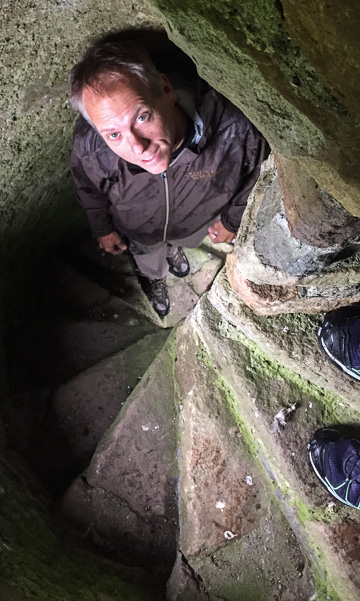 Chris in the tower stairwell at Kilfane Church. Note that the stairs spiral anti clockwise - the wrong way for castle defense, but ok for a church tower? 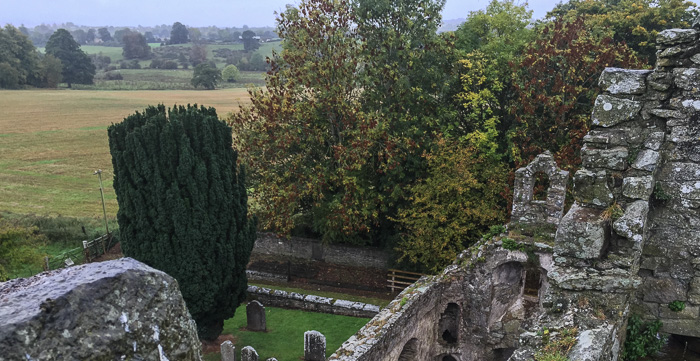 View from the top of the Kilfane Church tower

This is exactly why I love hunting for off-the-beaten-track piles of old rocks. You never know know what you’ll stumble across. 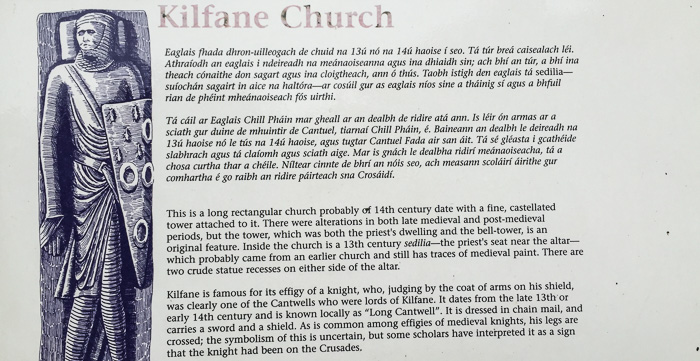 Have more time to explore the area?  Pop over to Kells to see Mullins Mill, Kells Priory, and the Kilree monastic site.