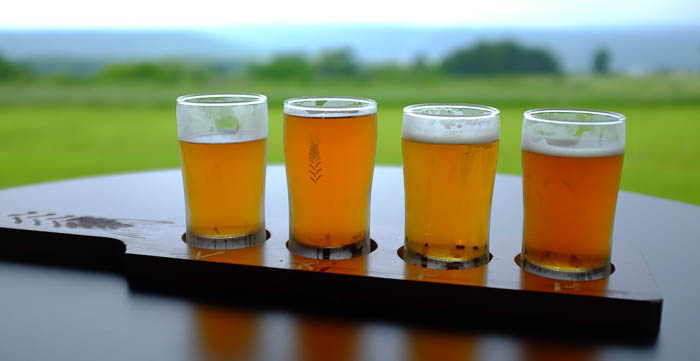 I knew Chris was dying to visit some local breweries so Matthew and I planned a Father's Day tour of the five farmhouse breweries on Keuka Lake. Finding them was easy; I consulted the online map on the Finger Lake Beer Trail website. Since Abandon Brewing offered a special Father's Day event with a band starting at 2pm, we saved that one for last. All in, it took 3 hours to sample flights from the five breweries; the clock started when we arrived at the first brewery and stopped when we left the last.

With at least 69 breweries in the Finger Lakes region, this is craft-beer heaven. A few of the breweries we visited are licensed New York Sate Farm Breweries. To receive this designation, the beer must be made primarily from locally grown farm products. From now until 2018, at least 20% of the hops and 20% of all other ingredients must be grown in New York State; by 2023, those numbers will rise to 60%.

I'll briefly summarize each brewery we visited. If you're a craft beer fan you may find my beer descriptions lacking. Chris is the beer aficionado, so I am often paraphrasing his comments!

The Brewery of Broken Dreams 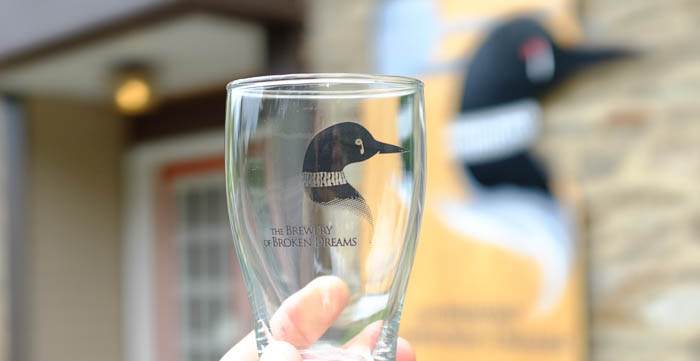 This NY State Farm Brewery just opened in November 2014. The tasting room was finished in dark wood and stone, the lighting was dim, and the atmosphere subdued but welcoming. The whole experience felt like a wine tasting. We were served by one of the owners so received detailed information about the brewery and beers. 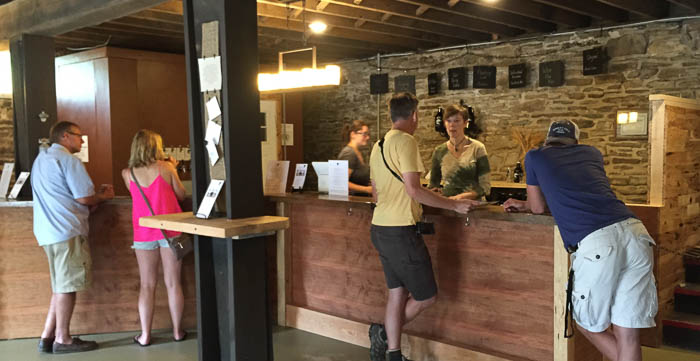 Generally, the beers fell on the malty side. Chris liked them all and appreciated that the brewers aren't jumping on the IPA bandwagon or going over-the-top with strong or bitter beers. He feels they are going for simplicity and likens their offerings to single malt scotch. 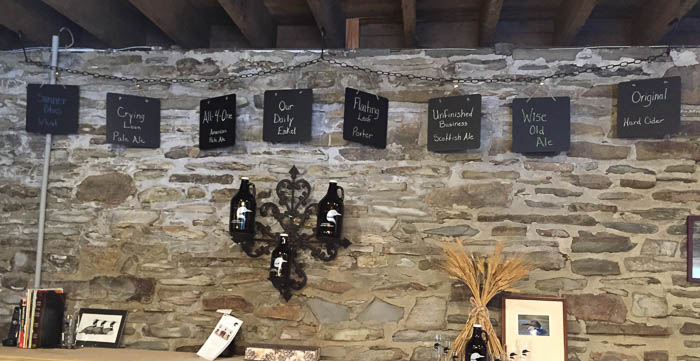 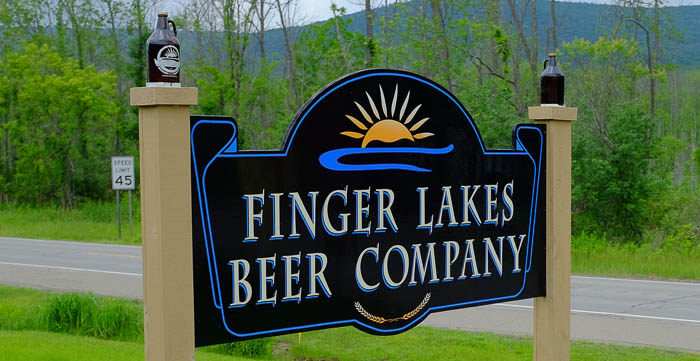 This brewery is right off Route 54; I can't count how many times I've passed by without noticing. Finger Lakes Beer has been in operation since 2009 and chose their location for the access to lake water for brewing. The vibe was lively with classic rock playing, and the additional seating area next to the tasting bar encourages folks to come in, relax and share a drink. Our server Chris was an amiable college student who not only described the beer in detail, but regaled us with stories throughout the tasting. A friendly server makes a marked difference in the tasting experience! 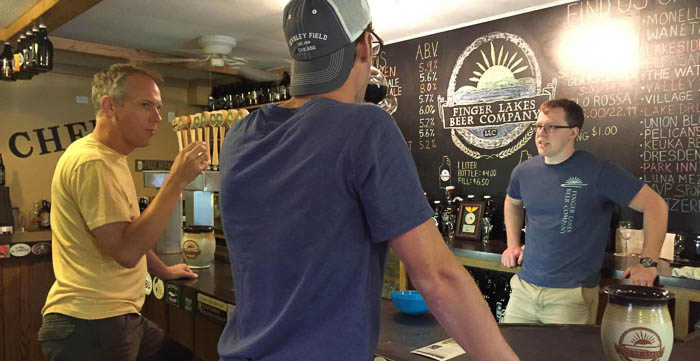 As for the beer tasting, I was initially disappointed. The Watermelon Wheat and Hefeweizen were weak and lacked depth. Chris said the flavor really kicked in as the tasting continued though. The Ring of Fire was unique with smoked malt imparting a distinctive flavor. Chris is partial to citrusy IPAs an enjoyed the 11/11. By far the highlight was the Hammonds-porter, a medium bodied ale brewed with chocolate malt and vanilla beans. This beer won the 2015 Silver Medal for Best Beer in NY State. Last but not least, Matthew appreciated the free popcorn and tasty root beer on tap. 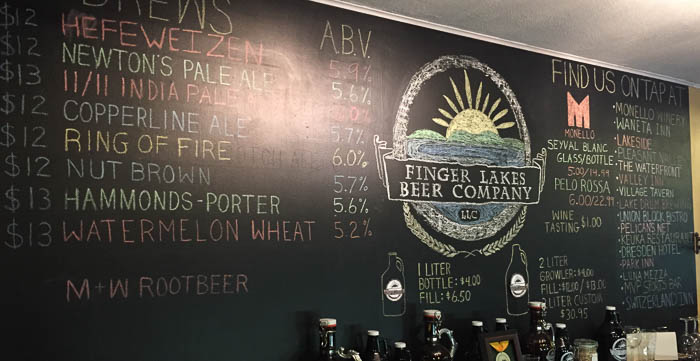 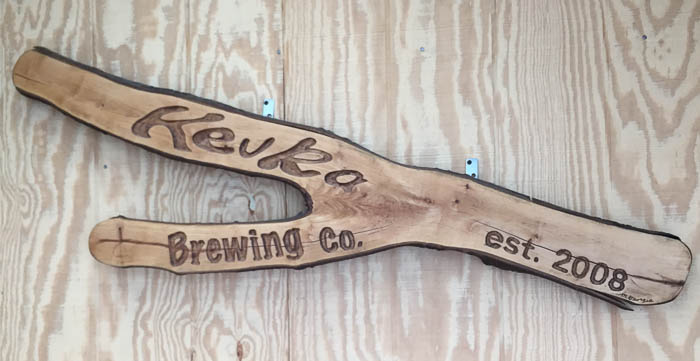 This tasting room opened in 2008 and stakes its claim as the first microbrewery in the Keuka Lake region. In April 2014, they won the F.X. Matt Memorial Cup Award at the Tap NY Festival for "Best Craft Brewery in NYS". The tasting room is small and was quiet and empty when we first arrived. Our server wandered out and got us going, but he was fairly reticent and I felt like an interloper. As we asked questions more people came in, he warmed and the mood lightened, but we never received much info from him; we learned about the beers from a handy flier on the bar. The experience started slow, but gained momentum. We all loved the alt rock music that was playing, and spent quality time chatting with other visitors. 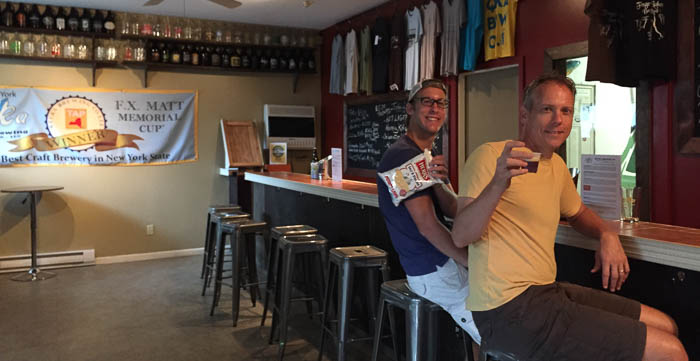 The Honey Kolsch was the best beer I tasted all day. Chris said that overall, the beer was good but felt Finger Lakes Brewing was a little better. The Briglin Road Red Ale was a special additional tasting; it was a standout highlight and Chris bought a bottle to bring home. Matthew was thankful they had chips for sale; the little things kept him going throughout our journey! 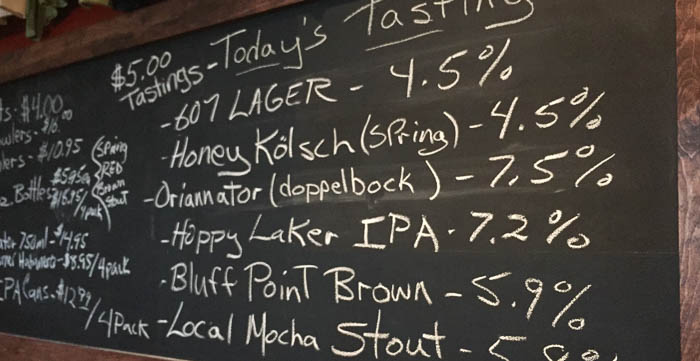 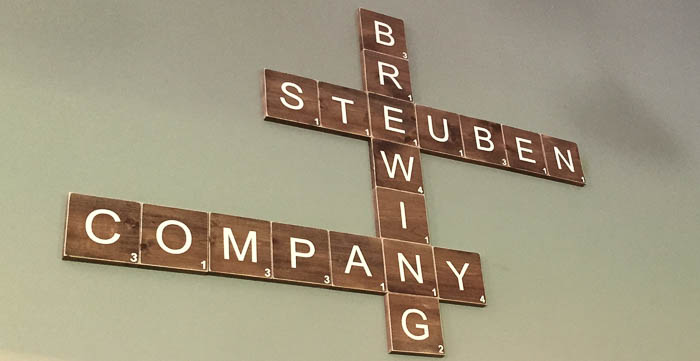 Steuben Brewing is another NY State Farm Brewery. Their building is pretty plain-Jane and unassuming, but once you step onto the front porch, who's looking at the building? All eyes are drawn to the stunning view of Keuka. 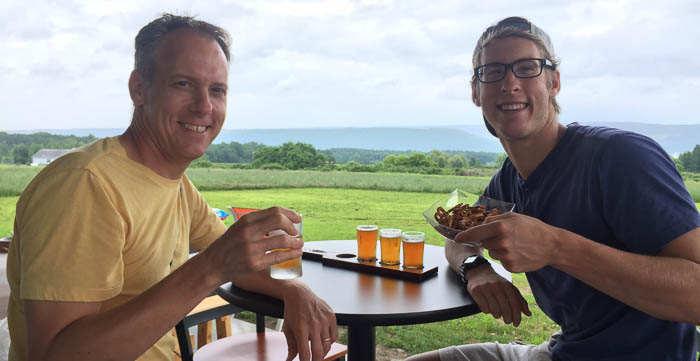 On the porch at Steuben Brewing

We were impressed with how many people were visiting compared to the other breweries. Perhaps it was the view or the the wine tasting also available? This brewery offered the least "experience" of all of them. There was no explanation of the beers or information available at the tasting bar. Chris said the beers were good but no standouts. Still, we relished sitting on the porch, munching on complimentary pretzels, and enjoying the view. 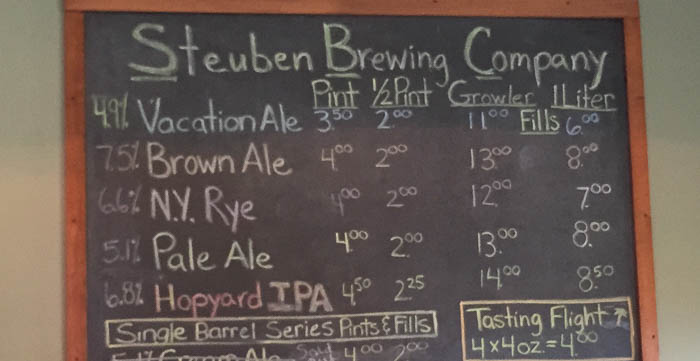 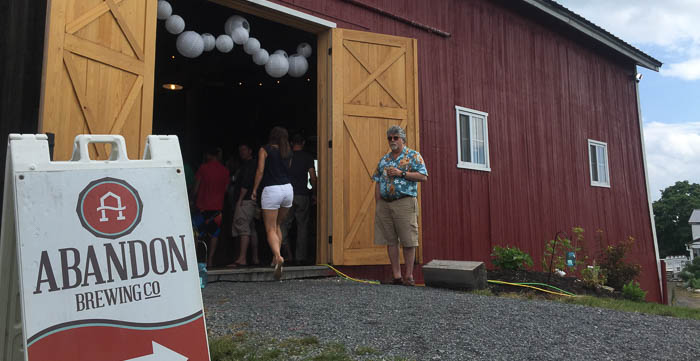 Abandon Brewing is NY State Farm Brewery and operating fruit farm. They are by far the biggest operation of the five breweries, working out of a massive 1800s barn with a large covered pavilion nearby. 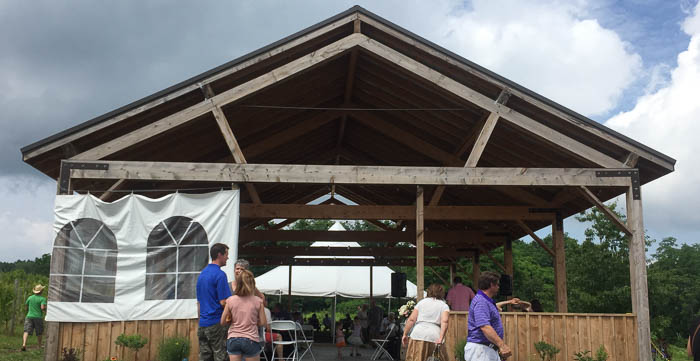 The place was packed, with the parking lot full and cars parked up the side of the entrance road. I'm sure much of the crowd was due to the special Father's Day event featuring cigars, food truck and live band, but given their facilities and gorgeous view of Keuka, I'd bet they have good traffic regardless. 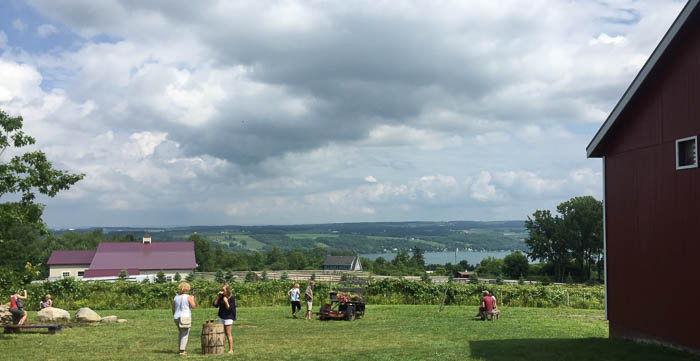 We had to wait for both beer and food, but the weather was perfect and the atmosphere vibrant so we didn't mind. The beer tasting was a wholly different experience; their selections are very strong! Chris only tried one flight of the Flagship beers and loved the Farmhouse IPA. Next time he will sample the Woodshed beers, but not after four other brewery tastings - those will be intense with many at 8-9% alcohol. This brewery is the furthest from our cottage, but we'll surely be back. 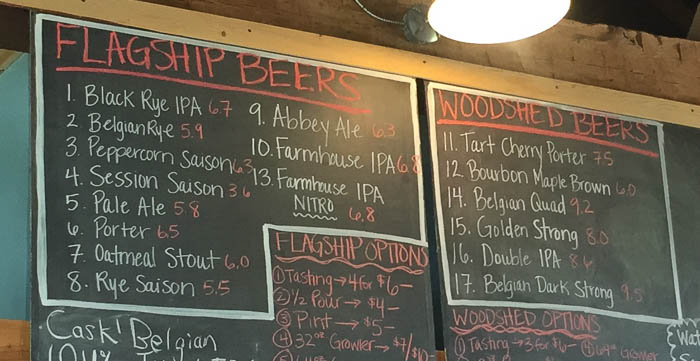 That wraps up our tasting tour, but I have a few additional tidbits. On one of our stops, I learned there's a sixth Keuka Lake brewery that just opened in Penn Yan. Five was plenty for one day so we didn't stop, but I'm sure we'll visit LyonSmith Brewing Co. on a future excursion (138 Water St., Penn Yan, NY 14527). We started this tasting tour at noon had been sustained by popcorn, chips, and pretzels but we were hungry and hopeful for more substantial offerings at Abandon; the Upstairs Bistro food truck was a welcome sight as we pulled up! 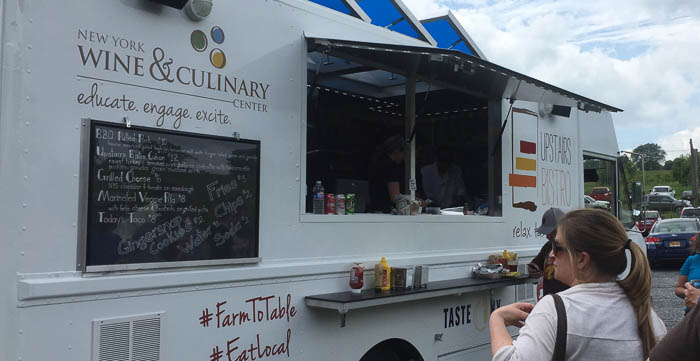 Matthew ordered BBQ Pulled Pork while Chris and I shared a Cuban; both were excellent. Further research revealed that the food truck is part of the New York Wine & Culinary Center, a not-for-profit organization whose mission is to showcase New York’s agriculture, wine, craft beer and food industries. The Upstairs Bistro restaurant is located in Canandaigua; I'm hopeful I can work in a stop someday, perhaps on one of our many Rochester airport runs to pick up lake visitors.