Chris and I recently spent 5 1/2 days in New Orleans and I came away a big fan of the city in general (with its rich history and culture) and Mardi Gras in particular. I wrote this article that touches on Mardi Gras basics. This post will dig into the good stuff: PARADES!

This Mardi Gras season there were 70 parades in New Orleans between January 6th and February 9th. You might be thinking, “That’s ridiculous. Who would want to see that many parades?” or “Parade, shmarade. You’ve seen one you’ve seen them all.” If you’ve never been to a Mardi Gras parade in New Orleans, hold your judgment! These parades are like no other. They have the same basic components of other parades (floats, marching bands, walking groups, spectators, free stuff) but each comes with a twist that acts like a force multiplier for fun.

Near the start of Endymion. A marching band strutting its stuff, and floats rounding the corner in the background.

Take the floats. The Krewe of Endymion rolled with 36 floats in its parade, one of which was over 365 feet long! We were stationed near an intersection and when that double-decker bad boy turned the corner towards us, it kept coming, and coming, and coming, even after the front was long past, like a mini-parade in and of itself. 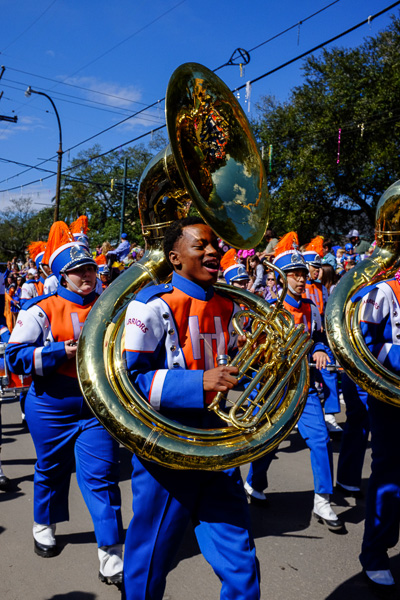 A sousaphone player workin' it!

Or how about the marching bands? St. Aug’s commands attention with percussive beats you feel in your chest, an outrageously full brassy sound that blows your hair back, and marchers that do. not. give. an. inch., not one inch, forcing the crowd back into such a crush that we, as a unit, had to perform matrix-like backbends to avoid rhythmically swaying drumsticks and trombones. Incidentally, St. Aug’s also makes Anne move like I’ve never seen her move before! They’re her favorite band and she will dodge, duck, dip, dive and dodge to out-pace the group and get in prime position to hear them play a second time.

But really it’s all about the throws. I think throws are the key to New Orleans Mardi Gras magic. In my experience, parades are a static event for the spectator. You find a spot to sit or stand and watch the parade pass you by. In New Orleans, you don’t watch a parade, you participate in it. The first time Anne led me off the curb and onto the street I was agog - you can’t stand on a parade route! But wait, there’s more. 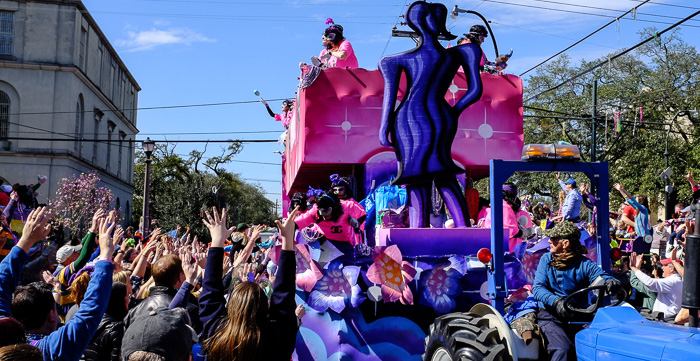 Each time a float approaches, the entire crowd, hundreds of people, surge to its sides smiling and laughing, with arms outstretched screaming “Hey mister! Throw me something, mister!!” and the float riders happily comply chucking beads, cups, doubloons, stuffed toys, Moon Pies, sunglasses, light up bouncy balls, hats, and hundreds of other tchotchkes. 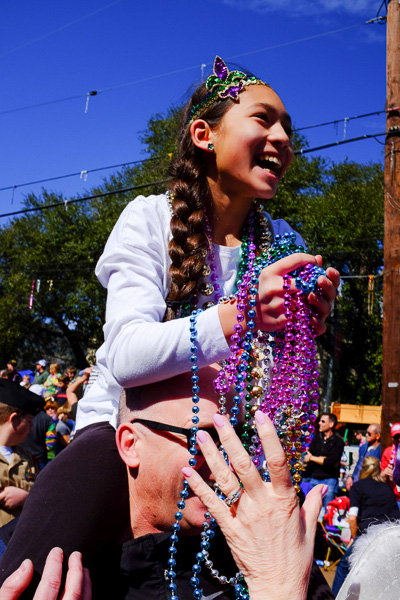 This young lady's teacher was riding a float so Jack gave her a boost, we all screamed like madmen, and beads came raining down.

Sometimes if you’re lucky you’ll make eye contact and get “The Point” where a rider has singled you out for something good. If so, don’t delay - get up there and claim your booty!! And if you’re really lucky, you know a rider and you somehow manage to get their attention - it helps to know their float number, position on the float, and have an armada of loud friends. If these stars align, a rider might bestow upon you a highly coveted signature item like a custom-decorated coconut or women’s high-heeled shoe. Oh don’t roll your eyes - you’d flip to get one! 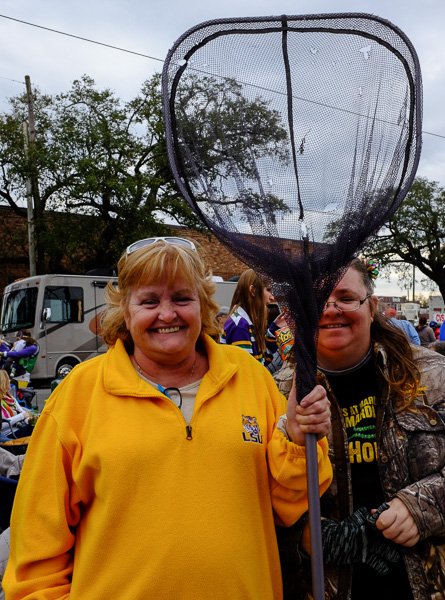 When it comes down to it, throws are the great equalizer. As a parade crowd, we were racially, culturally and economically diverse, but united by a common goal: to be chosen, to be the lucky one, to catch something good, to receive manna from heaven. It’s absurd, I know, but nearly impossible to resist. Back at the hotel, I’d stare at my pile and wonder “What was I thinking? What am I going to do with all of this stuff??”, but then we’d go to another parade and I’d once again be reduced to a little kid begging for loot. Pure joy, fun multiplied.

Mardi Gras roots go deep and I loved hearing long-standing parade traditions and personal family stories: Dad always wore boots so nobody else would get doubloons thrown our way…As a Boy Scout Tom worked hidden inside floats to animate props and make pieces move…We’d always go to our Godparents’ house off of St. Charles, have a pot luck, and wander in and out all day…Each of us kids claimed one of Dad’s pockets and told him “Don’t let the others get my stuff!”

You don’t have to know locals to get a sense of Mardi Gras traditions. Wandering around, you can’t help but notice: 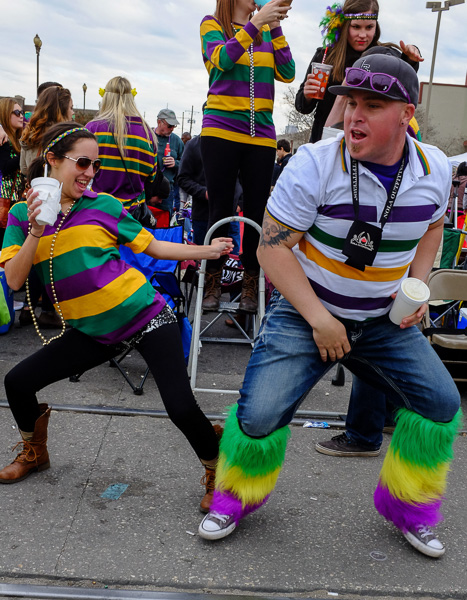 A group of Neutral Ground Side folks, getting into the spirit 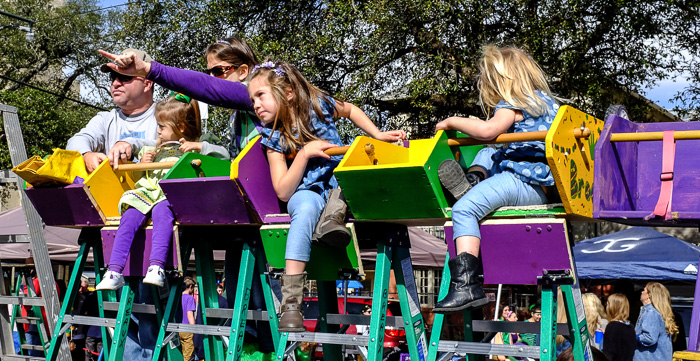 The little ladies have a prime set-up! 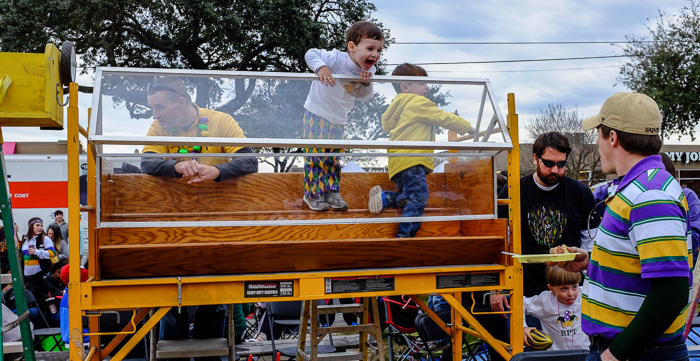 These kids will NOT be hit with flying beads. Way to go dads!

A few more parade-related traditions grabbed my attention; one was subtle. I’ve gotten so used to seeing our world for sale, it took awhile to realize that I never saw business logos on floats. For good reason since Mardi Gras parades can’t have corporate sponsors. Krewes finance their floats through member dues, merchandise sales, and fundraising - quite an undertaking! 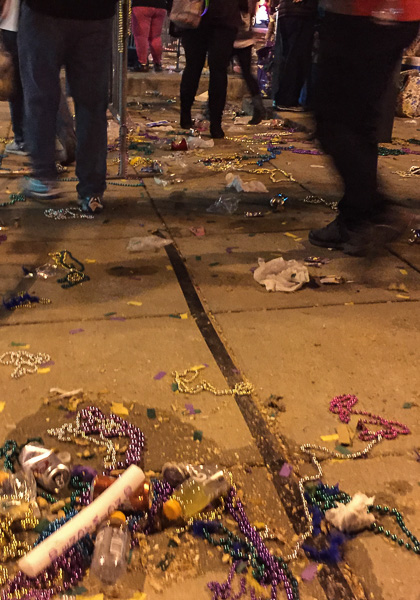 Ugh, trash was everywhere after Endymion passed by and the crowds wrapped up their festivities.

The aftermath of a big parade is a sight to behold with broken beads, beer cans, cups, plastic bags, and a boatload of other trash lining the streets. Our small area was difficult to take in, and same scene was repeated along the entire 5-mile parade route. How would the neighborhood recover? We left Endymion Saturday night at 9pm and then drove the parade routs at noon on Sunday; the transformation was awe-inspiring with only a few isolated spots of garbage, perhaps where parked cars blocked the way. Hats off to all the clean-up crews who work into the wee hours picking up 50–100 tons of trash a night!

Since I mentioned trash tonnage, it’s time to reveal one tradition that’s gone by the wayside. For many years New Orleans rated the success of Mardi Gras and Carnival season based on the weight of trash produced. Loose numbers may still be reported, but it seems the city wants to move away from the potential double whammy of encouraging littering and discouraging recycling. 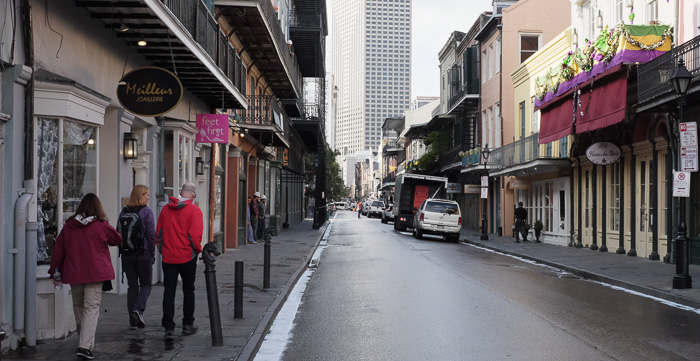 The French Quarter early one morning. Note the suds in the gutter - the streets were scrubbed clean!

How do you know Mardi Gras is officially over? At the stroke of midnight on Fat Tursday, a wedge of mounted police sweep through the French Quarter on Bourbon Street followed by officers on foot, EMS, firefighters, and cleaning crews. I doubt I’ll ever witness this in person, but I wonder if the party really ends, or if it’s largely ceremonial as this article indicates. It’d be a sight to see regardless.

Advice from a newbie

I’ve been to a New Orleans Mardi Gras exactly once, so take the following comments in context. And my list isn’t exhaustive of course; refer to this site for a spot-on set of recommendations. 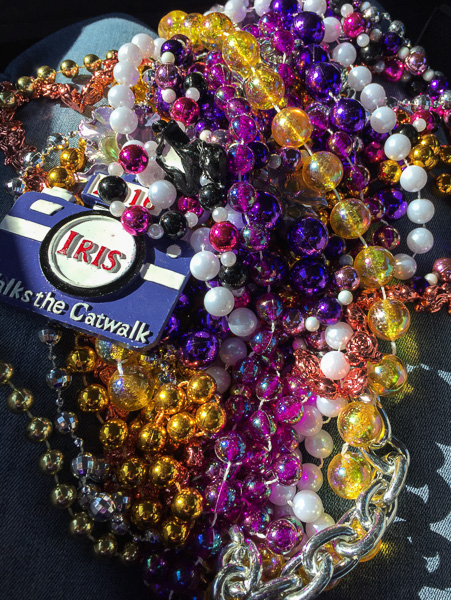 A few of my beautiful beads from the Iris parade.

These ladies have the Mardi Gras spirit! 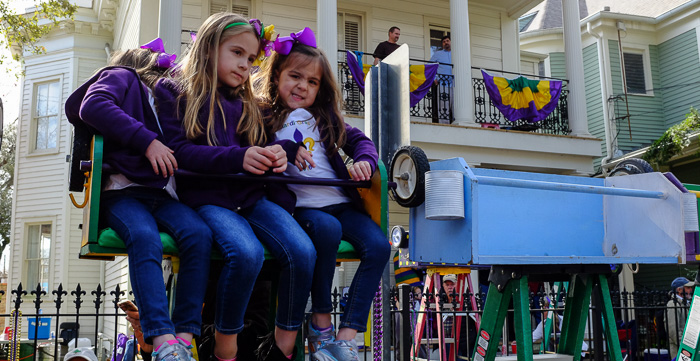 Hmm...the parade hasn't even started. It might be a long day! 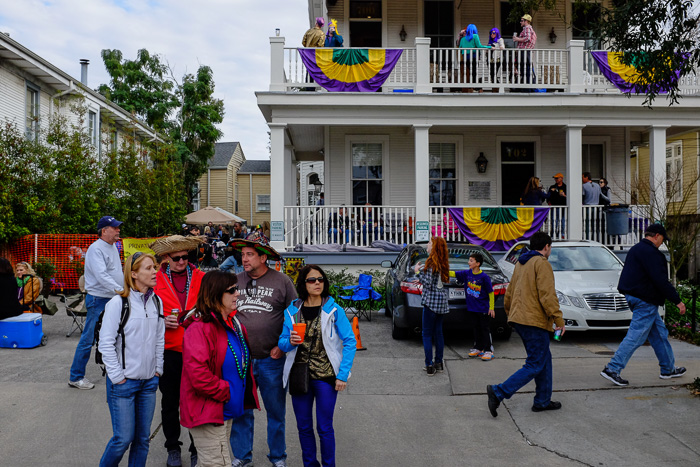 Our group, heading to the parade from our sweet hang-out: a business located right on the parade route. 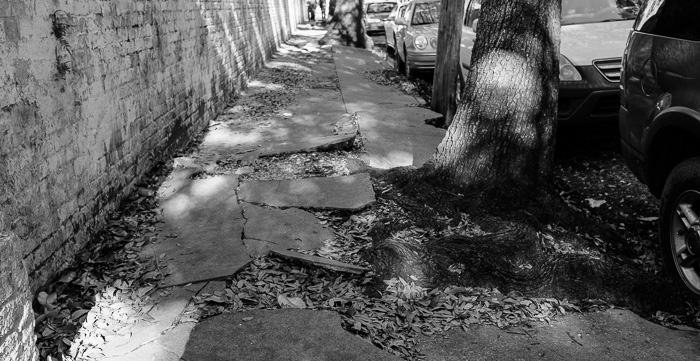 This sidewalk is in the Garden District, but is an apt representation of sidewalks around town.

Part - not all - of our haul from five parades. Crazy!

That’s all she wrote folks. Hope you get to experience a Mardi Gras parade someday. Laissez les bons temps rouler! 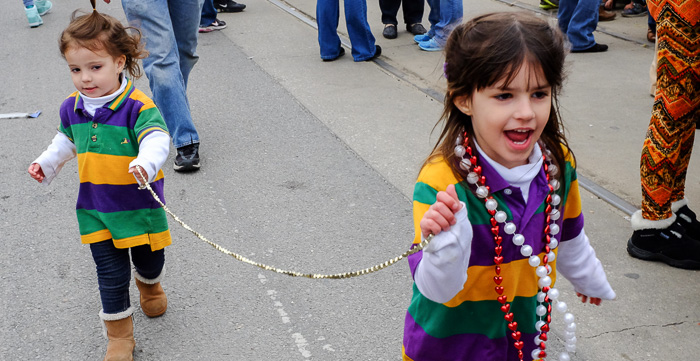 A parade of two before the big show