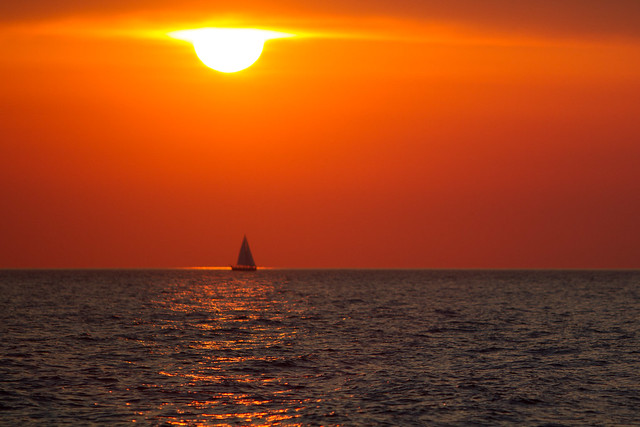 Our first day of sailing brought us to Apokriosis Bay on the island of Kythnos, and everything that could break seemed to break. Our first island adventure started with an anchorage (as opposed to a mooring on a pier in a harbor) in a quiet bay with just a few homes and two restaurants near the beach. This meant taking the dinghy ashore for dinner.

The first thing that broke was Dave and Lisa’s toilet. It wasn’t obvious at first as they just assumed that the toilets on the boat were… crappy. They asked the inevitable obvious question and realized that yes, the toilets are supposed to flush in pretty much a normal fashion. We would battle this for several days.

The next to break was the dinghy motor, on our first trip away from the boat! We were going to have to take to trips to shore in any case, and this just drew things out longer than planned. Then the oar in the dinghy broke, but Jacob took charge, improvised, and was able to keep us on track and get everyone ashore.

I wish I could say that Andrew’s first Greek island meal was a delight of taste and texture, but unfortunately it will go down in legend for all the wrong reasons. He ordered some kind of fish fry and was clearly expecting the usual English battered and fried cod experience. What he got instead was a pile of tiny bait fish, heads and tails included, fried up without batter. We were all happy to share leftovers from our dishes. 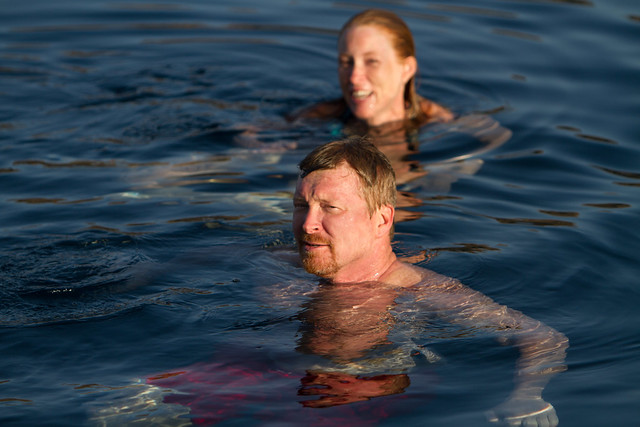 The next morning Julie rises first and when I awake I have no idea what time it might be, though I do feel very rested and slept through the night soundly. We both dress in our swim clothes and Julie heats up water for coffee (which was Starbucks Via, just like on our Philmont backpacking trip). Vassilis is up too with his toolbox out working on the dinghy oar repair. Things are quiet as we sip our coffee in the bay and others begin to trickle out of their cabins to join us. Dave is the first to take the plunge into the cold but invigorating water. I join in the morning swim as do Julie, Lisa, and Matthew. The water is clear to the bottom over 30 feet, which in some ways is beautiful but also reflects the nutrient poor nature of the Med. We hardly see any fish.

At this point in our journey we feel a bit out of control of our itinerary. We have certain islands we really want to visit (Delos, Santorini) but Vassilis is resisting in many cases, and for what we are sure are good reasons (remember: safety, comfort, desires). Santorini is likely a non-starter because of a lack of harbor space for boats like ours as well as little in the way of shielded anchorages. We don’t quite understand the issues yet with Delos, but we will address that later. How do we balance our desires with his wisdom and guidance? We agree to be patient but still persistent with our wishes and keep the dialog going. 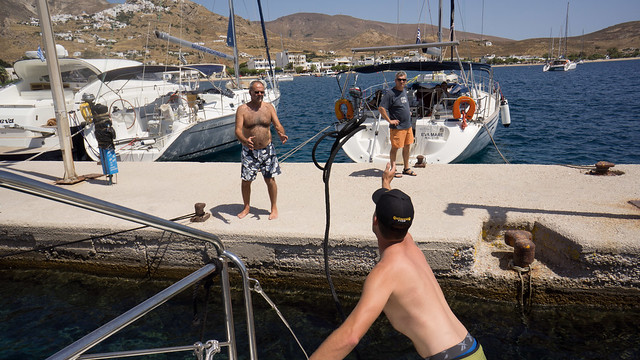 Late morning on June 24 we set sail almost due south for our next stop, the island of Serifos at Livadi harbor. This was our first experience with Med mooring:

Mooring Mediterranean-style–deploying an anchor off the boat’s bow and tying stern lines to a town quay–is de rigueur when sailing in Mediterranean and other European cruising grounds. In high season, with strong crosswinds and with boats packed into small harbors like sardines in olive oil, it can be a daunting prospect. With no finger piers to separate the boats, it’s imperative to set the anchor correctly to secure the boat in position.

The pier moorage was a nice contrast to the relatively isolated feeling of the anchorage the prior day, and we immediately engaged in idle conversation with the other boats surrounding us. We find ample shopping here and stock up on Fix beer and water. But what must you do when in a new Greek island village? Though shalt hike to the highest point. And so we did, in this case to the old village (chora) on a steep peak northwest of the port. Dave and Lisa tap out about 500′ below the peak at an old church, but the rest of us charge on and are awarded with a spectacular view. 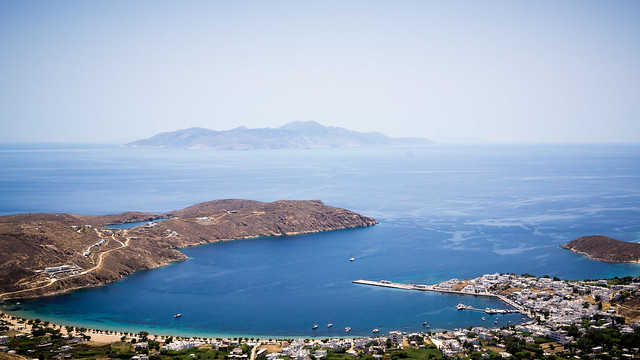 You can see our pier just inside the jetty protecting the harbor. We can also see up the eastern coastline to other secluded beaches to the north. 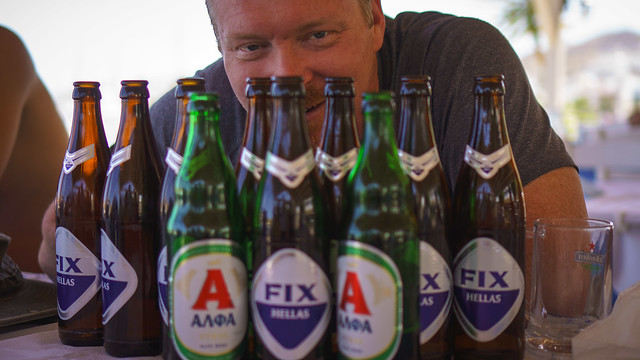 We rewarded ourselves after the trek with a cool swim in the harbor, some ice cream, and a few… beers. 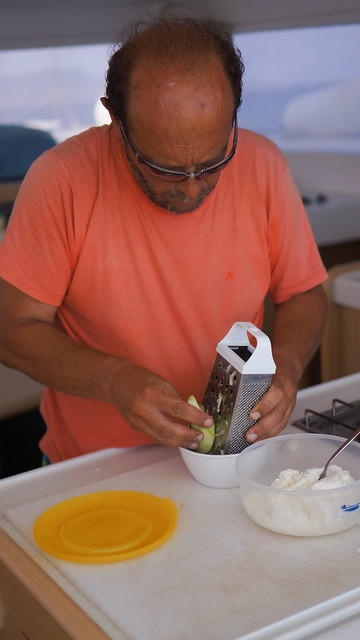 We ate in for the first time that night (or maybe we just had appetizers on the boat? I can’t remember.) I do remember Vassilis making some fantastic tzatziki for us.

Tomorrow after coffee and breakfast we will set sail for Milos.