Early Friday evening, June 28 2013, we left Ios to set sail for a an anchored bay visit between Antiparos and Despotiko. Wikipedia says:

The strait separating Despotiko from Antiparos only has a minimum depth of about 1m, with the intervening islet of Koimitiri. This extreme shallowness of the strait suggests the possibility of a link between Antiparos and Despotiko in former times.

While we love exploring towns on foot, finding restaurants, and climbing hills, it sure is nice to have a periodic break where you are captive on the boat and sharing a bottle of wine and food you prepare as a group. 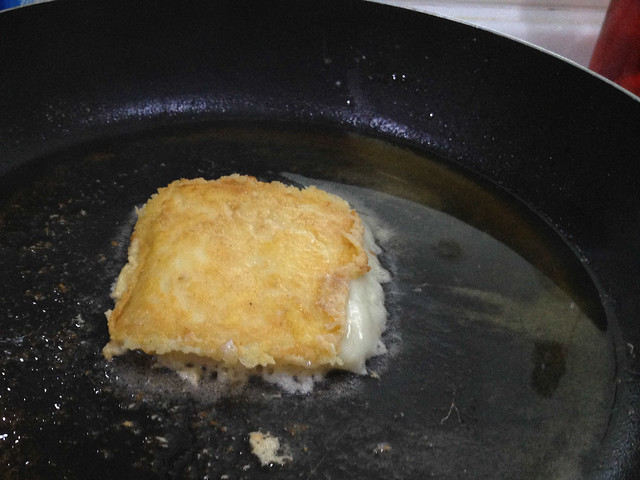 I experimented with a saganaki (fried cheese) recipe with decent success, and we cooked up a tasty dinner of sliced sausage with veggies alongside mashed potatoes. There were beautiful ships in the bay, including a giant slate grey yacht flying the British ensign. Vassilis and the rest of us enjoyed this view over a fine bottle of cheap Greek rosé wine. 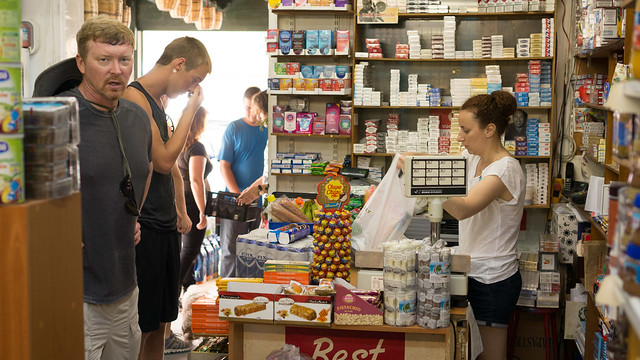 Our next stop after a morning sail for about 4 hours on Saturday was the island of Naxos. This is easily the most built out of the islands we have visited, and it is large with tall mountains (Mt Zeus is over 3,000 ft). Our first stop was a grocery resupply, with the priority being a large flat of Fix beer.

We also dropped into a local souvenir shop that specialized in the local liquor Kitron plus some of the local red wines. Kitron is tasty and the dry variety reminds me of Cointreau. 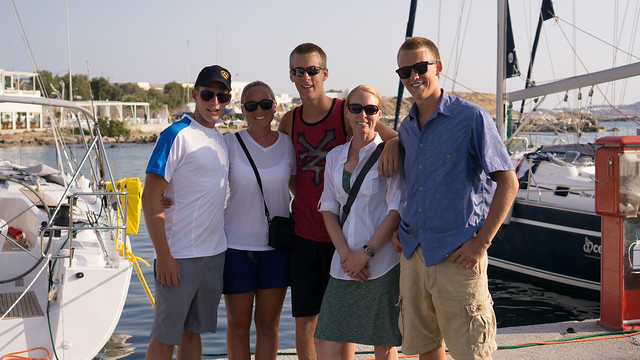 Before dinner we hiked up the hill to the Castro and the Venetian House museum. What a treat this was! For 5€ each we got a private guided tour. 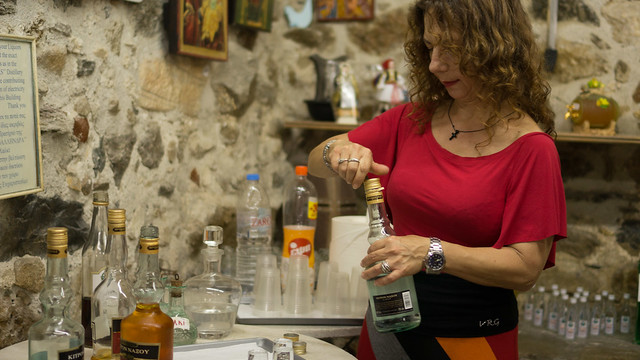 This may sound a bit steep, but our guide was extremely knowledgeable and there was ample spirit tasting at the end. She also gave us a strong dinner recommendation. 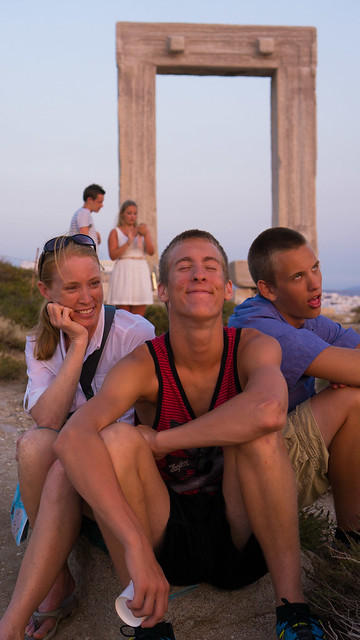 Before dinner was a visit to the Temple of Apollo for a sea-level sunset and more photos. The temple is at the end of a narrow isthmus and offers a great view of the harbor. 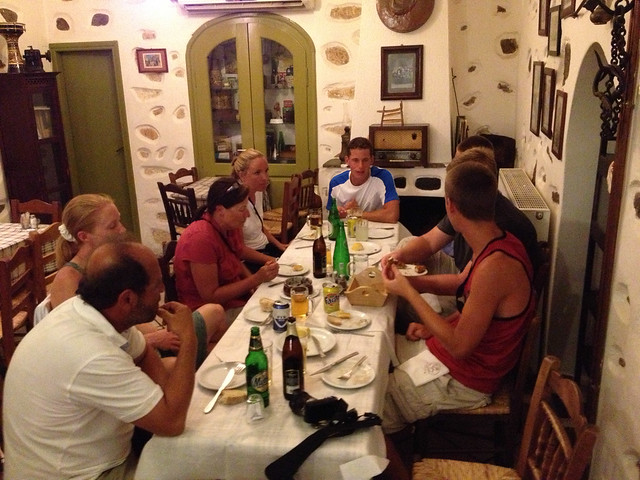 We picked up Vassilis on our way back at the pier then up to the maze that is the town to find our dinner spot, Maro. People were so helpful with directions but we needed Vassilis to guide and translate. I wish we knew enough Greek for simple directions like this. Maro did not disappoint, with highlights such as drunken pig and spaghetti with a big slab of slow-cooked pork. 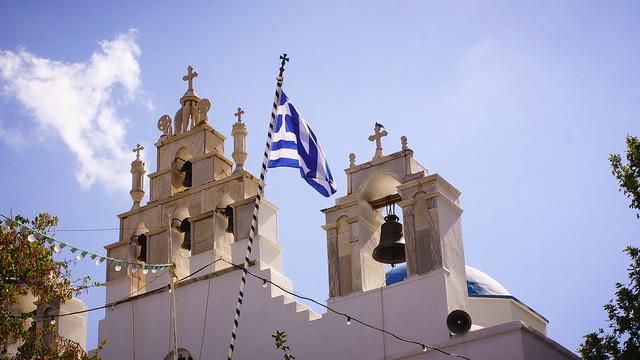 On Sunday in Naxos we needed to find rental cars to explore the island. Dave and I thought we had a good line on 2 cars to rent for 25€ a bit off the main drag to the south of the city, but alas they did not seem in a rush to open. We looped back toward the pier and found more expensive options. Persistence paid off as we found 2 soft top Chevy Matize for 25€ each. Traffic is much more of a pain on Naxos than other towns — this is definitely more urban. We worked our way across the middle of the island to see a cool church in Filoti.

These are sleepy, non-touristy villages with beautiful churches and main streets. We continued on to the coastal town of Moutsouna. 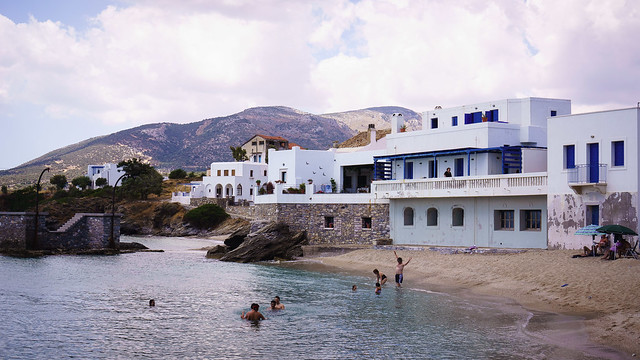 We enjoyed watching some local kids play around, jumping off the pier into the cool water. 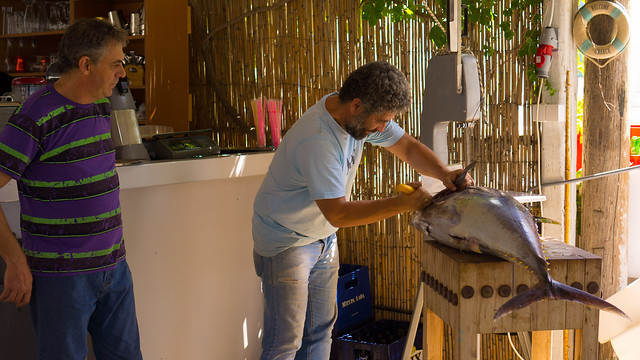 The taverna had just brought in a big yellow fin, using an electric saw to take him apart. We have drinks at the tavern (and complimentary “driving cherries”) but with time running short we drive back across the mountains, wander scenic Apeiranthos, and head back to Naxos.