As long as I've known Chris he has wanted to visit the National Baseball Hall of Fame . We travel to upstate New York most every summer and stay within a 3-hour drive of Cooperstown, so why in the world haven't we gone yet? When we're in New York, we stay for just one or two weeks at Keuka Lake with family and friends and we can't tear ourselves away. This year, however, we are summering at the lake and our West Point trip provided the perfect opportunity for a Hall of Fame visit.

Disclaimer! I am not a baseball fanatic and yet I'm about to review the Cooperstown experience. I know the game of baseball having joyously watched my boys play through the years, but rarely seek out a game on TV. I root for the Cubbies having married into a family of diehard Cubs fans, but don't follow enough to even know the players, record, etc. I know, I'm not worthy. I really do love baseball though. Going to a game - any game at any level from youth to pro - is one of my favorite things to do. The slower pace, the fans, the traditions...I love it all.

Ok, Cooperstown. We arrived mid-morning on a drizzly day. The town itself is charming, showing off older brick buildings with baseball themed stores at every turn. There's little parking on the streets, so we parked at Abner Doubleday Field and walked the couple blocks back to the National Baseball Hall of Fame and Museum. 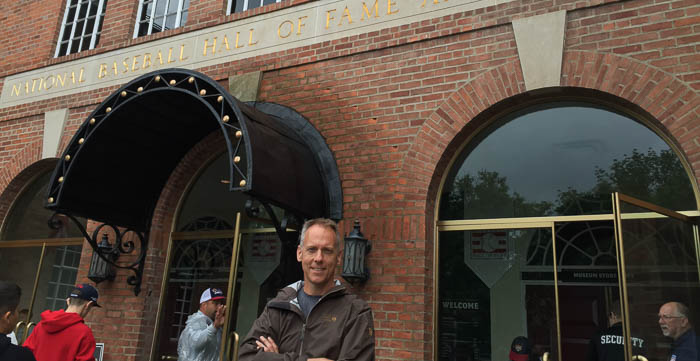 After paying the $23 admission, we joined a brief guided tour of the Hall of Fame plaque gallery. I wandered as our guide talked and immediately stumbled on a plaque that made me laugh out loud. 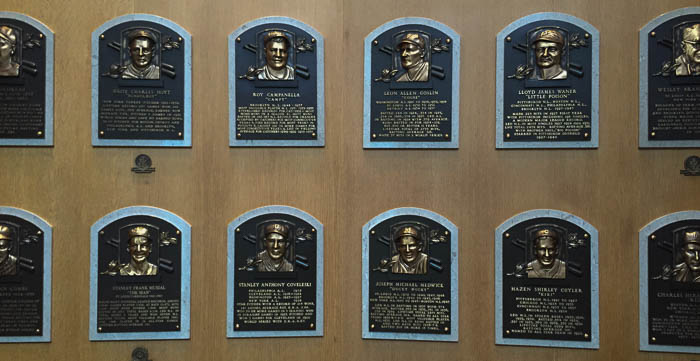 Most people in that section of the hall were drawn to Roy Campanella. Me? KiKi Cuyler. One of our first cats was named after him! All of our cats have been Cubby cats: Cuyler, Wrigley, Sammi (aka Sammy Sosa) and Gabby. The plaque gallery is like a quick-reference guide to favorite baseball legends. Chris browsed quickly during the tour but also came back later for a second look.

I always like to start with an overview movie so we climbed to the second floor for "The Baseball Experience" in the Grandstand Theater. 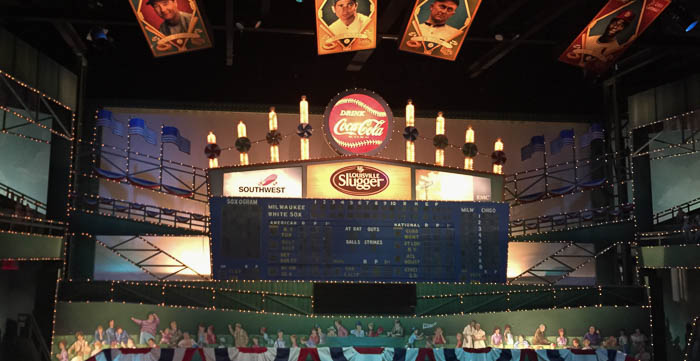 This was pretty cheesy. I guess "campy" would be a kinder word, but the theater and movie could use an update. I'll give them one thing, though: they chose the right version of "Take Me Out to the Ball Game" (Harry Caray's of course). Upon exiting the theater, we walked through baseball history from its 19th century beginnings through present day with special exhibits celebrating Babe Ruth, the Negro Leagues, women in baseball, and Latin American players. 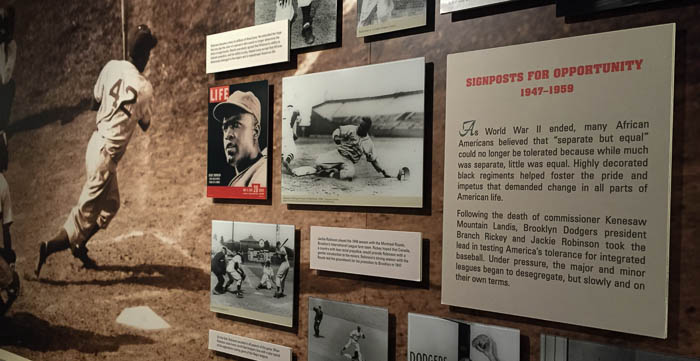 Exhibit dedicated to the Negro Leagues "Pride and Passion: The African-American Baseball Experience"

Chris commented that while the artifacts may be interesting and well-curated, he found the human design lacking. I agreed; it was difficult to get into a flow moving through the diplays. There was so much to take in, I hardly knew where to start.  Still, we found many interesting tidbits to point out to each other. 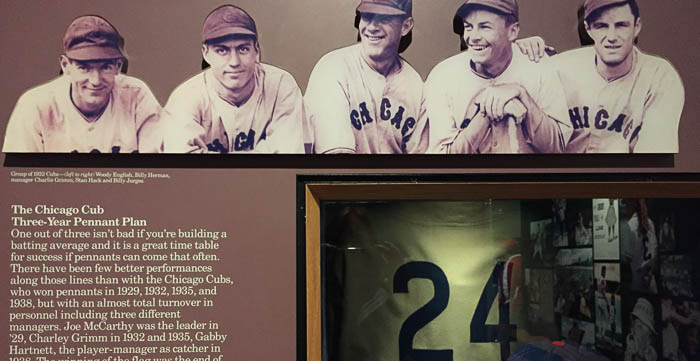 Unique display about the Chicago Cubs, "The Three-Year Pennant Plan"

Design improved on the third floor with the Hank Aaron Gallery and the "One for the Books" display highlighting records and the stories behind them. It was mid-way through this floor though that Chris wryly joked "If I see one more display about the Yankees, I'm gonna throw up". Ha! Be prepared to learn about teams you love AND the teams you hate. 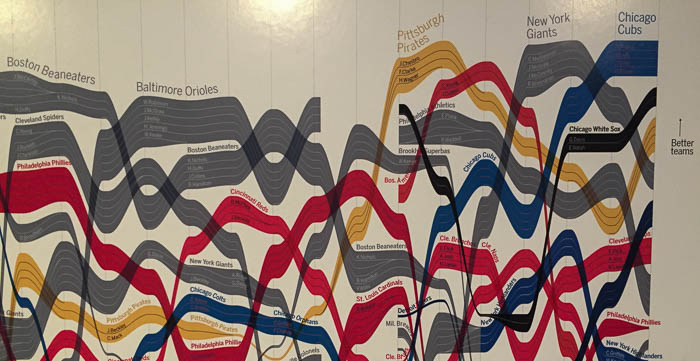 Pictograph showing some of the best years in baseball - go Cubbies!

As we exited the third floor, we were fortunate to see the temporary photography exhibit "Capturing America's Pastime." These photos, along with other art and award-winning photography on the first floor, were my favorite part of the museum: moving images that capture the essence of baseball. 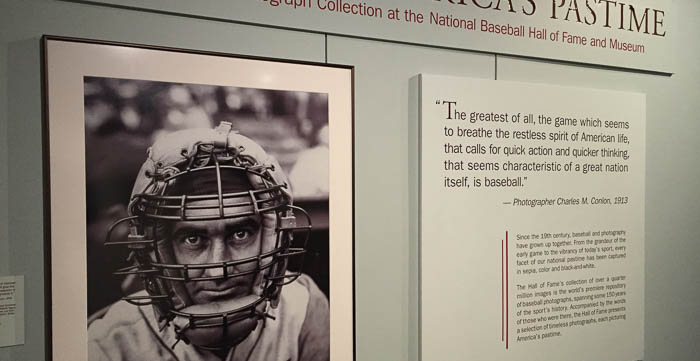 In all, we spent close to three hours in the Hall of Fame and museum; honestly, I could have finished in half the time. My biggest regret was that they didn't have more videos. Baseball is an easy-paced game punctuated with jaw-dropping feats of athleticism. I was drawn to the few highlight reels offered and hungered for more.

Although we wanted to try the Cooperstown Diner for lunch, it was full and we ended up at Mel's at 22 . The change-up worked out just fine. The server was a titch slow and forgetful, but the food was excellent. I am still thinking about my southwestern chicken soup and Chris's garlic pesto fries. Delish. 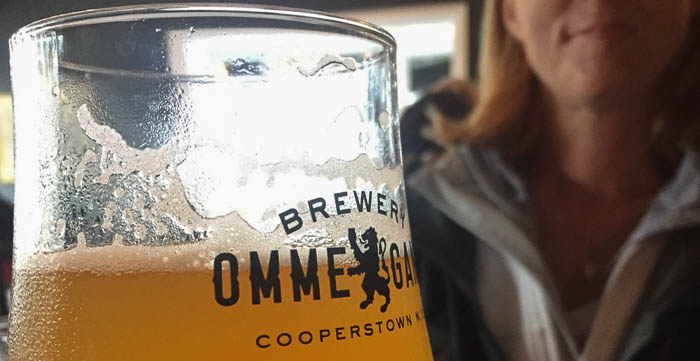 Chris's beer from Mel's at 22, an Ommegang Hennepin

Cooperstown marked the conclusion of the "fun" portion of our trip; all that was left was driving and errands. In just a few short hours, we were gazing once again at our beloved Keuka.