This is our last full day of hiking and program at Philmont. For breakfast, we had the hot skillet scramble. Texture a little odd, but still good and a nice change of pace from cold breakfast every day. The boys were all in great spirits as we left Elkhorn with lots of singing, especially Jacob and Matthew. And Matthew just kept on singing, acting as our very own Pandora, cued up from "Call Me Baby". We saw more of our entourage of buck as we left camp. 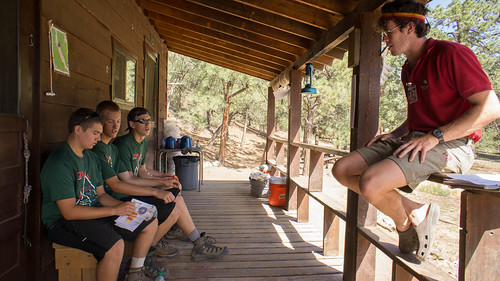 The terrain changed a lot along the way to our program area at Dean Cow. It was much drier, more cactus and many cool rock formations. We absolutely adored Dean Cow and the program staff there. When we mentioned the idea of bush-wacking to the turnaround tomorrow, the lead staffer immediately asked for maps and talked it over in detail with the boys. It was nice to encounter someone with such a positive attitude and who encouraged the boys to take on a final challenge. The rock climbing there was awesome, with twin cliffs named Queen Latifah and Natalie Portman. When asked "How American Are You?", Matthew replies "I’ll name a cliff just so I can say I did Natalie Portman." 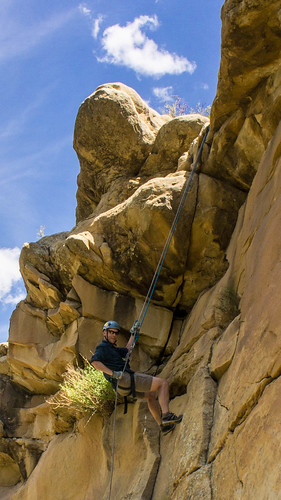 We had a relaxing time bandaging up our feet and resting up before our hike to our last trail camp at Dean Heck. 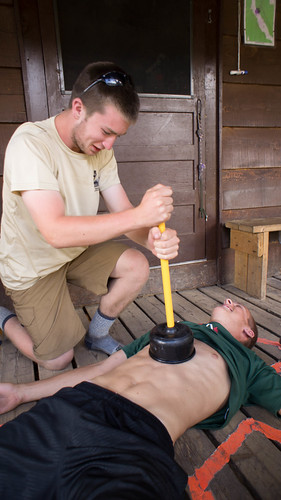 Along the way we saw lots of huge fire ant mounds, many 12-18 inches tall. The terrain was more stark and forbidding overall. Could this be foreshadowing? It rained pretty hard for the last part of the hike to Dean Heck, but stayed warm. We arrived, but weren’t entirely sure we were there. The only designation was a UTM post and the windmill/water buffalo/water tank. We then scouted around and found the best trees to do the bear rope, although not great. We couldn’t get the rope as high as we’d like. This was our only camp without a pre-strung bear line traverse wire. 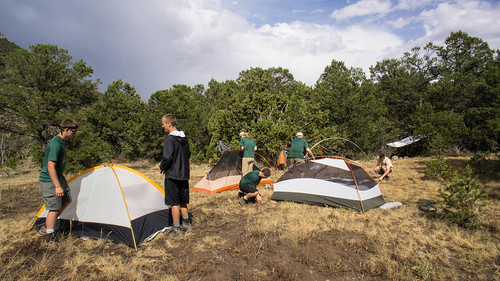 This camp will forever be known as the haunted campsite. After the tents were set up, we all hid under the fly and did final Guia program work led by Matthew. Area seemed even creepier than before due to rain, lightning, a scorpion we found in the meadow, the fire ants, and the 2 dead plus one "I’m not dead yet" rodents in the water buffalo (see photo below). And the windmill that, when turning, alternated between the nails on chalkboard "Scrrrreeeeeeeeeeaaaaaaaa" and the hauntingly mournful "Mmmmmmmmooooooooaaaa". Awesome. We persevered through the extreme humidity and passed the afternoon playing catch with the squeegee frisbee. We then took all of our dinner stuff and ate over at the windmill ruins, which had a rock wall we could sit on fairly comfortably. Pretty nice spot for dinner until the ants found us. After dinner, we went back under the dining fly for sharing and final talk. I did a few of my card tricks. Then Phil did one that had us in stitches. Just as we went to bed, it started to rain and the wind picked up, literally howling through the canyon, which set the windmill going. Creepy. Matthew says "I’m going to die. I’m serious. I am not going to make it through the night." Kyle assured us that he would protect us - as our chaplain, he was trained at base camp to fend off were-rats. Thank you Kyle. Thank you. 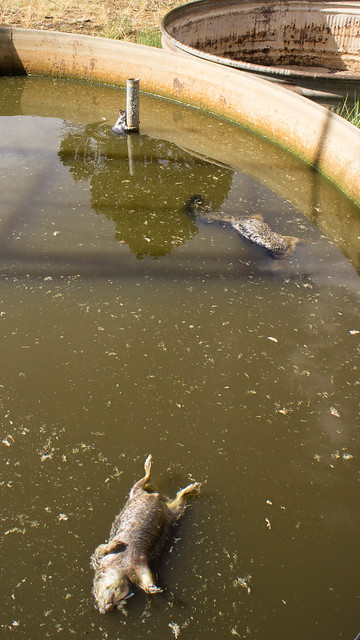 The poor giant rat hanging on to the pipe didn't survive the night. We thought we heard him calling out to us during the night.