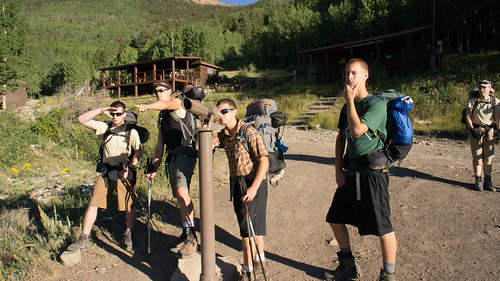 With a final close-up look at Baldy and farewell to the Baldy Town kitten, our crew departed on a downhill descent to Pueblano where some spar pole climbing awaits us. 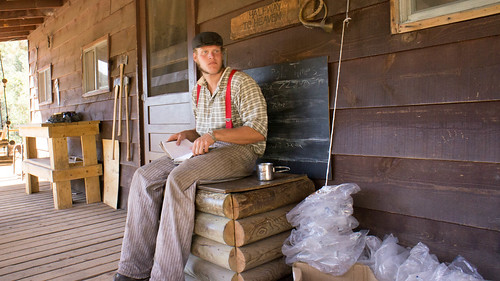 We had a fantastic porch talk at Pueblano with a friendly staff that stayed in character (much like the Black Mountain Camp staff) and really engaged the boys. In fact the boys were recruited to pull tape off food supply boxes and then break them down. They earned 8 pudding cups for their trouble. After that they played chess and cards on the porch. Julie and I took a side hike up to Wilson Mesa which is across the creek and up a cliff-side from Pueblano. While it was not as stunningly beautiful as advertised, there was a pretty view of Baldy across a dry lake meadow. It was pretty easy hike – not nearly as steep as Urraca but rocky most of the way. 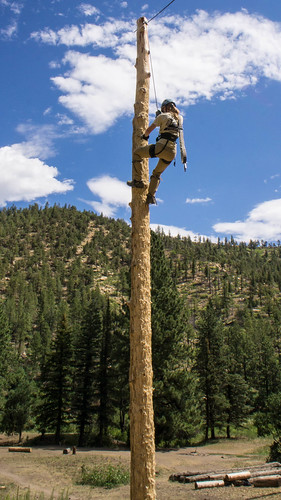 We met two sister crews from Beaverton, OR (Sunset high school) while spar pole climbing. Julie, Jacob and I climbed the pole (Matthew could not due to his recent elbow surgery). Jacob got mildly chastised by staff for a math-related PG-13 joke he made while climbing. Funny thing was, the comment was “you wouldn’t say that in front of your mother” but of course Julie was right there listening in and laughing. 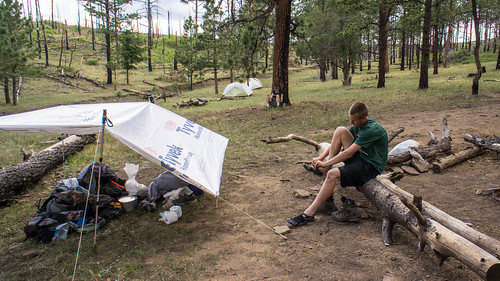 Next we set off for our trail camp at Elkhorn. Rain was threatening towards end of hike, so we were pushing it and flying along. Once we hit camp, we hurriedly set up tents and dining fly. Weather cleared and had a very relaxing afternoon reading and playing cards (hearts). There was a group of about 7-8 bucks that kept orbiting our camp and the watering hole. After dinner, we played Werewolf then somehow got on the subject of zombies. Jacob says: “If I had to face a zombie horde, I’d want you guys and some people with guns.” Derek then says: “Uh…what about your girlfriend?” to which Jacob responds “Perfect! Two birds with one stone. My girlfriend is great with guns.” The moon was incredible – almost full. We all walked up the hill before bed to look at the moon and planets. This was by far our favorite camp of the week.