Chris and I spent Thanksgiving in Melbourne, Florida again; it's always a treat to visit!  Chris has an abundance of relatives in the area (mom, sister, nieces, cousin, great-nephew, etc.) and our sons Jacob and Matthew flew in, so our cup runneth over with family fun. The boys flew back on Sunday as most Thanksgiving travelers do, but our current work-from-anywhere flexibility provided an opportunity to extend our trip by a few days, secure cheaper airfare, avoid holiday airport madness, and sneak in a trip to Fort Lauderdale.

Why Fort Lauderdale? Lynne (Chris’s mom) has timeshare points, did a quick search for availability within driving distance, and found one night at the Fort Lauderdale Beach Resort. Sold! We spent less than 24 hours in town, arriving at 11am and leaving the next morning by 10am, but it was well worth the 2 1/2 hour drive. Chris chose our two main sightseeing stops, the historic Stranahan House and a river cruise on the Carrie B and I couldn’t imagine a better introduction to the city. The Stranahan House highlighted Fort Lauderdale’s humble beginnings, while the river cruise showed just how far the city has come - the outrageous multi-million dollar homes and yachts have to be seen to be believed! Throw in a few restaurants and a run through Hugh Taylor Birch State Park, and we had ourselves a mighty fine time.

Any discussion of city history will surely mention the Stranahans; Frank and Ivy Stranahan are considered the founders of Fort Lauderdale. Frank arrived in 1893 to operate a camp and ferry at Tarpon Bend on the New River and went on to establish a trading post and trusted business relationship with the local Seminole Indians. Here’s one story that stuck in my brain: The Seminole would bring Frank alligator eggs which he would incubate in warm sand in front of the trading post. When the eggs hatched, he’d place them in a wood cracker box, nail the lid on tight, and ship them north to Jacksonville to be sold to tourists. Poor gators…and poor tourists if those gators thrived! 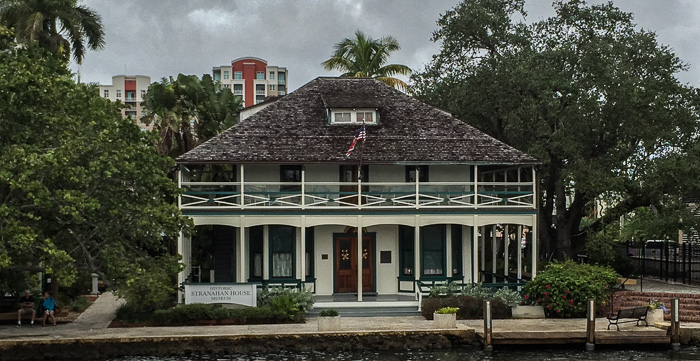 Ivy came to town in 1899 to teach 9 students in a one-room schoolhouse. As a beautiful young woman (and the only single woman in the area!) she caught Frank’s eye, he proposed, and they married in 1900. Ivy gave up her paid teaching job, but turned her time and energy to teaching Seminole children and leading civic and social causes. Frank’s business and civic presence expanded along with the town, adding a general store and bank, and a community hall above the trading post. Life was good but hard times hit. Florida’s land boom stalled, two devastating hurricanes hit in 1926 and 1928, and the stock market suffered a mini-crash in March 1929. Heavily in debt, depressed, and likely suffering from cancer, Frank tied weights to himself and jumped in the New River in May 1929. Tragic.

Ivy struggled after Frank’s suicide but survived by renting her home for use as a boarding house and restaurant. Through it all, she remained a stalwart member of the community becoming president of the local suffrage association, successfully lobbying for Florida’s homestead exemption law, establishing Friends of the Seminoles and local chapters of Red Cross and the Campfire Girls, and…I don’t know what else but I’m sure there’s more. Incredible woman!

Our engaging tour lasted about one hour and focused on Frank, Ivy, and Fort Lauderdale’s early history. The carefully restored two-story home was built in 1901 of Dade County pine and is furnished with pieces from the early 1900s, only few of which belonged to the Stranahans. The tour requires climbing one flight of stairs; the website states tour guides can make accommodation if needed.

We were told that Frank Stranahan predicted Fort Lauderdale’s explosive development but people laughed at him. Although Frank had vision, I doubt he could have imagined the Fort Lauderdale of today: high-rise condos, upscale restaurants and shops, multi-million dollar homes, and lavish yachts, all centered around a series of dredged peninsulas dubbed the “Venice of America”. 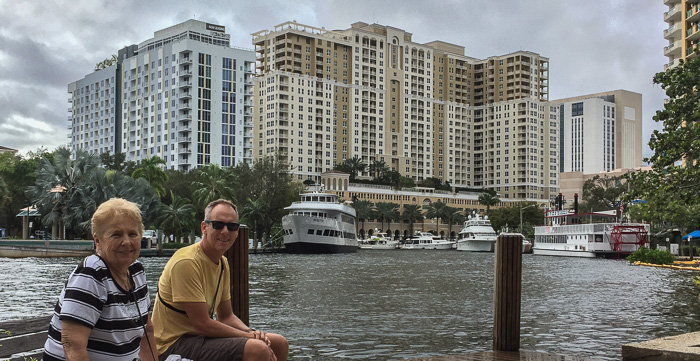 Lynne and Chris sitting by the New River in Fort Lauderdale. The Carrie B river cruise boat is at the far right.

I think my jaw hit the ground about 2 dozen times during our 1 1/2 hour river tour on the Carrie B. I was immediately impressed with the homes and yachts along the New River but holy mackerel, those were just a warm-up for what we’d find in the Atlantic Intracoastal Waterway and Port Everglades. Our tour guide kept us entertained with fun facts reminiscent of “Lifestyles of the Rich and Famous”. I’ve been confronted with wealth before but this blew my mind, perhaps due to the focus on operating costs. It’s one thing to say that a yacht cost $315 million, but quite another to know it takes $500,000 just to fill the fuel tanks. I couldn’t afford the boat if it was given to me! One home’s property taxes are over $400,000. Annually. Are you kidding me? 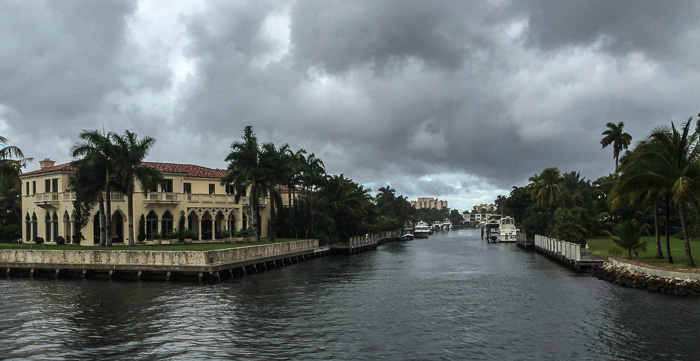 Maybe I’m too easy to please, but I found the cruise captivating start to finish. The wind and rain threatened to dampen my enthusiasm, especially when the heavens opened as we pulled in but thankfully the crew invited us to remain on board until the storm passed. Much appreciated! The Carrie B herself was serviceable but not fancy by any stretch. If she’s not to your liking, there are plenty of other options. Our cousins enjoyed their ride on the Water Taxi; although not billed as a “tour”, the captain provided a colorful running commentary.

Lovely surprise! Hugh Taylor Birch State Park is a 180-acre wooded haven situated on a barrier island between the Atlantic Ocean and the Intracoastal Waterway. Just minutes from our timeshare, it was the perfect setting for a morning run. Check that - not too early. We jogged over at 7:55am to find the gate closed until 8am. We loitered with a line of cars waiting to get in, paid our $4 ($2 per pedestrian), and had a brief chat with the ranger before setting off. Between the road, trails, and beach, we cobbled together a 3-mile run. 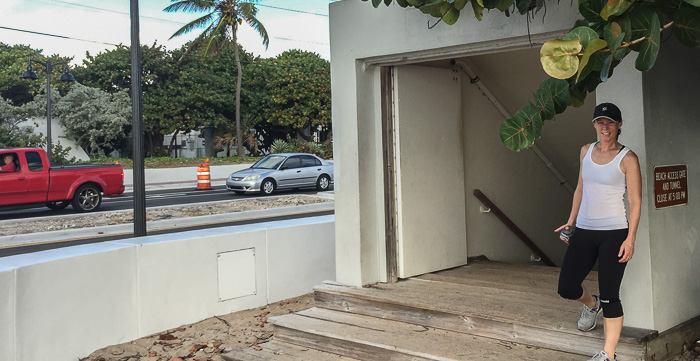 As this park map details, there’s a beach access tunnel at the south end of the park. It looks like you can access the park through the tunnel and avoid the pedestrian fee, but we didn’t mind paying a nominal amount to support the park. If we come back, I’d love to take in a ranger guided walk or live animal presentation.

Our condo had a full kitchen, but did we cook? Nope. We were lazy and ate out all three meals. The eating extravaganza started with lunch at the Royal Pig Pub & Kitchen conveniently located on Las Olas Blvd between our parking garage and the Stranahan House. Excellent choice; Chris and I shared a warm spinach salad and a pulled pork sandwich topped with coleslaw and fried pickles (yum). We switched to Italian for dinner, walking from our condo to Franco & Vinny’s Pizza Shack. Popular place and another win. No pizza for us; we indulged with stuffed shells and a fresh, delicate pasta alfredo (double yum). For breakfast we gambled on Mom’s Kitchen. What can I say…they can’t all be winners. The prices were reasonable and the wait staff prompt and polite, but the food was average.

One final note: The 1960 film Where the Boys Are instantly transformed Fort Lauderdale into the college spring break destination. Those crazy kids wore out their welcome though, and in the mid–1980s the city passed strict laws to discourage the party crowd. By 2006, spring break numbers had dropped from 350,000 to about 10,000. Ha! Fort Lauderdale leveled up. Smooth move.