What a blast! Over the course of eight hours, we swam, ziplined, snorkeled, kayaked, and rappelled in four different cenotes. Chris and I were the old-timers of the group with most folks in their 20s, but we kept up with our young counterparts, jumping off cliffs and attempting back-flips off the zipline. 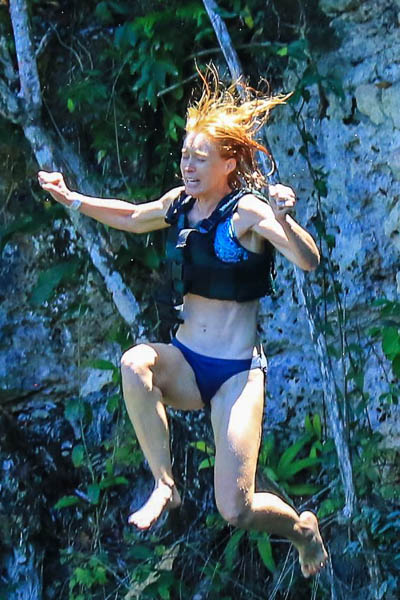 I almost chickened out on this cliff jump, and clearly regretted my decision on the way down! Photo by Jaime of Xenotes Oasis Maya.

What are cenotes? Well, millions of years ago the entire Yucatan peninsula was under water and when the sea level dropped, a coral reef barrier was exposed. When the coral died, it formed a limestone foundation that would eventually become covered in jungle. Since limestone is porous, rain water gradually filtered through the rock to form underground rivers, tunnels, and caverns. A cenote is simply a sink hole, a place where the roof of a cave or tunnel has collapsed exposing the water below. 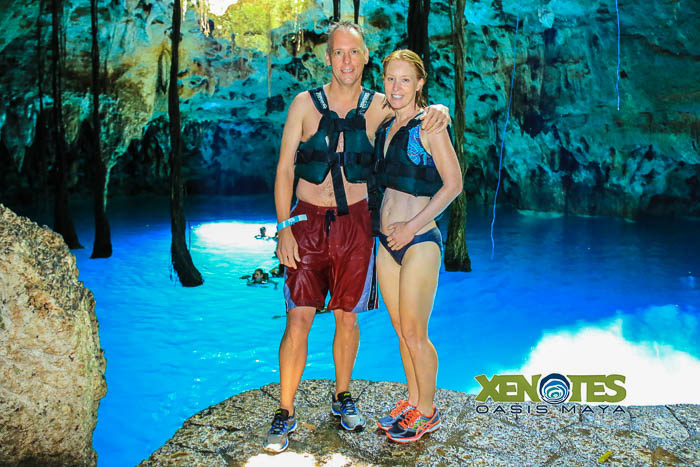 Chris and Julie in the Lu'um cenote. You can see dangling tree roots behind us, all of which abruptly stop at the waterline. Photo by Jaime of Xenotes Oasis Maya.

While many factors can cause a collapse, trees are often the culprit. Our guide Yosua explained that tree roots delve deep into the earth seeking moisture. A tree grows slowly as roots reach down, but once tendrils hit the water table below, the tree will quickly gain size and mass and could eventually break through the earth creating an opening into the cavern below. It’s a marvel to swim in a cavern with intertwined strands of roots that stretch from high above to the water below, but then stop abruptly at the water-line as if neatly trimmed with shears. There’s no need for roots to grow further; they simply stop once they reach a water source.

Cenotes are historically classified into four types: Jug (with a narrower opening than the water below), Cylinder (with vertical walls), Basin (with shallow water), and Cave (with a horizontal entrance with dry sections). On our excursion, we visited four different cenotes, but they were described a bit differently as Open, Semi-Open, Cavern, and Ancient.

“Cenote” is derived from the Mayan word “dz’onot” which means “cave with water.” These sink holes were important to the Maya for both practical and religious reasons. Mayan cities were always located near cenotes since they provided the sole year-round source of freshwater on the Yucatan Peninsula. On a spiritual level, the Maya believed that cenotes were gateways to the underworld. Archaeologists have discovered sacred cenotes like the Well of Sacrifices at Chichén Itzá in which people and objects were ritually cast into the water. 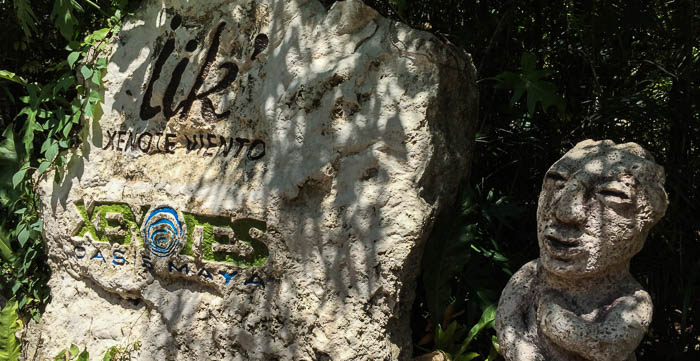 A statue of the lik' Alux

Before entering our first cenote, Yosua asked us to form a circle and join him in asking the Aluxob for permission and safe passage through each cenote. Alux are small sprites or spirits that the Maya believed to be spirits of their ancestors or of the land itself. Yosua called upon the Alux of each cenote we’d visit: Káa’k’ (Fire), Lu’um (Earth), lik’ (Wind), and Ha’ (Water).

Yosua has been swimming in cenotes since he was young, long before they became tourist attractions with steep fees and limited access. Some cenotes are open to the public (for a price) but these four are privately owned and operated for exclusive use. 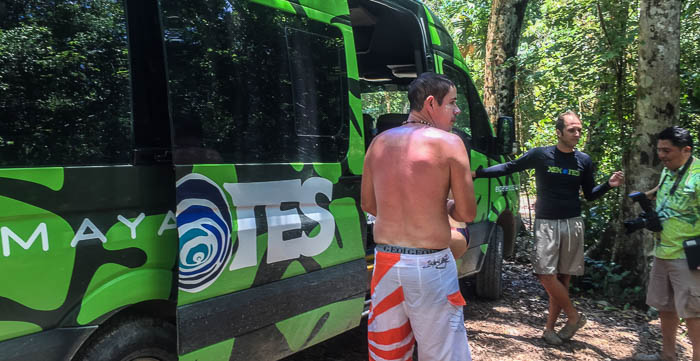 Loading our colorful van. In the far right, that's Yosua (or guide) and Jaime (our photographer).

Our Xenotes Oasis Maya tour began at 9am when Yosua picked us up in a 20-passenger van. We collected all other passengers by 9:35, picked up the photographer along the way, and arrived at the first cenote at 10:30. 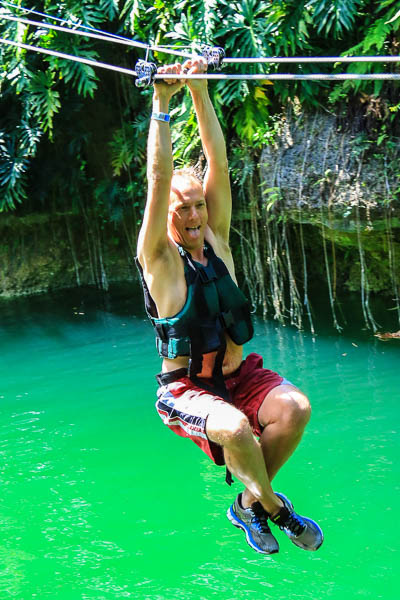 Chris zip-lining at the Káa'k' cenote. Photo by Jaime of Xenotes Oasis Maya.

After showering and applying complimentary, bio-friendly sunscreen, we donned mandatory life jackets, ziplined into the water, swam through the cenote (finding shell fossils in the vertical walls), jumped from a 15-foot cliff, and walked back through the jungle. 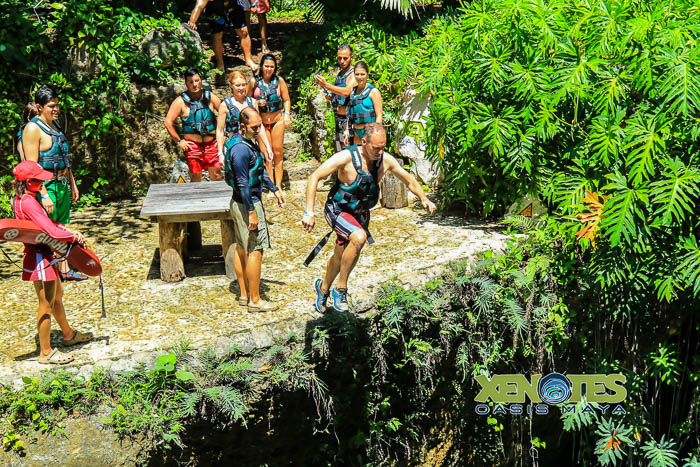 Chris jumping off a cliff at Káa'k'. Photo by Jaime of Xenotes Oasis Maya.

Along the walk, Yosua pointed out various palm trees (many that grow just 1 meter every 10 years), orchids, and gum trees. We paused at a gum tree as Yosua explained more, pointing out the machete marks where sap had been extracted. Both Chris and I sampled the natural gum but tossed it after a few minutes since Cardboard isn’t high on our list of flavors to savor (!).

At this point we were offered our first food and drink for the day, a welcome treat. Since it was after 11am, we were grateful for our hearty pre-trip breakfast and the snacks and bottled water we’d tucked into our backpack. 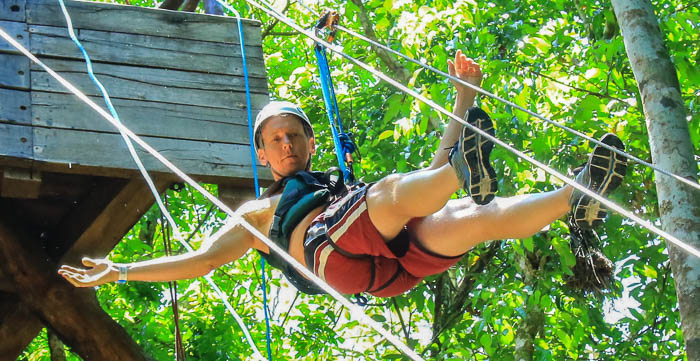 No hands required on the assisted descent into Lu'um cenote. Photo by Jaime of Xenotes Oasis Maya.

Our favorite cenote by far!! The rappel wasn’t really a rappel, but more of a slow, assisted descent into a cave cenote. I might have been disappointed had the cenote been less spectacular, but as it was, I was glad to simply be lowered as I soaked in the magnificent scene unfolding below. 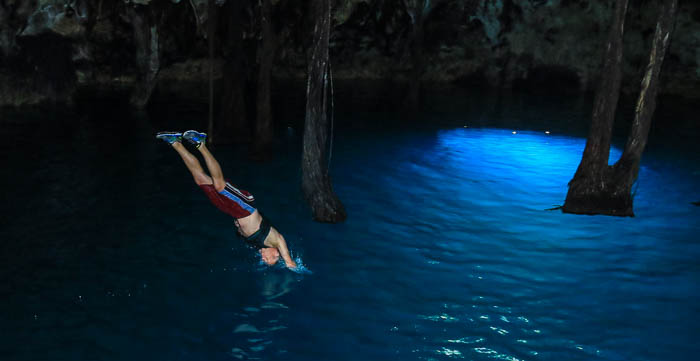 The underwater floor of this cave cenote is bare limestone, one reason for the water’s clarity and unusually brilliant blue color. Many folks seemed freaked out by the seemingly hundreds of bats and cave swallows dotting the stalactites, ceiling, and walls, but Chris and I were fascinated and explored widely with Catfish and tiny Tetra swimming alongside. Although given a generous 45 minutes inside Lu’um, I was reluctant to leave. 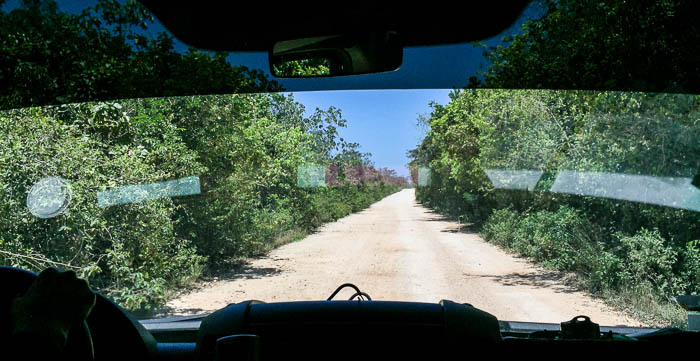 A typical road between cenotes. It was bumpier than it looks!

Backing up, the drive from Káa’k’ to Lu’um meandered along rough and winding roads. Front row seating proved to be ideal both to stave off motion sickness, and to gain a clear view of thousands of butterflies flitting about the road. Lifejackets were again mandatory, but this time, our photographer Jaime implored us to shake the jackets before putting them on to rid them of spiders. We all bustled about, selecting and snapping in, but things came to a halt when one guy found a scorpion clinging to his. OMG! From that point forward, our half-hearted shakes became vigorous flapping coupled with eagle-eyed inspections. 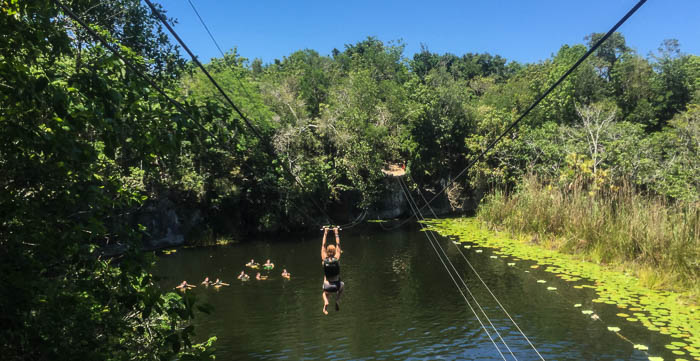 Zip-lining in the lik' cenote

Lik’ is a long, open cenote with two ziplines side-by-side. We dropped off one zipline, swam to the other side, jumped off a 20-foot cliff (scary - I almost chickened out!), attempted a backflip off the second zipline (entertaining to watch everyone’s attempts and awkward landings), swam to shore, and walked back for a relaxing lunch and conversation with our table-mates. 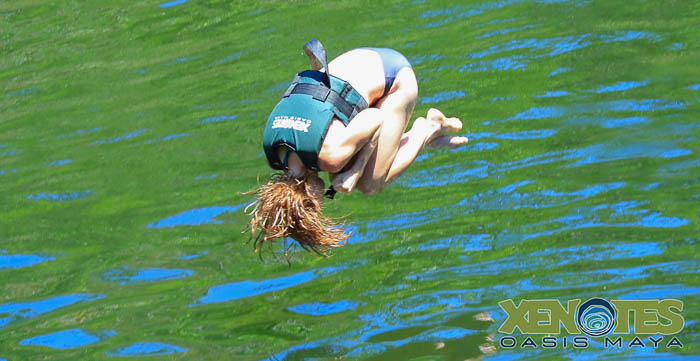 Julie attempting a backflip off the ziplane. Not. gonna. make. it. Photo by Jaime of Xenotes Oasis Maya.

As we ate, Jaime wandered about showing each group their photos. Pricing varied depending on group size, but Chris and I could purchase ours for $79 which included stock images (the same for everyone) plus photos of me and Chris throughout the day. We decided to purchase the flash drive at the end of the day since we didn’t bring a waterproof camera and had few photos of our own, plus Jaime had captured fun moments. 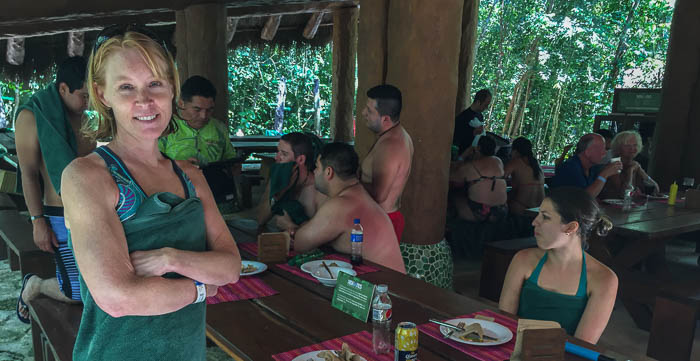 Lunch time! That's Jaime in then background showing a group their photos.

As we were wrapping up, Yosua gave a low-key pitch of souvenirs for purchase including shirts, bags, hats, and Alux figurines. 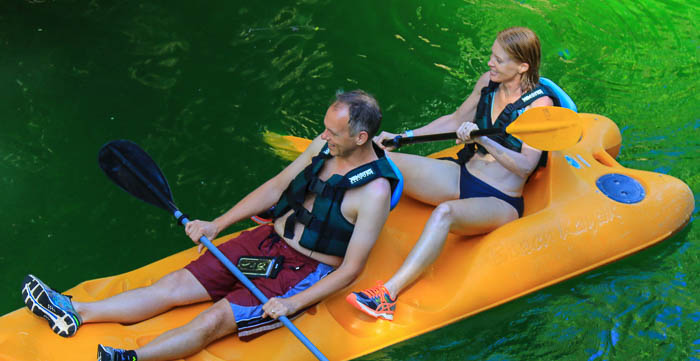 Jaime took a pic just as we noticed baby ducks ahead. Photo by Jaime of Xenotes Oasis Maya.

We snorkeled first but with precious little to see, I could have skipped it. The kayaking, however, was a delight. We found coral, shell fossils, snails, baby ducks, and dragonflies (which Yosua called fireflies) while gliding through narrow channels with near-vertical walls. 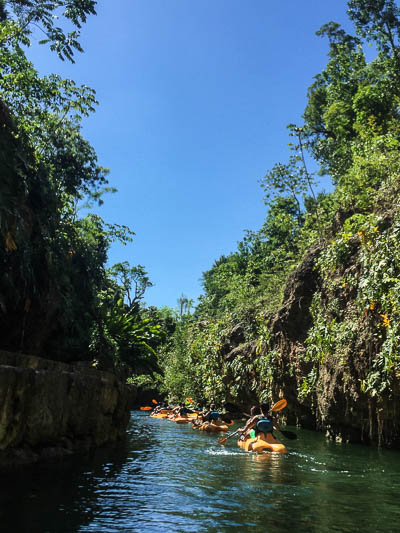 Kayaking in the Ha' cenote.

After changing into dry clothes and purchasing photos, we loaded up and struck for home. Note: Two parties didn’t have enough cash on-hand so we stopped at an office about halfway back to pay with a credit card.

And that was that. An active day, but not nearly as exhausting as our Chichén Itzá tour. The refreshing water and mix of activities served to break up the day and repeatedly rejuvenate. A few more logistical notes: 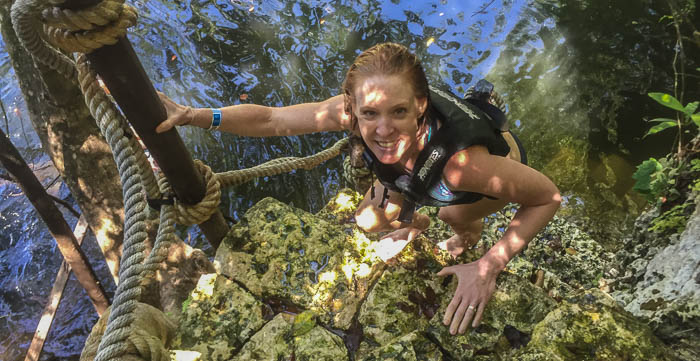 We went shoeless just once in the lik' cenote (Yosua said we'd be fine); it was nice to be freed from tennies. 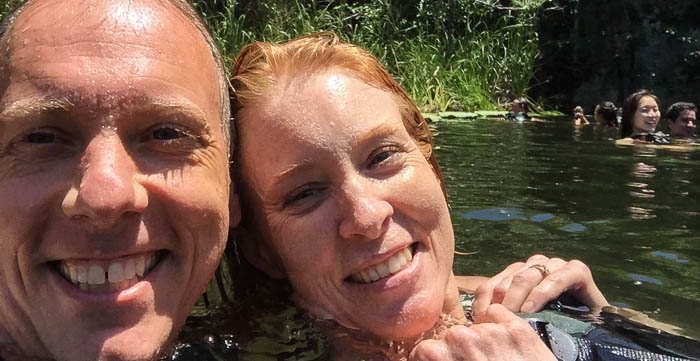 It was fun to use our own camera at the last couple cenotes.

We were the first to be dropped off at 5:10pm; the last likely reached their hotels by 5:30pm. It was a full 8-hour day but we loved every minute. If you’re in Cancun, visit a cenote! Our tour cost $202 for the two of us, but if you don’t want to spend that much, there are hundreds of cenotes dotting the Yucatan Peninsula, many accessible to the general public.