Looking for a fun trip? VISIT NEW ORLEANS DURING MARDI GRAS!! Sorry for yelling but I’m so jazzed, all-caps are justified.

If you’re like me, you hear “New Orleans” and “Mardi Gras” and think excess, drunken depravity, and partial nudity. Yes that happens, and if you want that experience I’m sure you can find it in spades. We strolled Bourbon Street at noon on a Sunday two days before Mardi Gras and meandered past two topless women (one getting her breasts painted), a guy in a half-backless crotch piece and not much more, and dozens upon dozens with “walking around drinks” thanks to New Orleans’ liberal open container policy. It was a fairly restrained and lighthearted French Quarter, teasing us with a nudge-nudge-wink-wink but easing into the big event; imagine what it’s like on the final night of MardiGras! 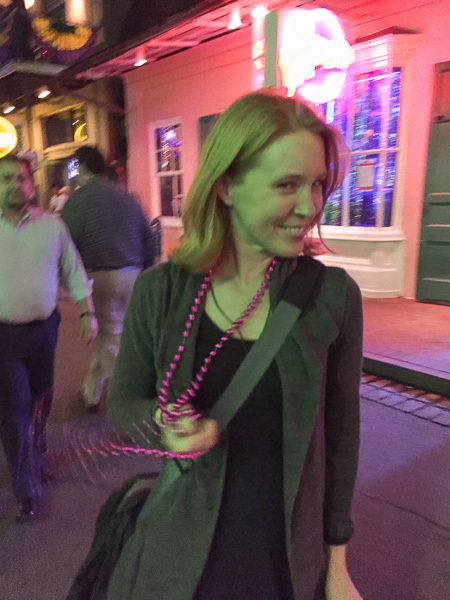 YES my beads were tossed from a balcony in the French Quarter, and NO I didn't do anything R-rated to get them!!

So the debauchery…it’s there. But that’s not Mardi Gras. Or rather, that’s not all there is to Mardi Gras. When you find out what Mardi Gras is and experience it first-hand, you might be smitten. As for me, I’m in love. I visited New Orleans for the first time and the place knocked me out of my socks. What a city! When I return - and I will return - it’ll be tough to top this visit. For a first-timer, I had a near perfect set-up: 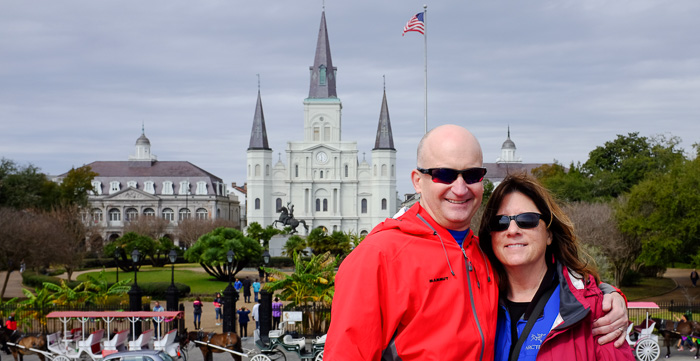 Jack and Anne in Washington Artillery Park across from Jackson Square 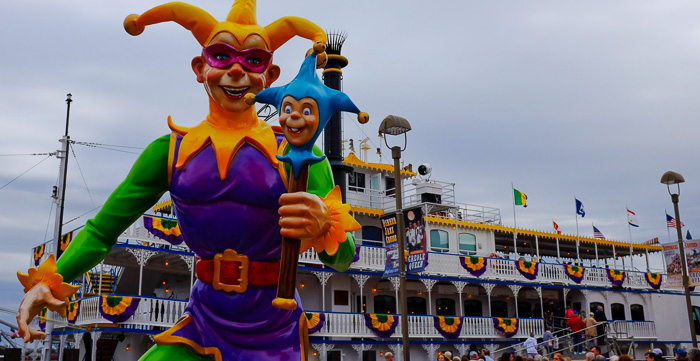 In our 5 1/2 days, we explored the French Quarter, listened to sweet jazz at Preservation Hall, joined two walking tours, rode the Creole Queen out to Chalmette Battlefield, spent a full day at the National WWII Museum, toured Mardi Gras World, saw 5 parades (!), and sampled a dizzying array of delectable foods. I’ll blog about it all and the narrative will play out over five articles. This city is so uniquely interesting with rich culture and traditions, I’m not sure I can do it justice. I’ll do my best, but know that I’m scratching the surface; there are layers upon layers to discover. Do yourself a favor: visit New Orleans and see for yourself!

To start things off, how about a brief primer on Mardi Gras?

I’ve been throwing the term “Mardi Gras” around with wild abandon and like many, have been using it incorrectly. Here’s the skinny. It’s complicated (perhaps only for a non-Catholic?) so bear with me: 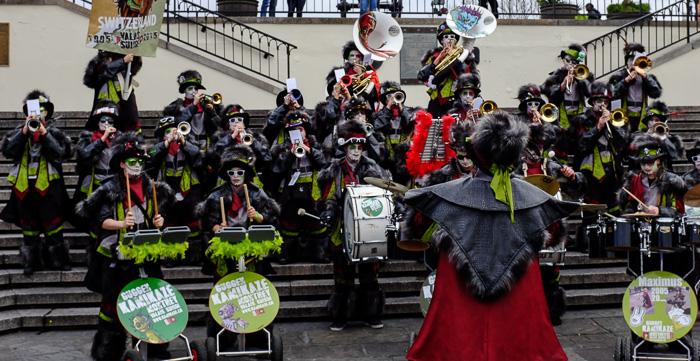 One of many festive bands in town for Carnival

This year Carnival had a short season, running January 6th through February 9th. Technically, Chris and I visited New Orleans during Carnival and didn’t stay through Mardi Gras (Fat Tuesday). While we’re talking “Gras”, a couple other days are unique to New Orleans:

Rex? Endymion? New Orleans has a vocabulary all its own.

According to Arthur Hardy’s Mardi Gras Guide, Mardi Gras is a party the city throws for itself. And how! The main event is on Fat Tuesday of course, but the weeks leading up are filled with events like Family Gras, the King Cake Festival, Samedi Gras, the Lundi Gras Festival, Mardi Gras balls, and parades - lots and lots of parades. 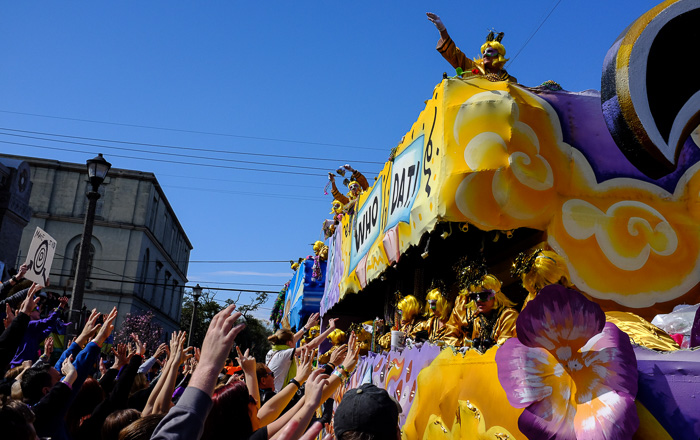 Just one of 36 colorful floats in the Iris parade

This year there were 70 parades held in and around New Orleans during Carnival. Worried about French Quarter risqué behavior? Traditional large float parades were banned from the Quarter in 1973 when deemed too big for the narrow streets, so only a half-dozen smaller parades run through the area. All the biggies roll elsewhere, are family-friendly, and SO. MUCH. FUN. I saw my first two parades on the same night and by the end, I thought my face might break from grinning so much. By the end of Endymion (our 5th parade in as many days) my throat was tight and voice husky from yelling my head off begging for beads and trinkets. I’ve been to plenty of parades in my day, but these are like no other. Seriously. They’re so special, I’ll write about them separately; consider that Part 2 of this article.

New Orleans has celebrated Mardi Gras since the 1700s and while the event has grown and changed through the years, traditions hold strong. In the early 18th century, masks were used as an end-around to break out of strict social classes, if only for a few hours while attending a Bal Masque (masked ball). Hundreds of masked balls are still held during Carnival and most are private, invitation-only formal affairs hosted by Carnival organizations known as “krewes”. I certainly wasn’t invited to one! 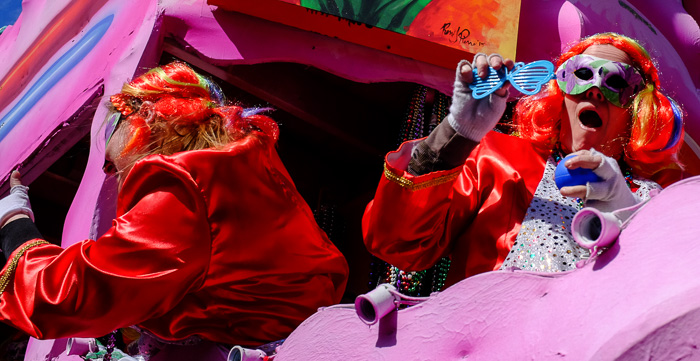 Masking occurs outside of balls and parties, mostly on Fat Tuesday (the one day that street masking is legal) and in parades. In fact, float riders are required to wear masks, perhaps so beads and other parade goodies are gifted by mysterious strangers.

While New Orleans first documented parade occurred in 1837, the genesis of “krewes” came 20 years later with the formation of The Mistick Krewe of Comus. Krewes form and fold so numbers vary, but there are currently 70 krewes whose driving mission is to put on a Mardi Gras parade or ball. To me, they seem like elaborate social clubs with year-round member events and charitable activities. Mardi Gras has no overall coordinating body so each krewe operates independently, recruits its own members, determines the theme for its parade and floats, and selects their royal court (a king, queen, maids, or dukes). 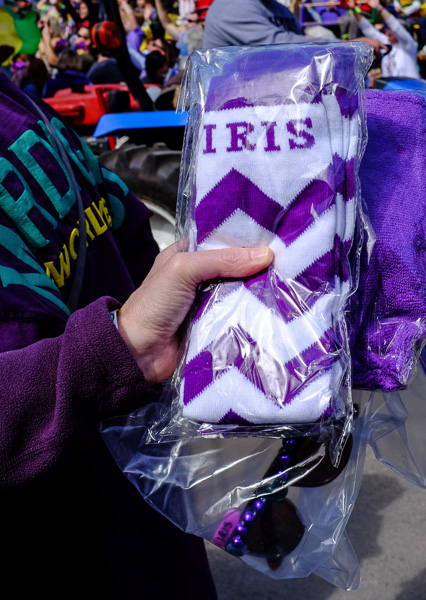 Ooooh, great throws! The folks next to us snagged these top-quality goodies from a friend riding in the Krewe of Iris parade.

Members have to pay annual dues that range from under $100 and into the thousands. They also pay for their own “throws”, the beads, doubloons, cups, and other gifts tossed to crowds begging “Throw me something, mister!”. Does it sound a little crazy to pay to ride a float and give stuff away? It’s a special kind of crazy and if I lived in New Orleans, I’d want in. One rider told us that being on a float is like being a rock star for four hours; another said her krewe has a 5-year wait list to join. Incredible!

Not everyone can join a krewe since many are both expensive and invitation-only, but they were particularly out of reach for the black community a hundred years ago when racism and segregation had a firm hold. Black neighborhoods created their own Carnival tradition forming Mardi Gras Indian tribes to honor Native American Indians for their strength and for helping and accepting black slaves who sought freedom. It was once commonplace to see tribes fight in the streets with rival gangs, but Chief Allison “Tootie” Montana admonished, “Stop fighting with your guns, and begin fighting with your suits”. Now groups of black men work for an entire year hand-sewing elaborate beaded and feathered Indian suits. Activities are shrouded in secrecy with parade times and routes kept under wraps and costumes created behind closed doors. After reading Nine Lives by Dan Baum I so wanted to see a Mardi Grad Indian parade and visit the House of Dance and Feathers, but it wasn’t to be. Next time!

What would you think if you were enjoying an evening parade, when suddenly a float moved past revealing a guy with a propane tank strapped to his back and a flaming torch just above his head? How about thirty guys at once? And all thirty dancing and twirling their torches for tips? I quickly bounced from incomprehension (propane tanks? open flame?), to startled surprise, to fascination and wonder. 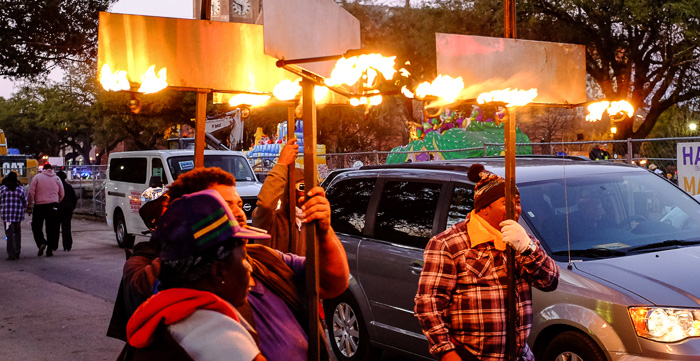 A few friendly flambeaux, getting ready for the Babylon parade

These are flambeaux and they’ve been a part of New Orleans parades since 1857. Before electricity, flambeaux were an essential part of any night parade, guiding the way and illuminating both the parade and spectators alike. Though no longer simple pine tar rags on sticks, flambeaux still romantically light up the night in a way that neon and LEDs can’t match. Many adults remember chucking coins as a kid trying to hit a torch’s metal backsplash, resulting in a satisfying “plink” for the kid and a tip for the flambeau-carrier.

The official colors of Mardi Gras were chosen by Rex in 1872: purple stands for justice, green for faith, and gold for power. You’ll see the colors absolutely everywhere during Mardi Gras, even on King Cakes, always topped with white icing and a liberal dusting of purple, green and gold sugar. 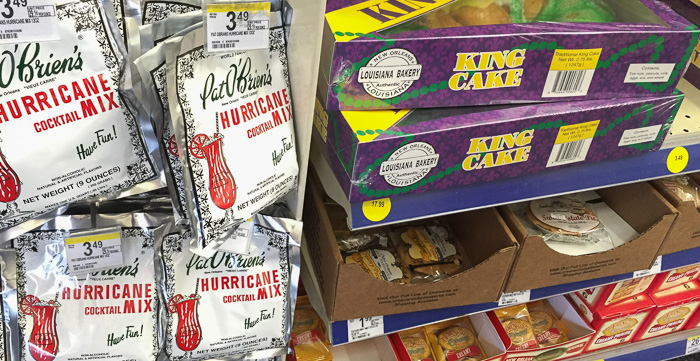 January 6th is the Feast of the Epiphany, a day to celebrate the three kings who brought gifts to baby Jesus. To New Orleanians, it’s also the day the King Cakes come out. Each cake has a small plastic baby hidden inside; whoever gets the slice with the baby has to host the next King Cake party. The cakes can come stuffed with cream cheese, berry filling, or even praline (that’s got to be the New Orleans version of “turducken” - pecans stuffed in caramel stuffed in King Cake!). We sampled quite a few and Gambino’s made the stand-out favorite.

My head is still swimming with tidbits to share, but I’ll wrap this article and start on the next. I can’t wait to tell you about Mardi Gras parades! Here’s a teaser: one “megafloat” was 365 feet long, and our group caught well over 45 pounds of beads (we weighed them).