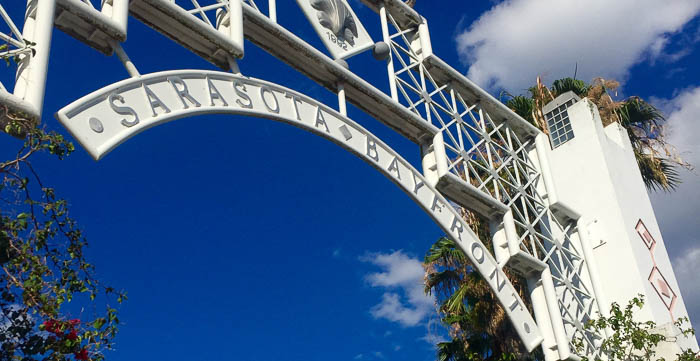 Jill has been coming to the Siesta Key area for years, but she never experienced the First Friday Art Walk on Palm Avenue; we decided to check it out. The event started at 6pm, but we had a long day and didn't make it up there until about 7pm. We didn't know what to expect and found a rather intimate affair. There were about a dozen galleries open and at least half offered light snacks along with wine or punch. We spent our time enjoying the galleries and then planned to quickly wander up and down Main St., choose a restaurant and eat. The best laid plans! We didn't sit down to dinner until after 9:15pm. We got thoroughly and very happily stuck leaning against a building listening to jazz classics from Smokey's Session and the Dan Dembicki Trio. 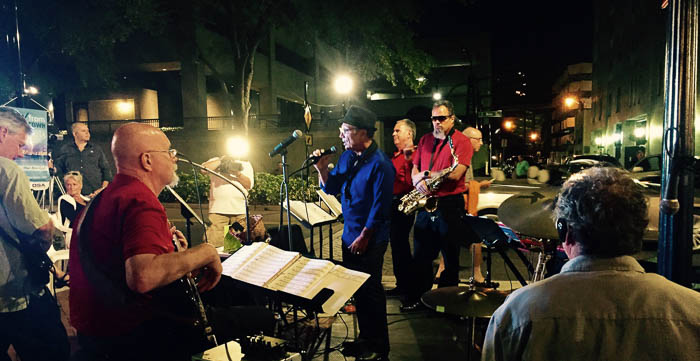 The Downtown Sarasota Alliance sponsored them for the First Friday event and we couldn't have been more grateful. They were a talented jazz group that included 2 tenor saxes and a trumpet in addition to the regulars you'd expect. How could we leave? We kept saying "ok last song and we'll go" and then they'd strike up another great number. We finally left when they wrapped, and settled in for dinner at Clasico just down the street. Why there? The hostess was very friendly and the menu looked interesting, but mainly it was the musician they hired, a seasoned gentleman who was playing guitar and crooning softly in French. He was captivating. To cap off an already wonderful evening, the waiter steered us well and recommended the Truffle Fries and the Baja Tempura Fish Tacos, which Jill ordered with lettuce wraps instead of tortillas. If this trip has taught me anything it's that I should always ask for a recommendation from the server. They've done us a solid every time.

On Sunday, Jill and I took a quick trip into the upscale St. Armand's Circle for lunch. We dined at Columbia, a very popular Cuban restaurant. We each got their specialty salad and a Cuban. While the Cuban was very good, I think I've had better. Am I spoiled by the amazing Portland food scene? Definitely. Jill liked her Cuban as well, but said the Mahi Mahi Cuban she got last time was far better. The white Sangria was a refreshing treat before we took a brief stroll to see the statuary and historical information in Circle Park. A small sign helpfully explained the role John Ringling played (him again!) in the development of the area. I'm not much of a shopper, but it's a unique area and I was especially glad to see it considering my new infatuation with John and Mable Ringling.

The last surprise win in Sarasota was the Embracing Our Differences outdoor art display in Island Park at the Sarasota Bayfront. We repeatedly noticed street-side advertising signs, but they were cryptic enough we couldn't figure out what it was. We made a point to stop and were glad we did. This public art installation has no entrance fee and is available to see in April and May each year. The non-profit organization has been operating since 2004 and their goal is to "...create a community where diversity and inclusion are honored while teaching the importance of being an 'up-stander,' not a 'by-stander.'" From thousands of entries, they select 39 pieces of original art and quotes which are displayed on billboard-size prints throughout Island Park. 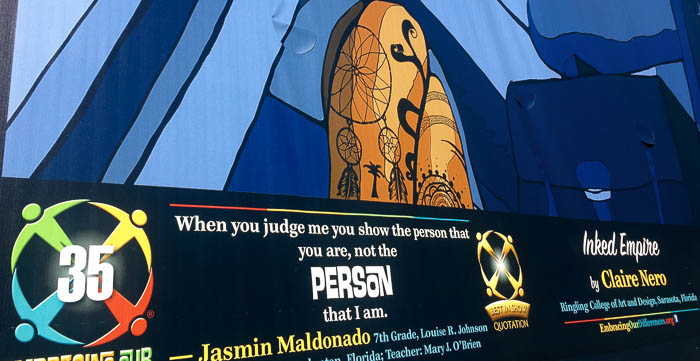 It's hard to imagine that someone could walk through and be completely unaffected. While I wasn't wowed by every piece, there were a few pieces of art and more than a few quotes that stuck with me. Kudos Sarasota. This is an impressive and meaningful volunteer effort. Island Park is also a beautiful place to walk, with a children's play structure and fountain, large grassy areas, plentiful benches, and a picturesque dolphin fountain at the end of the point. Oh - and there are more than a few ginormous yachts harbored in the bay!

My final sightseeing stop in Sarasota was the Marie Selby Botanical Gardens. My only comparison is the Phipps Conservatory and Botanical Gardens in Pittsburgh, and I must say this one didn't compare. For me, it wasn't a great value for the $19 entry fee. Note though that I am not much of a plant person so I was viewing at a superficial level. Highlights were the Bonsai exhibit and the temporary photography display in the Christy Payne Mansion, but the Children's Rainforest Garden really stole the show. This is one of the coolest kid's areas I've seen and I'm pretty sure I wasn't the only one who thought so. It was 15 minutes to closing on a warm day so there weren't many people around, but of the dozen folks in the kid's area, only one was a child! The rest of us were singles or couples with goofy grins wishing we had a small child to play tag or hide-and-seek with. The area is centered on a massive 100-year-old Banyan tree and offers small caves, learning discovery areas, treehouse-like structures, suspensions bridges, a waterfall and more. Frankly, it made my day. At the southern end of the park I noticed a few folks brought chairs and camped out to read and enjoy the view of the bay and the gardens. It is secluded and serene and I can see the draw for residents who are likely members. 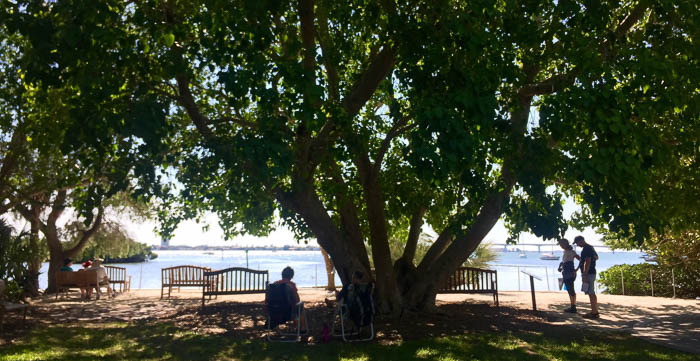