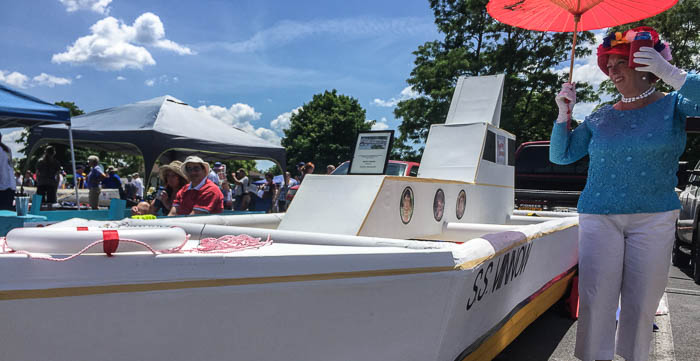 Mrs. Howell with the S.S. Minnow

Remember the scene in Airplane! when Steve McCroskey hands Johnny a weather report and says “Johnny, what can you make of this?” and he replies “This? Why, I can make a hat or a brooch or a pterodactyl …”? There were a whole bunch of Johnnys at the Cardboard Boat Regatta this weekend, but instead of paper they had cardboard and duct tape. What did they make of it? A jeep, a bowling alley, the S.S. Minnow… 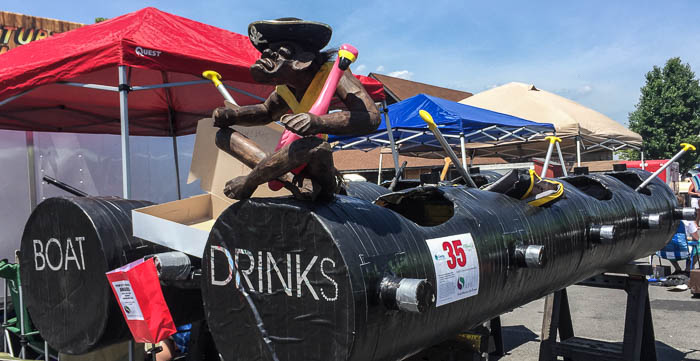 One of many fun entries in the Cardboard Boat Regatta

What a hoot! The Cardboard Boat Regatta screams “Lake Fun!” and is the perfect kick-off to summer in the Finger Lakes. The regatta is the main event at the Watkins Glen Waterfront Festival, held the 3rd weekend in June at the southern tip of Seneca lake. 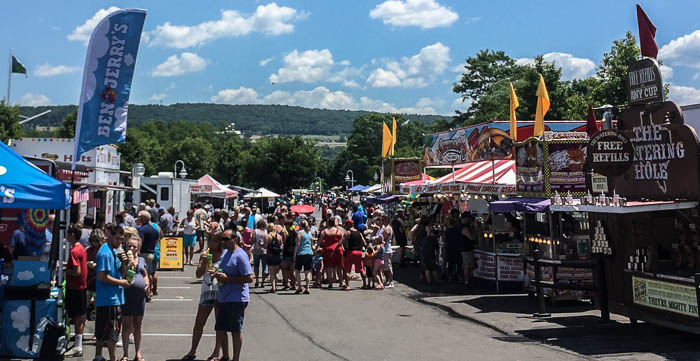 Food vendors at the Waterfront Festival. Let there be fried food and goodies for all!

Like many festivals, this one offers craft booths and food vendors, and they’ve even added a Friday Night Lights affair with live music and a harbor light show, but the Cardboard Boat Regatta on Saturday is the headliner. There must’ve been 50 boats of all shapes and sizes - creativity abounded! Most crews had themed costumes that matched their boat design, and though quality varied wildly, all had one thing in common: they clearly had a blast. 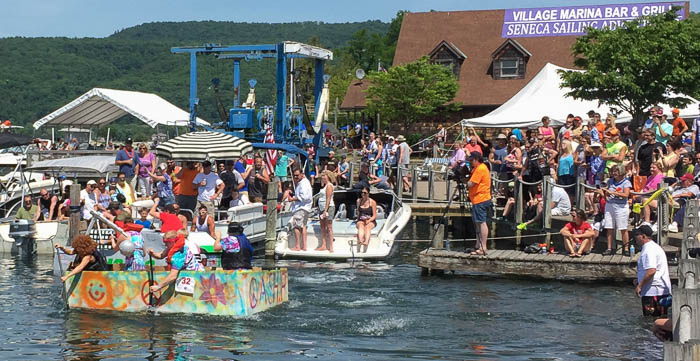 "Peace A Ship" right after the launch. I thought these guys would sink right off, but they stayed seaworthy (at least at the start!).

This event is good clean fun, pure and simple, and reminds me of growing up on the lake. As they say on their website:

Remember… there is nothing…
absolutely nothing…
half so much worth doing,
as simply messing about in boats!!! 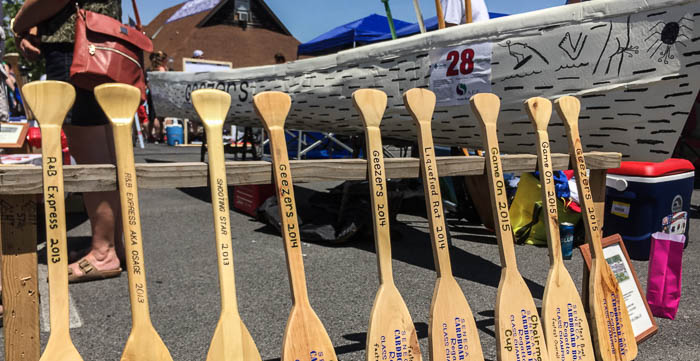 The “competition” is open to all and pulls in young and old alike, from the girl with a Valley Girl side-ponytail in “Wet Ever!”, to the “Geezers” with their sleek canoe and winning tradition (with age comes cardboard wisdom?). I loved “Grampa’s Girls” with one delighted gentleman in the stern of a craft filled with five young ladies. 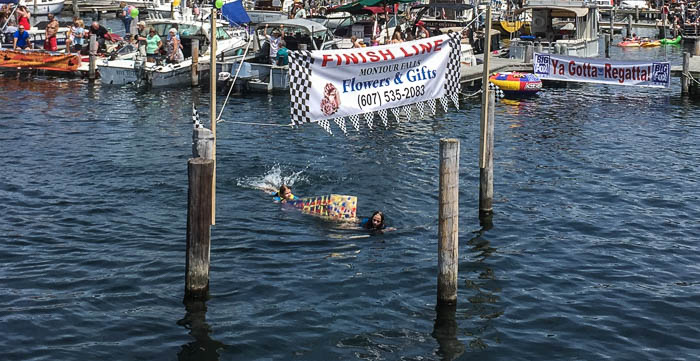 These two ladies got a roar from the crowd when they finally crossed the finish line. From our vantage point, we could see 2/3 of the race course, and the girls were pushing/pulling the entire time. "A" for effort!

The race itself is laugh-out-loud funny, but don’t expect expect lightning fast action. The afore-mentioned Geezers zipped through the U-shaped course in under two minutes but many took 20 minutes or more to make their way around, some valiantly swimming and dragging their capsized, waterlogged boats to the finish line. Perseverance! 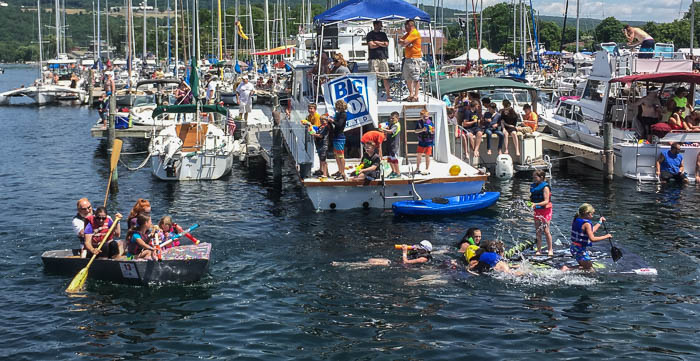 Mayhem on the race course! Those boys on the motorboat ambushed every cardboard boat that came by. Some crews fought back, though they also attacked each other (!).

It seems to be tradition for spectators to become part of the action since many came equipped with water guns and buckets and gleefully attacked boats as they passed. Crews didn’t take it lying down; they had weapons of their own and fought back. 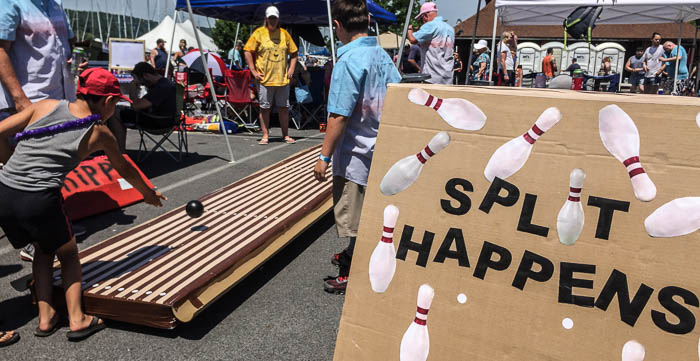 The "Split Happens" cardboard boat doubled as a bowling game prior to the race.

Cardboard boats were available from 11am to 2pm for viewing and “People’s Choice Award” voting. All voting proceeds benefited the Spirit of Schuyler which aids Schuyler County residents facing financial crises. 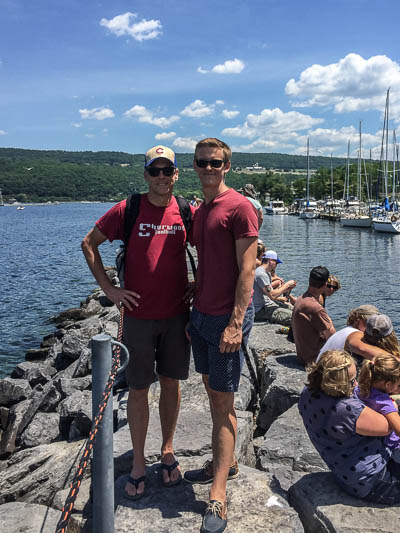 Chris and Jacob exploring the jetty in Seneca harbor

We arrived around 12:30pm, found parking in a neighborhood nearby, and had plenty of time to look at boats, explore the jetty, and grab food before the race started at 2pm. The festival was crowded, but not overly so, and we had no problem finding a spot to watch. 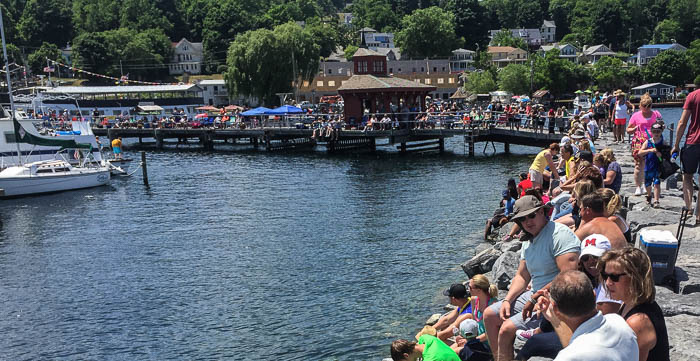 Spectators lined up along the jetty and pier

Many came equipped with chairs and sat along the pier, while others lounged on the jetty, a great spot to bring a cooler and hang out for the duration. Pop-up canopies and umbrellas provided portable shade for those sensible folks who planned ahead. 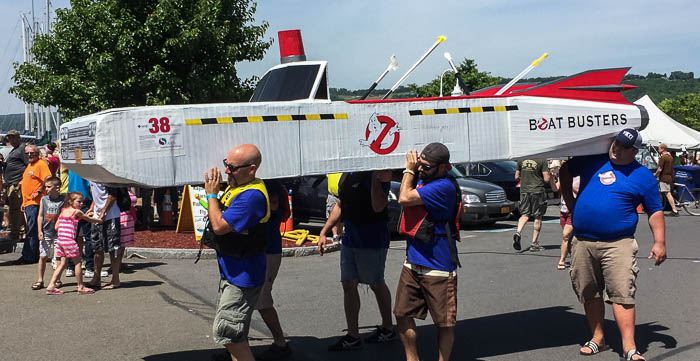 "Boat Busters" carrying their rig to the launch area.

We didn’t stay for the end, but I saw enough to become thoroughly smitten. I would love to “compete” someday. To get folks started, the Finger Lakes Boating Museum in Hammondsport is offering a “Cardboard Regatta” course August 1–8. It costs $75/group to spend the week designing and building a cardboard boat, and then compete in a mini-regatta with class participants. How cool is that??

Event website: Watkins Glen Waterfront Festival
Cost: Free
Date/Time: 3rd weekend in June. Friday night music starts at 6pm and the lights go on at dusk. View cardboard boat entries on Saturday 11–2; the regatta runs 2–4pm (or until they all finish!).
To Bring: We just brought an unbrella for shade, but other folks had folding chairs, pop-up canopies, and coolers with food/drink. 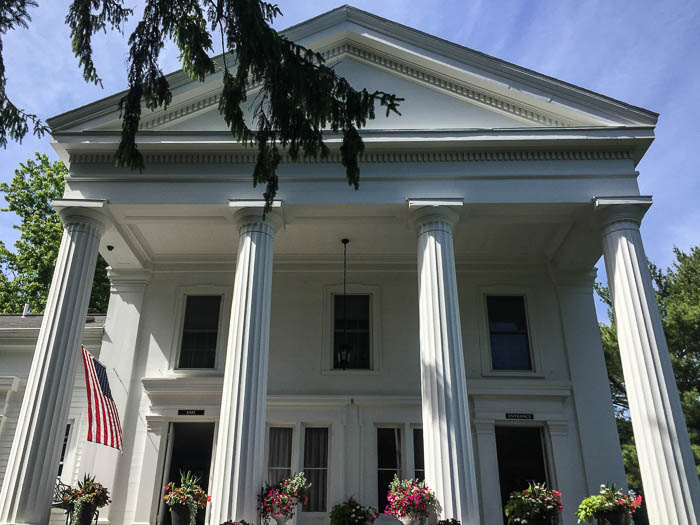 After leaving the festival, we took the long way home driving north along the west side of Seneca to visit Miles Wine Cellars on the recommendation of one of Lynne’s friends. I wish I’d known about their haunted history before visiting - rising mists, slamming doors, flying comforters…ooooOOOOooooooo! 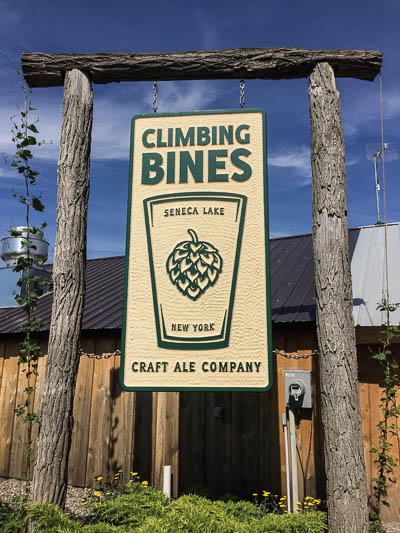 Climbing Bines was just a few minutes north and provided our final stop. The guys weren’t overly excited with the beer (they’re partial to Keuka Brewing and Steuben Brewing right up the hill from our cottage on Keuka), but we were all impressed with its facilities and setting. It’d be a fun place to pop in for live music and a pint. I know they have a summer music series since there was a poster on-site, but I can’t find the schedule online. Perhaps their events calendar will be updated soon. 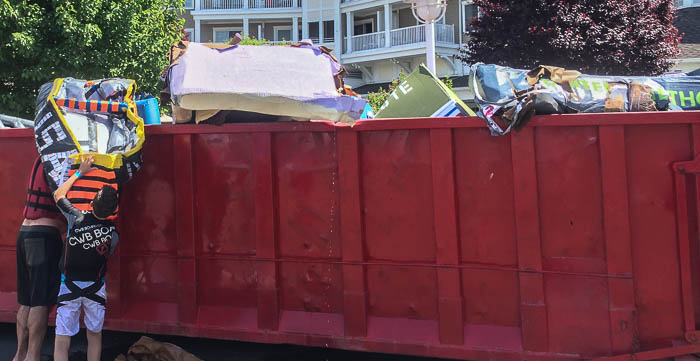 The final resting place for many a cardboard boat

Chris, Lynne and Jacob tasting wine at Miles Wine Cellars. A toast to all the cardboard boats that won't live to see another race!