Update June 2016: Any time someone wants to check out this museum, I'm eager to tag along.  Glenn Curtiss was a marvel and the museum reveals a fascinating new nugget with each visit.  Did you know that Curtiss captured the motorcycle land speed record in 1907, clocking in at 136 mph?  Incredible!  FYI, Phase I of museum renovations are complete with new office space, board room, restrooms and expanded gift shop; Phase II will add exhibit space.

Our good friends the Ginns are visiting for the July 4th weekend. Given that Jim was an Air Force officer and Logan is interested in aeronautical engineering, a visit to The Glenn H. Curtiss Museum was a natural fit. 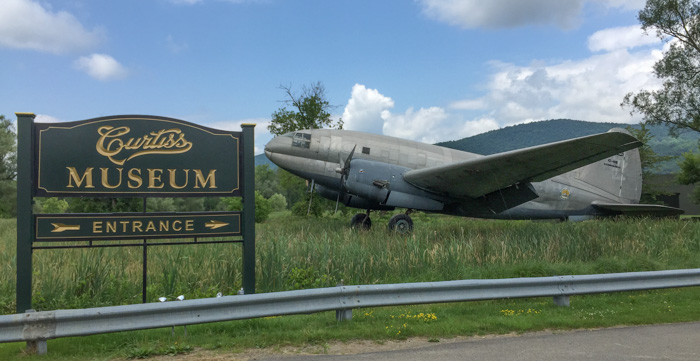 Actually, this would be a fun stop for folks with little interest in aviation. Glenn Curtiss was a creative, hard-working inventor; his story is surprising and fascinating. The museum itself is an eclectic mix of motorcycles, planes, motorboats, farm equipment, period furnishings, cameras, and more. 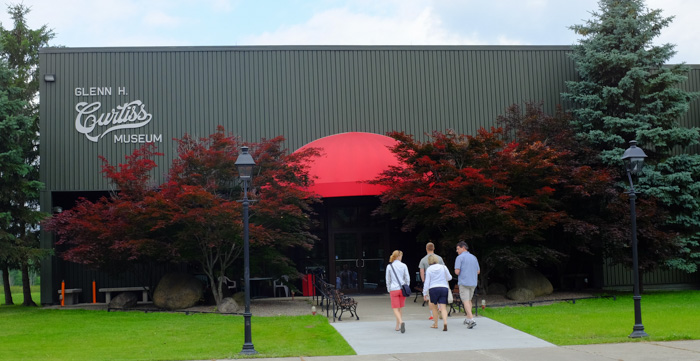 Upon entering and paying the $10 admission, visitors are first directed to a bicycle and motorcycle display. Glen Curtiss was an avid bicyclist, routinely biking over 70 miles from Rochester to Hammondsport. This simple hobby coupled with Curtiss’s “tinkerer” mindset and his need for speed, led to so many firsts and impressive titles I can hardly keep them straight. 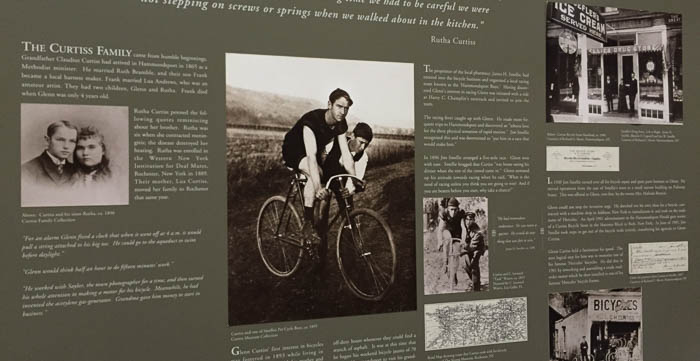 Glenn Curtiss had a passion for bicycling

Curtiss designed and manufactured his own motorcycles and in 1907 won the title of “Fastest Man on Earth” when he reached 136 mph on his V8. He designed the engine for the first successful American dirigible, and in 1908 his “Red Wing” flyer was the first public American flight of a heavier-than-air machine. Between 1908 and 1910 he won all three legs of the Scientific American Competition with increasingly difficult feats of flight. In 1910 he gave the first demonstration of aerial bombing and then pioneered the design of seaplanes and flying boats to earn the title “The Father of Naval Aviation.” The man was a creative genius and pioneer in the field of aviation. And to think all this happened on the quiet shores of Lake Keuka!

Wandering through the museum is a curious experience. As Logan said “How is this stuff arranged? It’s not in any order.” It seems as though the museum started with a few anchor pieces and as their collection has grown, they’ve scooted items over and tucked new ones in. 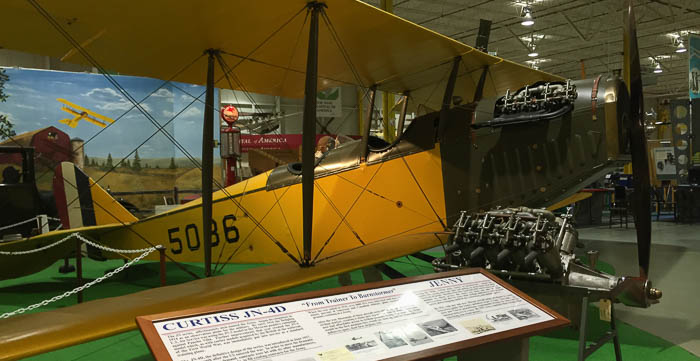 The Curtiss Jenny in the Glenn H. Curtiss Museum

After the motorcycles, we viewed many of Curtiss’s early airplane designs, but then encountered WWI memorabilia, home furnishings from the early 1900s, early winemaking equipment, airplane engines, and beautiful old wooden boats. If an item has a link to Glenn Curtiss or the Hammondsport area, it can find a home in the Curtiss museum. 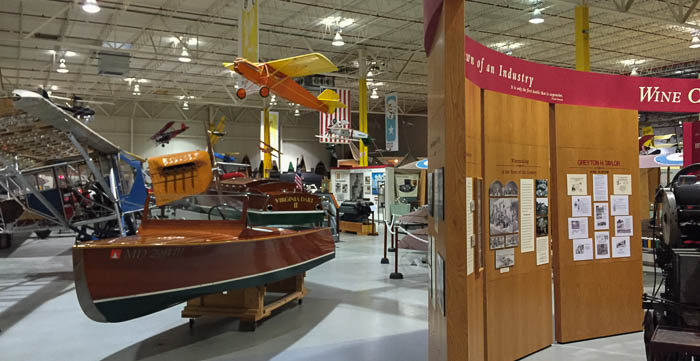 Displays in the Curtiss Museum

For the young ones and the young at heart, there’s a play area in the center of the museum with toys, hands-on activities, and flight simulator games. 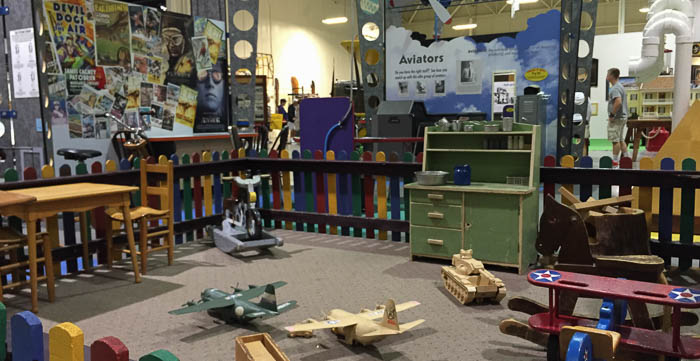 The children's play area in the Curtiss Museum

The best “play area” and my all-time favorite part of the museum is the restoration shop. Their door is always open and visitors are free to go in and wander. The volunteers are passionate about old planes and seem happy to take a break from work to share details about their latest project. 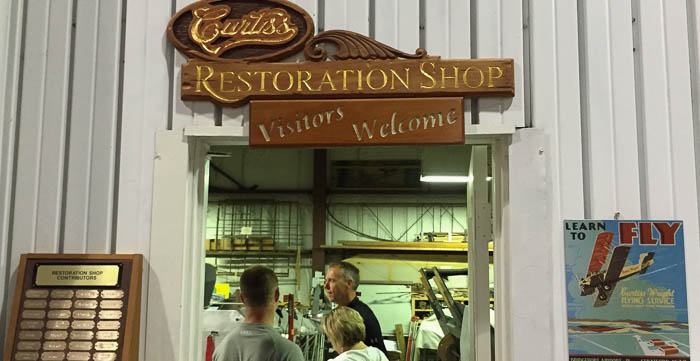 Entrance to the Restoration Shop at the Curtiss Museum

Their work is impressive; they have restored or recreated numerous aircraft including the 1914 Curtiss Wannamaker flying boat which successfully flew for the public in 2008. 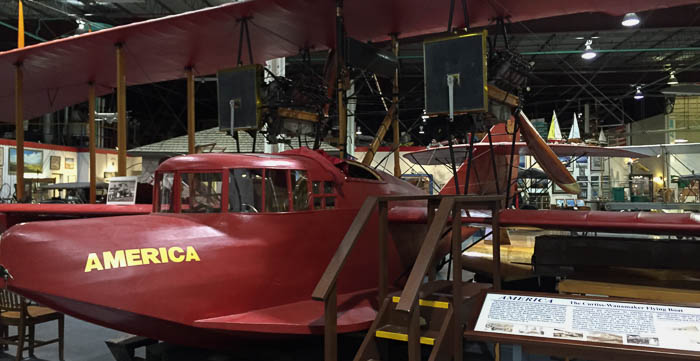 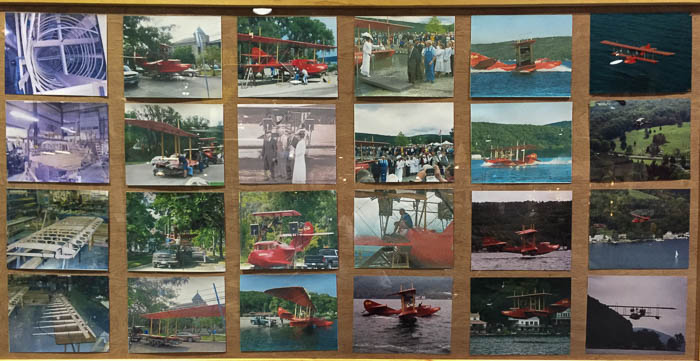 Photos of the recreation of the Curtiss Wannamaker by the Glenn H. Curtiss Museum Restoration Shop volunteers

Their current project is a P–40 that was pulled from the swamps of the Everglades. 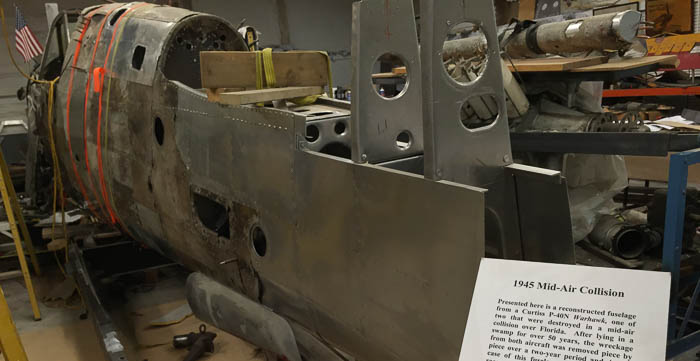 The P-40 restoration project at the Curtiss Museum 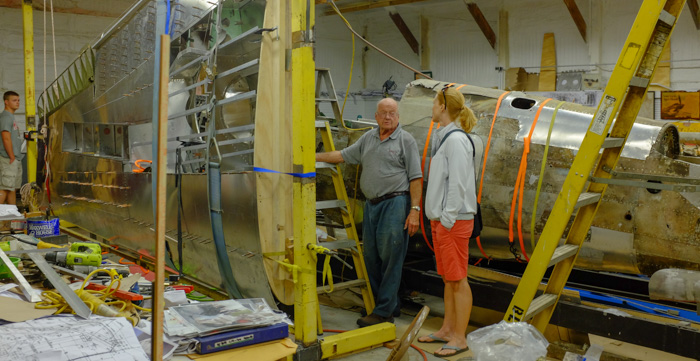 I love love love this museum. I am biased of course given my passion for Keuka Lake and the fact that my dad worked on multiple restoration projects, but still. If you’re in the area, stop in; you’re sure to find something of interest.

After the museum, we popped in for beer tastings at both Finger Lakes Beer Company and The Brewery of Broken Dreams (I wrote a previous blog post about these Keuka Lake craft breweries). Both are in Hammondsport just a few minutes drive from the museum.  For lunch we tried the Timber Stone Grill in Hammondsport. They’ve been open for just three short weeks are are still working out the kinks, but we’ll be back to this lovely rustic-modern restaurant. It has good food, friendly staff, and the menu is interesting and reasonably priced.