What is it about old wooden boats? Is it their simple elegance, wood varnished to a high gloss, gracefully cutting through the water, or the way they encapsulate an era, a tableau frozen in time reminding us of days gone by? Perhaps it’s the hard work poured into each and every one, a labor of love clearly evident in each polished cleat and hand-lettered hull. 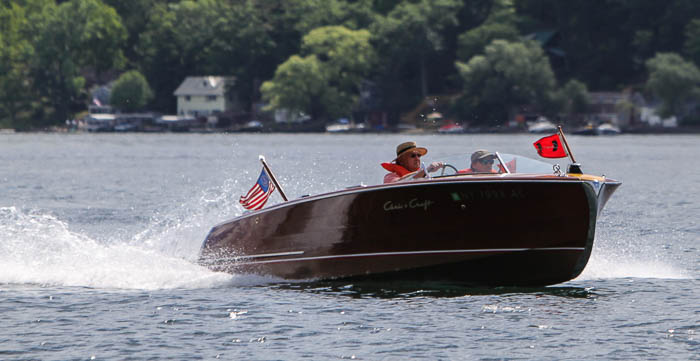 A boat racing in the Wine Country Classic Boat regatta

Their special something-ness is difficult to pin down, but when an old wooden boat cruises by, I can’t help but pause, grin, and breathe out a quiet “wow”, voice laced awe and pride. A 100-year-old boat is both a marvel and a connection to a past when things were built from relatively simple materials, by skilled craftsmen, made to last. In our current throwaway world of complex technical gadgetry and planned obsolescence, a painstakingly preserved wooden boat is a testament to man’s ability and tenacity.

I’ve spent summers on Keuka Lake nearly my whole life and have always admired classic boats from afar, waving from my cottage or as we pass on the lake, but this year I finally set aside a few hours to attend the boat show and see them up close and personal. High time! 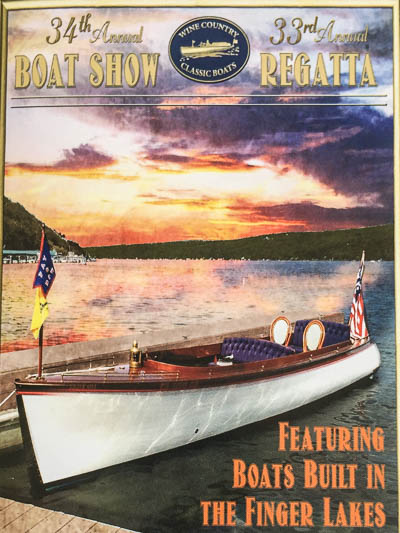 2016 marked the 34th annual Antique Boat Show and 33rd annual Regatta, held in Hammondsport’s Depot Park. Typically the third weekend in July, the show is hosted by Wine Country Classic Boats (WCCB) whose mission is to “celebrate and promote education about, and preservation of, the history and culture of historic, antique and classic boats…”. The group does a bang-up job coordinating this friendly event that’s entertaining, community-focused, and has some of the coolest old boats you’ll ever see.

Though the fun begins on Friday with an informal day-cruise on Keuka Lake and evening wine tasting in Depot Park, the main events occur Saturday and Sunday. 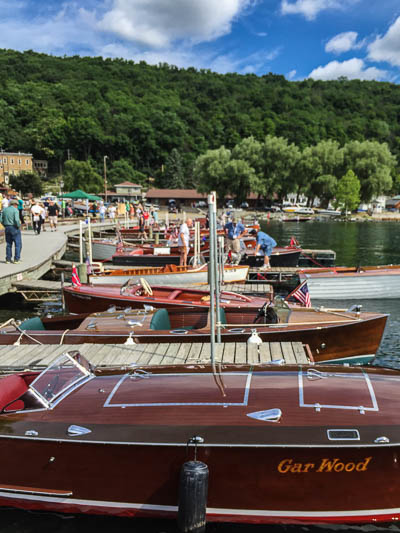 Just a few of the classic boats along the waterfront in Hammondsport.

After the opening ceremony at 9am Saturday morning, boats are officially on display for both spectators and judges. Visitors are free to wander the pier, peruse boats, and chat with owners. I know next to nothing about boats and appreciated each craft’s registration placard with basics like make, model, year, and classification. That’s just the tip of the iceberg of course; each boat has a unique and rich history. Luckily, the folks I met were more than happy to share their story and patiently answer questions. 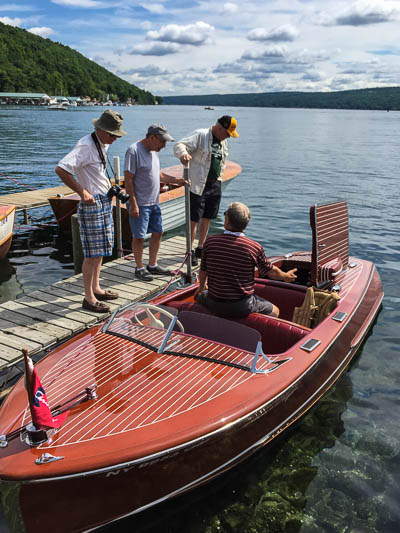 Antique boats fall into five classifications.  Here’s how I keep them straight:

Boats are further defined as Preserved vs. Restored, and then fall into one of 21 different Power classifications (Runabout, Launch, Outboard, etc.). Yeesh...that’s a lot to take in. For more on classifications and the definition of preserved vs. restored, refer to this article from the Antique & Classic Boat Society. 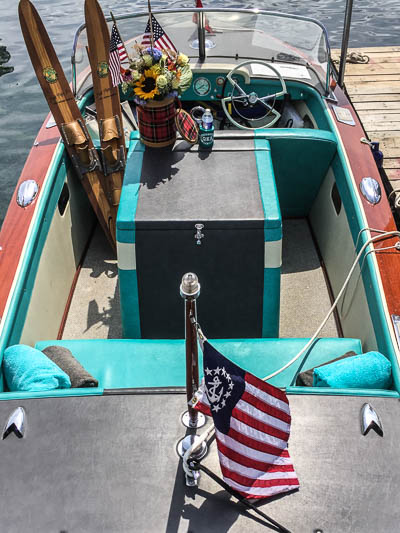 Some boats went all out with their presentation. This one sports custom monogrammed towels!

There were about 60 boats registered in the 2016 show, but that number is typical of Saturday, not Sunday. Half the boats leave Saturday evening since owners come from all over and use Sunday as a travel day. Wooden boats are a passionate hobby, and work beckons Monday morning.

The 3pm parade is Saturday’s star attraction, when the boats cast off and motor past the waterfront two times, first as a slow-go, and the second time in a faster “fly-by”. The boating events conclude at 5pm, but socializing continues with cocktails, dinner banquet, and awards at the Curtiss Museum. Apparently the banquet is open to the public (and not just for WCCB members), so if interested in purchasing a ticket, contact Wine Country Classic Boats.

Boats are once again on display starting at 9am Sunday morning, though the craft may be empty since owners have a mandatory driver’s meeting before the big race starts at 10:15. Note that the regatta has just two heats and usually wraps up in under an hour; if you show up at 11, you could miss the whole shebang.

Why race? As one boat enthusiast imparted, “You get two boats on the water and they’re gonna race, even if they’re just rowboats.” “Heck,” he said, “they even used to race steamboats on Keuka!” 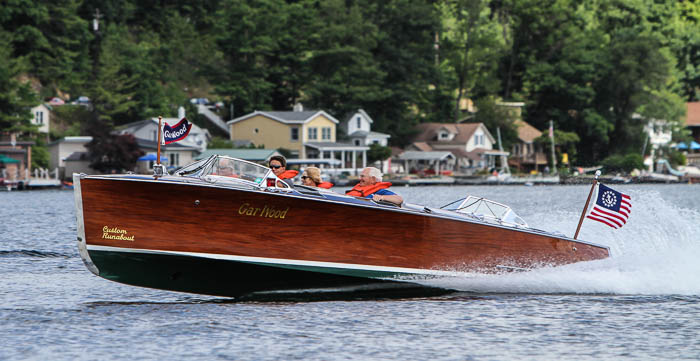 The WCCB regatta is “…a salute to the historic Hammondsport-Penn Yan Race of the 1920’s and 30’s…”. Wait. What? An old race on Keuka?? Oh my yes. According to this article, the race was a biggie, run between the rival towns of Hammondsport and Penn Yan, located 20 miles apart at opposite ends of Keuka Lake. Though just two boats raced, the event was hotly anticipated. Glenn Curtiss typically built the Hammondsport entry and Penn Yan boats provided the competition. Curtiss may be best known for his motorcycles and airplanes, but he was an engineering genius with myriad interests and seemingly always up for a race.

The original race ran the length of the lake from Hammondsport to Penn Yan and was discontinued around World War II. Resurrected in 1984 by the WCCB, the regatta ran the same 20-mile route but it soon became too difficult logistically. The course changed to an out-and-back from Hammondsport to the Bluff, but even that course posed challenges, especially for smaller boats wishing to compete. This year, the race ran two laps on a shorter eight mile loop from Champlin Beach to Tanglewood Point and back, for 16 miles total. 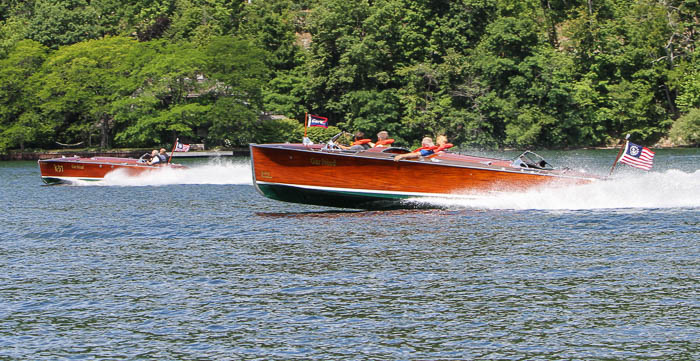 Race action! This photo was snapped seconds before the inside boat overtook the other.

If you only see the first heat of boats, the “race” may seem more like a pleasure cruise; they’re moving, but at fairly normal lake speeds, and they’re spaced well enough apart there’s rarely head-to-head action. We motored down to watch by boat and were contemplating leaving when we noted three big rooster tails in the distance. Woohooo! The second heat is worth waiting for! The big boys let loose and it was thrilling to see their sleek boats thundering by. We even caught some racing action at the far turn as one boat cut in and passed on the inside.  In the end, we were all rooting for the K-37 Gar Wood; not because they were winning, or for their aggressive driving, but for the snazzy orange helmets they wore.

Watching the second heat, I couldn’t help but think of the Virginia Dare II, now on display at the Curtiss Museum but once the terror of Keuka. The boat is a 33-foot “gentleman’s runabout” built in 1927, but the owner was purportedly no gentleman as he delighted in buzzing docks and swamping boats as he sped by (!). 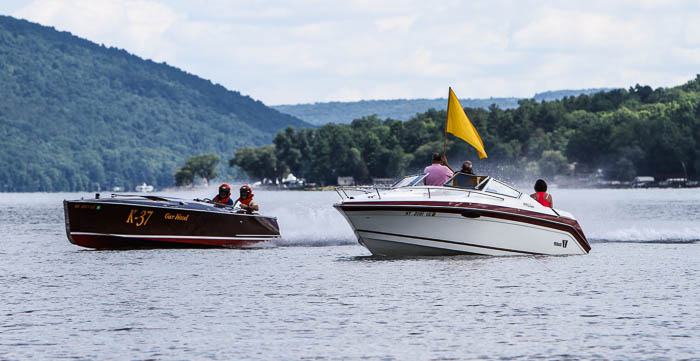 Our favorite racer (love the orange helmets!) passing one of the flag boats.

If you watch by boat as we did, the WCCB asks that you please stay in the middle of the lake and well back from the flag boats (you can’t miss them - they wave big yellow flags). The racers run in a counter-clockwise loop up the east side of the lake, cross east-to-west just north of the flag boats, and then motor south along the west side.

While wandering the boats Saturday, it was impossible not to notice the Olive Oyl, one of two historic boats at this year’s show. Built around 1910 on Seneca Lake, she’s a 25-foot “Special” constructed of cedar and mahogany, and her owners, John and Joyce, were splendidly decked out in period attire. 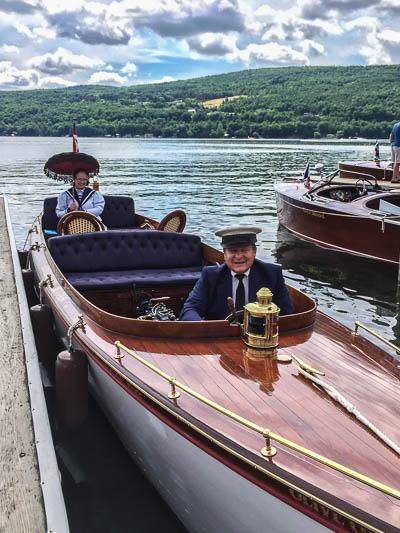 The sleek Olive Oyl with her friendly owners John and Joyce.

John shared that the Hammondsport boat show is Olive Oyl’s one and only outing; the rest of the year, she remains in his barn. Long periods out of the water dry Olive Oyl out to the point that she’s no longer water-tight; if he just put her in the lake, she’d sink right to the bottom. To avoid that grim fate, John sets soaker hoses inside the hull and lightly mists the interior. After three days, the wood has swollen and she’s once again seaworthy.

I relayed this tale to my dad and he nodded knowingly and added a similar story of his own. Before we owned our current sailboat (a 1959 Flying Dutchman), we had a Wright Built K Boat (made in Dundee, NY) that was stored under the cottage over the winter. Each spring, they’d bring her out and sink her in our cove! After three days - apparently a magic number - they’d bring her up, rig her, and she’d be solid for the rest of the season. Whaddya know. 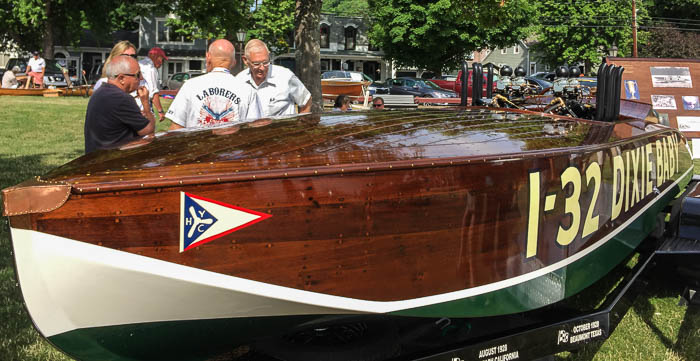 The Dixie Baby was another featured boat and quite a stunner. She’s a 1921 racing boat powered with a WWI Spanish aircraft engine; you don’t see that every day!

Other Attractions and Amenities

You’ll find more than boats, boats, boats at this show. There are a half-dozen woodie cars for auto enthusiasts, a few vendors, raffles and drawings, and a variety of refreshment options. This year food vendors included the local Rotary (with breakfast items in the morning and hot dogs/sausage for lunch), the Lakeside Restaurant mobile cart, and ice cream from Seneca Farms. On Sunday, Boy Scouts held a chicken BBQ, one of their biggest fundraisers of the year. 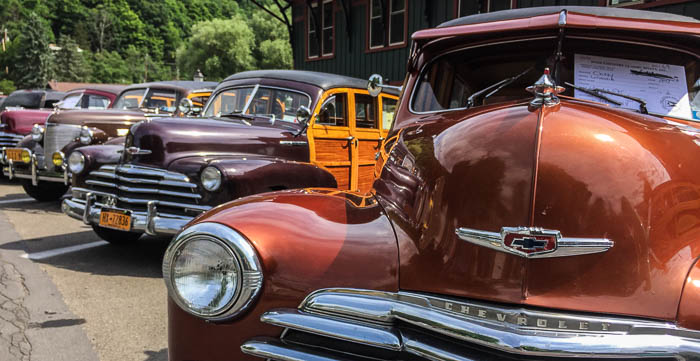 Certainly not boats, but these woodie cars fit right in.

Did you know that the eight small permanent docks in Depot Park actually belong to the WCCB? The club only uses them once a year but leaves them in year-round in cooperation with the town of Hammondsport. Of course those docks don’t provide nearly enough moorage for the show, so WCCB puts in an additional nine floating docks just for the weekend. The Hammondsport Fire Department lends a helping hand each year; one WCCB member shared that they couldn’t do it with the fire department’s help. Thank you Hammondsport Fire!

The Hammondsport Antique Boat Show is an entertaining event for boat enthusiast and casual gawkers alike. For even more photos of this show and others, check out the live-ish reports from Woody Boater.

Finally, here's the 2016 schedule for your reference: 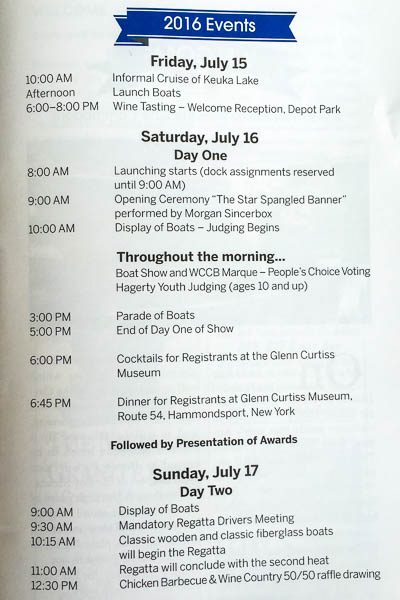 Schedule for the 2016 Antique Boat Show and Regatta in Hammondsport, NY.

Bonus shot of one of Hammondsport's most unique buildings: 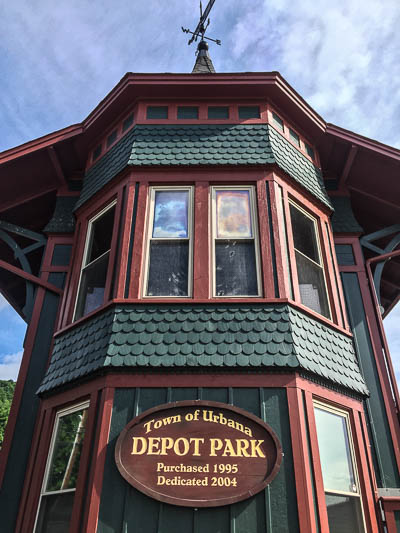