After exactly one experience with deer flies I felt compelled to write this public service announcement. Why? They’re an almost unstoppable, bloodthirsty menace, especially fearsome for the uneducated and unprepared. Like me. I saw a bunch of “houseflies”, shrugged, and proceeded to hike deeper and deeper into their clutches. Even worse, I hiked for four full miles (out of five) before feeling a slight twinge and thought “Huh…one might have bitten me through my shirt”. One? Try 17. Seventeen itchy welts on my shoulders and upper back that are still bugging the tar out of me days later.

And so I write. If I can save even one person - or at least help mitigate the damage - I’ll consider it a win, Humans 1, Deer Flies 0. Okay okay, they got me 17 times, so I’m shooting to help 18 people. Then we’ll be ahead.

I’ve scoured a bunch of websites (know thy enemy!) and distilled the info down to the most pertinent facts. Sure, learning about the deer fly life cycle can be moderately interesting, but when you're being eaten alive, larval and pupal stages have little bearing. I’m focusing on what’s important to humans: what they are, when they come out, where they hang out, what they’re attracted to, and how you can protect against them.

Deer flies look innocuous, a lot like the common housefly but a little bigger, with a yellow cast and green or gold eyes. Like mosquitoes, it’s the females that feed on blood; the males are chill, just looking for pollen. Their bite is nasty since it’s not actually a bite but rather a cross-shaped incision made with the mandibles and maxillae (aka bitey, cutty mouthparts). The female cuts the skin allowing blood to flow which she then sops up with a sponge-like mouth dealy.

Mild pain and itch are the most common allergic reactions to the deer fly’s saliva; individuals can become increasingly sensitive to repeated bites. Since the saliva contains an anti-coagulant (which prevents your blood from clotting while she’s feeding), a few drops of blood may run from the cut when she leaves. Ugh. Sufficiently creeped out yet? At least we don’t need to fret over disease. While deer flies can spread tularemia, it’s extremely rare.

When they come out

Deer flies can generally be found any time from May to September, but mercifully the adult life span is short at just 30–60 days. In the Finger Lakes area, deer fly season is typically constrained to 4–5 weeks in late June and July. They clear out by August, making way for horseflies (!).

Deer flies only hunt during the day, with peak activity the three hours after sunrise and the two hours before sunset. They like temperatures between 72 and 90 degrees.

Where they hang out

Damp areas. Females lay their eggs on vertical leaves of plants that hang over water or wet ground. When eggs develop into larvae, they drop into the water or saturated soil below to feed and develop. 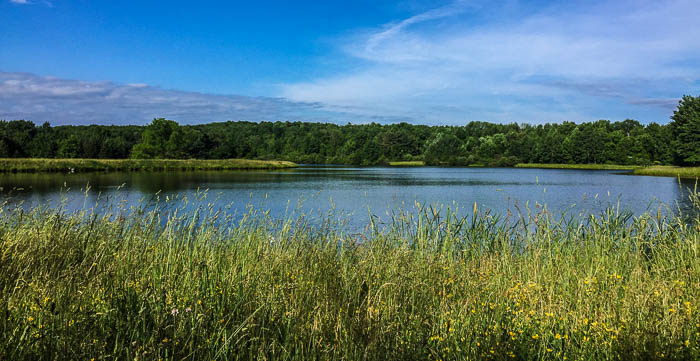 Glad I visited Dave Lake in early June before the deer flies were out. I suspect it's a prime deer fly zone, though perhaps the zillion of dragonflies I saw help keep them in check.

When the females are looking for a meal, they wait in shady areas under bushes or trees, often along the margins of an open field, road or path. From there, they use two main tools to zero in on a host: sight and carbon dioxide (more on this in the next section).

What they’re attracted to

Deer flies mainly use visual cues to find a host, and are attracted to motion, size, shape, and dark colors. They swarm the highest point of a moving object, so with human hosts, they typically bite the head and shoulders. As mentioned above, carbon dioxide is a long-range cue, and may be one reason the flies congregate about the head.

How you can protect against them

Finally, the good stuff! Unfortunately, these suckers are tough to deter. First off, there’s no good means of managing the overall population, so don’t expect them to go away any time soon. Second, they’re persistent and could care less about most repellents. Still, there are steps you can take, listed below in order from most effective to least (according to my internet research and narrative testimonials):

Baseball cap with a TredNot deer fly patch attached. Looks like it was a success, and for more than deer flies. Photo courtesy of hspauldi.

Deer flies are a nasty lot, but there’s no need to cower inside during deer fly season. Though nothing will be 100% effective, we can find protection enough to get out there and enjoy nature. If unprepared, don’t blithely ignore signs of deer fly activity. Like me. If you pull up to a parking lot and your car is immediately swarmed with flies, ABORT the hike. I repeat, ABORT. 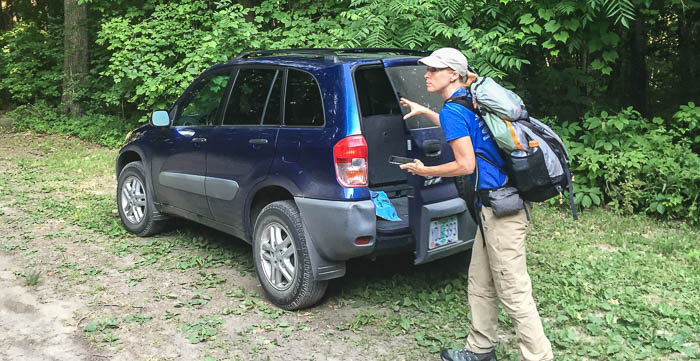 Me and my car, unsuspecting royal blue deer fly magnets

Before wrapping up, I’d like to take a moment to thank frogs, toads, spiders, wasps, hornets, dragonflies, and some birds (like killdeer) who feed on deer flies. Unlikely compatriots, but the enemy of my enemy is my friend.  Hopefully these guys can help out the poor cows who can’t protect themselves. This website shares “It is not uncommon to see as many as 100 flies feeding on an animal at one time. Twenty to thirty flies feeding for six hours are capable of taking 100 cc of blood.” Terrible!

If you’d like to know more, check out these articles from Wikipedia, Purdue University, and the Adirondack Almanac.

Good luck out there!

Want to find a hike on the FLT near Keuka Lake?  Check out my trip summary: Hiking the Finger Lakes Trail