We shouldn’t have stepped foot out of our car. Period. It was a rookie mistake that we will. not. repeat.

Our plan was to hike the Hi Tor Blue Trail in the Naples area, from the Parish Hill Road parking lot to the East Hill Road parking area, 9.2 miles total for the out-and-back. I needed 10 miles, so we’d pick up the last bit at the end, hiking a ways in Conklin Gully. 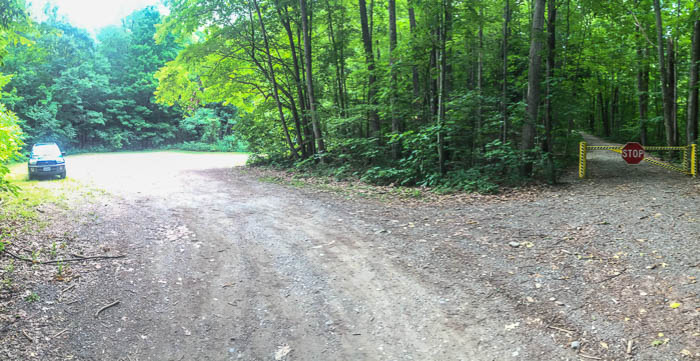 We parked in a huge lot (on the left) and the Blue Trail leads off beyond the stop sign (on the right). Terrible photo, but we were swarmed and in a rush!

We got an early start and pulled in about 7:40am, eyes wide and mildly horrified at the flies swarming our car. Looking back, I’m astonished we didn’t seriously consider bailing and head elsewhere - there were dozens of flies buzzing about - but since they looked like normal house flies, we shrugged and gamely pressed on. I strapped on my pack, snapped a couple photos, and we set off on the trail. 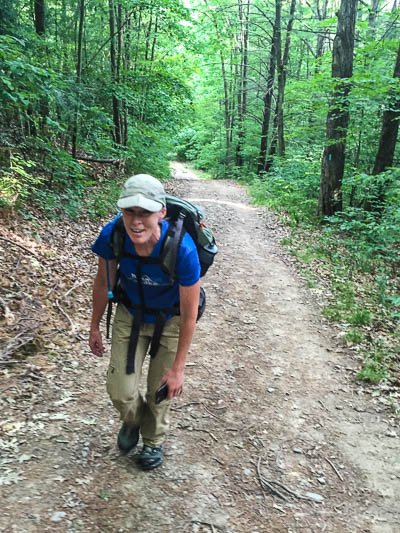 The fly count dropped once away from the parking lot, so we hiked briskly, encouraged that we might be able to outrun the horde. Not so. The flies teased, easing off in the woods but swarming in open areas along wide paths or old roads. And they started biting. Chris seemed to get the worst of it, with vicious hits that left trails of trickling blood on his hands and arms. I was surprised to get off scot-free since flying biting buggers usually find me delicious, but I got more than my fair share in the end. Around mile 4 I felt a little something on my shoulder blade and mused that perhaps one bit me through my shirt. I was right and wrong. Yes, I was bitten through the shirt, but it wasn’t just one, but seventeen. Seventeen bites on my shoulders and upper back!

A deer fly. It looks menacing this big (as it should!!) but when seen in the wild, it looks pretty harmless, just a titch larger than a normal house fly. Photo courtesy of Morguefile.

As you’ve doubtless surmised, these were no simple house flies. They were deer flies. Once home, I became a little obsessed with these menacing insects, determined to know my enemy, and wrote a quick guide explaining what deer flies are, why they bite, where they congregate, and how to keep them off you. 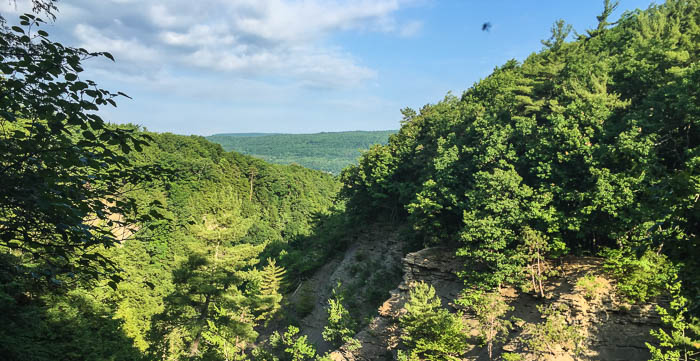 A view of Conklin Gully and beyond from the Hi Tor Blue Trail. Note the fly in the upper right - I can't believe we captured one on film!

Back to the hike! The trail started off with a bang, descending into Conklin gully and then rising to a viewpoint along the rim. With so little rain our streambed crossing was dry, but it could be impressive in wetter years. After a second stream crossing, the trail climbed on an old road, crossed paths with the Bristol Hills Trail, and continued to what would be a fantastic campsite under different circumstances with a lean-to, flat land for tents, pit toilet, bear canisters and poles, and large fire pit with a view. 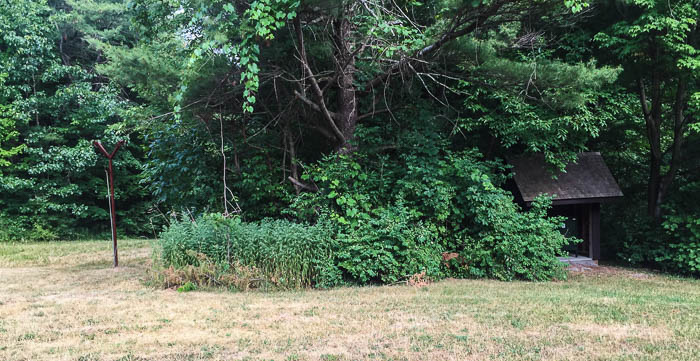 Assuming there are no deer flies or other pests (!) this would be a fantastic place to camp. It has a lean to, fire pit, pit toilet, bear canisters (on the right in this photo), and bear poles (on the left). If following the blue trail, curve to the right around the bear poles.

Two other trails converge at the campsite and blazes were buried in foliage, so Chris and I meandered a bit trying to find the Blue Trail (it was to the right - west - around the bear poles). Wandering this area was NOT FUN as deer flies tend to lurk on the edge of open spaces waiting for unsuspecting prey. The flies came out in force in the campsite and along the trail beyond, which was essentially a wide grassy road with trees lining each side. We hoped the Blue Trail would turn off in to the woods, but with no end in sight, we ditched and turned north onto the orange-blazed Bristol Hills Trail. 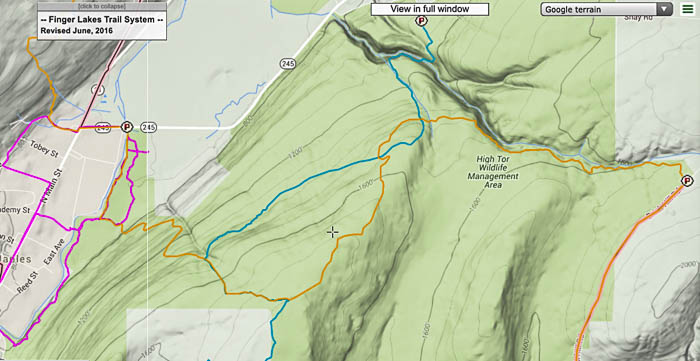 I'm so glad I had this screen shot on my phone of the Blue Trail interweaving with the orange Bristol Hills Trail. We started on blue from the north parking lot, but ditched it for orange the second time the two trails crossed paths.

The flies lessened the deeper we hiked into the woods, so we continued on the Bristol Hills Trail after it looped around and crossed the Blue Trail. The orange trail loosely follows the rim of Conklin Gully, offering periodic views into the gorge and sections with steep drop-offs - watch your step! 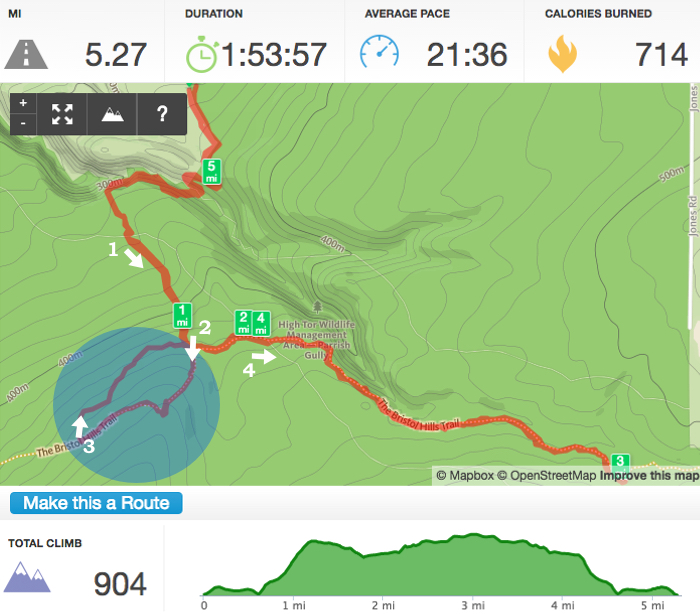 Though fewer in number, the flies continued to attack so we turned back when Runkeeper announced the 3 mile-mark and retraced our steps (excluding the lean-to loop). Our overall pace was impressive given the hills. Thank you deer flies, you provided excellent motivation and a sweat-inducing workout.

Normally road hiking feels a bit lame, but Cross Street had few cars, many vineyards, and glimpses of Lake Keuka below.

The hike totaled 5.3 miles and I was hoping for 10, so we headed towards home and Chris dropped me off at the intersection of Cross Street and Gibson Hill Road. We’ve mapped out running loops on the west side of Keuka, so knew exactly how to pick up additional mileage.  More than a few strange looks were thrown my way - I don’t recall ever seeing a backpacker hiking Cross Street or West Lake Road - but I hit my training mark and had the added benefit of toughening up my feet on 5 miles of asphalt! 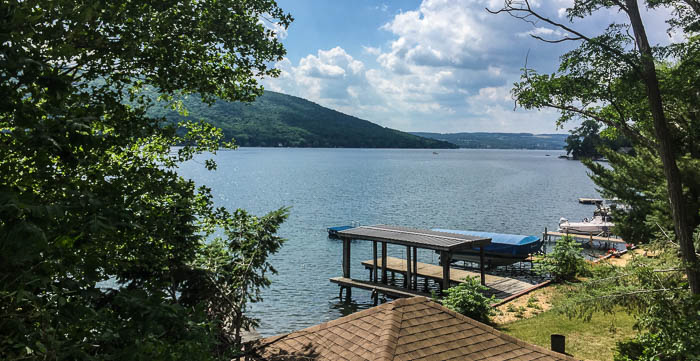 West Lake Road had more traffic but compensated with near constant views of the lake.

The views were pretty sweet too, both from Cross Street and the lake road. I love this region - rolling hills, pastoral farmland, thriving vineyards, glittering lakes, charming villages…. The Finger Lakes ROCK. 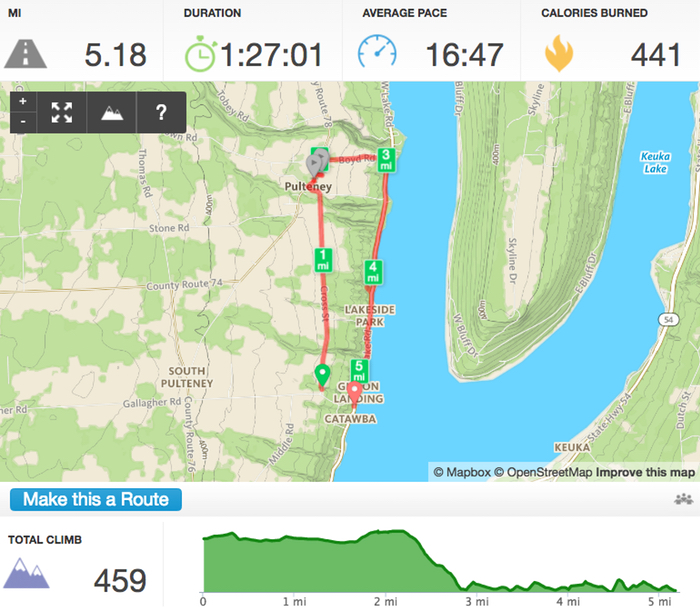 Runkeeper data for the second half of my hike. It's not quite a loop since Chris dropped me off up at Cross Street and I walked back to our cottage on the lake road below.

I wish we’d been able to complete the Blue Trail. Even though plagued by biting flies, Chris and I enjoyed the terrain and scenery and rated it above the Mitchellsville Gorge section of the FLT, at least for the small portion we hiked. There’s no way I’m trying it again any time soon (once bitten, twice shy) and I’m understandably a little nervous about my 11-miler next week, no matter where I end up. Here’s hoping deer fly season is over and done with!