My uncle has traveled Ireland more times than he can easily recollect and has forgotten more about the country than I think I will ever know. Out of this vast experience, there are just three sites he recommends to visitors without reservation and the Rock of Cashel is one. With Cahir Castle and the Swiss Cottage just 25 minutes from Cashel, our day seemed to plan itself!

On a clear day, the approach to the Rock of Cashel is breathtaking. Set on a hill 200 feet above the surrounding town, the monument dominates the landscape and towers gloriously from its limestone pedestal. The weather gods were mischievous though, and sent us hours of thick morning fog. We had no view driving in (boo!), but the fog burned off bit by bit treating us to a slow reveal of the countryside below. 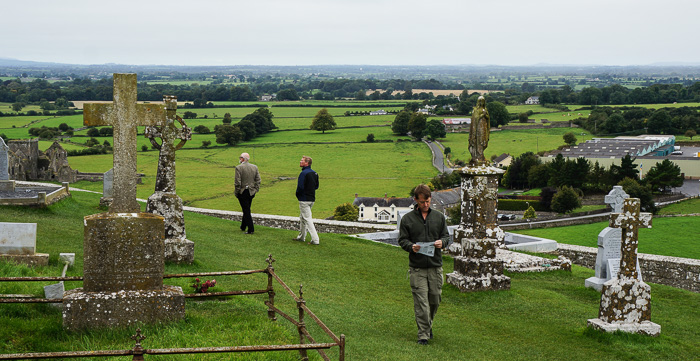 Wandering the grounds at the Rock of Cashel

Standing on high, you may wonder how this big old hill came to be. According to legend, St. Patrick had an epic battle with the devil and drove him out of Ireland. As the devil flew over the land in retreat, he swooped down in a fit of anger and took a bite out of a mountain-top now named “Devil’s Bit.” The awkward burden broke the devil’s teeth and the chunk dropped from his maw forming the Rock of Cashel…or the Rock of Cashel is the actually the devil’s tooth…or the devil grabbed a chunk from Devil’s Bit and threw it all the way to Cashel. Whatever the pesky details, I was told that scientists tested both Devil’s Bit and the Rock of Cashel and found that they are in no way related geologically. I’ve never seen primary source material for the testing though, so the legend wins! 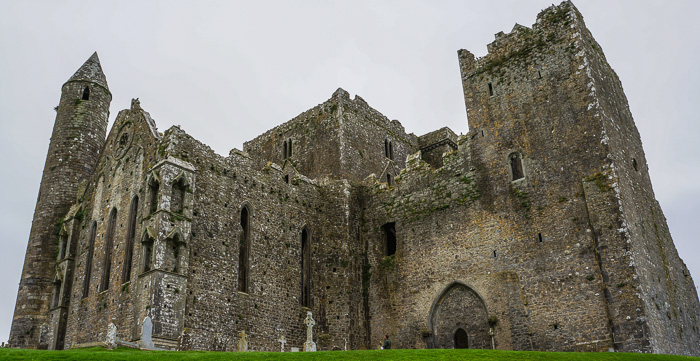 The Rock of Cashel

Back to our visit: We were once again blessed with a fantastic tour guide; George relayed the site’s historical importance and threw in interesting tidbits throughout the 45 minute tour. We started in the Hall of the Vicar’s Choral where choir members were so privileged, they were given a carved token which let them purchase anything they wanted or needed in town. They apparently took advantage and copied the token for family and friends; credit fraud in the 15th century!

Cormac’s Chapel is home to beautifully decorated archways, stone carvings, and the oldest and most important Romanesque wall paintings in Ireland. I wanted to linger in the dim, hushed setting but we pushed on to the 13th century cathedral, complete with secret passageways built to protect the Archbishop. 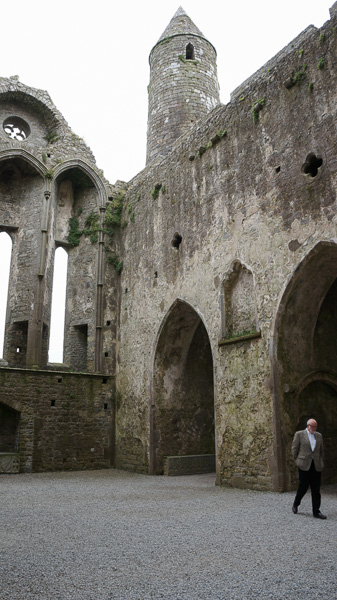 The cathedral at the Rock of Cashel. See the rectangular openings mid-way up the left-most wall? Those were part of a secret passageway!

As I mentioned above, the fog burned off during our tour; it was delightful to pass from the cathedral into the sunlight and soak in the view while hearing more of the 12th century round tower, cathedral walls (no, they weren’t shot with square canon balls lol!), and the cemetery’s lovely tombs and high crosses, one of which was struck by lightning and tragically destroyed in the 1970’s. We finished off in front of the 12th century Cross of St. Patrick and I don’t know what surprised me more: the fact that the pedestal was built with an ancient hidey-hole, or that the cross outside was a replica (the original is inside for protection). Great fake! So good it made me question “real, or not real?” on many other stops throughout Ireland. 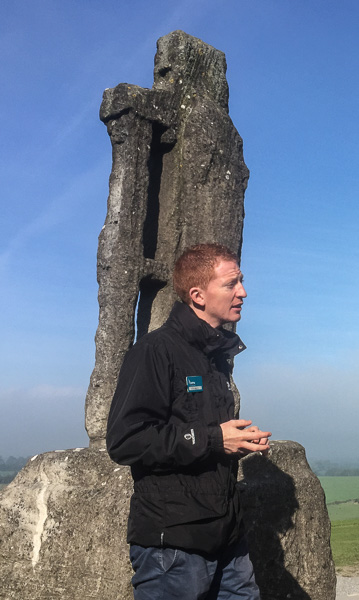 Our tour guide with a replica of St. Patrick's Cross

I agree with Uncle Bill; I’ve visited twice and would gladly come again.

You know, you see so many castles in Ireland they can start to run together in the brain. Still, I like to visit each because something always stands out. What’s unique about Cahir Castle? After concentrated thought (I'm writing this a solid month after we visited!) it finally came to me: superb defenses; layers upon layers of defenses. 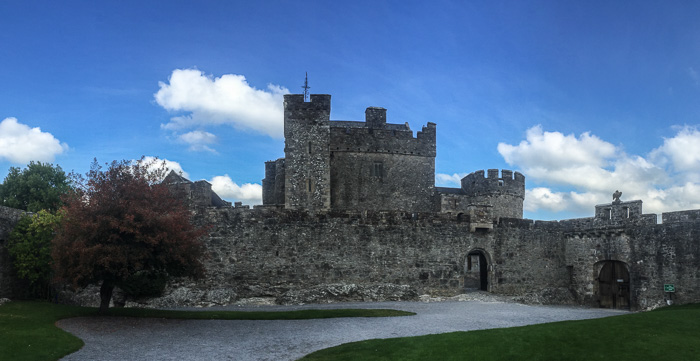 One of the inner courtyards at Cahir Castle

Cahir Castle is one of the largest and best preserved medieval castles in Ireland. Like many sites, this castle went through stages of development over the centuries. What started as an ancient stone fort eventually grew into one of the most defensible castles of its time; it was considered impregnable until heavy canon came into use. What made it so good? To start, it was set on an island in the River Suir and made great use of the rocky terrain. To storm the castle, attackers would need to conquer thick stone walls fit with battlements, machicolations, and arrow loops. Next up, the portcullis led to the “trapping area”, a long narrow passage which could be attacked from above. If attackers somehow made it into the inner courtyard, they’d contend with low doors, narrow passages, clockwise spiral staircases (better for defenders), murder holes, and stumble steps built with differing heights and depths. 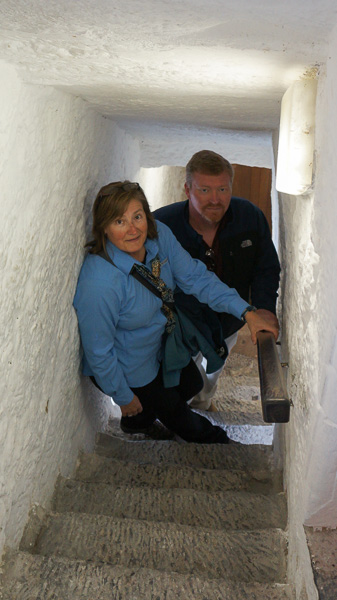 Dave and Lisa, checking out the castle defenses

This castle is fun to explore. It’s extensive enough that we could run around and get a feel for the inner defenses. Beware tall/big folks; the castle is built to defeat you so you’re at a serious disadvantage! If you go, be sure to keep searching until you find the room above the portcullis. You can see the portcullis machinery and also look down through murder holes at unsuspecting “victims” passing underneath. Heh heh heh. Fun fact: The portcullis is still operational (one of the few in Ireland) and its sound was used in the movie “Braveheart.” 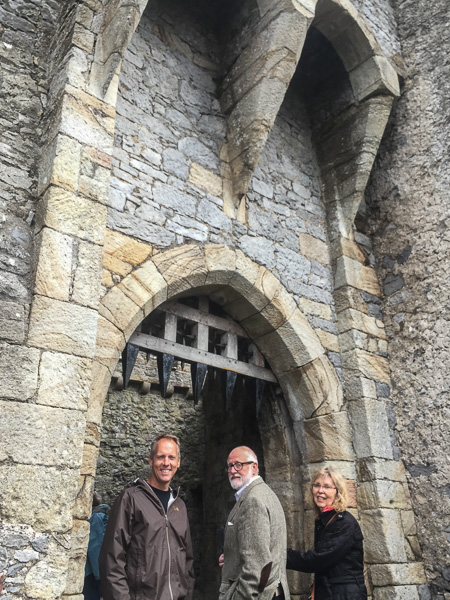 Unsuspecting victims! They think they will easily pass through the portcullis, but what awaits from the murder holes above?

There’s also loads of educational info in the restored rooms. My favorite is the huge miniatures display; press buttons and areas light up in turn to give a step-by-step account of (I think!) the 3-day siege of 1599. 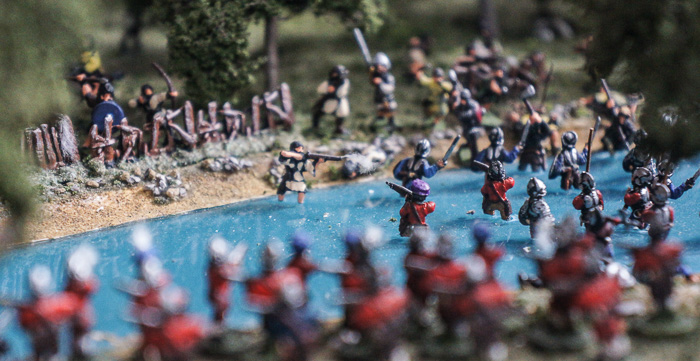 Part of the miniatures display at Cahir Castle

If you travel Ireland for any length of time, you’ll see no end of castles, abbeys, and forts, but the Swiss Cottage is one of a kind. It was built in 1810 for Lord and Lady Cahir, aka Richard and Emily Butler, the owners of Cahir Castle. Incidentally, these Butlers are descendants of the same powerful Butler family who owned Kilkenny Castle. Impressive family tree.

I tell you, this is one crazy cottage. It’s a cottage orné, or ornamental cottage, popular in the early 19th century. The idea was to have a rustic cottage that blended in so seamlessly with the surrounding landscape, it seemed to be part of nature. Decorations follow natural themes of wood, flowers and vines. To mimic the irregularities in nature, doors and windows are all different shapes and sizes, the roof isn’t level, and interior walls and window wells are built at odd angles. It was all rather uncomfortable for me; I need more symmetry and right angles! 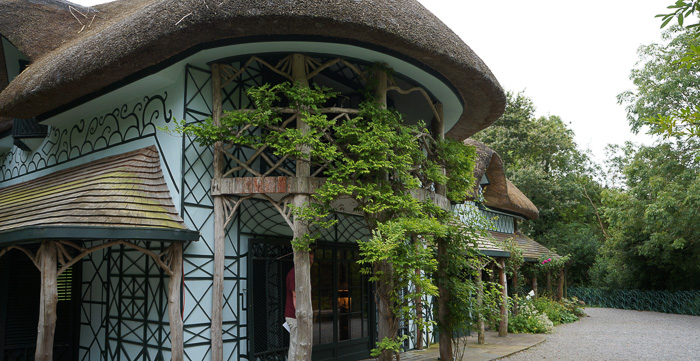 The cottage was built as a retreat and a place for the Butlers to entertain. They didn’t impress their guests with fancy finery; no, they did exactly the opposite. It was all the rage to dress like peasants, escape to a humble cottage, and live the simple life. Ironically, the cottage was built with the finest materials, but then treated to look rugged. That plain, brown-painted staircase? It’s actually built of mahogany! And while the Butlers and guests were acting like peasants, they had a full wait staff tending to their every need. Absurd.

The cottage is only accessible with a 30-minute guided tour. Note that the main entrance has quite a few stairs and is a decent walk from the parking lot. If this seems challenging, follow the handicapped access signs to an alternate lot. The small lot may be full, but it’s still useful as a drop-off. And for the more energetic travelers, the Coronation Walk is a walking path that connects Cahir Castle and the Swiss Cottage.

One of many wood sculptures in the park behind Cahir Castle

This was a lovely day trip; we saw all three sites and had plenty of time for a relaxing lunch in Cahir.

Finally, what are the other two sites Uncle Bill holds in high regard? Newgrange and Glendalough. Gorgeous surroundings, historically significant, fascinating stories…winners all around.