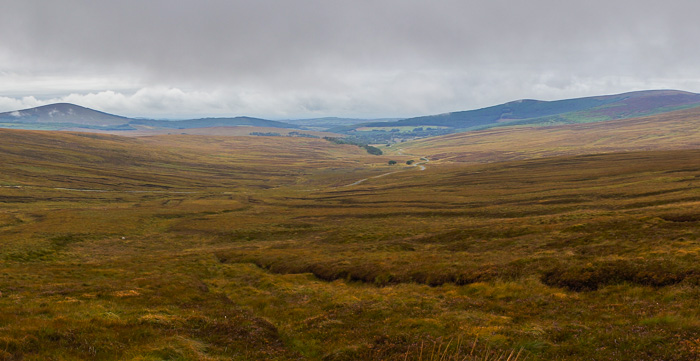 I find myself dumbfounded yet again. How can this relatively small island offer such a richly varied landscape? Sheer ocean cliffs, quilted valleys, the stark and surreal Burren…. Just when I think I’ve seen it all, along come the Wicklows where rusty heath-covered foothills give way to mirrored lakes nestled amongst lush forested mountainsides. It is here in the spectacular valley of Glendalough that St. Kevin spent seven years in quiet contemplation. He emerged from his hermitage to establish a monastery that would eventually become one of the most important monastic settlements in Ireland. 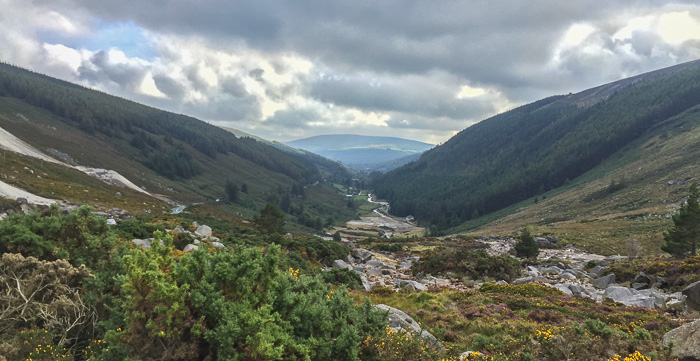 Traveling through the Wicklow Mountains

I first visited Glendalough on a misty, drizzly day in 2012 and fell in love; it’s the one place that I really really wanted Chris to see on this second trip to Ireland. There are wonderfully extensive ruins to explore including the gateway (the ancient entrance to the monastic city), a cathedral, a 30-meter round tower and several churches, but it’s the setting and history that make this a must-see in my book. 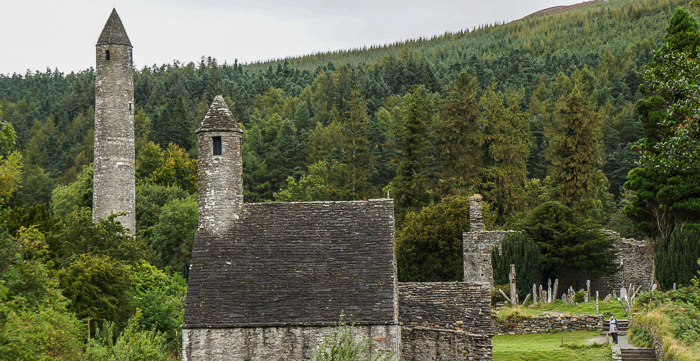 A few of the monastic ruins at Glendalough: the round tower, St. Kevin's church, and the cathedral

When we arrived at the visitor center after an easy one-hour drive from Dublin, we took in the movie and exhibits before heading to the ruins. I’m glad we spent the time! The center is nicely done and gives a concise history of St. Kevin and his monastic settlement. While I enjoyed learning more about monks and round tower construction, it was the story-telling exhibit that reeled me in, hook, line and sinker. Have you ever read about St. Kevin? There are so many fascinating tales - the man was amazing! It’s hard to restrain myself, but I’ll tell you just three of his legends. You’ll sense a theme; St. Kevin had a particular fondness for birds and animals.

When Kevin was just seven years old, he went to a small hut in the woods on the first day of Lent and knelt in prayer with arms outstretched. A blackbird landed on his open palm, built a nest, and laid eggs. Kevin didn’t want to disturb the nest so stood perfectly still for all of Lent; the blackbird fed Kevin berries and nuts so he wouldn’t starve. At the end of Lent, the hatchlings flew from the nest and Kevin returned home. Have you seen an image of St. Kevin in Ireland? There’s usually a blackbird sitting on his palm. 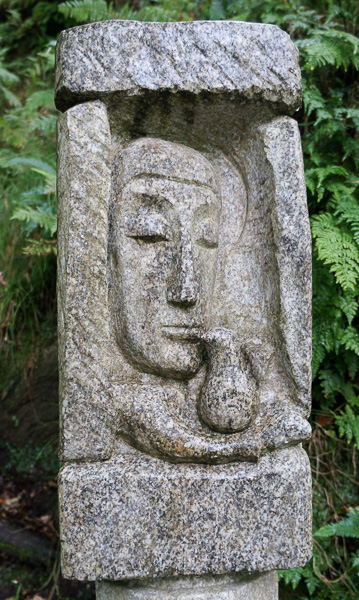 Before founding his monastery, Kevin spent seven years as a hermit living in a small cave in Glendalough. Nearby there was a farmer named Dima who owned a cow that would wander off. When the cow returned each day, she would produce incredible amounts of milk; 50 times that of the other cows! One day Dima resolved to find the cause and he followed the cow until she led him to Kevin’s cave. Dima watched in astonishment as the cow licked Kevin’s feet and clothes while the saint prayed. The simple farmer fell to his knees in the face of a miracle and begged Kevin to teach him of the Gospels. Kevin agreed to teach Dima and his family, then dozens of families, and finally established a monastery to educate his growing number of followers. 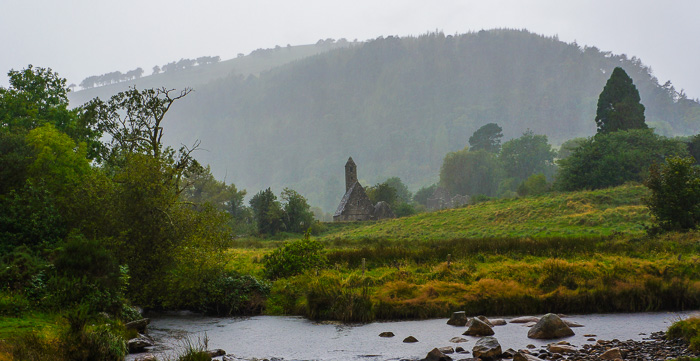 The monastic settlement at Glendalough, off in the misty distance

Hold up! Kevin wanted to establish a monastery but King O’Toole was a pagan and wouldn’t allow it. It just so happened that the king had a pet goose that he loved dearly. As time passed, the goose aged and eventually became so old and weak it couldn’t fly any more. The king heard of St. Kevin’s holy powers, sent for him, and asked that he make his beloved goose young again. Kevin agreed to help but asked for payment in return. He would heal the goose if the king would grant Kevin whatever lands the goose would fly over. Since the goose couldn’t fly any more, King O’Toole agreed. When Kevin touched the goose it grew young again and flew over the entire valley of Glendalough, thereby giving Kevin the land he needed for his monastery.

These legends are astounding, but the most boggling fact is the simplest: Kevin was born in 498 and died in 618; he lived to be 120 years old! If you’d like to read more about St. Kevin, this orthodox wiki is a good place to start. 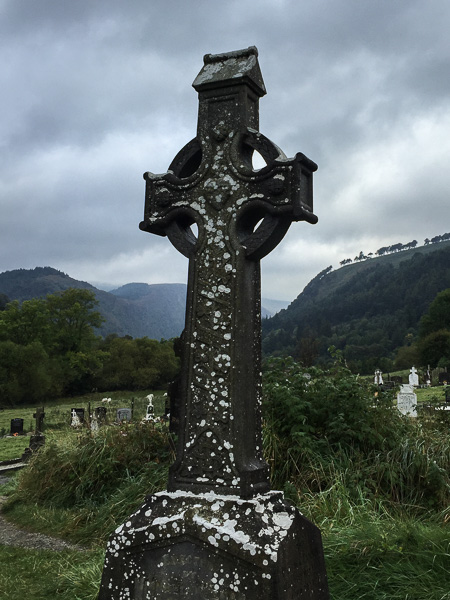 When I return to Glendalough - and I will return - I hope to spend time hiking the extensive trail network around the lakes and in the surrounding hills. We purchased a small trail map for €1 at the visitor center and learned of 9 marked trails in the area. Chris and Karen were inspired, split off from the group, and squeezed in a quick hike around Lower Lake. The rest of us took our time exploring the ruins and then stopped into the Glendalough Hotel for coffee and scones. 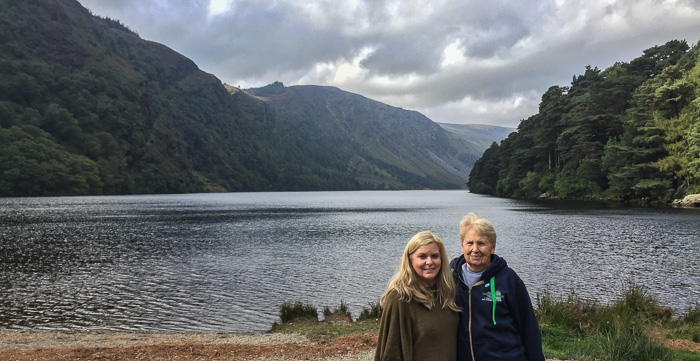 Jennifer and Lynne at the east end of Glendalough's Upper Lake