No gain in keeping, no loss in weeding out.

So said Pol Pot, speaking of his own people. Pol Pot, leader of the Khmer Rouge and the man responsible for one of the worst genocides of the 20th century. Pol Pot, a name I’d heard, yes, but knew embarrassingly little about. A precious gift of travel, though, is the opportunity to learn, and in the months leading up to our trip to Cambodia, I read, asked questions, watched movies, and tried to get my arms around a past that is intensely painful and difficult to comprehend. In learning, my heart broke, and it broke again in Phnom Penh.

Both the Tuol Sleng Genocide Museum (in Phnom Penh) and Choeung Ek Genocidal Center (just outside the city) help visitors gain some understanding of the horrors Cambodians faced, and provide an opportunity to pay respect to the millions who died under Pol Pot’s oppressive regime. Both are difficult to take in. Both are important to see, if only to bear witness.

An abbreviated history: In Cambodia, the period from 1975–1979 was considered the “Years of Zero” when the Khmer Rouge attempted to eradicate the past and remake the country under Pol Pot’s vision of an agrarian-based communist society. In the new Democratic Kampuchea, peasants and farm laborers were given elevated status, while the capitalist city-dwellers were considered corrupt and therefore reviled. All property, goods, land, and food belonged to Angkar (the “Organization”) and all work was for the good of Angkar. Anyone who could rise up and oppose the regime, or incite and inspire others to rise up, were enemies of the state. These so-called enemies included anyone who worked for the former Lon Nol government (expected in a regime change) but also entertainers, factory workers, doctors, teachers…anyone who was touched by capitalism or had an education. Even eyeglasses were considered a sign of the educated and therefore dangerous to wear.

During this roughly four year period, an estimated 2–3 million Cambodians - of a total population of 8 million - died due to forced labor, starvation, lack of medical care, torture, and execution. The Khmer Rouge designated some 150 prisons and 300 killing fields; Tuol Sleng and Choeung Ek are but one example of each, and are both now educational and memorial sites. 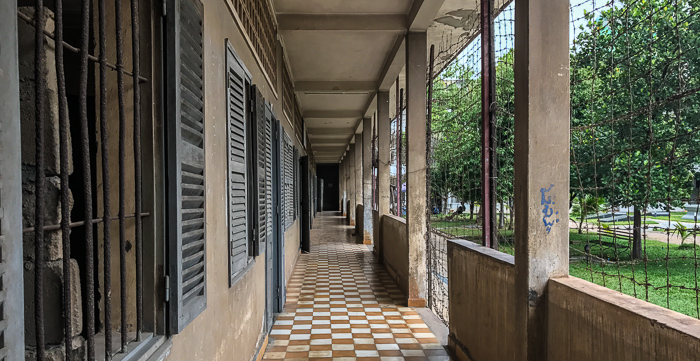 One of the buildings at Tuol Sleng, a former high school. Many school rooms (on the left) were used for interrogation. Others were further subdivided with brick or wood into cramped, single-person prison cells.

It’s fitting to visit Tuol Sleng first and then Choeng Ek, just as some 20,000 unfortunate souls did. Suspected enemies were typically first taken to Tuol Sleng (aka Security Prison 21, or S–21) to be held for interrogation. By design, interrogations always resulted in confession; if no confession was forthcoming, prisoners were tortured until the desired confession was produced. Many admitted to being CIA operatives or the like, and named others who were then rounded up for confession; a never-ending cycle. Today, most confessions are considered to be false, only given under extreme duress. Torture methods were barbaric and almost incomprehensibly committed by fellow countrymen, brother against brother (the Khmer Rouge were not an outside invading force, but native Cambodians). It is understood, however, that many guards also lived in abject fear for their own lives and the lives of their families. 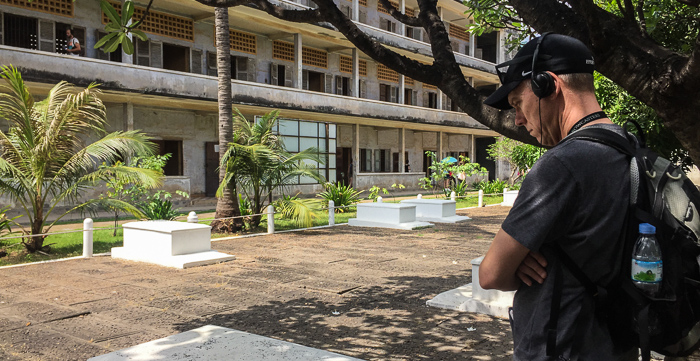 Chris in the center courtyard at Tuol Sleng, listening to the audio guide. He stands in front of 14 white graves, for the 14 unidentified victims left behind when the Khmer Rouge fled in 1979.

Many images linger after a visit to Tuol Sleng - the cramped cells, torture methods and devices, the paintings of Vann Nath (an artist, and one of only twelve who survived S–21) - but the photos are particularly haunting. There are boards and boards full of black and white photographs of posed and numbered prisoners; men, women and children, each with a different expression: shocked, defeated, numb, neutral, angry, defiant, a few actually smiling (unaware of what lay ahead, or fully aware?). The number of photos presented is staggering in itself, but even more so in context: they are a tiny fraction of those that passed through Tuol Sleng and one of 150 similar security prisons. 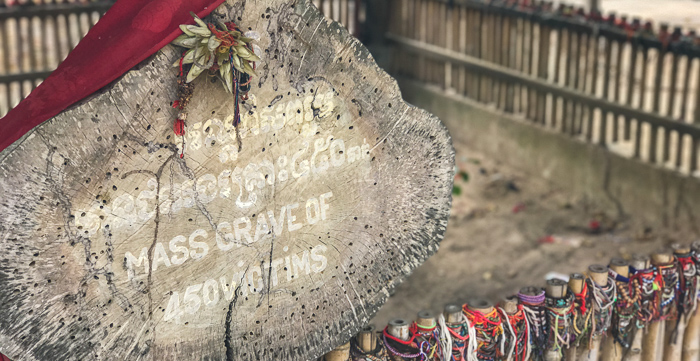 One of many mass graves at Choeung Ek.

While some prisoners died at Tuol Sleng, most were transported to Choeung Ek for execution. In the beginning, trucks arrived every few weeks with individuals, but as Pol-Pot’s paranoia grew so did the killings, and by 1978, trucks arrived nearly every day with up to 300 prisoners at a time, many of whom worked for the Khmer Rouge. No one was safe. After all, as Pol Pot said, “Better to kill an innocent by mistake than to spare an enemy by mistake.” Workers couldn’t keep up since killings were done by hand with crude instruments; ammunition was expensive or simply unavailable. Bodies were dumped in mass graves and covered in chemicals to mask the smell. 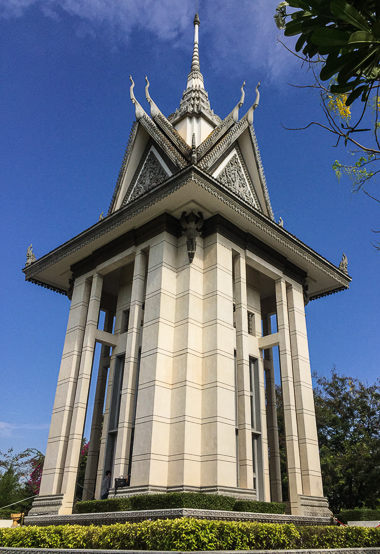 The memorial stupa at Choeung Ek, built to honor victims and to house their remains, though it contains a fraction of the total killed at the site. In the mass graves nearby, bones still rise to the surface and are collected.

These sites reveal layers upon layers of horror, and one startling fact is that no one was off limits: men, women, children, and even babies were brutally executed. Why children and babies? The answers can be found in another Pol Pot quote: “To kill the grass, you must also remove the root.” To kill one member of a family was not enough; all must be exterminated to destroy the corrupt influences and to ensure that none would rise up to take revenge. More startling figures: there were 300 killing fields and close to 20,000 mass graves throughout Cambodia.

Some online reviews of Tuol Sleng and Choeung Ek are quite critical, perhaps being unfairly compared to museums back home. Yes, both of these genocide centers are gritty, dirty, and a bit uncomfortable, but rightly so. If they had the spit and polish of modern museums, visitors would be even further removed from the grim history and circumstances. Plus, this nation was devastated and is recovering still; cut them some slack.  At both Tuol Sleng and Choeung Ek it’s essential to rent an audio guide (unless you’re with a guided tour). The audio guides are very well done, conveying much-needed background information and adding moving personal narratives that add depth and understanding. 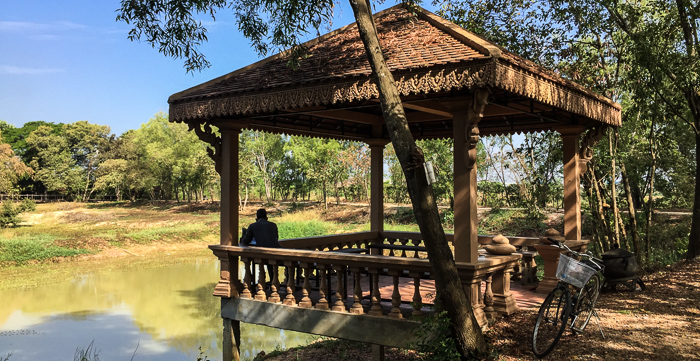 A small pond and shelter just beyond the mass graves at Choeung Ek. The shaded walk allows quiet time to reflect.

At Choeung Ek, I was particularly moved by one man’s story, delivered in five parts. Like other survivors, he lost many family members, and today considers all Cambodians his family. He feels that he is broken glass, and only he can put himself back together, but Cambodians are also broken as a people, and they must come together to heal. Very moving words considering there are many Cambodians alive today who beat, tortured, and killed their fellow countrymen. Each survivor will heal differently, of course, but many are somehow able to forgive former the Khmer Rouge, understanding that most Cambodians (both perpetrators and victims) lived in fear during Pol Pot’s reign of terror.

To see this healing in a very raw and personal way, watch Enemies of the People. In this documentary from 2009, investigative journalist Thet Sambath interviews former Khmer Rouge soldiers and leaders including Brother Number Two (Pol Pot’s second in command), Nuon Chea. Over years of genuine, caring, and patient relationship-building, Sambath gains the trust of Nuon Chea and former Khmer Rouge guards. They each agree to speak in the name of education (to ensure that history does not repeat itself) and describe their work, sometimes in chilling detail. In one scene, former guards are sitting by a field describing executions when interrupted by villagers passing by. The villagers then tell of the same killings, never realizing that some of the perpetrators are sitting right in front of them. In other footage, victims are given the chance to confront and question the former guards (by video conference) and the exchanges are surprisingly respectful. The process and revelations seem to provide some relief for all parties.

The Killing Fields (from 1984) is another excellent movie and tells the true story of two journalists in Cambodia in 1975–1979, an American, Sydney Schanberg, and a Cambodian, Dith Pran. It conveys the confusion and senseless terror of the time, and was intensely suspenseful to me since I’d just finished reading The Years of Zero (see below) so I knew more about the horrors to come for those denied evacuation.

It was moving and enlightening to read three different first-person accounts written by survivors of the Zero Years. Though all were children when their world turned upside-down in 1975, and they experienced similar circumstances in the broadest sense, each history was unique based on their family’s education and occupations, where they lived, where they were sent to work for Angkar, and how they each ultimately escaped the country.

I was very grateful meet Kilong about a month before our trip to Cambodia (Kilong and Chris once worked together) and came away from our brief visit feeling that everyone should have a monthly dose of Kilong - the man is an upbeat optimist, thrilled with the opportunities he’s been given, complimentary and uplifting to those around him, and forever striving to give back and make the world a better place. Just one example of his good work is his Golden Leaf Education Foundation, which “…leverages Cambodia’s history of genocide to foster peace and goodwill through renovating existing schools, building new schools, and providing educational supports such as school supplies and providing student uniforms.”

In closing, I think it’s important to note that in the books above, all three survivors were refugees taken in by families in the United States. Our nation feels unsettled, churning and seething, and appears to be on the precipice of momentous change. Immigration has been a hotbed of controversy, and while one nation can’t save the world entire, surely we can continue to find room for those yearning for the chance at a better life. I can’t offer an answer to this complex issue, but I do believe that education is key, notably one of the very things Pol Pot feared and sought to destroy. Ask questions. Talk to someone. Read a book. Watch a movie. Visit a museum. Travel. Knowledge and understanding knit our world together and lead to empathy for our fellow man.