Two weeks before our trip to Cambodia and Vietnam I realized I hadn’t learned any Khmer. Yikes! I’d focused solely on Vietnamese, partly because we’d spend four of our five weeks in Vietnam and partly because Duolingo (which I was using for Vietnamese) didn’t have a program for Khmer. In retrospect, I should have searched for another free language program like this or this.

When traveling to a foreign country it’s practical to learn a bit of the language - can’t assume that everyone speaks English - but also respectful. With little time left before the trip, I opted for a brute force method to learn Khmer, creating a hot-sheet of common words and phrases, then spending time with Google Translate to document phonetic spellings for each.

Khmer dependent vowels (first series). This is a screenshot from the Omniglot website (www.omniglot.com).

After diligently memorizing words and phrases I still had little confidence in my pronunciation. Khmer is difficult! The language has 33 consonants, 28 subscript consonants (to write the second consonant in a cluster), 14 independent vowels, and 42 dependent (or diacritic) vowels. Many sounds are almost sub-vocalized and my mouth and brain had a hard time making sense of it all.

Turns out my concerns were well founded. On our first day in Phnom Penh, I tried out “hello”, “thank you” and “good morning”, and all were close but the front desk staff kindly adjusted my pronunciation. Not bad, but then came the cell phone store. After purchasing a SIM card, I said “Have a nice day!” to our clerk and he stopped and stared, eyes wide, taken aback. He spoke little English and I spoke very poor Khmer (clearly!), but we established that I’d actually asked him if he had a girlfriend. Yup, I unwittingly hit on a young Cambodian man. Excellent start! 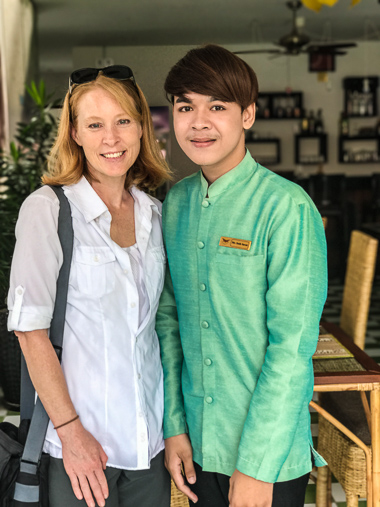 Julie with Savat, our waiter every morning at the Rei Angkor Boutique in Siem Reap.

A little unnerved, I cautiously continued to work on my Khmer, asking for help wherever I could find it and struck gold with our breakfast waiter in Siem Reap. Savat (pronounced Sow-ate) was delighted that I was trying to learn his language and eagerly helped, even giving spontaneous translations as we talked.

In the end, did I need Khmer? Not really. English wasn’t widely spoken but people in service industries (hotel, restaurant, transportation) had some, and signs and menus were translated. But I’d still strongly recommend learning as much as possible before traveling to Cambodia. Speaking even a few words of Khmer opened doors and led to warm interactions that wouldn’t have been possible otherwise. And it feels like the polite thing to do.

With that lead-up, here’s my hot-sheet. Much of it has been verified by Savat, but I didn’t grill him on every single word. Hopefully this will get you started, and when in Cambodia, find your own Savat and fine-tune! 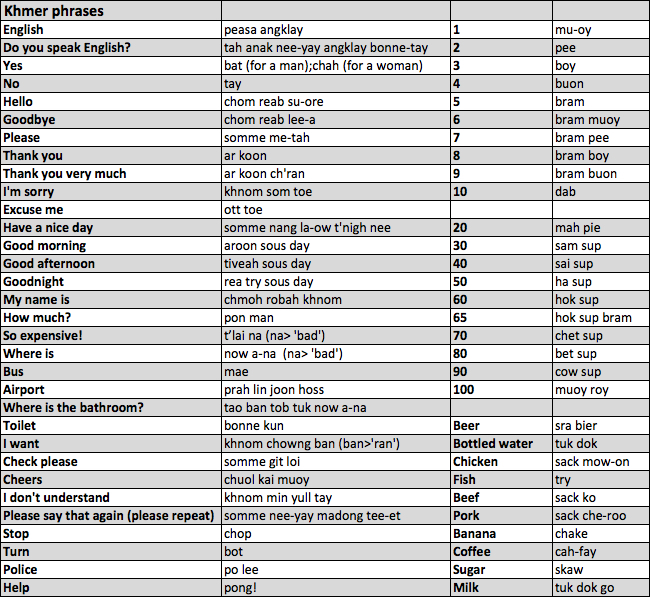 My hot-sheet of phonetically spelled Khmer words and phrases. It helps to listen to each using a tool like Google Translate.