We set our alarm early and had to drag ourselves out of bed. Who knew road trips could be so tiring? Even when logy we are pretty efficient, and arrived at Cafe Regis for breakfast by 7:30am. Cafe Regis is a popular community diner; one large table held a dozen men that seemed part of a regular breakfast group. The cafe charmed in many ways: the unique menu using local ingredients, the grocery store shelves around the perimeter sporting organic foods, and the bakery case offering tempting hand-made goodies. The meals were delicious and filling and gave us renewed energy for the road. 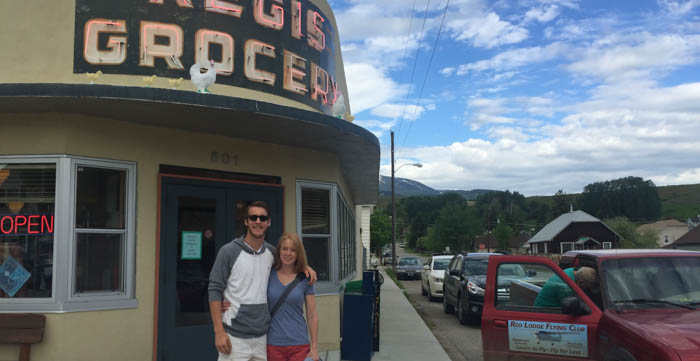 Within 40 minutes of driving, I was enthralled with a huge statue of a cowboy complete with stetson and rifle. Turns out he belongs with the Fort Rockvale Restaurant in Joliet. We'd just eaten so didn't stop, but TripAdvisor gives positive reviews. Although the area is undergoing massive road construction, this will be on my list for a future stop.

North of Joliet we joined I-90 once again. Aww - where did my beautiful drive go? The scenery turned ho-hum, but the company was entertaining and the the Beatles white album rocks, so the miles melted away. We made an unplanned stop after spying a sign for the Little Bighorn Battlefield National Monument. Since it was just a few minutes off the interstate we swung in; it was a fortuitous choice! The monument is well done and provides context for heading east to South Dakota. Did you know that the discovery of Black Hills gold is considered the precipitating event that led to the Battle of Little Bighorn? We parked at the Custer National Cemetery which holds veterans through the Vietnam war. 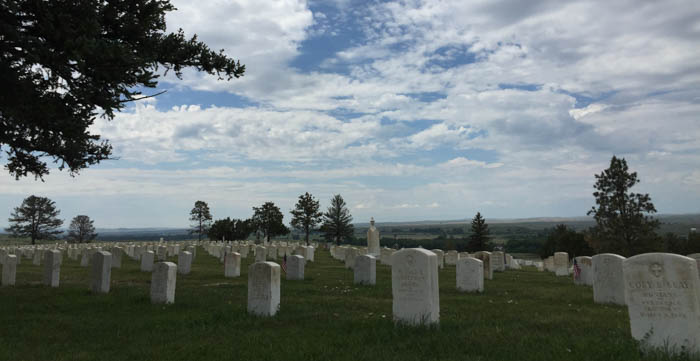 After a stroll through the cemetery to learn more and pay our respects, we arrived at the visitor center just in time for a Ranger talk. I was disappointed; I wanted to see the movie but it was canceled due to the talk. We lucked out with the Ranger though. He knew his history, had a dramatic flair for storytelling, and painted a vivid picture of the battle. He also offered a balanced perspective. As he stated, the details they share have changed through the years as they've gathered better information. His final message: There were no winners here. Soldiers lost their lives and the Indians lost their way of life. After the talk we explored Last Stand Hill (I was surprised to learn that five Custers lost their lives in this battle) and the Indian Memorial. Since pressed for time we didn't tour the visitor center or take the driving loop but we still gained new appreciation for this futile battle. 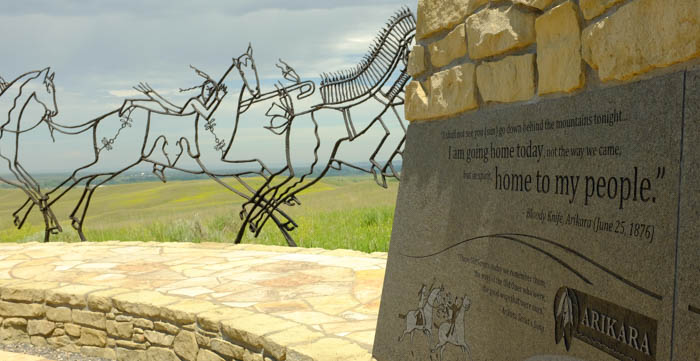 Indian Memorial at the Battle of Little Bighorn National Monument

Chris is the master restaurant finder and led us to Rollin' Coals barbecue in Buffalo, WY. [Aside: We were listening to the Beatles because of this stop. Hey Buffalo Bill... wait, what? Bungalow Bill?! Ha! Chris was incredulous at our lyrical inadequacy.] Rollin' Coals is a tiny place we almost blew right by, but the BBQ was moist and tender and we enjoyed trying each of the 6 sauces on the table. We didn't have room for dessert, but other patrons came just for the ice cream from Lickity Splits. Just before Mt. Rushmore, we passed through Custer. It's impossible to miss the Flintsones Bedrock City. We didn't stop, but if we had a little more time I would have! It looks kitschy, but having grown up with the Flintstones, I'd be delighted to have a snack at the Drive-In and pay $10 for the theme park. TripAdvisor confirms there are few activities in the park so it's a place to soak up the Flintstones and stretch your legs.

As we drove on, low rolling green hills gave way to high hills, rocky outcroppings, and foliage of purple, orange and green. We wound up and up and finally...Mt. Rushmore! I visited once in the early 90s and there's no comparison; the park has been overhauled and everything is first-rate. The entrance alone is impressive, regarding the massive Rushmore carvings while strolling through the Avenue of Flags. The Lincoln Borglum Museum shows a helpful overview movie and the additional displays are concise and informative. We could only walk half of the Presidents Trail since one side was closed for construction of a new youth exploration area, but it allowed us to get closer for a fun photo-op. Rushmore is easy on the wallet; the only fee charged was $11 for parking. Another time I'd love to see the nightly flag and lighting ceremony. It begins at 8pm though, so we'd need to stay close by or be prepared for late-night driving. 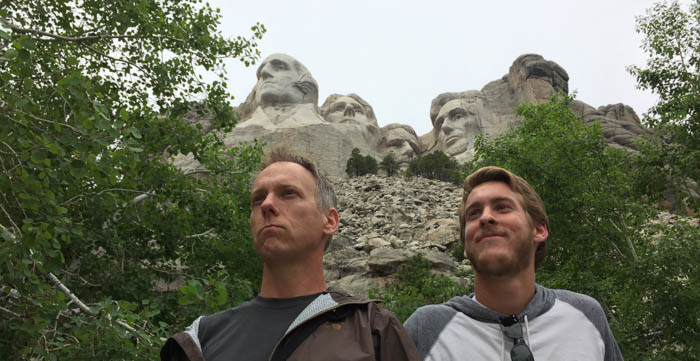 We pushed on, but travelers be forewarned! Once past Rapid City, dining and lodging options are few and far between due to the Badlands National Park and Buffalo Gap National Grassland. We rolled in to Kadoka at about 8pm and went straight to Club 27 for dinner. The food and service were lacking but we were relieved to find a place open and serving. We still needed a place to stay and our server suggested America's Best Value Inn. We got the last room and it was clean and well-appointed. The free breakfast in the morning offered the typical cereals and drinks but also hard boiled eggs and biscuits and gravy.