If only we could talk to the animals! Today will be remembered as much for the cats, donkey and sheep as much as the scenery, and that’s really saying something. My goodness, this stretch of the Dingle Way was outstanding. 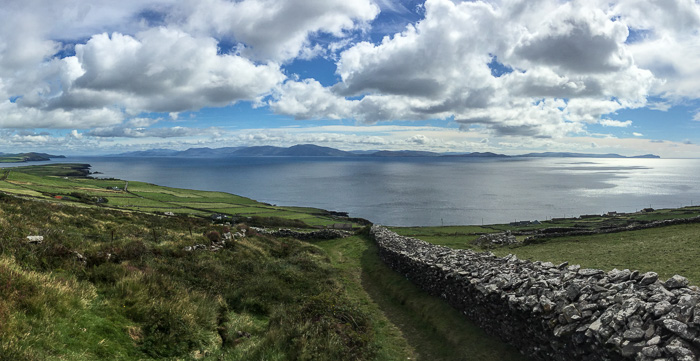 View of the Iveragh peninsula from the Dingle Way

You know, I look back on what I’ve posted each day and both the writing and images fall short. I can’t find the adjectives to adequately describe my emotions and no photo can capture what these eyes have seen. And then today. Psh. I should start by Googling “phenomenal synonym” and start working through the list. Remarkable, exceptional, extraordinary, … 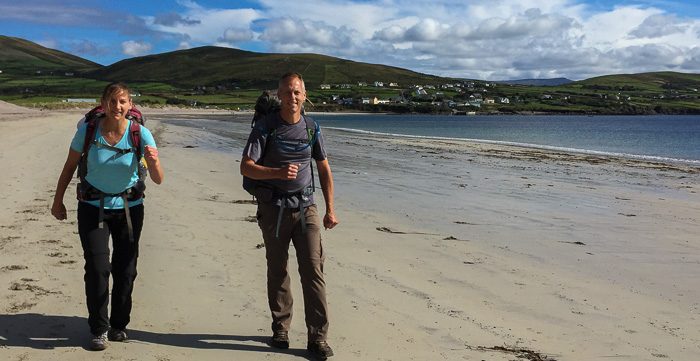 Chris and Karen striking a good pace outside Ventry

This was our best day on the trail; everything leveled up. We had my long-time best friend Karen join us (we go back to gawky awkward middle school band days). With a party of three who hadn’t seen each other in 6 months, conversation took on a new vitality. The weather was perfection; clear sky, a few high clouds, mid-sixties, and a constant light breeze. We hiked in t-shirts all day and basked in the sun. Our hike started at sea level in Dingle and soon reached a relaxing beach walk. From there, we began to climb - not a lot, but just enough. Some days, climbing can be a burden, but not today. I gave a little squeal every time we turned uphill because I knew - no doubt - the payoff was going to be [insert synonym from above]. 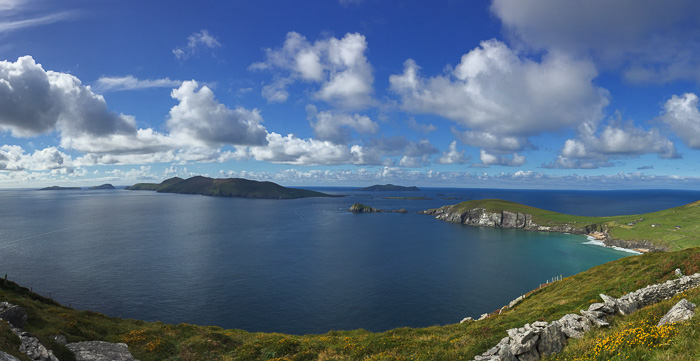 For the last 6 miles of the hike today, we hovered around 800 feet. Our ever present views of the Iveragh peninsula and the Skellig Islands were joined by a slow reveal of the Blasket Islands and Slea Head. In. cre. di. ble. At times, we just had to stop and stare. We were even able to climb down to an ancient clochán - Karen’s first! 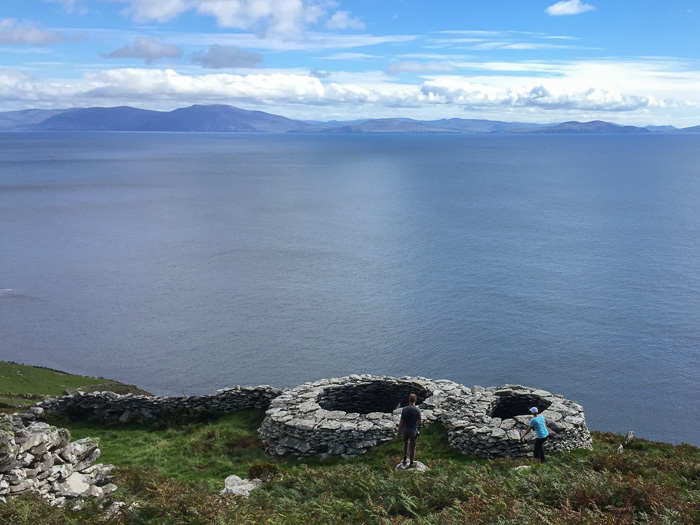 Chris and Karen admiring a clochan

Back to the animals. These are definitely “you had to be there” moments, but I’ll try to describe nonetheless. First the cats. We were looking for a place to stop for lunch and settled on a stone wall in front of an old house and farm enclosure. We immediately encountered three cats. Whitey was standoffish and never came round. Little Calico was adorable but skittish and didn’t seem to understand humans. Ginger…Ginger cat was the winner. We turned off the main road and took just a few steps toward the intended sittin wall when Ginger rounded the path from the other direction. He was trotting intently with solid eye contact and a determined air. Sure enough, he kept a steady pace and as I dropped my pack, he hit my legs with force. He didn’t just nudge up. No, this guy knew how to love on people. He wound between all of our legs, giving a little croak every now and again (poor guy didn’t have much of a voice). Turns out he was hungry too and hopeful for some junk food from his new buddies. He wasn’t too pushy, so Chris complied and we all laughed at the resounding crunch as he lit into our kettle crisps. He kept us company the whole time, and even Little Calico warmed toward the end. Still, we said our farewells and pushed on. 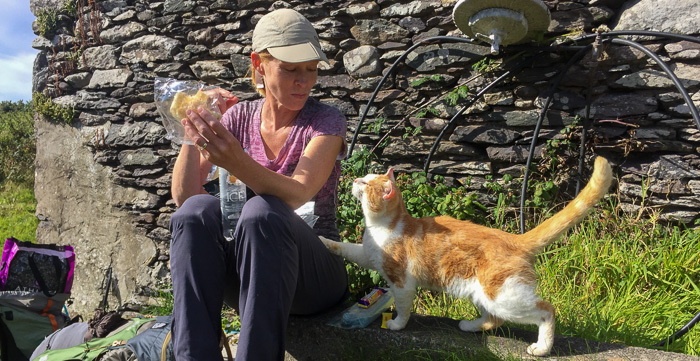 Julie protecting her sandwich from the persuasive Ginger cat :)

Then came donkey. We’ve had a lot of donkey encounters, with many super friendly, trotting to the gate for grass and love. I was understandably hopeful, so after passing an enclosure with two cute donkeys, I veered right, approached the gate, and started chatting with Maria. She looked up, paused, and then….I’m laughing right now, I don’t know how to describe it. She started with kind of a low moan that slooooowly revved up and kept going, and going, and going, and slooooowly crescendoed into full-on extended braying. My reaction to her was phased. I started withe wide-eyed surprise, moved into uncontrollable giggling, and then slowly backed away as I couldn’t determine if she was friendly, frightened, or mentally imbalanced. I later named her Maria after Chris said he was hopeful her initial low moaning was leading to a rousing rendition of “…the hills are alive….” 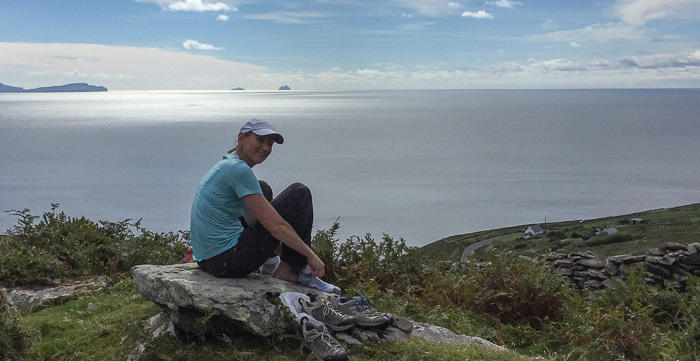 Sorry no pic of the donkey! This is Karen taking a wee break on the Dingle Way with the Skelligs in the distance

Finally, sheep. They were everywhere. The trail went straight through hilly pastures and they surrounded us, often just a few feet away contentedly munching in the brush. We talked to them all, and while friendly and somewhat interested, they ran when we got close. Chris was in the lead as we were hiking uphill on a small trail with stone wall to our left and thick brush to the right. As he approached a gentle curve in the trail, he startled a small group (flocklet?) and they scattered quickly. Apparently there was one young guy that had drifted a bit further up the trail. The main group dispersed and this guy must have heard the commotion and tried to catch up. Just as Chris rounded the corner, he looked up and saw Timmy charging down the trail full speed. Timmy looked up, saw Chris, and did one of those cartoon stops with his forelegs straight out, body leaning back, and eyes wide with what we can only assume was surprise. He came to a skidding stop on a large rock just a couple feet in front of Chris. They shared a frozen moment, eyes locked, before Timmy turned and disappeared into the brush. Why is he “Timmy”? I don’t know. It’s Chris’s sheep so he got to name him. 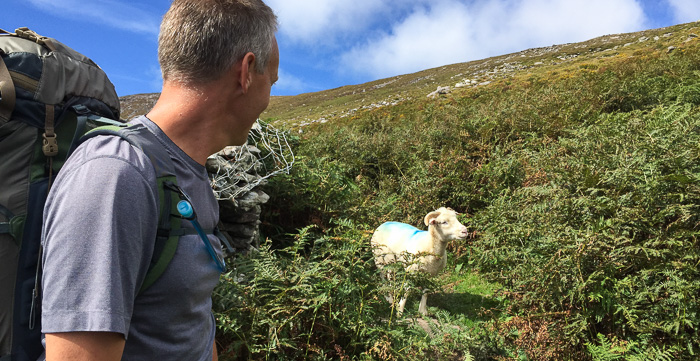 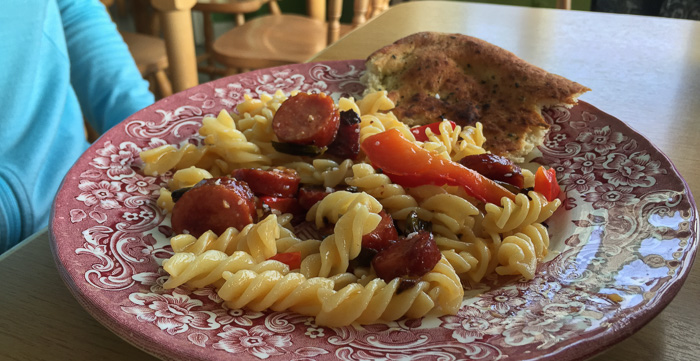 The dinner we cooked at our hostel after hiking from Dingle to Dunquin. Delicious!