So said our Belfast City Hall tour guide, and he may have a point. But the end of the day, I was bone tired and my feet felt bruised from miles of walking, but what a day it was. Belfast is an interesting city rich with history, so of course we enjoyed touring and learning. Years from now I might remember tidbits about the Titanic, Linen Hall and the Peace Wall, but there’s no doubt I’ll remember the people we met along the way. 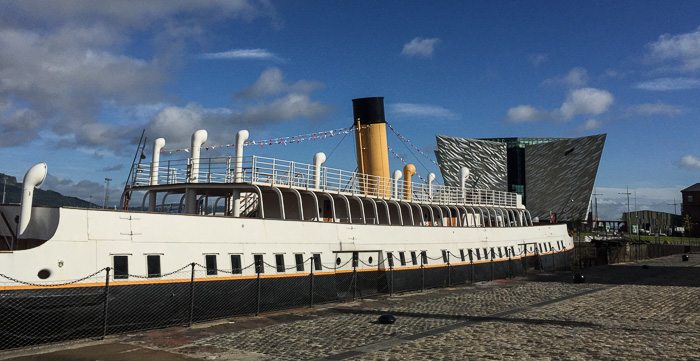 Billy: We passed St. George’s Church when walking from the Titanic Museum to Belfast City Hall. It looked pretty and interesting so decided to pop in for a 5-minute look-see; 45 minutes later we were still chatting away! A rumpled and rambling Billy (aka William MacArthur) approached us inside and asked “Have you sat in King William’s chair?” Uh, no, we had no idea there was such a thing. Chris sat in the chair, and that was the beginning of one heck of a history lesson touching on George Walker (Billy disputed two of Chris’s facts), the Earl of Bristol, and the inception of the Army Rangers); you should have seen Billy’s face when we didn’t know of St. Columba! 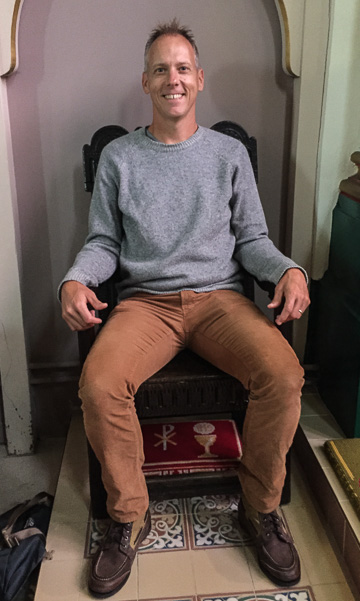 I assumed Billy was a historian by trade, but no, just an insurance agent with a passion for history. As tired as a I was at that point (we had rude loud neighbors the night before and precious little sleep), running into Billy seemed a blessing and a curse. I was completely delighted by him, but couldn’t take in a fraction of the knowledge, and was soon angling for escape. His parting words led us to The Crown Bar for lunch and a pint. Thank you again Billy, the mac & cheese was divine. 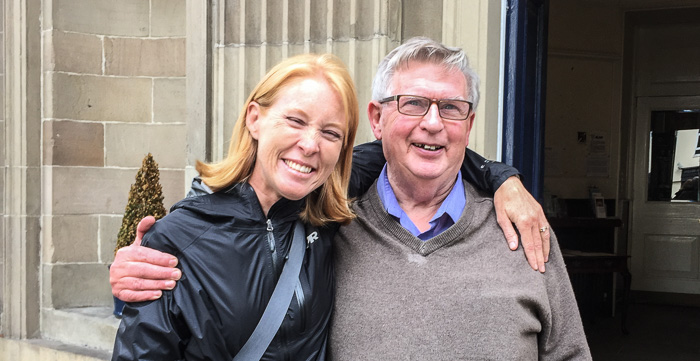 Julie and Billy in front of St. George's Church in Belfast

Our City Hall tour guide: I won’t remember our guide for the personal interaction, but for two things he said. One I already quoted above, and the second was this: “Do you know what we say about the Titanic here in Belfast? …. It was fine when it left here.” In that statement he perfectly captured my feeling of the Titanic Experience and even Belfast in general - pride with underlying sadness and disappointment. I left the Titanic museum with a much better understanding of the people who poured their hearts and souls into building that magnificent ship, but I never once saw a detailed exhibit of how and why she sunk. It was as if that part were too painful to confront. And when walking the streets to take in the murals on both sides of the Peace Wall, I felt that same mixture of pride and pain. 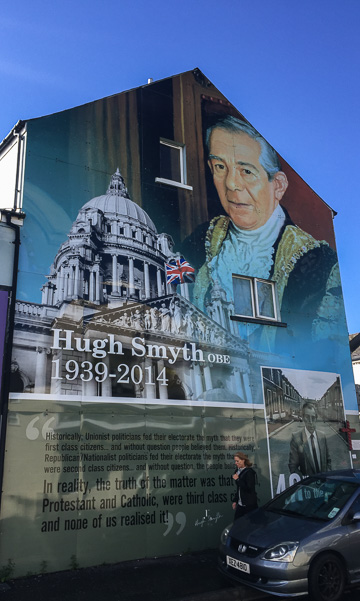 I’m so glad we chose to walk today. We certainly would have seen more if we’d taken the popular Black Cab tour, but there’s something more intimate about taking the slow road on foot. We even chanced upon another highlight when we stopped for a bathroom break and a pint (of course) at Davitts, a bar rich with history.

That guy in the alley: Yet another argument for walking. If we’d taken a cab or a bus, we would never have ducked down an alley and come across a bunch of guys with caged pigeons. Curiosity got the better of us, and when I sidled up, smiled and asked “ So what’s this about then?” one friendly guy replied “Pigeon racing.” What?! The guys were checking in their pigeons to be transported to Dublin and then released to fly back to Belfast. Huh, who knew? 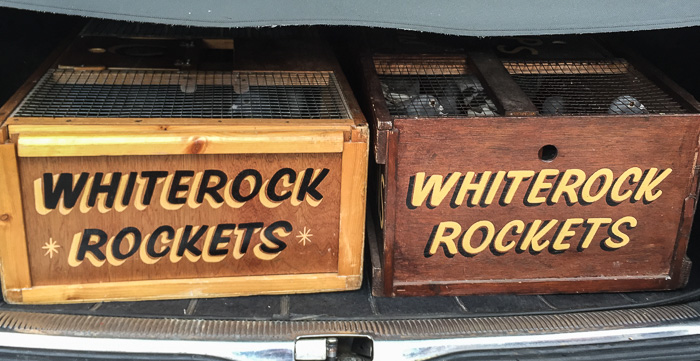 Pigeons waiting to be checked in for their big race

Liam and M: I was praying that once, just once during this 6 week trip,we’d have good craic listening to trad music in an Irish pub, and I got my perfect night on day 3! Chris researched options earlier in the day and led us to Fibber Magees, a 10 minute walk from our hostel. They had a live music, but in the form of a duo playing covers of American pop ballads - not exactly what we were looking for. Luckily Chris had an ace up his sleeve and the Fountain Bar was just 5 minutes away. When we arrived, there was a group of 7 musicians playing in one of the corner booths; their number swelled to 13 by the end of evening and could have been more given how many musicians were also in the crowd. The music was superb with guitars, drum, whistle, accordion, and harmonica; Chris and I especially enjoyed the dueling banjos. 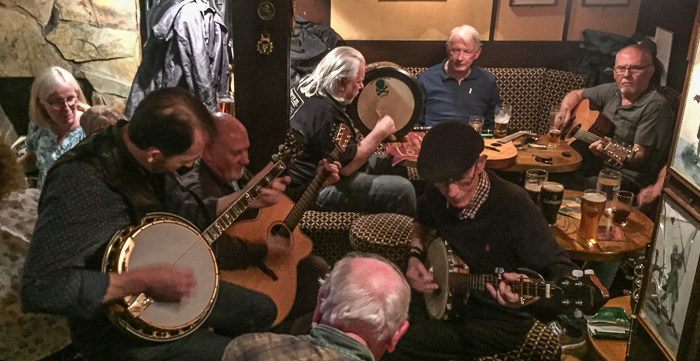 We listened happily in our own little world, but then a few niceties with Liam and M turned into evening-long conversations. At one point, Liam suddenly set down his pint, said “This one’s for you Julie”, joined the session, and sang Raglan Road having no idea it’s one of my favorites! He followed it with the Lakes of Pontchartrain. What a treat. I’ve no idea what M’s full name is, even after asking three times, but it made no difference. Late in the evening M mentioned Irish dancing and Chris interjected “Julie dances”. M’s eyebrows shot up, he offered me his hand, and we were off. What. A. Night. The icing on the cake came as we headed home. City Hall was illuminated with blue and yellow lights, casting a magical glow over an unforgettable evening.

Chris writes: I’ve been to a few cities over the years that are marked and even stigmatized by sectarian violence. I explored Bethlehem on one of my trips to Jerusalem and had the memorable experience of walking back through the West Bank area, including a pass through the wall, to old Jerusalem. As a tourist I’m conflicted about how much to talk about “troubles”. I don’t want to offend or be impolite in any way, but I’m so curious about individual perspectives. Just walking around and observing can be a great way to take it in and gain fresh perspective.

Julie and I made a similar journey in Belfast, walking from the Cathedral Quarter to the unionist and Protestant Shankill Road. This was our first glimpse at several of the famous Belfast murals.

Our experience with murals has usually been with street art aiming for a positive message, usually towards reconciliation, diversity, or tolerance. While I’m sure there are many such murals in Belfast, the majority we saw today were not.

The street is lined with prominent displays of the Union Jack, underscoring loyalty to the crown and affinity with the largely Protestant United Kingdom.

We then made a sharp left turn to continue our walk towards the Catholic area on the Falls Road, noted for its Republican and Irish Nationalist leaning. But to get to there we had to navigate around the Peace Wall, one of several in Northern Ireland that have a been around for about 45 years. There’s been discussion about taking these down, but apparently the residents still largely believe they are effective and want them to remain. 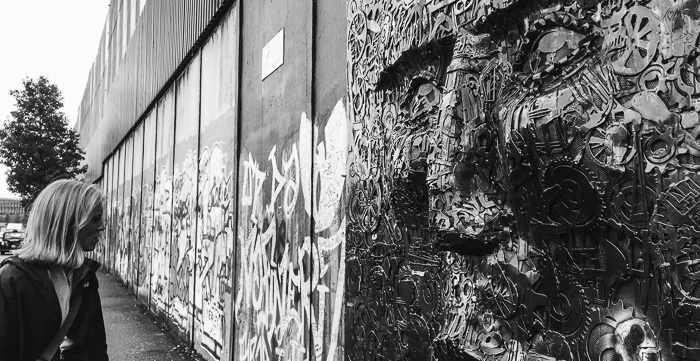 Julie reading notes written on the Peace Wall in Belfast

The Falls Road area seemed a little nicer and more welcoming. As Julie mentioned we did stop in a pub there, full of mostly middle aged men holding race books for horse races going on that day. We saw gambling books about every other block in Belfast.

There’s looming concern about a return of the troubles. Words are being shouted across the aisle in parliament. The existence of inciting murals also says something: if they were ready for reconciliation, wouldn’t these be redone and turned into memorials with a message of forgiveness?

Regarding the two disputed facts of my descendant Rev George Walker: while I very much enjoyed our conversation with Billy, I’m not yet ready to concede these points. I plan to do more research in Derry to decide the questions:

As noted earlier, it was a long tiring day.  We were so hungry, we opted for a BOGO on take-out doner kebab. Food never tasted so good... 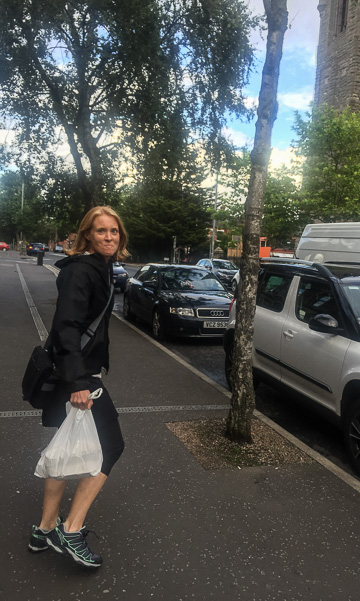 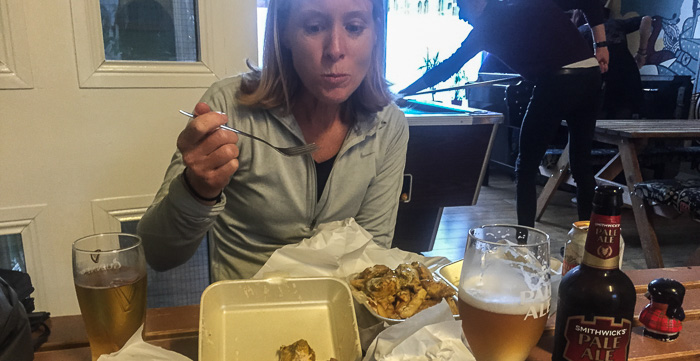