I wish I could report that we had a super-fun itinerary planned, but the day was mellow and uneventful. While Matthew slept in, Chris and I worked on the computer and played catch-up. As I sat in the hotel breakfast room and watched the rain come down in buckets, I was very glad for our late departure! When we finally left, the weather had calmed to a misty light drizzle. Our hotel is in a prime location for shopping and we hit both Target and Walmart. Matthew only needed moleskin and a toothbrush tube, but Chris and I knocked out a lengthy list for the cottages. The Beatles #1 hits playlist kept us company throughout the day and sparked some reminiscing. Did Chris used to sing the boys to sleep with Hey Jude? Yes, I said, that's how they memorized it so well. No, no, no, replied Matthew, that was Gold Rush (Neil Young). Hmmm, perhaps both? The day was also punctuated with lighthearted joking about R-Day.

Chris: "Looks like the weather will be perfect tomorrow."
Matthew: "Great! (pause) I'm sure they'll find some other way to make us miserable."

Matthew asked to see a movie so we headed to the Elite Cinema 6 in Chester. He decided a comedy was in order and chose Ted 2. What can I say? It was sophomoric and crude, but we all laughed out loud within the first 2 minutes. As usual, Matthew's instincts were spot-on; the movie was a fun diversion and it only cost $18 for the 3 of us - cheap! 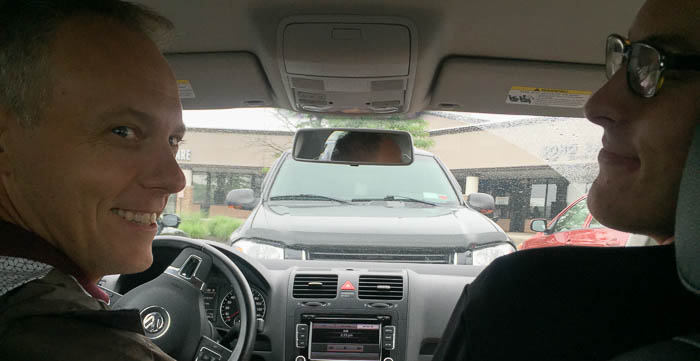 Chris and Matthew in the car after seeing a movie

After the movie, we navigated to the West Point community reception by way of Route 293. Along the way we passed many West Point landmarks including Camp Buckner and the Round Pond Recreation Area. With each sighting, the whole Army thing became more and more real!

We arrived at the community reception at the historic Thayer Hotel around 2:45pm. The quiet out front belied the bustle inside; the lower level reception area and grounds were packed with new cadets and their families. 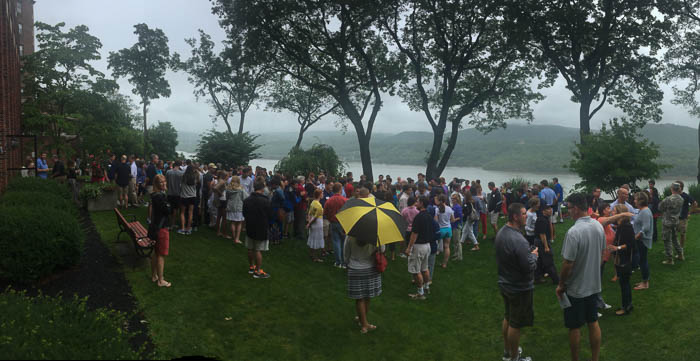 The West Point community reception at The Thayer Hotel

Once we stepped outside, Matthew made a beeline for a group of new cadets. He didn't know any of them, but introduced himself, settled in, and didn't budge from that area for 2 1/2 hours. 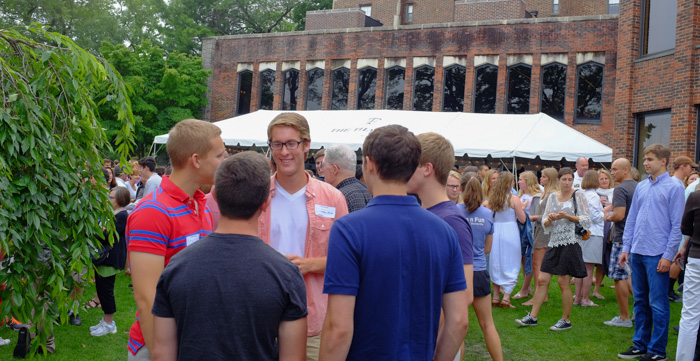 Matthew at the West Point community reception at The Thayer Hotel

Chris and I wandered and struck up conversations with parents and new cadets from Maryland, California, Washington and Texas; we even ran into Chris Brooks from Colorado Springs (!). The event officially ended at 5pm, but we were among the last to leave at 5:40. It was enjoyable for us all to meet new folks, but I couldn't help but notice the underlying tension in many new cadets. Yes, there were smiles and polite conversation, but also shuffling feet, clipped sentences and sideways glances; anticipation mixed with apprehension. Understandable. When every West Point cadet says that R-Day was an awful experience and one of the hardest days of their lives, it's hard to believe that somehow you'll be different. No one seems to escape unscathed. So it will be bad. But maybe, maybe, it won't be so bad.

From the reception, we drove directly to The Captain's Table for dinner.  The portions were generous and servers friendly, but that's not enough for me to come back. The food was bland and uninspired; there are better choices out there. 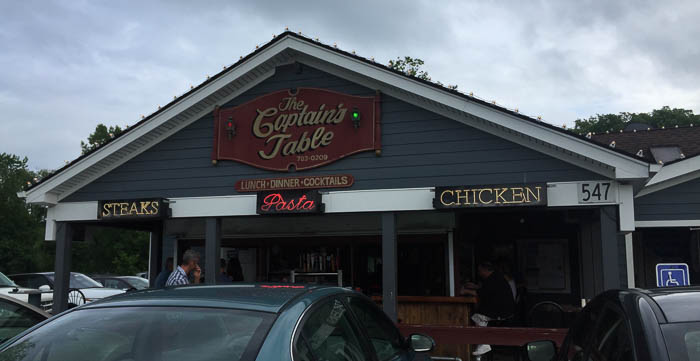 Though dinner was disappointing, we finished the day on a high note with a second visit to Mr. Cone. 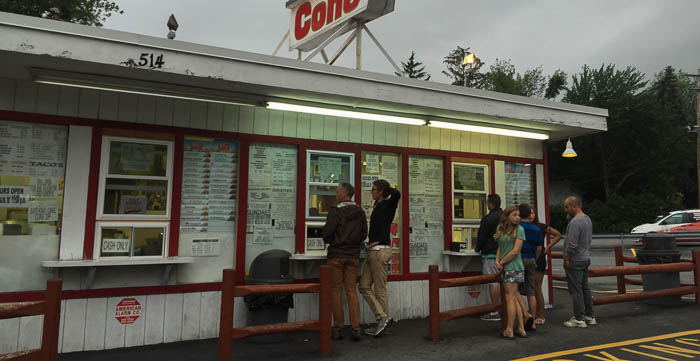 A second visit to Mr. Cone

When we flipped on the TV back at the hotel, Matthew was giddy to find Shrek 2 playing; he'd just watched Shrek at the lake. Loved it! Fingers crossed we'll all get a good night's sleep. We plan to check out by 8am; Matthew reports at 9:15.