This is it!  I'm kind of stunned that we're here. How did Matthew make it to R-Day unscathed given his all-or-nothing attitude towards sports?! Incredible. Chris and I fell asleep easily last night but slept fitfully; Matthew said he slept soundly but took a long time to drop off. As you'd expect, our morning started early with Matthew's alarm sounding at 6am.  By 7, he was polishing shoes and cleaning boots. 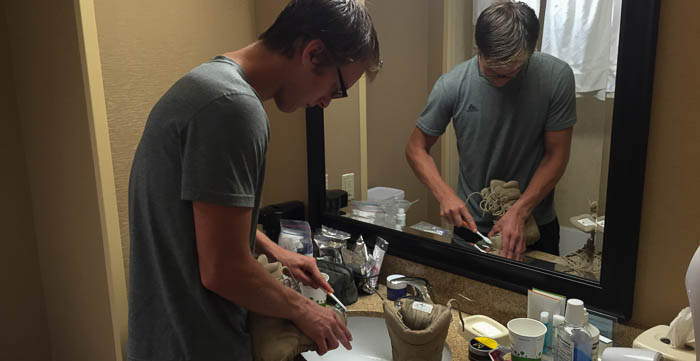 Apparently nervous energy made us extra-efficient; we were fully loaded and driving away by 7:40.  The Hampton Inn offered a complimentary full hot breakfast, but Matthew wanted to get away so we tried Bagel World in Monroe.  The shop is situated in a dying strip mall but don't let that dissuade you!  They have the best bagels we've had in a long time: slightly crisp outside, dense and chewy inside. We paid just $12 for 2 coffees and 4 bagels, 2 of which were generous sandwiches with egg, meat and cheese. Here we saw the first sign of Matthew's nerves - he could only finish half of his food. 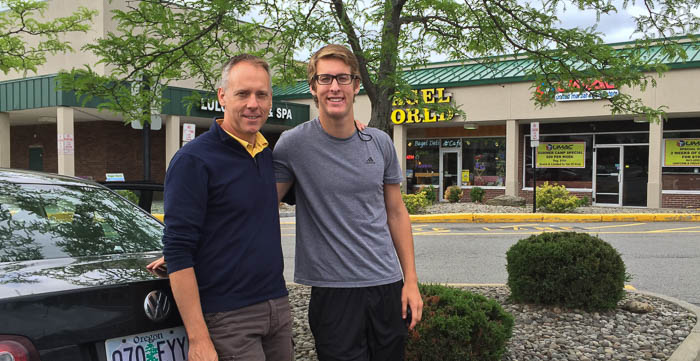 Chris and Matthew outside Bagel World

As we walked to the nearby McDonalds to use the restrooms, a man ran out from Bagel World with the purse I'd left behind. Can you imagine if I'd gotten all the way to the West Point gate only to find I didn't have my ID?! Close call, and a good reminder to have a photo of my ID on my iPhone. Who knows if the guard would have accepted it, but it's good to have backup.

We had the choice of entering West Point through one of two gates, Thayer or Stony Lonesome. We chose Stony Lonesome and sailed through right at 9am. Matthew had to report between 9:15 and 10:30 so we were right on track. 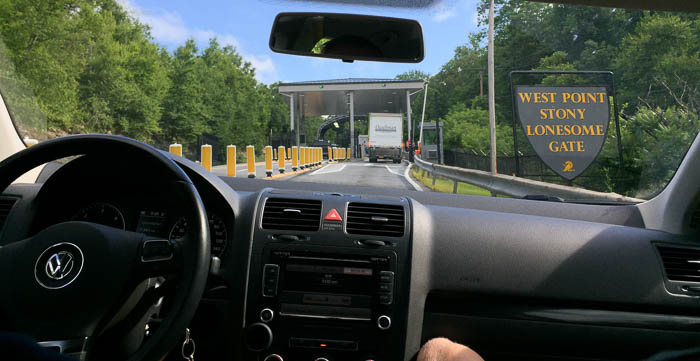 We were directed to Parking Lot A at Michie Stadium but it was full so were sent through a narrow connecting road to another. We got one of the last spots at the far end and walked all the way back to Lot A to catch a bus.  It wasn't a long wait; there were 15 school buses circling the parking lot. It's like they were prepared for some big event or something ;). 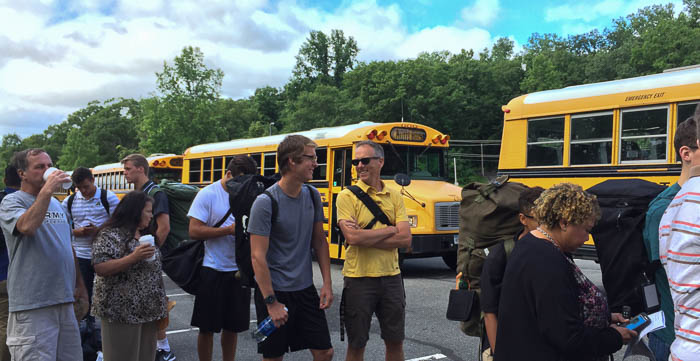 Our bus pulled up to Eisenhower (Ike) Hall at 9:30 and we proceeded to wait in line for an hour and 15 minutes. Believe it or not, the wait was pleasant. It was a lovely morning, and we were glad for the extra time with Matthew. He was fairly subdued, but still chatted a bit and joked. One of his best: he swears he is going to tell one of the cadet cadre that he is planning to cross-commission into the Navy. Ha! Choose your moment wisely Matthew and make sure it's worth it! 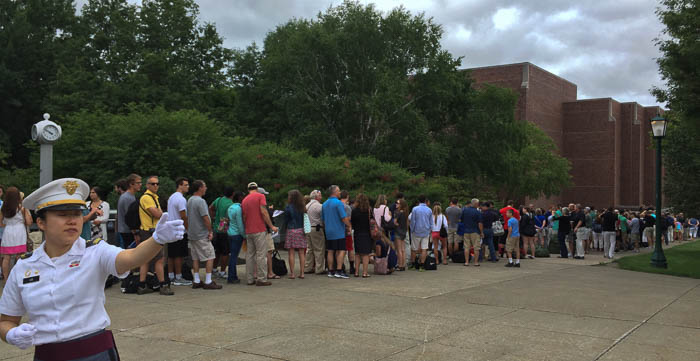 Chris and Matthew waiting in line outside Ike Hall

At times we could hear intense yelling from below as new cadets exited Ike Hall and their R-Day experience began in earnest. As we finally neared the front and Matthew's turn was imminent, a cadet yelled instructions and offered advice. 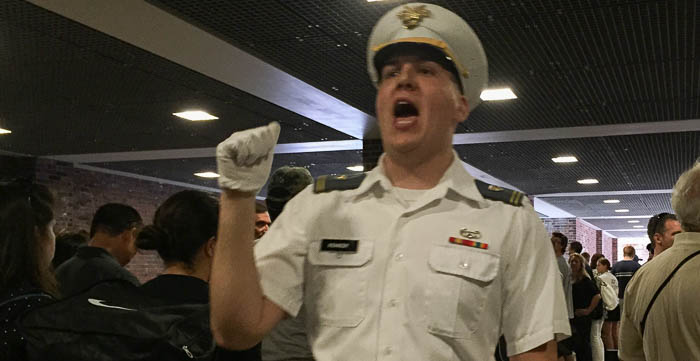 I'm paraphrasing of course, but he basically said:

I'm not gonna lie, Beast is gonna suck, but I'm a nice guy and I'll give you some advice to make it go better:

We finally walked into Ike Hall at 10:45am. They were pipelining groups of cadets, so we walked in quietly while another briefing was finishing. From watching the other talk, we knew that two people would speak, an officer and a cadet.  Once the cadet started, we'd have about a minute until the goodbye. As our briefing commenced, a Lt. Colonel took a few minutes to offer encouragement. He started with a joke saying "Don't worry, it's just like going to summer camp." Immediately, the two cadets behind him shot glances at each other, smiled, and shook their heads. Uh-uh. Not summer camp. When the cadet stepped to the podium to speak, I completely zoned out until "You have 60 seconds to say your goodbyes." The 60 seconds seems harsh, but it was long enough for a long hug from me, then Chris, and then me again. And that was it. The new cadets filed out below and we exited up and into Crest Hall. 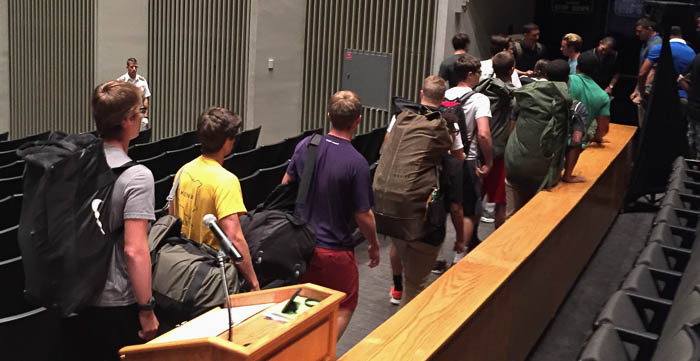 The area was lively and chock full of vendors with free giveaways, parent's club tables, and information booths. On the second floor, we filled out information with USAA to get a free "I'm a Proud Parent" tote bag along with 90% of the other parents. 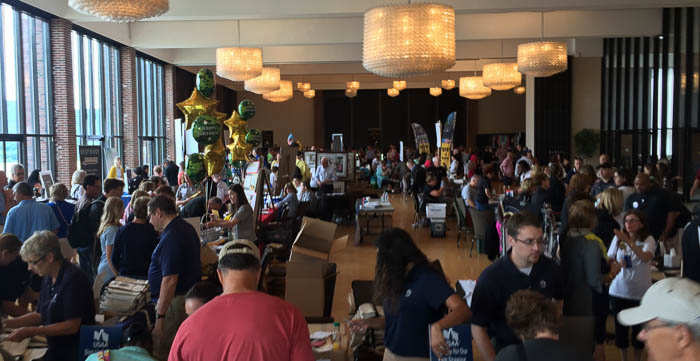 On the first floor, the U.S. Post Office had a booth with stamped envelopes for purchase. Chris wrote a quick note and handed it over; they said it would be delivered the same day! Another popular booth was staffed by the cadet counselors assigned to each Company; they handed out summer assignments (Matthew is in Company H, 3rd Platoon) and provided reassurances.

At this point it was only 11:40am and we had more than six hours to fill until the oath ceremony. There were plenty of options but we chose to start with a tour of Constitution Island. A bus delivered us to the dock where we found it would be 40 minutes until the next ferry. After the hub-bub in Ike Hall, it was peaceful to sit by the Hudson; we were content to wait. In that lull, we learned that this is the same dock where Matthew will catch a ferry to the train station across the river. 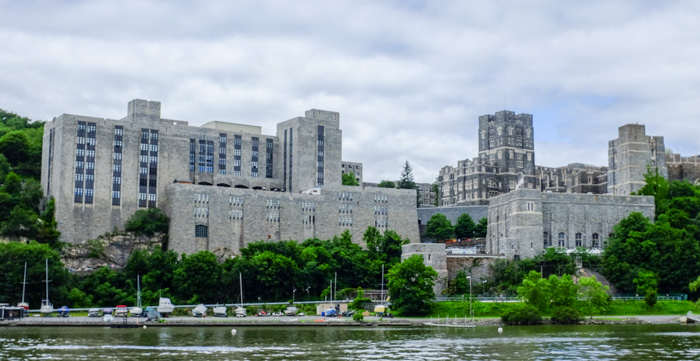 View of West Point from the ferry

It was a quick 15 minute ride to the island and we arrived at 12:45.  After a short stroll to the bleachers, the Resident Manager spoke to us for 30 minutes.  He highlighted the military significance of Constitution Island and explained how the property is currently utilized by West Point. 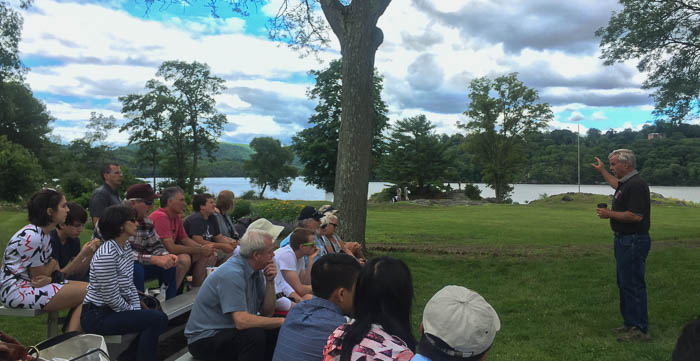 The history is fascinating; Constitution Island was key in securing the Hudson during the Revolutionary War and major players in the drama include George Washington and Benedict Arnold. Since the manager mentioned there's a hike to the highest point on the island, we had to do it! It took about 15 minutes to get to Redoubt 7 and it was worth the time; the view of West Point is magnificent. 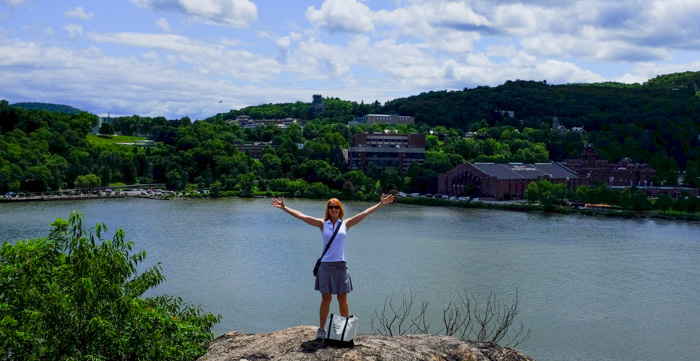 The view from Redoubt 7 on Constitution Island

Once again, good walking shoes saved the day. We were shocked to see people tackling this rough hike in sandals and heels. We caught the 2:15 ferry and made it back to Ike Hall in time for the Superintendent's talk. This presentation ran from 3:00 to 4:15 and was chock full of helpful information from the Superintendent, Dean of the Academic Board, Commandant of Cadets, Cadet Basic Training (CBT) Cadet Commander, Parent Coordinator, and Athletic Director. We learned more about West Point and what the Class of 2019 will face during CBT. They also gave a preview of A-Day and what the academic year will look like. All were well-spoken; we left feeling reassured that Matthew is in very good hands. 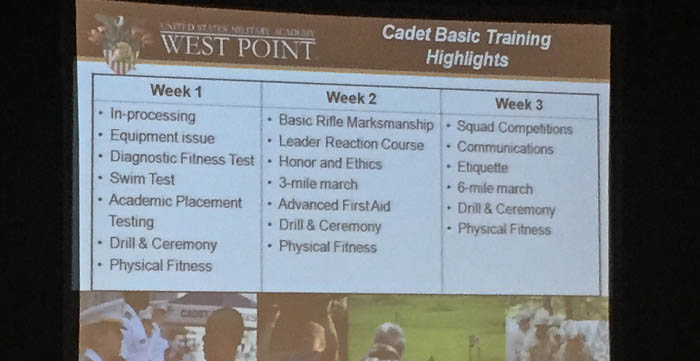 Slide showing an overview of the first 3 weeks of CBT

We were released at 4:15, so once again we had time to fill.  Our feet weren't tired yet (they would be later!) so we did the 15 minute walk up to the West Point cemetery. While wandering aimlessly over the grounds, we found the gravestones of General Custer and Sylvanus Thayer, "the father of West Point." We were also surprised and delighted to find the graves of the Warner sisters, the only civilians buried at West Point. We had just learned about them on Constitution Island so it was a nice bookend to the afternoon. 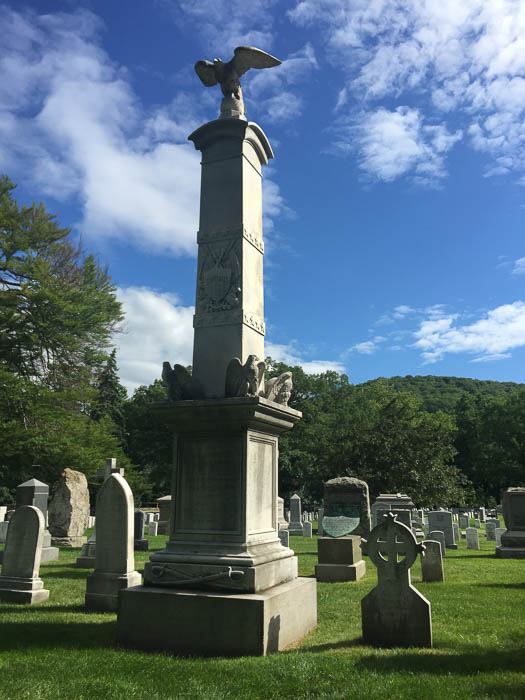 Monument at the West Point cemetery

Since we were strongly encouraged to be seated early for the oath ceremony, we were back at the plain and in the stands by 5:15. We sat and waited for over an hour, but once again, it was well worth it; everything about the ceremony was breathtaking. It was a full military parade complete with band and color guard. The band began playing at 6:20 after which an announcer gave a brief history of military drill and custom. Then as we gazed across the expansive plain, eight new cadet Companies simultaneously emerged from under the arches of Washington Hall and marched in formation to the stands. 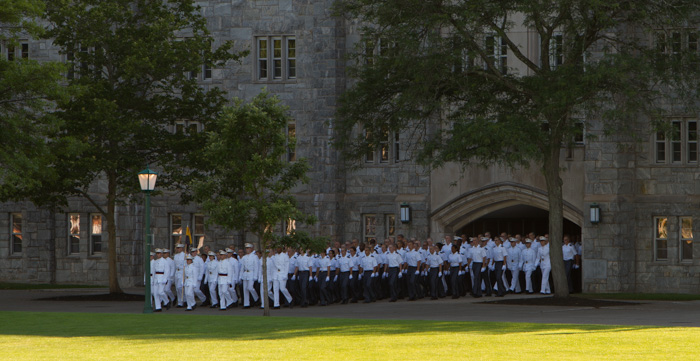 Company of new cadets entering the plain for the oath ceremony

It was a moment of shock and awe. In just a few short hours, West Point managed to transform over 1,200 young men and women. They'd come in as average looking teenagers and by day's end, they were shorn, fully uniformed, and knew how to march in formation and execute basic commands. Were they perfect? Of course not, but the scale of what was accomplished was mind-boggling. 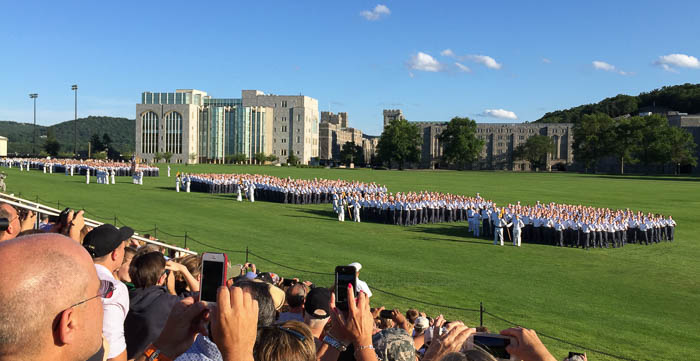 When H Company approached, Chris quickly spotted Matthew with his long lens camera. Actually, he wasn't completely sure it was Matthew until the oath when he saw Matthew speak his own name. 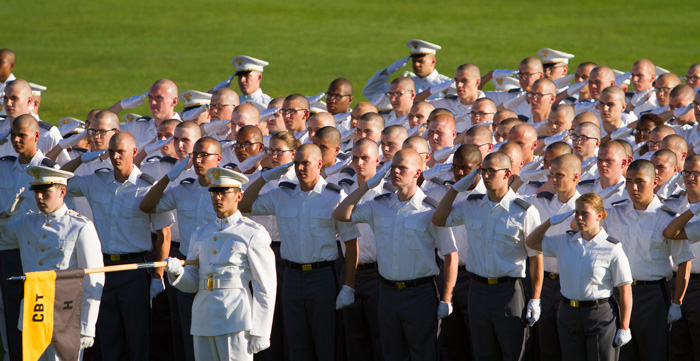 I couldn't see Matthew clearly, but what I saw almost brought me to tears. After Matthew had been practically aging before my eyes with the beard and long hair, seeing him with a shaved head was disconcerting; he looked young and vulnerable. It didn't help that he seems to be in a company of giants. Matthew is 6'4" and looked small standing in formation! 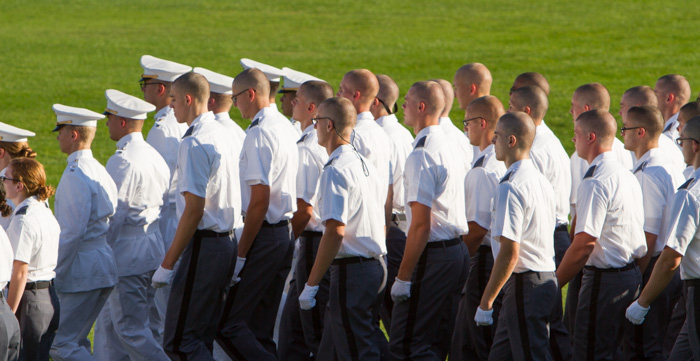 Matthew marching in H Company, 3rd Regiment. Is the entire basketball team in his Company?

While I had a moment of motherly weakness, overall it was a proud, proud time. Matthew has been laser-focused on achieving this goal and had to overcome many hurdles to get here. His dedication and commitment has been inspiring. Man I love this kid.

The new cadets turned and marched away and that was the last time we will see Matthew until Acceptance Day on August 15th. West Point drives that point home in spades. As the last Company filed up the steps and into Washington Hall, two cadets grabbed hold of the large arched wooden doors and slammed them shut so hard the crack sounded across the plain. Message received West Point; they are in your hands now.

Chris and I left the stands at 6:45 and made it back to car by 7:20. Once again we chose to walk but could have waited for a bus. 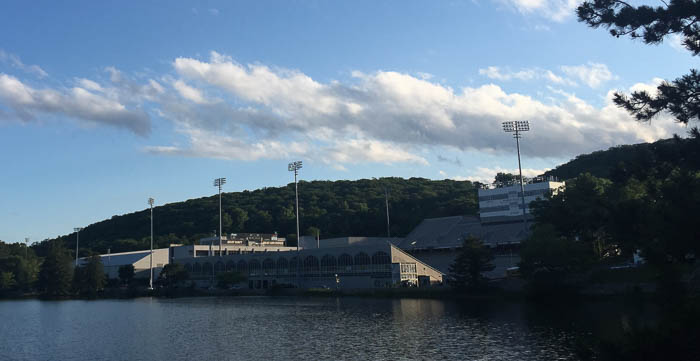 I fell into the car utterly exhausted but we still had to find dinner and drive to Albany. Ack! We ate at Shea O-Brien's in New Paltz. The place was hopping for a Monday night and a live trivia game started as we walked in. We shared fish & chips and a spinach salad and they both hit the spot. We enjoyed the experience but didn't linger and hit the road quickly. Making calls to friends and family helped to pass the time and we arrived at our hotel, The Town Place Suites Marriott in Albany, around 10:20. We had a nicely appointed suite but I could couldn't have cared less; I just needed the bed.  So tired.

Update: Matthew successfully made it through CBT and we traveled out for A-Day to see him accepted into the Corps of Cadets.