Day 3 of our 5-day New Orleans trip was our Garden District day. Okay, okay, that’s not technically true since we strayed from the Central Business District to East Carrollton, but we generally orbited the lovely Garden District area. Our day kicked off with a 9:30am tour of Mardi Gras World which wrapped up by 11 leaving 2 1/2 hours free before the Garden District walking tour - perfect! Anne suggested a little sightseeing drive and steered us along scenic St. Charles Avenue, by Audubon Park, and turned north to pick up Loyola University and Tulane. 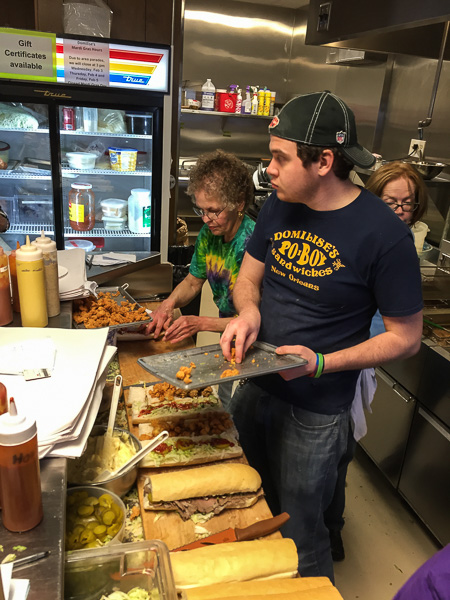 Continuing our quest to taste New Orleans’ signature dishes, we ducked into Domilise’s Po-boys and Bar for lunch. Loved this little joint! In classic deli fashion, we took a number, ordered at the counter, and waited patiently for one of the few tables to open up. The place was packed and clearly had a devoted following; it’s been owned and operated by the Domilise family since 1918. If you go, try the fries with debris and cheese. Oh. My. Goodness. What’s debris? Those little bits of meat and shavings that fall from roast beef when carving or slow roasting. Our crispy fries were covered with au-jus-drenched roast beef tidbits and topped with shredded cheddar. Yes please!

Re-energized by lunch, we parked near Lafayette Cemetery and strolled the neighborhood stopping into David Spielman’s gallery (excellent photography and conversation!) and a few cute shops in The Rink shopping center, originally built in 1884 as the Crescent City Roller Skating Rink. The Rink was a convenient spot to use the restroom and grab a coffee before our two hour walking tour.

We lucked out with clear skies and warm sun; it was a delightful day start to finish. Read on for more about Mardi Gras World and the Garden District/Lafayette Cemetery walking tour.

We purchased Mardi Gras World tickets well in advance, but I had buyer’s remorse the day before our visit. With little time and lots to see in New Orleans, would this really be worth it? It was! If you’re in town during Mardi Gras, parade-going will be doubly interesting after gaining insight into the time, money, and artistry that goes into each float. And if visiting out of season, beware - you may suddenly have a strong desire to return to New Orleans for Mardi Gras. 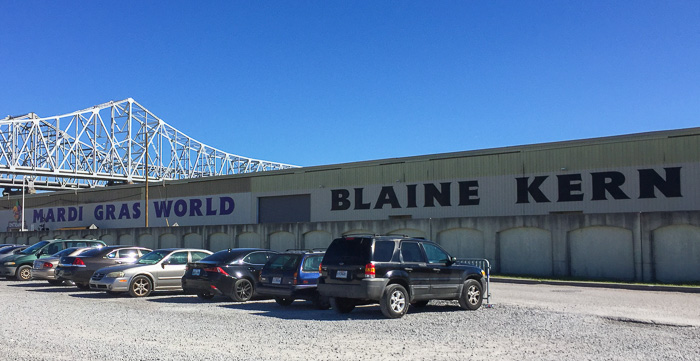 One of 17 massive warehouses owned by Kern Studios. A bland exterior masks the colorful creations inside.

Kern Studios is a design and construction facility that makes floats, sculpture and props. They’ve done work for amusement parks, casinos, and fast food restaurants (including the Chick-Fil-A cows), but when in New Orleans, it’s all about Mardi Gras floats. Blaine Kern is responsible for more than 40 Mardi Gras parades each year; hundreds of floats are stored in 17 warehouses around New Orleans along with 20,000 props and 130 tractors. 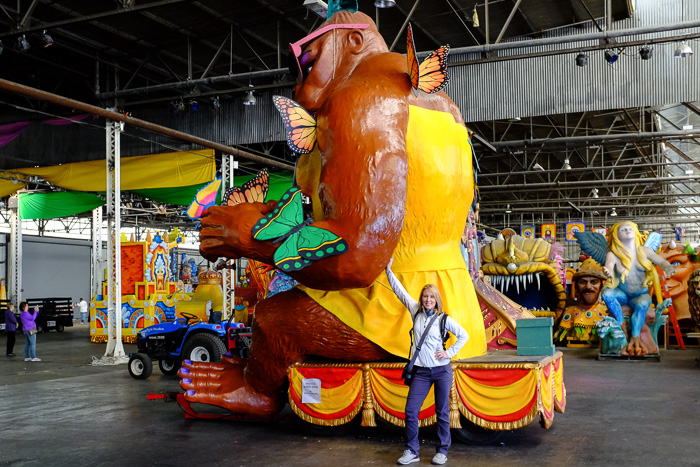 Julie with one of the Bacchus gorillas - huge!

The size and scope of float production is boggling. One float costs $60,000-$80,000 for a base structure consisting of rubber tires and a canvas-covered steel and wood frame. The krewe pays a one-time fee to own this basic float, but must also pay $6,000-$8,000 annually for decorations and props which Blaine Kern ultimately owns. This is big business considering each krewe can have 25–35 floats for one parade, and costs skyrocket when krewes compete to produce bigger, flashier floats. One float (I believe Endymion’s Pontchartain Beach Float) is 365-feet long and cost $1.3 million! 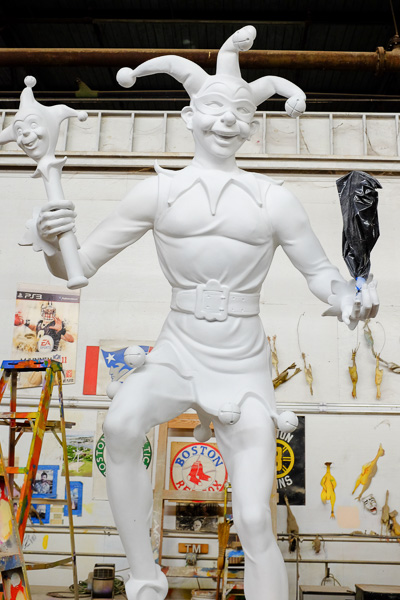 An example of Kern's fiberglass work. We saw this jester a few places around town (painted of course)!

The tour lasts for about an hour and starts with a brief movie highlighting Mardi Gras traditions and the prop design-process. After eating a small slice of King Cake (nice treat!) we moved through the warehouse to see first-hand how props are produced. The studio works in fiberglass to create sturdy sculptures, but most Mardi Gras props are made from styrofoam covered in paper mache and then painted. 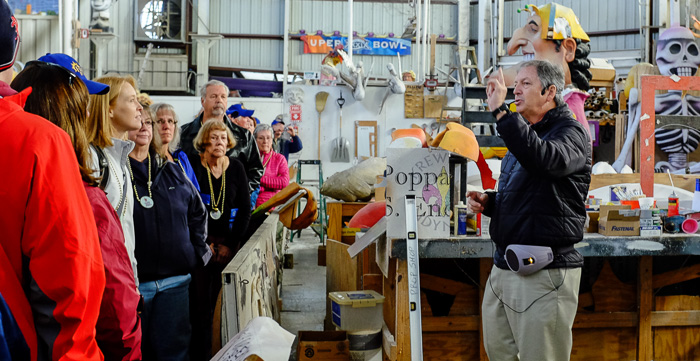 With an engaging guide, fascinating facts (most floats have portable toilets on board!), and hundreds of unique props, the tour flew by. The warehouse isn’t heated, and cooled only with large fans, so prepare accordingly. 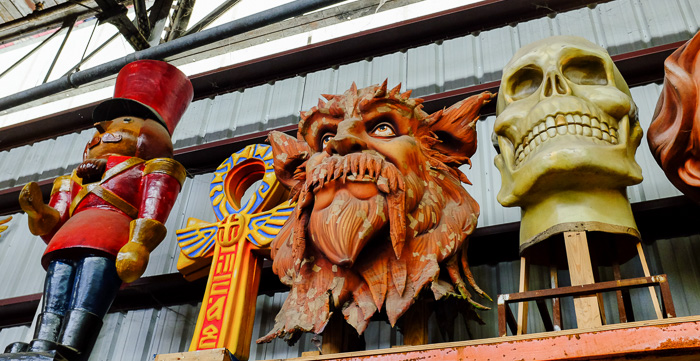 A few of the hundreds of props stacked around the warehouse.

Free Tours by Foot seemed too good to be true. They require no money up front, consistently receive high ratings on Trip Advisor, and have no set fee stating “Well, we feel that everyone should have the opportunity to enjoy a tour at a price he or she thinks the tour was worth - or what he or she could afford - so just think of our tours as ‘name your own price’.” We booked two tours with them (including the French Quarter Culinary History Tour), and couldn’t have been more pleased. Both guides were personable, knew their stuff, were entertaining and informative, and best of all, gave no hard sell at the end. Fantastic!

We met our guide Kat by the Lafayette Cemetery at 1:20 for a two hour tour. I had received a confirmation email from Kat the night before so knew exactly where to meet and what to expect. We would eventually spend 90 minutes walking the Garden District but started with 30 minutes in the cemetery learning about New Orleans’ fascinating burial practices.

If you’ve never been, New Orleans cemeteries are a sight to see, filled with elaborate above-ground vaults. It’s common to hear that bodies can’t be buried in the ground since the water table is so high, graves would fill with water and bodies float away. Kat busted that myth right off the bat. She gave multiple examples of below-ground cemeteries around town, and insisted that the New Orleans burial tombs came about because it was a Spanish custom (New Orleans was under Spanish rule in the late 1700s) and economical. The city could inter thousands in one square block saving valuable space, and families could bury generations in one vault. This article gives another reason: the Catholic church didn’t allow cremation, and burial vaults provided an acceptable alternative.

This is where it gets really interesting! Kat stopped at an open tomb and inside we could see two chambers, upper and lower, separated by a stone shelf. When a person dies, they are partially embalmed, placed in a coffin on the upper shelf of the vault, and the vault sealed with brick and mortar. Vaults can heat up to 200–300 degrees in the summer speeding up the decomposition process and acting as a natural crematorium. After a year and a day (no sooner!) the vault is opened to reveal bone and ashes. Rotten coffin wood is removed, the remains placed in a small urn, and the urn set on the lower shelf with other family members. 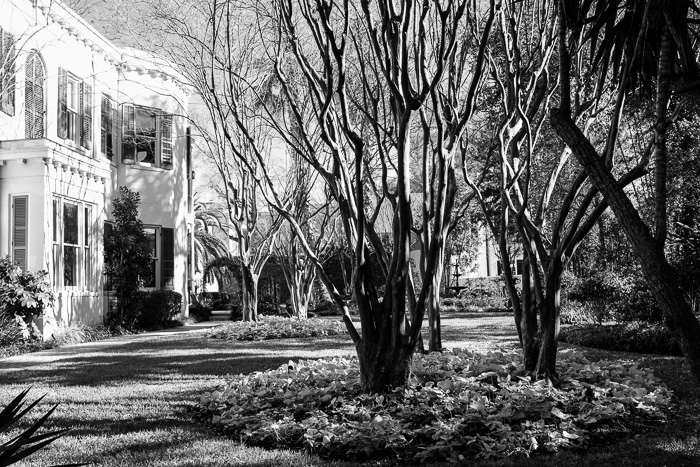 Lovely landscaping in the Garden District

After learning about wall vaults, social vaults, and a few prominent families interred in Lafayette cemmetery, we stepped out to stroll the Garden District. Way back when, the Garden District had just four homes to a block allowing plenty of space for lush gardens, hence the name. Kat started with a brief history of both New Orleans and the Garden District then moved on to the main theme of the day: the beautiful homes and the people who live (or lived) in them. As we walked, she explained both the types of homes (e.g. American townhouse, double gallery) and the styles (Greek Revival, Italianate).

At one point, Kat answered a nagging question. Prior to our visit I’d read City of Refuge by Tom Piazza, and one character had built a “shotgun house” and later added a “camelback”. I had a vague idea what those terms meant, but during the tour, Kat explained further and showed examples. A shotgun house is very simple construction in which all the doors line up, so in theory (I hope!) a bullet would travel straight through. Camelbacks were a common addition leaving the house single story in front, and then two-story in the rear. It’s an odd look, so…why exactly? Houses were taxed based on the frontage! This also explains why homes are narrow and exceedingly deep. Driving by, many Garden District homes seemed rather small, but walking revealed the truth! 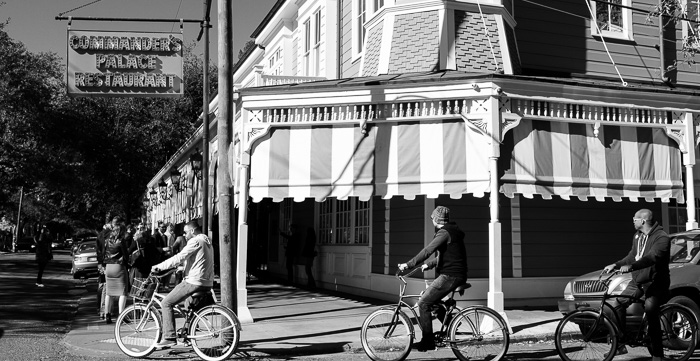 We passed homes of many famous current and past residents including Sandra Bullock, John Goodman, and Archie Manning, Ann Rice, and Nicholas Cage. Kat shared where movies had been filmed, both in the neighborhoods and Lafayette Cemetery, and highlighted Commander’s Palace. If you are able to get a reservation at this venerable establishment, be sure to dress appropriately! They have a strict dress code and regularly turn (potential) guests away.

We finished up at 3:30 on the dot, and left knowing a heck of a lot more than when we started! If you go, wear comfortable walking shoes, bring water, and take a rain jacket or umbrella just in case.

Website: freetoursbyfoot.com/new-orleans-tours/book-online/
Location: Tour meets at the southwest corner of Prytania Street and Washington Avenue
Hours: Tours at 10:30am daily except Tuesday, and 1:30pm daily except Tuesday and Wednesday.
Cost: Pay what you feel the tour is worth. Other walking tours of this type cost $20-$25 per person.
Mileage/Duration: About 1 mile of walking over 2 hours