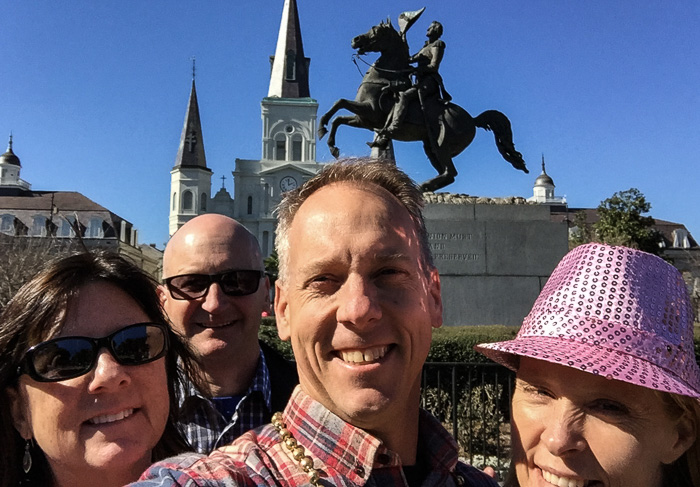 The gang in Jackson Square on our final day in New Orleans. Note my spiffy hat - Chris caught it for me in the Endymion parade!

We spent five days in New Orleans and our action-packed itinerary took us to the French Quarter three times: first an evening walk followed by dinner and jazz at Preservation Hall, next a mid-morning culinary walking tour, and lastly a brief afternoon stroll to soak in the ambiance and purchase praline before catching our flight home. You’d think that was enough, but the French Quarter will be tops on my list for a return visit to take in the atmosphere and: 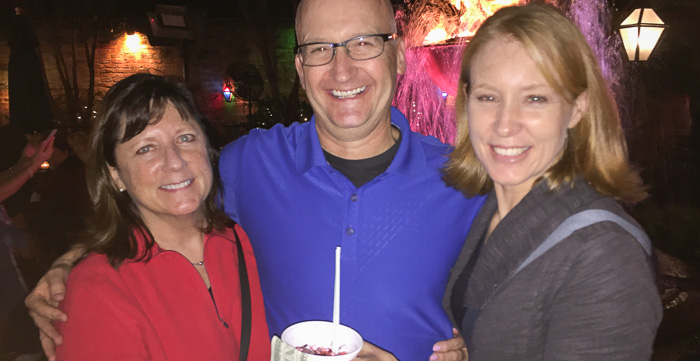 Anne, Jack and Julie sharing a Hurricane at Pat O's

I realize I’m straying from the French Quarter, but while I’m documenting my “next time” list, many also suggest strolling the popular Magazine Street for galleries, shops and restaurants.

Please don’t think I’m complaining! We had ZERO sightseeing regrets and considered ourselves very lucky to see so many parades and spend time with Anne’s wonderful family. In fact, we hit the jackpot. How many people get to sample Gay’s cooking (shrimp and crawfish étouffée, stuffed mirlitons, jambalaya…YUM!!) or get to hang out at Miss Ethel’s and play London Rummy?? 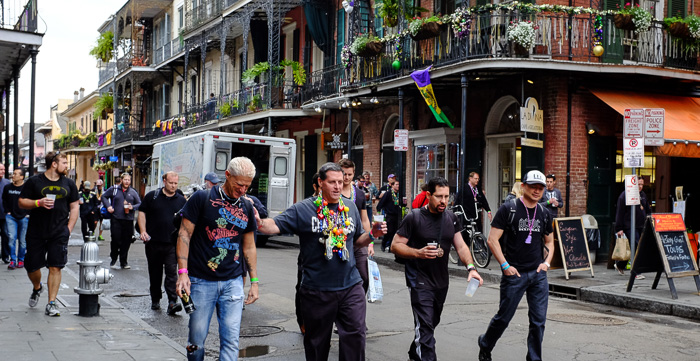 Picturesque brick buildings with wrought-iron "galleries" in the French Quarter. Balconies are held up with brackets; galleries are supported by poles or columns.

One final aside: New Orleans was under Spanish rule for about 40 years in the late 1700s and the most significant influence still seen today is in French Quarter architecture. One tour guide pointed out that when the Spanish came, settlers were still building with wood which burned often. The Spanish insisted on rebuilding with non-flammable brick, creating a French Quarter that is reminiscent of an old Spanish town. This article expands on the myriad competing French and Spanish influences in the French Quarter.

And now, two of our fabulous experiences in the French Quarter, Preservation Hall and the Culinary History Walking Tour:

According to their website, Preservation Hall hails back to 1961 when it was established to “honor one of America’s truest art forms - Traditional New Orleans jazz”. As the story goes, traditional jazz was struggling to retain its audience with the rise of rock and roll and bebop in the 1950s. Around that time, Larry Borenstein opened an art gallery in New Orleans and found himself too busy to get out and listen to his beloved but dwindling jazz scene. To solve his music crisis, Larry invited local musicians to rehearse in his gallery. Jam sessions grew in size, started to attract living legends, and became so popular Larry moved his gallery to the building next door. Regular performances took hold and Preservation Hall was born when Larry passed day-to-day music operations over to Allan Jaffe, an ardent fan of New Orleans jazz. 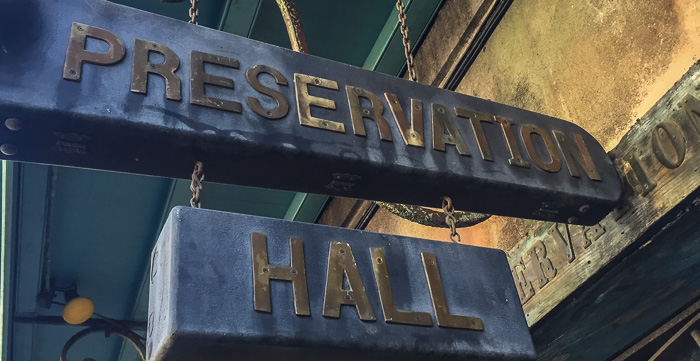 Preservation Hall is still considered to be the place to find traditional New Orleans jazz and I loved experiencing a classic jazz set in such an intimate setting. It was a extra-special treat to have Shannon Powell “The King of Treme” sit in (!), and to hear outstanding solos from Mark Braud on trumpet in Sugar Blues and David Harris on trombone in Mood Indigo. Robin Barnes “The Songbird of New Orleans” treated us to It’s a Wonderful World, and the band played a killer rendition of Little Liza Jane.

It was a superlative jazz experience but the environment leaves many dissatisfied. Expect the space to be crowded and warm. No food or beverages are sold inside, but you’re free to bring a drink in. Seating is very limited so unless you pay the big bucks for a reserved spot, plan to stand for 60 minutes to hear a 45-minute set; we got lucky and were first in line for the 10pm show which ensured we’d get seats. The only negative for us: we sat on the right (as you are facing the stage) and during quiet numbers, we could hear music from Pat O’Brien’s next door. It was distracting, but probably only heard by those sitting directly against that wall.

I loved this tour from Free Tours by Foot! Our guide, David Westbrook, was warm, funny, knowledgeable, and engaging. I can’t imagine a better introduction to New Orleans and I highly recommend this tour at the start of a visit. David gave a concise history of the city, how its early settlers influenced the cuisine, and shared interesting asides about New Orleans culture. I was impressed before we met given the detailed confirmation email I received the night before, but David went above and beyond by sending a follow-up email listing the many restaurants he’d recommended during the tour. 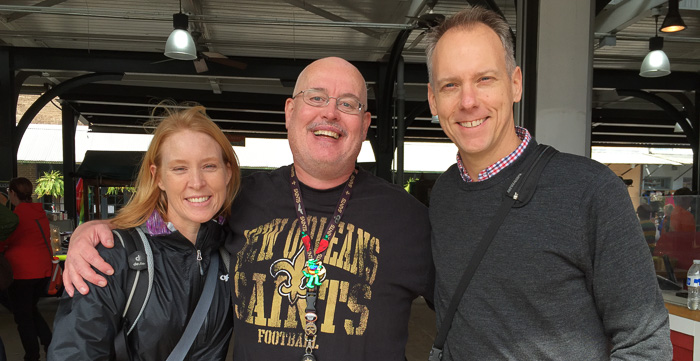 David was hard to resist, starting and ending the tour with a heartfelt thank you, and insisting that we were now locals and not “tourist-es”. He also had us laughing out loud with colorful descriptions like: sucking the meat out of a crawfish is a “silky smooth spicy slurp of cajun ecstasy” and blackened foods are not burned but rather a “sexy spicy hunk of seasoned meat”.

I think David’s love for the city (and its food!) set him apart. He likened giving tours of New Orleans to introducing his fiancé to his family - she may be rough around the edges and have a checkered past, but he loves her and wants his family to love her too. 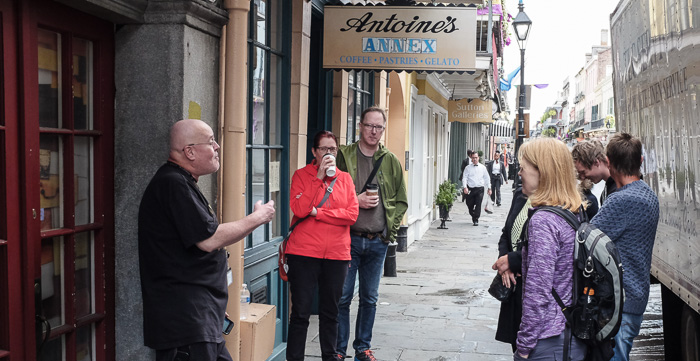 David made it clear that to understand New Orleans, you have to understand its settlers. Here’s a super-brief and hopefully accurate early history. Note that David didn’t go into this much detail; this is an amalgamation of information from our various tour guides:

So New Orleans was founded and settled by the French, then ruled by Spain for over 40 years. It’s also important to note the arrival of “les Acadians” (aka Cajuns) in the early 1700s who were French colonists from the Acadia region of Canada, forcibly relocated by the British. Cajuns settled multiple areas including the coastal marshes of New Orleans. 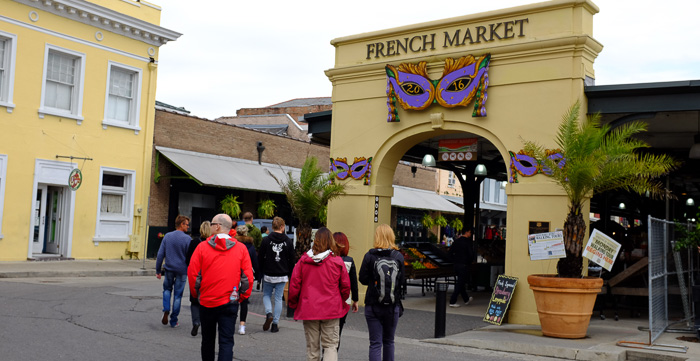 Our walking group heading towards the French Market

David explained that the terms “Creole” and “Cajun” refer to both a people and a type of cuisine. The Cajun are straightforward, defined as the displaced Acadians living in rural Louisiana. They’re country folk. Creole is more difficult to nail down but generally “French Creole” describes descendants of Spanish and French colonists and “Louisiana Creole” describes someone of mixed racial ancestry including native born-slaves and free people of color. Whoever their ancestors, Creole are generally city folk.

This country vs. city split is the easiest way to remember the difference between Cajun and Creole food. At its simplest, if a dish has tomatoes, it is Creole. Going deeper, the Creole had access to a wider array of ingredients and more time to prepare foods leading to exotic seafood dishes and complex creamy sauces like remoulade.

Cajuns by contrast, had to make do with little. As David recounted, they wanted their food to taste as good as Creole so they compensated with spices. You can also spot Cajun food by the meat used since “When a Cajun goes out to hunt, they look for something that fights back” - think alligator, venison, pork, duck, or lamb. Both Creole and Cajun dishes often start with “the holy trinity” of onion, celery and bell pepper and add “the Pope” (garlic) for good measure. 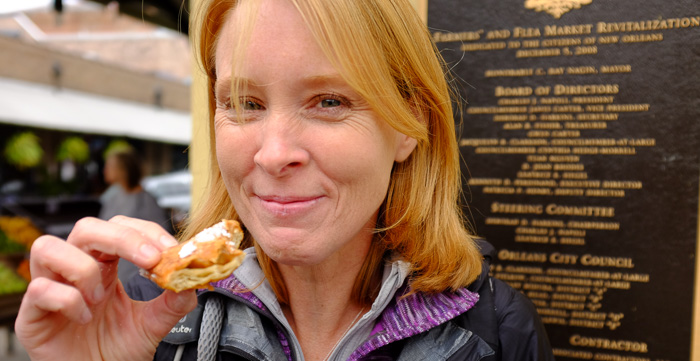 Julie showing off her praline-stuffed beignet from a stand in the French Market. Total sugar bomb!

David gave in-depth descriptions and histories of jambalaya, gumbo, muffaletta, po-boy, beignet and praline (pronounced praw-lean in these parts) making us seriously hungry by the end. He also offered a few pieces of advice: 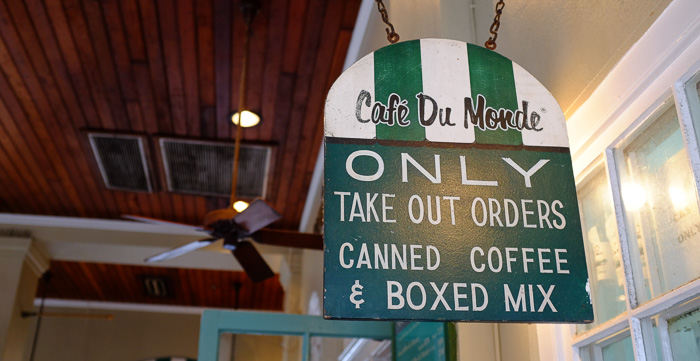 Many say that Cafe Du Monde is THE place to get a beignet, but you don't have to do take-out. David encouraged us to go in and grab a table, but don't linger since the place is always hopping!

I’ll give a few more of David’s restaurant recommendations (just as he emailed them) but to get more, take his tour and hear it first-hand! These are but seven of over one hundred restaurants he listed:

Final piece of advice (from me, not David): save the dieting for before or after your New Orleans trip, not during!

Website: freetoursbyfoot.com
Location: Tour meets at Antoine’s Restaurant, 713 St Louis St, New Orleans, LA 70130
Hours: Tour at 10am daily
Cost: Pay what you feel the tour is worth. Other walking tours of this type cost $20-$25 per person.
Mileage/Duration: About 1 mile of walking over 2.5 hours