Hooo-eee. I may approach some tasks half-heartedly but I OWN cheat day. Truly. If you could see the food I put away in 16 waking hours…Chris just laughs and shakes his head, incredulous at my gleeful consumption. More later about what cheat day is and why I do it. For now, let’s dive into the goodies we sampled in and around Penn Yan. What a day. 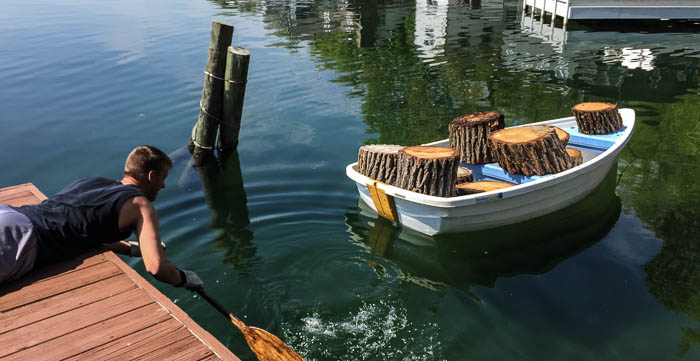 We took down two trees and the boys alternately floated, rolled, carried and wheeled the logs across our property. The rowboat method was my favorite by far!

Matthew and his best friend James have been with us at Keuka for about a week and they’ve been hard at work moving logs and bagging leaves. They definitely earned their stay and it was high time for treats. Since James would be departing just one day before his birthday, we proclaimed the day to be his un-birthday as well. So many reasons to indulge! 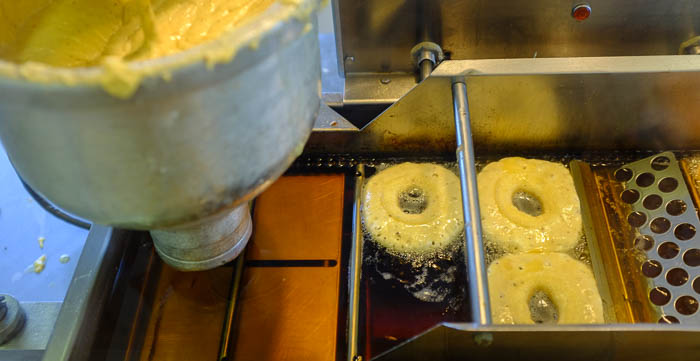 Donuts in the fryer at Andy's BBQ

We started strong with made-to-order donuts from Andy’s BBQ Shack (at 2447 State Route 54A in Penn Yan). It’s an unlikely place to find donuts to be sure, but if you’re a fan of cake donuts, stop in. The icing and topping choices were limited but more than enough for our crew; we stuck with plain glazed and cinnamon sugar. Our order took about 10 minutes to whip up, but the wait was worth it. I’ve never experienced freshly prepared donuts still hot from the fryer. Simple and delicious. 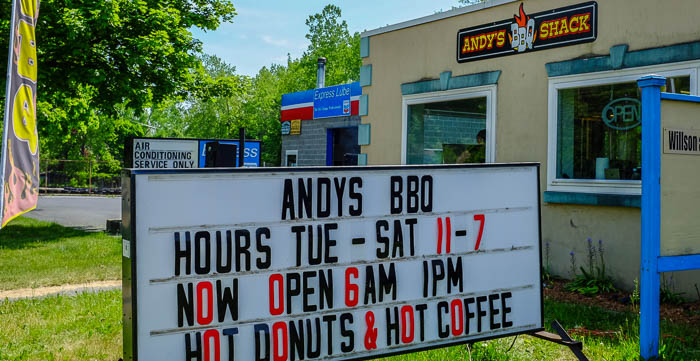 The hours at Andy's BBQ Shack.

Donuts are are $1.00 each or a dozen for $10.00. The business seems to be family-run and folks were welcoming. The only slight negative: It was an unseasonably hot day and the shack was uncomfortably warm and smoky. That’s upstate New York for you, though. We’re kind of stuck with feeling hot and sticky. 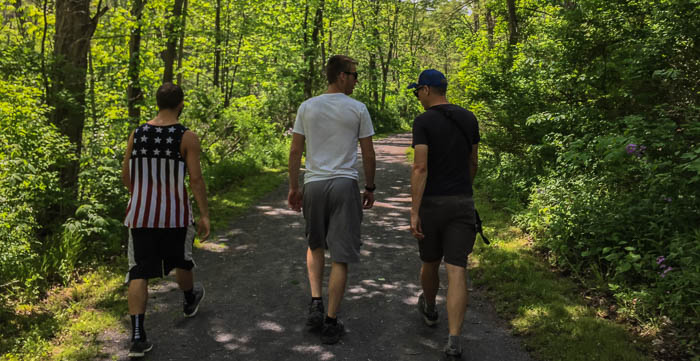 The guys walking towards the waterfall on the Keuka Outlet Trail

To space out our sugar bombs, we scheduled a quick hike to the big waterfall along the Keuka Outlet Trail. If you’ve never been, the Outlet Trail runs for 7 miles from Penn Yan to Seneca Lake. Some hike or bike the whole length, but there are a few parking areas along the way allowing shorter jaunts. We parked a 1/4-mile from the waterfall, but in retrospect we should have parked further away. I neglected to tell you we had a layer of pancakes and sausage in us before we even set out for Andy’s donuts; it would have felt good to hike a bit more! 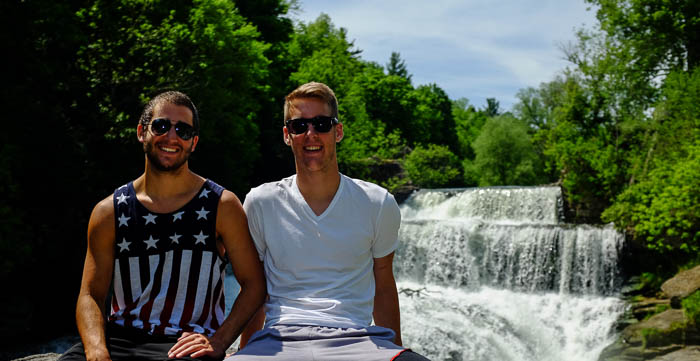 James and Matthew at the Keuka Outlet Trail waterfall.

The waterfall is impressive, and its cool mist a welcome refresher. This would be a lovely spot for a picnic given the peaceful river, rushing waterfall, and covered shelter. If you go, pack bug spray. This particular spot on the Outlet Trail doesn’t seem to have much standing water, but I’m gun-shy after we cut a previous hike short (near Dresden) due to full-scale mosquito attack. 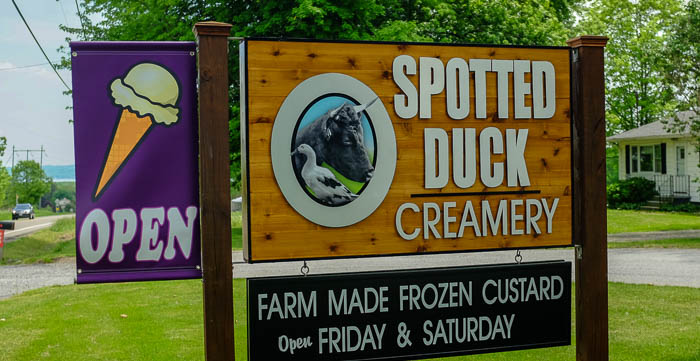 Next stop: Frozen custard from the Spotted Duck Creamery (at 999 St Rt 54 outside Penn Yan). I heard about Spotted Duck last summer but never made it out and put them on my list for this year. I thought I was losing my marbles when planning our day; I could have sworn the creamery was in Branchport but Chris insisted they were out of Penn Yan. Turns out we were both right - they just moved to their new location. 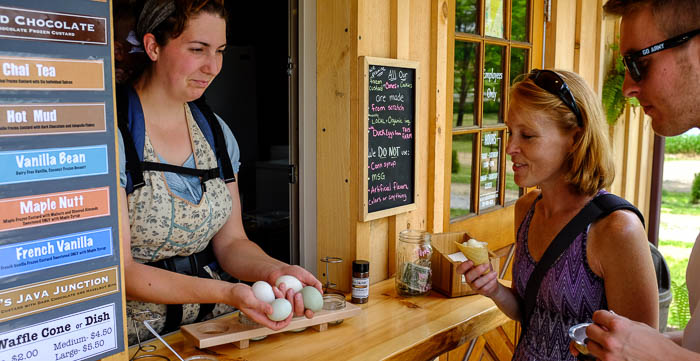 The owners, Daniel and Elizabeth Hoover, love their new spot and I can see why. It’s a peaceful, open area with lovely landscaping and plenty of parking. The creamery is most definitely a family affair and we enjoyed chatting with Daniel and Elizabeth. They were generous with their time and patiently answered my duck questions (no they aren’t quite as productive as chickens but their eggs are richer and have more more protein), showed us a few pastel-colored eggs, and welcomed us to walk around back to see their flock of Anconas. 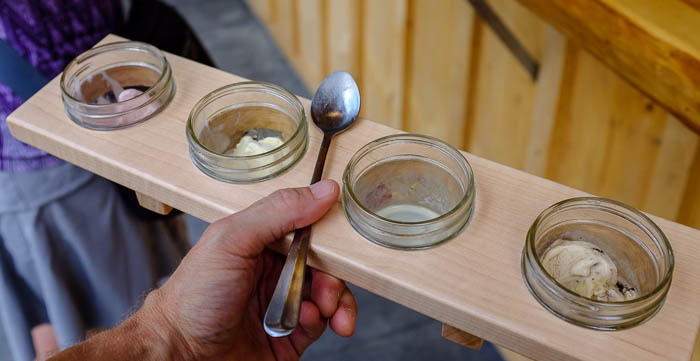 Oh - and the custard was scrumptious. Most ingredients are locally sourced with many grown and raised right on their farm. Chris went for a flight of four different flavors (how great is that?!) and was partial to the Strawberry Rhubarb as were the boys. I indulged in a waffle cone with Vanilla Creme (loved it) and am already looking forward to our next trip out when I’ll likely dig into the Serendipity Sundae: "Strawberry Rhubarb frozen custard with local, organic blueberries, strawberry chardonnay wine sauce and our signature whipped cream". Yum. 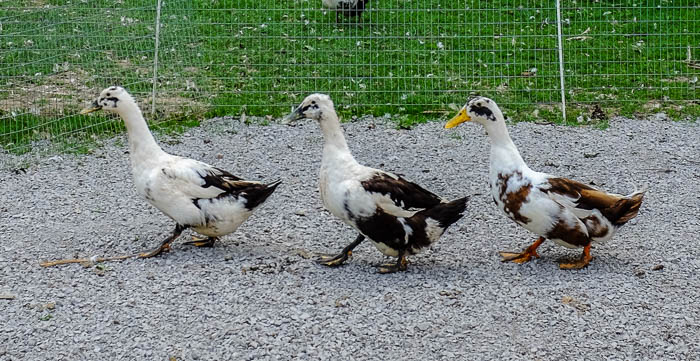 Spotted Duck Creamery is currently only open on Friday and Saturday, 11am–8pm, but hope to expand their hours soon. 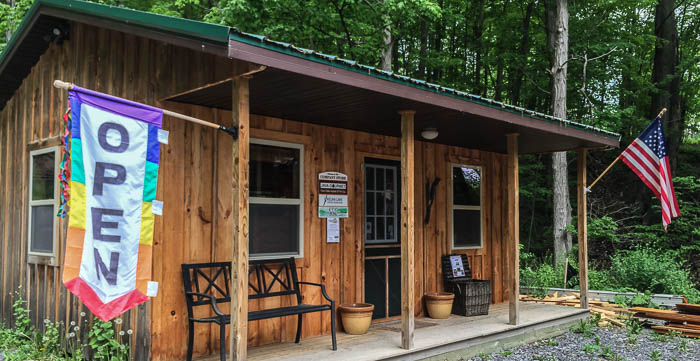 Keuka Coffee Roasters / Java-Gourmet. This small building is set behind the new building under construction.

Since it’s a well-known fact that frozen custard brings out the subtle undertones in craft beer (?), we set course for Abandon Brewing (2994 Merritt Hill Rd, Penn Yan). At the Hoover’s suggestion, we swung into Keuka Lake Coffee Roasters (aka Java Gourmet) on the way. We expected the fresh roasted coffee, but were surprised to find Seneca Lake sea salt and a range of coffee-based rubs, shakes and sprinkles.  Call before you go (315–536–7843) since they’re under construction and have limited hours. Their address is 2792 NY–54A in Penn Yan. Slow down when you get close; they’re easy to blow right by. 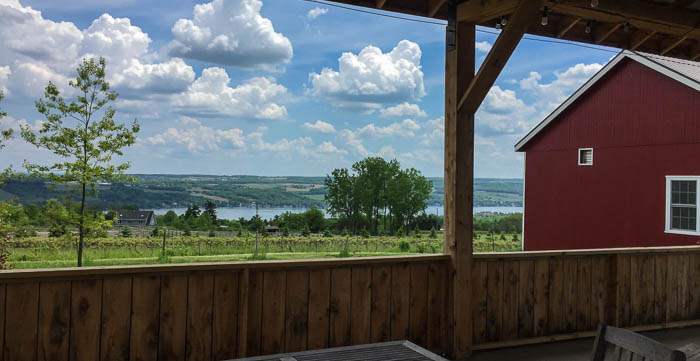 The view of Keuka from Abandon's covered patio

Within five minutes, we walked into Abandon Brewing.   We stopped into Abandon last year for their Father’s Day event and Chris has been wanting to get back to try their insane Woodshed line. With six in the 8–10% alcohol range, these beers are not to be trifled with. Of the three Chris sampled, he liked Devil’s Bluff the most (a Belgian Golden Strong); I stuck to the Flagship line and enjoyed a Sessions Saison. 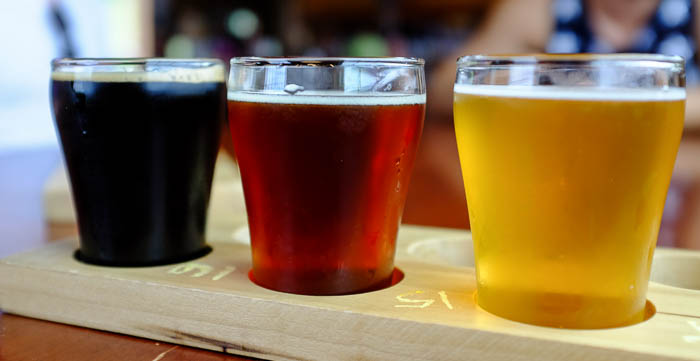 It’s awfully nice to have designated drivers along. Leaving Abandon, James and Matthew took over both the driving and the radio - quite a change! When Chris and I commandeered the front seats we rolled with Springsteen, but when the boys were in charge, Logic’s “The Incredible True Story” carried us home. Nice of the youth to keep us old fogeys up to date. 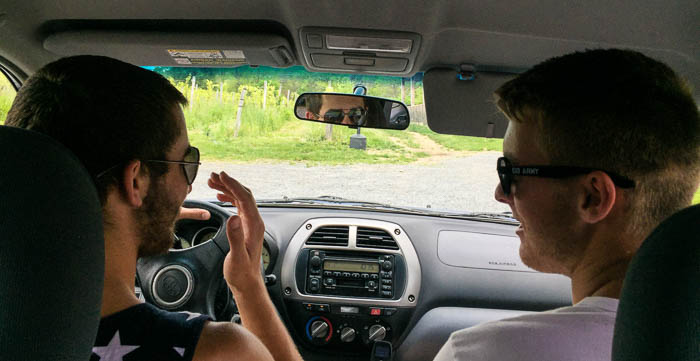 James and Matthew take over

Little did the boys know we had one final stop at Seneca Farms (at 2485 NY–54A in Penn Yan) to pick up a pre-ordered ice cream cake for James’s un-birthday. We dug in after dinner and while everyone raved over the Cookies & Cream and Chocolate Chip Cookie Dough, I was fond of their fluffy icing. Unless Matthew says otherwise, he’s getting a Seneca Farms cake for his birthday in July! 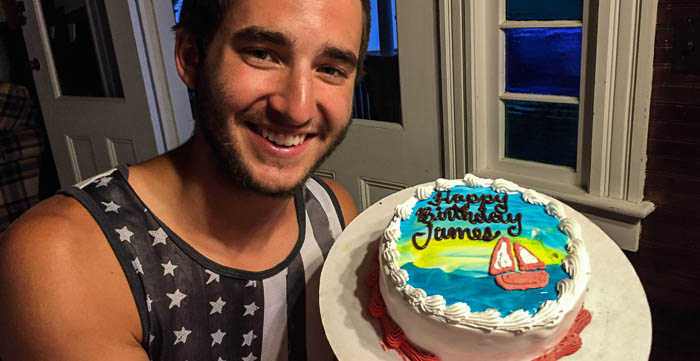 James with his un-birthday cake from Seneca Farms

It was a decadent outing and I’m glad Chris and I went for a quick run to start the day. As for the boys, they burned through a few of the extra calories with a fierce session of battle-tubing.

To wrap up, I’ll loop back to “cheat day”. Chris and I have made a concerted effort in the last few months to clean up our diet. We started eating Paleo in February and then transitioned to Slow Carb in March (from Tim Ferriss and The 4-Hour Body). I love this eating plan - it’s the first time in my life I don’t have to work to maintain a stable weight; it just happens. Very simply, I eat lean protein, vegetables, beans, nuts, and seeds 6 days a week, and on the 7th day I feast.  Full disclosure: I'm trying to maintain weight (not lose) so often have a couple pieces of fruit and one light beer each day, both non-allowed items.

Why a feast day? To boost metabolism and ward off the “starvation response” where the body grabs onto fat and calories and hoards them. No thanks! And so I eat. Because of cheat day, my diet may not seem very healthy, but I assure you, the treats I gorge on that one day are a fraction of the sugar, simple carbs, and alcohol I used to consume on a weekly basis so I’m relatively much healthier. Some disagree with the concept and merits of cheat day, and it certainly won’t work for everyone, but it keeps me going and I’ve never felt better overall. To each his own. 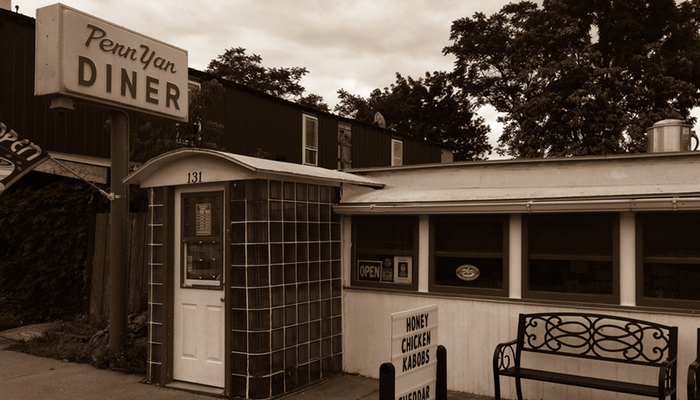 We didn't make it in today, but we've enjoyed breakfast at the Penn Yan Diner

Honestly, I would have enjoyed exploring Penn Yan even on a non-cheat day; it’s a quaint town with one-of-a-kind shops and restaurants. We’ll be back!