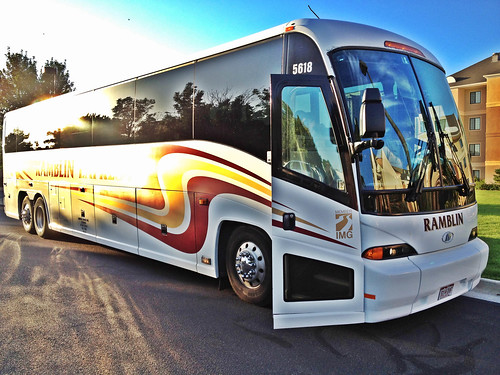 On July 24, crews 724-G arrived at Philmont base camp headquarters at about 10:50am. The Ramblin Express bus had picked us up at the hotel at about 6:45am and we drove straight through, aided by the larger-than-expected bus with a built-in bathroom. 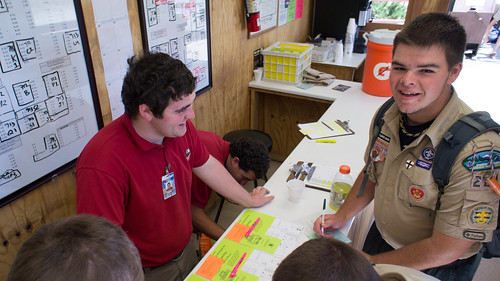 Upon arrival our three crew leaders and three advisors (remember, we have a troop contingent of 25 people split into three crews) went to the welcome center and checked in. The staff was very friendly and efficient, immediately handing over our welcome packets and assigning us to a group of tents in the outbound tent city. In the packet was a fairly long checklist of areas to visit for the crew leader.

Meanwhile, the other scouts and adults formed several pack lines and unloaded the bus. By the time we came out of the welcome center, everyone was unloaded and ready to head to the tents.

The tent city at Philmont is vast, sitting on a flat plain with the Philmont peaks rising to the west. Think of the numbers here – there might be 20-25 crews starting and finishing their treks on a given day, spending one night in tent city. I suspect they need to handle about 600 – 1000 campers at a time. This is just for the Philmont treks, not considering the separate Philmont Training Center which I’m sure can handle several hundred more in their tents. Those tents are larger and have electrical outlets. 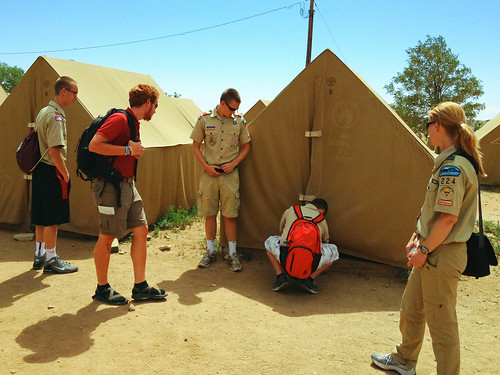 Our tents were the standard scout canvas wall tent with a solid raised floor. They were more than adequate for the one night we would be spending. Julie and I shared a common bag for our travel items that we wouldn’t be taking on the trail, and we tried to keep everything in our backpacks (that we checked on the airplane) that we would be taking on the trip. Note that we carried on our lighters and matches, but made sure we checked our pocket knives in the backpack. Strange rules. As I mentioned before, we didn’t carry any fuel with us and purchased our isobutane canisters at REI in Denver. 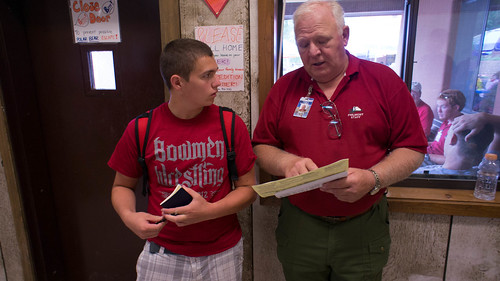 Our crew leader Derek led the way for the rest of the day with me tagging along. After doing a medical recheck (reviewing health forms and taking blood pressure readings) Derek and I went to the logistics area to review our itinerary. Our logistics advisor Steve was extremely helpful. He pulled out a framed version of Itinerary 34 on the Philmont overall map and had Derek pull out his map. Steve supplied some Sharpie markers and we proceeded to walk through the entire trek and mark where we would camp, have programs, resupply, and find water. We checked the all-important “water board” at this time to ensure that sites that were supposed to have water really did. We were fortunate to not have any dry camps.

Steve also gave us a few other valuable tips: 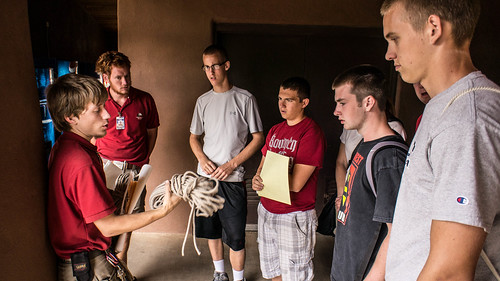 The rest of the day was spent getting crew equipment, bear ropes, and some final training from Nathan, our personal ranger. Choice dialog during our training about mountain lion awareness:

Matthew: “If we kill a mountain lion can we eat it?”
Nathan: “Uh…sure…yes. If you kill it you can eat it.”
Kyle: “Challenge accepted.”

This is where we started to encounter some philosophical differences with the Philmont staff regarding cooking. For quite a while Julie and I have subscribed to the freezer bag method of food rehydration, and we spent some time optimizing the process during our many training hikes. The hot meals at Philmont (usally just dinner, but also some breakfasts) involve rehydrating dried meals with boiling / hot water. Julie even fashioned two DIY freezer bag cozies to optimize the rehydration process. We didn’t question our approach throughout the training hikes, and we had even spent time researching what past crews had done and felt like this was a safe approach (search for “Philmont turkey bag” to learn more).

As you can see from this thread on the Backpacking Light forums, this has become a hot topic this year. Our ranger was adamant that there would be no turkey bag cooking for our crew (or freezer bag cooking) and that we would be required to cook from a single common pot. The reason for this change in philosophy is the increase in waste that results from crews using freezer bags then disposing them at trash pickup sites.

While I support this reasoning and applaud Philmont’s approach to minimizing impact and waste, I was very disappointed that this guidance wasn’t made clear during the planning process. We tried every angle on this — what if we carried out all of the bags we used? The staff was adamant, even after we escalated to a higher level ranger.

So… I was adorned with the “pot of shame” and we initiated our adventure with crew-based cooking in a single pot. I will say that as soon as our ranger departed we reverted to our orginally planned method of cooking, and we carried out (and off the Philmont property) every bag we cooked with in this fashion. 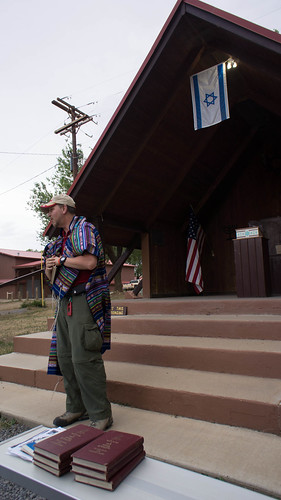 On our arrival night we had a number of optional chapel services to choose from. Several of us decided to attend the Jewish service and greatly enjoyed it. The chaplain was engaging and understanding that many in his audience were not Jewish and as a result took the time to explain the various rituals and prayers. There were some congregational responses that we were not allowed to do, however, because of our lack of a Minyan. 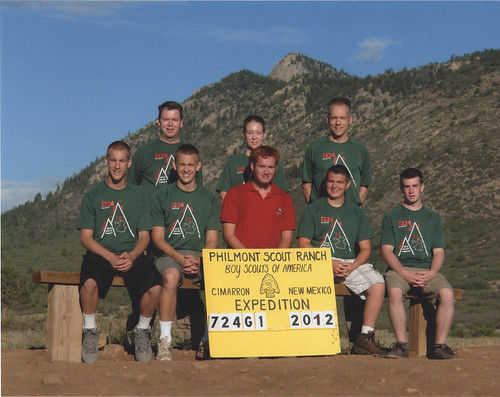 Our bus wouldn’t depart base camp until 1pm the next day, so we had plenty of time in the morning for our gear shakedown, final purchasing at the Tooth of Time Traders, and crew photo. In my next post I’ll describe our day 1 adventures.