This post summarizes the seventh of eight days I spent backpacking through Shenandoah National Park on the Appalachian Trail.  Click here for my Trip Summary to find articles, maps, and details around trip prep, packing, and lessons learned.

Since we’re one day away from completing our epic adventure, perhaps it’s time for some trail wisdom? Our day started in the usual way, talking with hut-mates while cooking and packing up. John and Nick were pretty hard core with their oatmeal, preferring to eat it straight out of the bag (dry and uncooked) with a water chaser. Blleeagh. I don’t know if they were trying to be efficient or just didn’t like to do dishes, but…blleeagh. Since my Jetboil was out, I offered to boil water for them. Both guys initially demurred, but on my second or maybe third offer (“Seriously guys, I have plenty of fuel, it’s nothing”), Nick accepted. 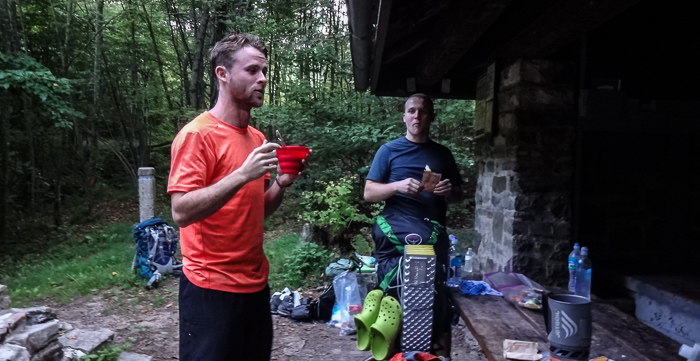 Nick and John eating breakfast at Blackrock Hut. Note that John (in the blue shirt) is eating dry oatmeal straight from the packet. Ick!

When hiking later, Lynn brought up that scene and commented “Nick said YES.” Captain Obvious? Not exactly. She was referring to a conversation I’d relayed from my time hiking the Dingle Way in Ireland. About halfway through that 8-day hike, I awoke at 3:30am and stumbled to our hostel kitchen to make coffee and write in my journal. Much to my surprise, another hiker (originally from Malta) was already awake, intending to do the same. We talked for a solid 30 minutes, and one tidbit struck a chord. He said Do you know the problem with young people? When a stranger offers a kindness, they say “No” feeling they can’t possibly repay the gesture…that there’s an imbalance. If an offer is made, accept that it is freely given. Say “Yes, thank you” and you will both benefit. If you feel a debt, offer a kindness of your own someday. Pay it forward.

It resonated because I have that very problem; “Oh, no thank you” is my first instinct every time. Since that enlightening morning, I’ve made a concerted effort to accept the kindnesses that come my way. I think the world is a nicer place when we both help and accept help, give and receive. I was happy Nick said yes to me, and I said yes to to Dave the night before when he offered up his DEET lotion. Such small gestures each one, but not inconsequential. 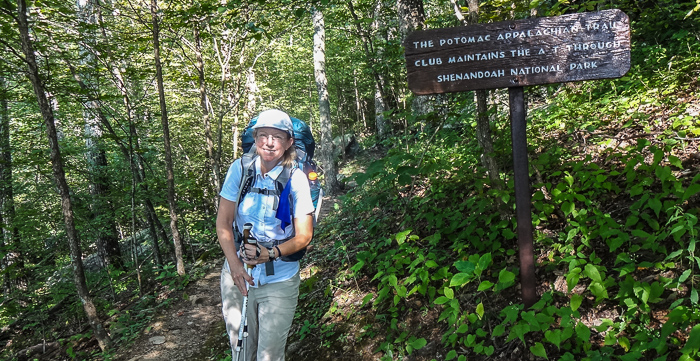 Shout out to the PATC: Thank you for all of your hard work maintaining trails and huts!

Alrighty, back to brass tacks. We took off at 8:35am just after being mildly chastised by Boris and Natasha for washing our clothes in powdered detergent at Big Meadows (they’re very into their technical gear, lol). My socks were still damp from the night before, but they dried quickly once the blood got pumping. Aside from noting that the forest had generally taken on a delightfully “pine-ier” smell, our morning held no further revelations or grand views. 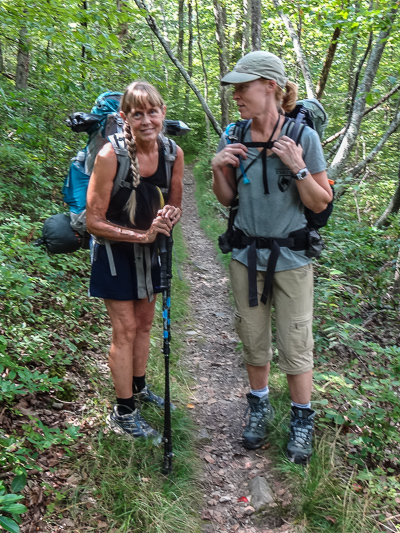 Things started to pick up once we met Kool Aid (aka Kim Starr) from Ohio, a 61-year-old woman with six kids who decided to thru-hike the AT with no previous outdoor experience. WOW. She started on April 11th (I think), carried a 45-pound pack, and lost over 35 pounds on the trail. Given her pace, Kim knew she wouldn’t finish this year, but adamantly referred to herself as a thru-hiker. Technically, hikers have one calendar year to complete the 2,100+ miles, so until April 10th, she’s a thru-hiker; after that, she’s a section-hiker. Love it! Kim certainly sounded the voice of experience, peppering the conversation with familiar AT-isms, and tossing out one we’d never heard: Apparently “grey blazers” are hikers who have passed before you and knocked down all the cobwebs. Grey-Blazers, Spider-Men…whatever you call them, we’re eternally grateful for their service.

At the Turk Gap parking lot, Lynn struck up a conversation with a family of four who’d just moved to the area from Ketchican, AK. Before I could say Jack Robinson, she’d sweet-talked them into taking all of her trash! Lynn, you slay me. 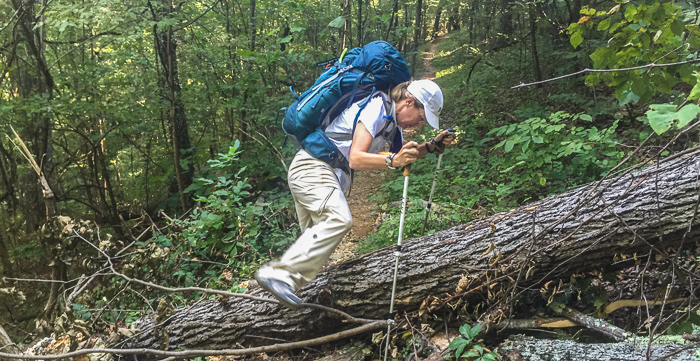 Lynn climbing over downed trees on the AT, just prior to running into a big group of college students on a pre-orientation camping trip.

And then came the group from a-nearby-college-that-shall-not-be-named. My goodness, we talked about them for hours. Long story short:

Why were they in this pickle? Best guess: They were supposed to camp at Calf Mountain but decided to press on without good intel about what lie ahead. We talked to them at length and Lynn gave one leader a full set of our maps, mileage, campsite, and water info. Another hiker passed them an hour later and they were in the same spot, so despite our best efforts to lure them back with intense mind-messages, they might have hunkered down and camped right there. Uncomfortable, but hey, they’d survive. Overall, it was an upbeat crowd with varied intended majors (Economics, Computer Science, Creative Writing) and one young lady who aspired to join the FBI. 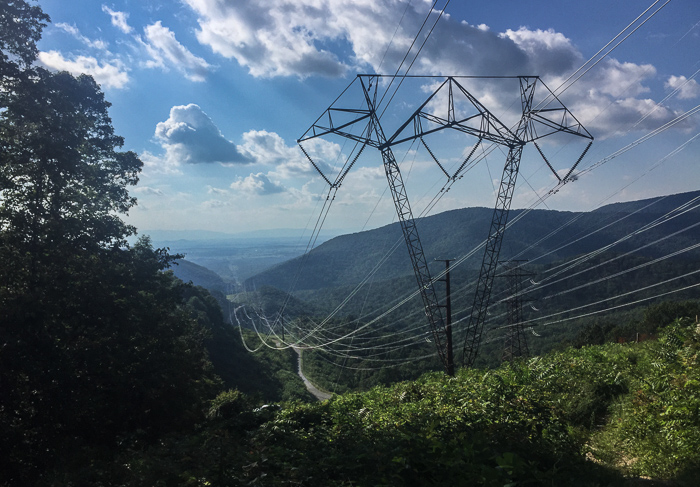 Sizzling power lines on the way to Calf Mountain Shelter.

We scampered under the power lines as fast as little rabbits (that “sizzle” was unsettling!) and then oh boy oh boy oh boy. The last mile to the Calf Mountain Shelter was a doozy. Here’s my recording, punctuated with huffing and puffing: “Let me tell you what. That is some STEEP business. Sheesh. Very steep switchbacks uphill. Rocky as all get out. Slow going. Holy Hannah.” I’d love to go back and hike that section again someday to see if it’s really that tough. Maybe it was the heat (sweltering), pre-conceived notions (only a mile left), or cumulative grind (Day 7 of 8 averaging over 14 miles/day), but for whatever reason, it kicked our butts. 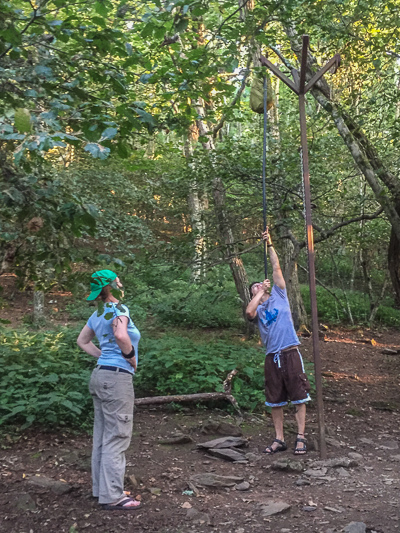 Avalon and Tim hanging bear bags for the first time

The shelter was 0.3 miles from the turn-off, with a spring along the way. We stopped to fill up, and rolled into camp at 5:40pm. Avalon and Tim were hanging out at the picnic table, and we quickly learned that they too (like the college group) had no mileage or water source info. People sure do like to wing it! I left my copies with Avalon and by the time we’d set up our tent, she’d hand-written the whole lot. Lynn dubbed the couple Doc 1 and Doc 2 since - you probably guessed - Avalon was a resident and Tim a medical student. They were on Day 1 of a multi-day trip so it was entertaining to share their firsts: lighting the stove, cooking, deciding what to put in bear bags, hanging said bear bags…. 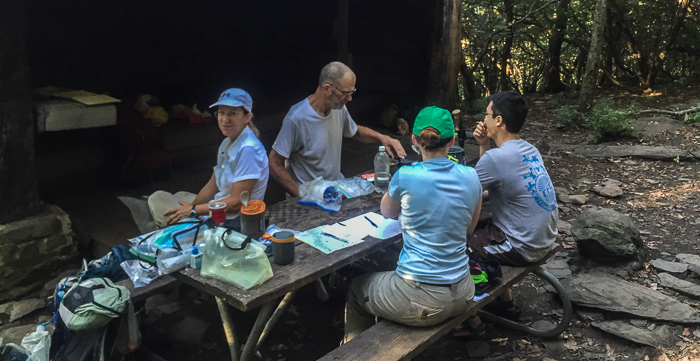 The gang at Calf Mountain: Lynn, Bigfoot, Avalon, and Tim. FYI, Calf Mountain is a called a Shelter (not a Hut) since it lies outside Shenandoah National Park.

Our biggest “!!!!” of the day came when Bigfoot rolled into camp. I saw him coming and knew I knew him, but had to pause and actually look at his feet before his name crystallized. What a boost!! We shouted to him, he exclaimed back, and we had a grand time catching up over dinner. 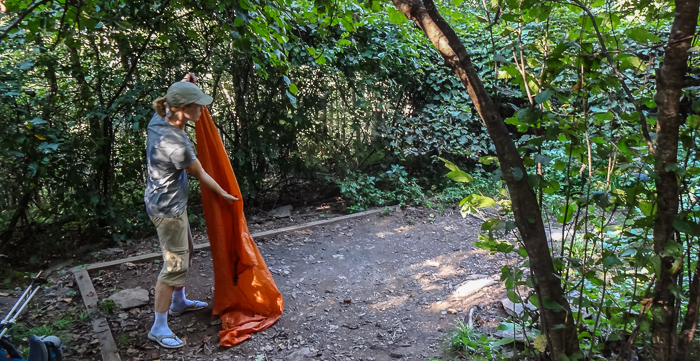 This campsite at Calf Mountain was our all-time favorite. It was super-flat and had a secluded feel with tree branches curving overhead.

Before dark, we tucked in for our last night camping. At that point I knew two things for certain: 1) I would miss Lynn; and 2) I would NOT miss sleeping on the ground. My kingdom for a bed.