This post summarizes the third of eight days I spent backpacking through Shenandoah National Park on the Appalachian Trail.  Click here for my Trip Summary to find articles, maps, and details around trip prep, packing, and lessons learned.

Houston, we have a problem.

No problem! My alarm went off at 6am and we were on the trail by 7:25. We could have been quicker, but Bonnie & Clyde and Jersey Mike stayed in the hut and the sleepyheads were still snoozing next to the one-and-only picnic table. Rather than disturb them and work efficiently at the table, we awkwardly cooked and packed behind the hut. 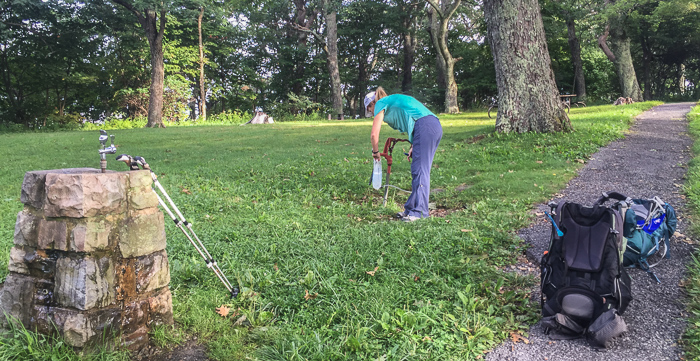 Lynn filling water from a frost-free hydrant at the Pinnacles picnic area. To use a hydrant, pull up hard on the orange/red handle and wait; water will soon gush out.

I felt footloose and fancy free at the start with only one liter of water and about a day’s worth of food. Nice while it lasted, but it didn’t last long! We arrived at the Pinnacles picnic area within the hour, and loaded up with about five pounds of water apiece from the frost-free hydrant.

A pano at Little Stony Man. The bigger rock formations (that look like a man?) are just out of the frame, down and to the left.

Just outside Pinnacles we happened upon four grey-shirted park-type folks collecting native grasses, but from that point up to Little Stony Man, the trail was quiet. Neither Lynn nor I could make out a face in the rocks, but then again we didn’t really try. This was not a day to linger; we had a mission to accomplish and miles yet to travel.

Crowds picked up significantly the closer we got to Skyland. We met one couple smack-dab in the middle of their 80-day RV trip around the country (!) and a mother/daughter duo who were hiking lodge-to-lodge. Lynn dubbed the latter couple Mary and Kay since they were perfectly appointed and looked drop-dead gorgeous. When they passed, I nearly swooned. They smelled heavenly! I shudder to think what they thought of my trailing wake; probably couldn’t get away fast enough. Truly. That was my third day in the exact same clothes. I was growing weary of my odiferous self and I’m sure Lynn was too. She could find fresh air during the day, but there was no escaping me at night, trapped together in a sweltering, 3-foot wide tent! 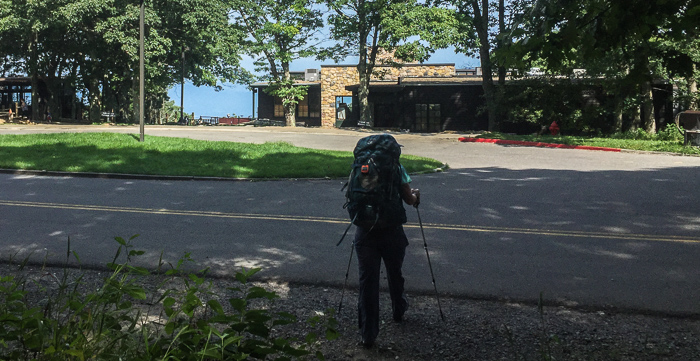 Lynn hiking to Skyland, about 0.1 miles off the AT.

Skyland provided our one significant stop for the day, and it was delightful. The resort has a deck with a view and we lucked into live music. Lynn had a number of hot spots developing on her feet and snagged the opportunity to reapply bandaids and duct tape. One of my toes was screaming at me (it had been growing worse each day) but I elected to ignore it until Big Meadows. 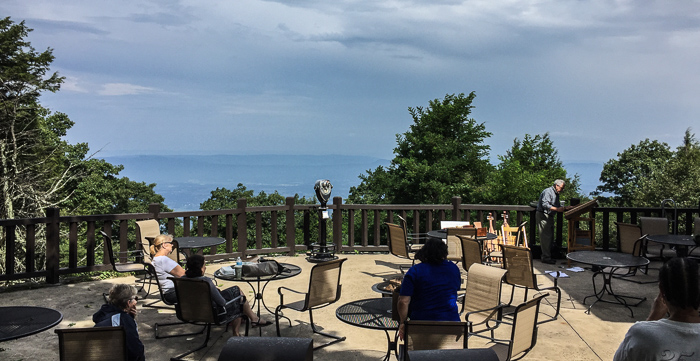 The deck at Skyland with our dulcimer musician in the lower right.

I could have stayed and chilled for hours listening to the sweet stylings of that dulcimer/flute player, but we still had eight miles to go. Once bananas were consumed and bathrooms visited, we reluctantly pushed on. Had I known we were going to see our first bear, I would have had more pep in my step. Finally, a bear! And according to Lynn, it was the perfect bear encounter. We noticed him angling ahead of us and as we watched, he cut across our path and continued around and down the hill without ever breaking stride. It was a cute little guy (or gal) the size of a big St. Bernard, likely a juvenile less than three years old. 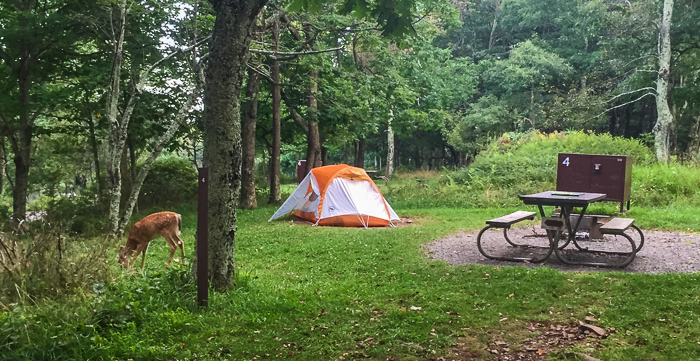 Tent site #4 in Big Meadows. It had a bear box, was perfectly situated between the toilet and laundry/showers, and came stocked with our very own fawn. Aww.

The excitement, mild as it was, gave wings to our battered feet and carried us the last 30 minutes to Big Meadows. We rolled in at 3pm and found plenty of sites available. Victory! Unfortunately, the last bit of trudging on paved campground roads pushed our feet to their limit. It required serious effort to secure the site (had to ask directions from folks to avoid unnecessary steps) and set up our tent. Once that was done, we were free to partake of two long-anticipated luxuries: showers and laundry. Yeeeeeeessssss. 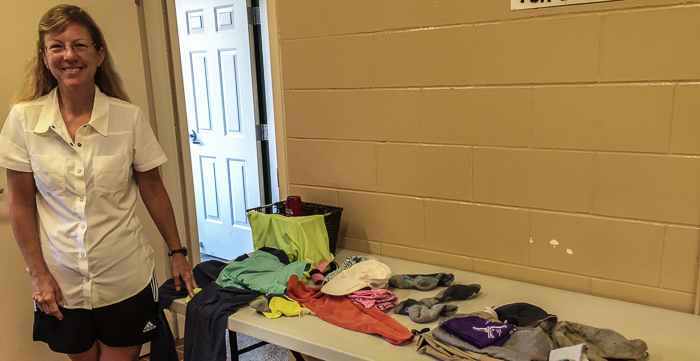 Lynn finishing up our laundry at Big Meadows. See that smile? She was SO happy to shower and put on clean clothes.

The shower/laundry area (aka Paradise) had everything my little heart desired: a vending machine with cold drinks, an ice cream filled freezer, a tiny store with snacks and sundries (really tiny, about 4’x4’), charging outlets, a change machine, and chairs and benches galore. Forget Skyland, I could have stayed here all day. Oh wait, I practically did. After showering ($1.75 for 5 minutes) and doing laundry ($1 per load), we dragged extra chairs and benches into the laundry room and stayed for HOURS. Good news: There were no bugs and we got our phones fully charged. Bad news: I couldn’t resist the snack shop and consumed thousands of empty calories. Good news: I burned about a kajillion calories the past three days, so bring on the Moon Pies. 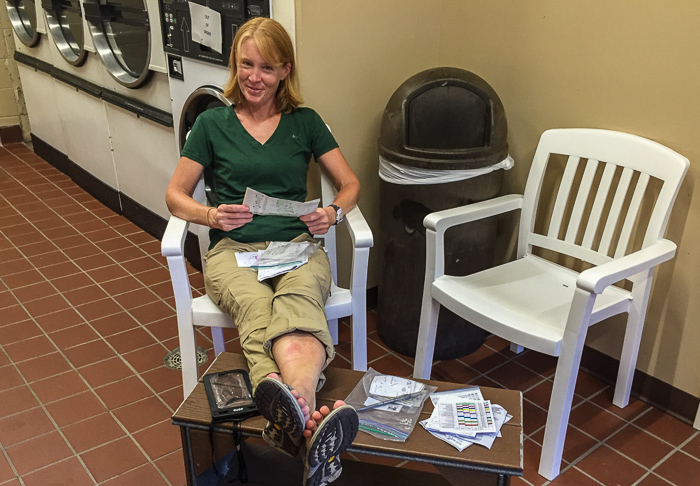 Julie lounging in Paradise. See the all that paper? We took the opportunity to check mileage and water sources and make plans for the next couple days.

Part of my time in Paradise was devoted to Foot Care Salon (a term coined by Jacob and fellow scouts on a Philmont expedition). You hike long distance, ya gotta take care of the feet, so most hikers carry a Salon kit with moleskin, bandaids, duct tape, antiseptic wipes, antibiotic cream, safety pin, etc. I took one look at my toe, whipped out my kit, and went to work cleaning, popping, and bandaging. I’ll spare you the photos, but it was bad: multiple blood blisters and angry red skin, sensitive to the touch. What to do, what to do… I’d need to make changes in the boot or the toe would continue to worsen. I chewed on that while chewing on the afore-mentioned Moon Pies. 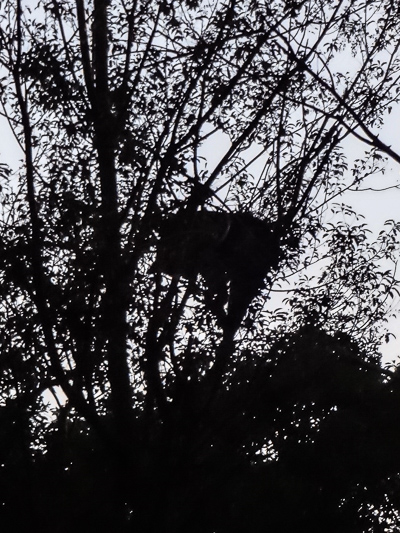 Rorschach test: What do you see? It's our bear in the tree at Big Meadows.

The laundry lady divulged that the best cell signal could be found in the parking lot by the amphitheater so we strolled over after dinner. With faces glued to our phone screens, we almost missed another bear! This little guy was up a tree, comfortably perched on branches that seemed way too slender to hold his weight. This was certainly our day for wildlife. Deer were all over Big Meadows and so tame we could walk within a few feet. 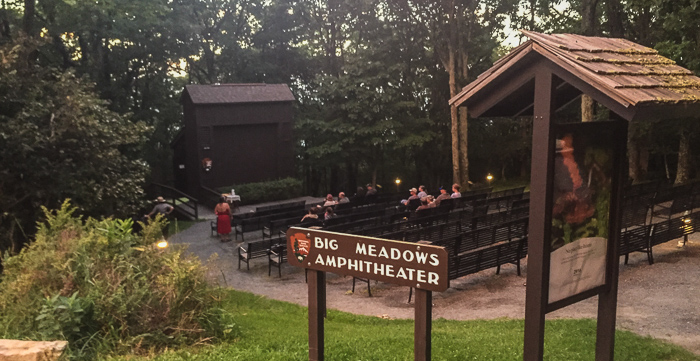 People gathering for the evening show at Big Meadows. My photos were getting worse as the hike went on, partly due to my increasingly smudged waterproof phone case.

I tried valiantly to listen to the ranger talk about Stephen Mather, first director of the National Park Service, but couldn’t muster enough energy to focus. I learned a few things before sneaking out:

Three bullets. That’s all I got.

Finally, I promised to divulge Lynn’s trail name. On this day, like the others before, we met people who asked about our hike. When we said “We’re hiking the AT through the park” they invariably followed up with “Oh, are you going to hike the whole thing?” to which Lynn would vehemently reply, “No way!”  Seriously, isn’t 100 miles enough?