This post summarizes the second of eight days I spent backpacking through Shenandoah National Park on the Appalachian Trail.  Click here for my Trip Summary to find articles, maps, and details around trip prep, packing, and lessons learned.

Huh. It felt like I shifted about 20 times in the night, and though I was sure I’d awakened at 0:dark:30, the watch read 5:45am. Not bad! I even went back to sleep for a bit. Will miracles never cease?

So far I was pretty happy with my pack organization and the gear I’d brought. I had only one complaint: my sleeping bag. With overnight lows in the high 60s, a 30-degree mummy bag was serious overkill. Ugh. I got hot and sticky during the day and added another layer at night. Is it creepy that I didn’t change clothes at all? What can I say, it was difficult to justify putting clean clothes on that body.

Needless to say, it was refreshing to escape the tent and linger over a cup of coffee and hot oatmeal; oh how I love my Jetboil. We hit the trail at 9am, taking the shortcut directly to Elkwallow rather than doubling back to the AT and looping around. You couldn’t have paid us to hike the 0.7 miles back to the AT; ZERO POINT SEVEN MY EYE! 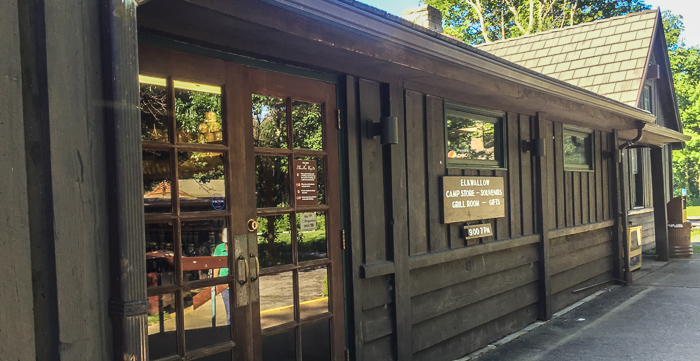 The fabulous Elkwallow store and grill.

And then there was Elkwallow. Ohhhhhh, I’m grinning just thinking of it. This was my first wayside and will forever be emblazoned in my mind as the. most. perfect. stop. ever. It probably helped that Mother Nature doled out a perfectly sunny 70-degree morning, but Elkwallow could stand on its own with that piping-hot breakfast sandwich straight from the grill, the generous and helpful store clerk, and shelves bursting with snacks. I bought a can of Pringles (the first of many) and sent a postcard to Chris. Lynn sent a postcard to Anne and called for tent-site reservations for Thursday night at Big Meadows (this was Wednesday) but the reserved sites were full. Shoot. We continued to mull our options. 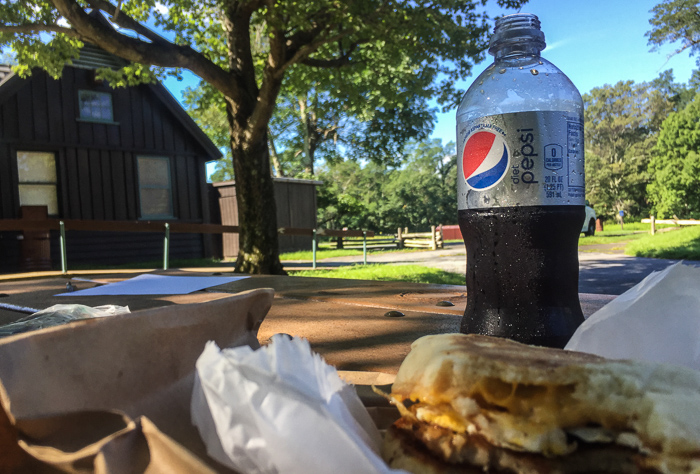 Second breakfast and a cold drink at Elkwallow Wayside.

Lydia, a tiny southbound thru-hiker, shared that we were lucky to have moved past Gravel Springs Hut the night before since an Adventure Bound group of about 22 camped there. 22 in one group! No thank you. Lynn also spoke with Psycho Killer (what a trail name) though I didn’t meet him until later that night. 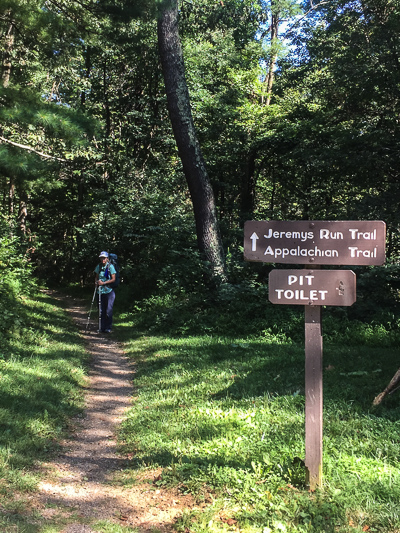 Lynn back on the trail after our breakfast stop. In Elkwallow, it's not immediately obvious where to pick up the AT. The helpful wayside clerk told us to head through the picnic area and follow signs for Jeremy's Run Trail.

Back on the trail we passed Bill, Jim, Rye and Karen who were old friends from their school days in Kentucky. They were sweating buckets but clearly enjoying themselves. Bill was pretty jealous of our breakfast at Elkwallow; he looked so dejected I was sorry I’d mentioned it! 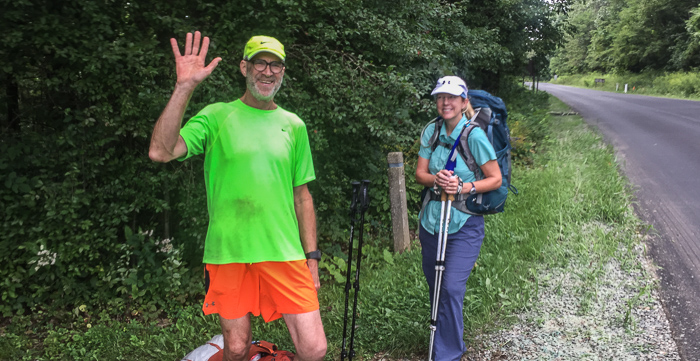 Lynn with Bigfoot. There's an AT signpost in the background showing where to pick up the trail after crossing the road. We crossed Skyline Drive a bunch since it winds through the park much like the AT does.

Right around 3pm we finally got to chat with “Neon Guy” we’d been leapfrogging for awhile. Lynn and I routinely created descriptive names for hikers, sometimes even re-naming folks when trail names didn’t seem to fit or were hard to remember (like the gal who chose an esoteric Native American term - impossible!).  Neon Guy was actually Bigfoot, and he was aptly named - HUGE feet. While waiting for his ride to the Open Arms hostel in Luray, Bigfoot shared that he was flip-flopping. In AT terms, that means he started in the middle of the trail at Port Clinton, PA, and was hiking south to Georgia; next summer, he’d start at the same spot in Port Clinton and hike north to Maine. We’d see Bigfoot again (spoiler!) and I grew fond. I know I’ll keep tabs on his Appalachian Trail Journal entries. 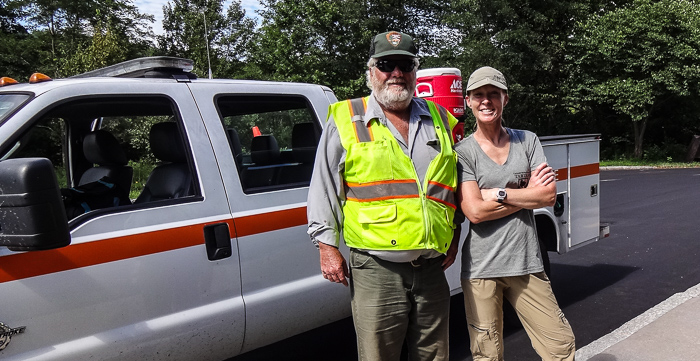 Julie and the maintenance worker who kindly offered water. See the cooler behind us?

So you’ve heard all about the most-excellent Elkwallow, but our stop at the Thornton Gap bathrooms ranked almost as high. Also known at the “Panorama RR” parking area, Lynn was going to hit up those bathrooms whether I wanted to or not. She’s all about the flush toilets, and I must admit, these were quite nice. We also needed water so when I popped out of the bathrooms first, I went looking. A trio of park maintenance workers pointed me to the hydrant across the street but then generously offered up their water, stored in an Igloo strapped to their truck. I said “I can’t take your water!” and they immediately replied “Sure you can!”. Delicious, filtered, ice-cold water. We filled every container we had and then shot the breeze for 15 minutes or so. They couldn’t believe we hadn’t seen any bears. Just that morning they’d chased one off at Matthew’s Arm and another at Elkwallow, both places we’d just been! They felt there were more bears this year than they’d ever seen, and one guy had worked in the park for 35 years.

A pano at Mary's Rock. Gorgeous spot and one of the best viewpoints on the whole trail.

We were pretty heavy for the hike up Mary’s Rock (all that water), but the view at the top was worth every step and the trail offered plenty of interesting distractions. We both stopped dead in our tracks for the trio of little pink people coming down the trail towards us. Raven, Wren and Robin were around 1, 3 and 5, and were the cutest little monkeys (“No, I don’t have a boo-boo, it’s an owie.”). Mom’s name was Ostrich, but we never did catch Dad’s; perhaps Jay?  Lynn often refers to Mary’s Rock as her gym; she’s hiked it so much she knows it backwards and forwards and kept up a running commentary on our progress. I tell you, the woman has a mind like a steel trap. Impressive recall. 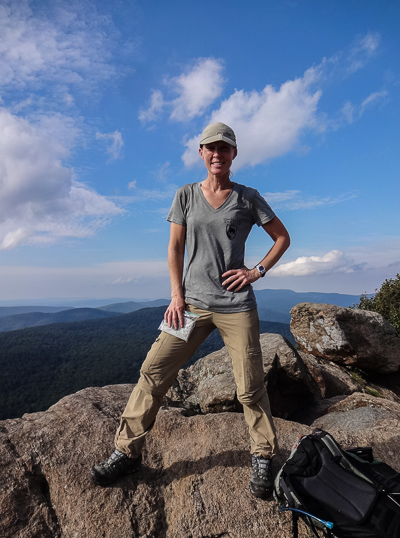 Julie, on top of the world at Mary's Rock.

We had a good cell signal at the top of Mary’s Rock, so Lynn grabbed the opportunity to make final arrangements with Steve for our resupply. It was tough to tear ourselves away, but we hit the trail at 5pm and reached Byrd’s Nest #3 Hut around 5:40pm. As soon as we rolled in, Bonnie (of Bonnie and Clyde) asked if Lynn and I were Mama Bear and Little Bear, to which I replied “Why, no.” Psycho Killer burst out laughing and asked incredulously, “Your trail name is Wino?!!” Ha! Why no, it’s not, but that’s pretty funny. Trail names can be tough; it helps if the name evolves naturally or is bestowed by another. Psycho Killer was hunting for a new name and I blurted “Qu’est-ce que c’est” since the Talking Heads song was stuck in my brain. Complex, but better to confuse than terrify? He hadn’t decided when we left, but Lynn and I refer to him as Jersey Mike (you guessed it, he’s Mike from Jersey) or Socks. Apparently he left a colorful pair of Darn Tough socks in Harper’s Ferry and when done hiking, he was going to drive a hundred miles just to go pick them up. Now that’s a Darn Tough super-fan.

Julie adding to the Byrd's Nest Hut #3 journal. From left to right that's Clyde, Bonnie, and Psycho Killer (aka Jersey Mike, aka Socks). I wish I had a better photo of Jersey Mike - love that guy and his winning smile!

Water required a round trip of about 0.6 miles so we made do with what we had from Thornton Gap; there’d be no extra hiking if we could possibly avoid it! While cooking dinner, Roxie and Company arrived. They saw six bears on a day when we saw none, and we hiked the exact same trail. What gives? I’ll tell you what gives: being loud works. Lynn dubbed me Hey-O after about the 100th time she heard me bellow. As we hiked, I’d regularly yell “Hup!” or “Hey-O!” to let our bear friends know we were coming; Lynn preferred the ringing “Heeeeey-O!” So what’s Lynn’s trail name? Stay tuned, I’ll tell you next time.

I had a lot of firsts that evening: first time staying at a hut, first time signing an AT shelter journal, and first time hauling smellables up on a bear pole for the night. If I hike the AT again, I’ll camp at huts as much as possible. Byrd’s Nest gave a hint of the unique comradery the trail fosters. After just one hut experience, I understand why disparate folks band together to become trail families for a time.