This post summarizes the first of eight days I spent backpacking through Shenandoah National Park on the Appalachian Trail.  Click here for my Trip Summary to find articles, maps, and details around trip prep, packing, and lessons learned. 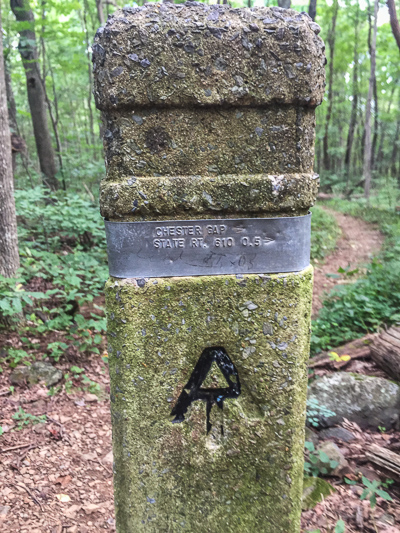 YEEEESSSS! After months of planning, we finally hit the trail!! Lynn and I were up by 6:30am to do final packing, load up, and go. At weigh-in, Lynn’s pack came in at 27 lbs, and mine 26 lbs. Not bad, especially since the weight would only decrease as we ate and drank. 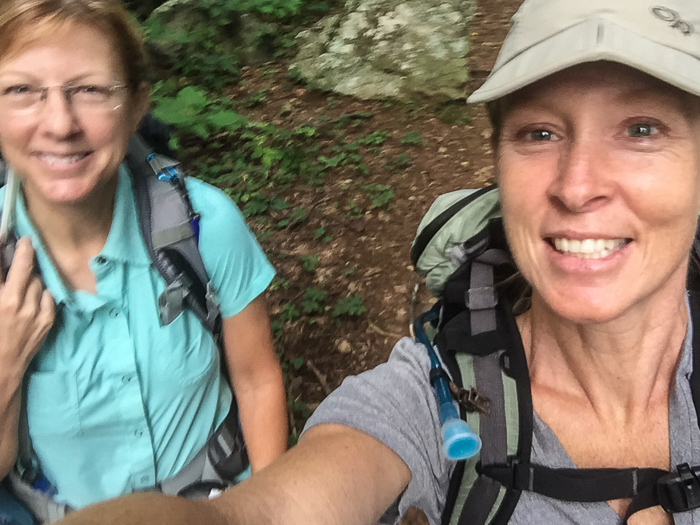 Steve dropped us at Chester Gap and after one very bad selfie (oy!), we were off. As energetic and excited as we were, I logged our first break at 9:13am. I insisted on stopping since training hikes taught me that rest is the best remedy for sores soles (not s-o-u-l-s, but bottom of the feet s-o-l-e-s). Sitting down gives some relief to swollen feet, but to really feel a difference, I need to take boots off, give a quick massage, and then re-lace boots looser. For most of the day, Lynn stopped but didn’t always sit, and rarely took boots off. Hmm. I have 8 days…I’m sure I’ll win her over to my world-famous foot-saver system. 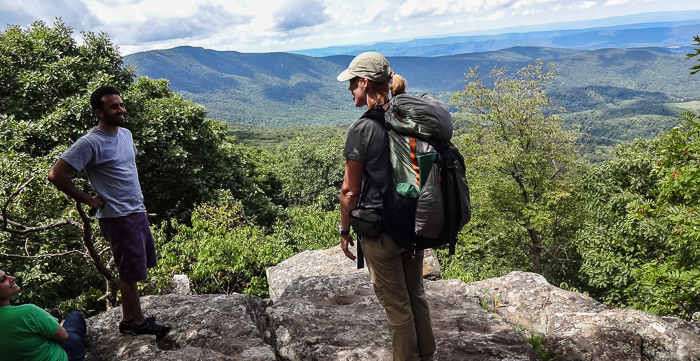 Julie at a view point, talking with a couple of honeymooners. Sweet couple! They actually called us off the trail to make sure we didn't miss the view.

Within two hours we met our first section-hikers with cool trail names: No Rain Man (he literally knocked on wood as he told us his name), Ghost, and Merlin (not a trail name, but he looked like a Merlin with his long white beard). All three warned that we were trailing a group of about a dozen southbounders, a few of whom had formed trail families and were traveling together. Looking back, I think they were speaking of Just Paul, Travis D and Reverend Honey Buns, who we eventually caught up to on Day 5 at Pinefield Hut! Ghost and Merlin added that all the bears they’d seen had been mellow; no need to yell and scream, they just ambled away. Well that’s good. There are bears everywhere, but at least they’re pleasant and well-behaved :) 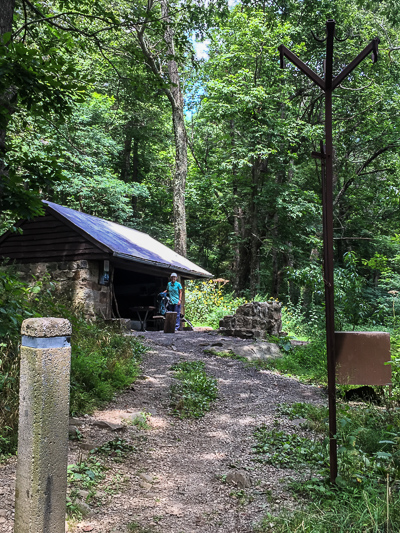 Lynn at the Gravel Springs Hut. Note the hut, fire pit, bear pole and bear box. There's also a creek with water (non-potable) and a privy.

We made a rookie mistake on Day 1. Sure, let’s hike 0.2 miles DOWN to Gravel Springs Hut and climb a heart-pounding 0.2 miles back UP for NO REASON AT ALL. We regretted this little detour later. Never again! It wasn’t all for naught; Lynn now has firsthand knowledge of Gravel Springs for future hikes. FYI: The water source was a shallow pool.

The afternoon delivered Bulldog, Go, and Pokey Stogey, not once, but three times since we kept leapfrogging each other. I loved them all, especially chainsaw-lovin’ Bulldog, but Go tugged at my heart. He’d been a thru-hiker who made it 910 miles, contracted a staph infection, and ended up in a Waynesboro hospital. He left the trail to heal and lost his umph for long distance hiking. Though he clearly enjoyed section-hiking with his buddies, that aborted thru-hike seemed to haunt him. Lynn and I thought of him often.

Remember how I said we regretted the Gravel Springs side trip? Here’s why: The guides say that to get to Matthew’s Arm Campground from the AT, follow the Tuscarorah Trail for 0.7 miles. ZERO POINT SEVEN MY EYE!! We thought we’d never get there. I’m thinking at least 1.2 miles, maybe more. Our camp host Andy later confirmed that the AT has been rerouted many times through the years and signposts may not be accurate. In fact, the AT used to follow the Tuscarorah Trail but now they diverge for over 200 miles before meeting back up in Pennsylvania. 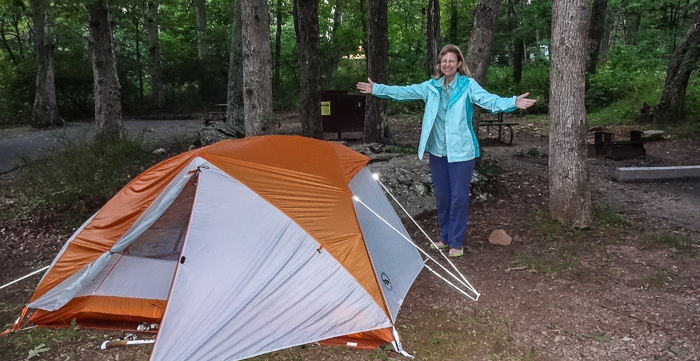 Lynn with our tent at Matthew's Arm. That's a wrap for Day #1!

Being in a campground felt a little bit like cheating, or maybe "glamping" (glamorous camping), but it was glorious to clean up in "real" bathrooms, get potable water straight from the spigot, and throw our gear into a bear box rather than hoist it onto a bear pole. Tent sites cost $15/night; spots C177 and C178 had bear boxes. 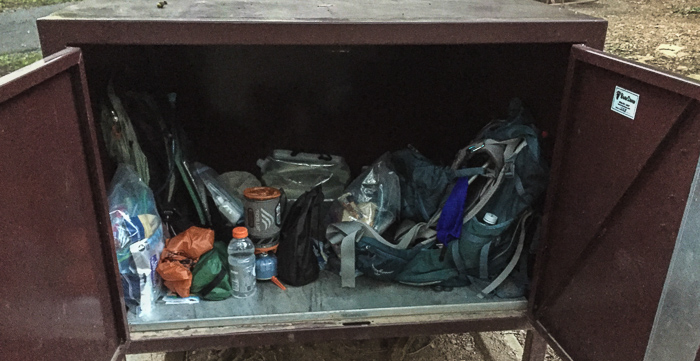 Our stuff in a bear box at Matthew's Arm. We were definitely spoiled. Bear poles (in our future) aren't nearly as convenient.

We spent a good chunk of time talking with the camp hosts, Andy and Bev. Andy had a great attitude about the bears and shared that they’re just doing what they’ve been taught. The mamas teach their cubs where to find nuts and berries and for most of the year, the forest is theirs. Come summertime, campsites open, people block their usual food routes, and it gets downright confusing. When a bear wanders in, he’s simply trying to get to his nuts and berries. He is, however, easily tempted by scrumptious people food, so campers are warned to lock up food if straying further than 10–15 feet (seriously).

Andy also explained how to best deal with snakes (this was prophetic given our encounter on Day 6) and warned that park campsites could fill up quickly in the next few days due to the fee-free weekend for the National Park Service’s 100th anniversary. Hmm.  We decided to deal with that in the morning at Elkwallow.  Second breakfast at Elkwallow! Wahoooo!!