Oh Las Vegas, I’m sorry for all the terrible things I’ve said about you over the past 30 years. I was wrong. Well maybe I was right for a while, but somewhere along the line, you grew up. Yeesh, if I’m being honest, I think I finally grew up enough to appreciate you again.

My family moved to Las Vegas when I was in the 2nd grade and though I told everyone in college that we lived in a hotel, my mom was a showgirl, and my dad was a dealer (ha!), the truth was more humdrum. We lived in a townhouse about five miles due east of the Strip, Mom was a high school English teacher, and Dad was an Air Force officer stationed at Nellis Air Force Base.

I had a stellar childhood but by the time I graduated from high school in 1987, I was done with Vegas. Done with the searing heat, done with “desert landscaping”, and done with brown, brown, brown. I never had an interest in gambling and detested the grungy smoke-clogged casinos. Sure, I have fond memories of innocent fun on the Strip (scavenger hunts, Excalibur, Circus Circus) but when my one deep abiding love was ripped away…grrr. Bally’s bought MGM and they shuttered the old MGM Grand movie theater and arcade. Plush loveseats, classic movies, ice cream cones, air hockey - why’d it have to go?? Apparently I’m a champ at holding a grudge since my blood is simmering even now. Deep breath, moving on. 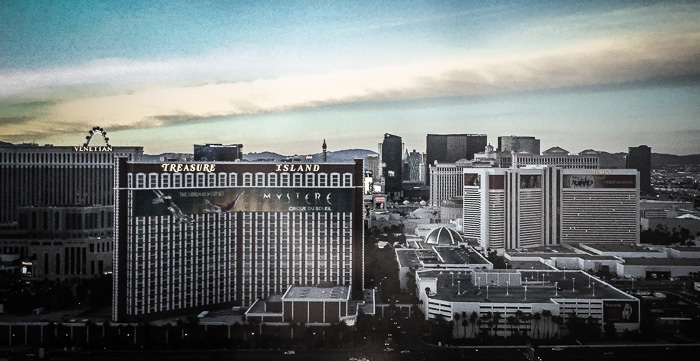 A view of the Las Vegas Strip from our hotel room

Chris and I just spent a week in Las Vegas and I’ve seen the light. Casinos and restaurants are still smoky (c’mon Vegas, get with the program) but the hotels are a marvel and the city has a uniquely fascinating history with much to offer beyond slots and blackjack. We had a taste of the Strip, saw a couple shows, visited two museums, toured Hoover Dam, and hiked four different natural areas. I’m prone to writing monster posts, so I’ll break our Vegas trip into four articles with museums, the dam, and hiking yet to come. Huge thanks to Mom and David; their suggested plans were spot-on and highlighted the other Las Vegas. 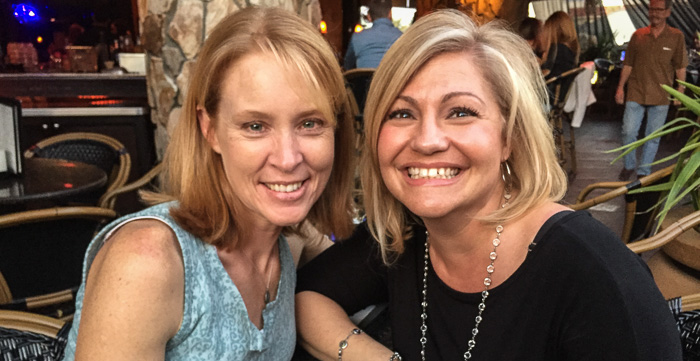 Lisa! One of my closest friends growing up :)

In addition to catching up with family and friends (always fantastic!) we engaged in a few classic Vegas-y activities which I thoroughly enjoyed, thus proving you can take the girl out of Vegas, but you can’t take Vegas out of the girl.

When did Las Vegas turn into Times Square?! The Strip always glittered, but massive screens and miles of neon have upped the ante, vying for attention with outlandish architectural wonders. We braved the near gridlock traffic since Mom insisted that driving the Strip is a cut above walking it. She was right!

As eye-popping as the Strip is, I breathed a sigh when we crossed Sahara Avenue and the world grew muted, less glitzy, and a bit tired (much like me lol). This Vegas felt more familiar. We parked and caught the 6pm light show at The Fremont Street Experience. 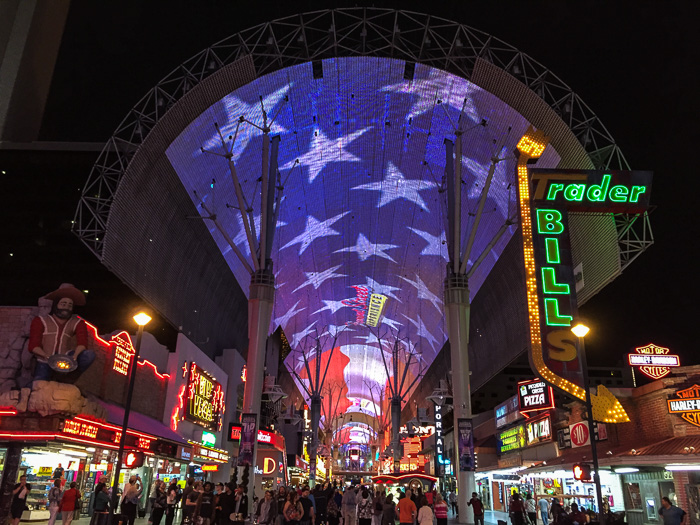 The patriotic light show during the Fremont Street Experience

These free shows generally run on the hour from dark (6 or 8pm) to midnight and each has a different theme; ours was patriotic, with music and lights enhanced by excited whoops and hollers from zip-liners high above. 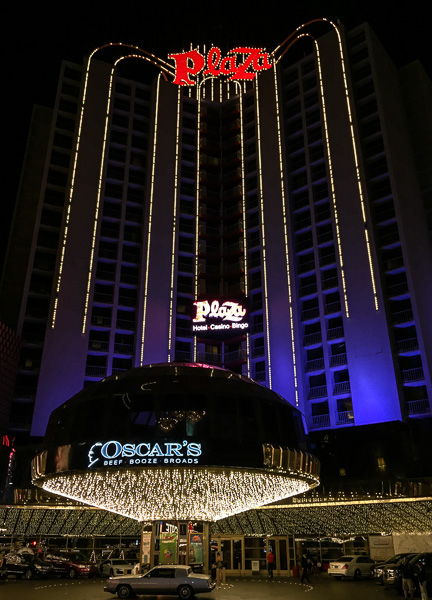 The Plaza, a classic Vegas hotel

I appreciate what’s been done for the old downtown; it’s a nod to the past but revitalized so I felt sentimental rather than sorry for it.  It definitely helped to hear David (my awesome step-dad) tell stories. He was born and raised in Las Vegas and has one of those brains that seems to suck in details and never let go.  How could I help but feel the magic when he's filling in rustic Vegas history, or recounting the time Western High improbably won a State title and his family cruised up and down Fremont Street with a host of others chanting and celebrating.

If you go, prepare yourself for the buskers. They’re a varied lot ranging from talented musicians and puppeteers to barely-clad women (and men) posing for photos for tips; certainly more entertaining than the light show!

So this is what Las Vegas can do when it’s serious, eh? Impressive! The Cabaret is a stylish 240-seat venue in The Smith Center, a stunning Art Deco performing arts complex opened in 2012. Mom and David surprised us twice, first with tickets (so generous!), and then the performer. We’d seen and loved Lisa Fischer on screen in Twenty Feet from Stardom, a documentary that celebrates backup singers who “live in a world that lies just beyond the spotlight”. Ms. Fischer was definitely in the spotlight at the Cabaret! She gave a passionate performance and stepped into the audience for a couple numbers, but her work was intimate even without the physical closeness. Ms. Fischer’s range and nuance were unparalleled, and I was blown away by the guitar-work from “crazy dreadlock guy”, aka J.C. Maillard. Wonderful evening.

My opinion might be skewed since this was a freebie with VIP seating in the 2nd row, but Vegas! The Show was fun! It’s a Broadway-style musical with a few variety acts in between scenes. There was a bit of Vegas history at the start and end, but most of the show was an homage to Vegas powerhouses like Wayne Newton, Sinatra, Sammy Davis Jr., Lena Horne, and Elvis. The band was killer with a full complement of horns; it was a treat to hear classics played by pros. Singing and dancing were top notch featuring fabulous Las Vegas showgirls, and all performers made a real effort to connect with the audience. They gave it their all and I was wowed. Overall, the theme of the night was nostalgic, “remember the good ol’ days?” and “Vegas ain’t what it used to be”. Ironic since I came with negative thoughts about the old days and was finding unexpected love for the new Vegas. Apples to apples, though, we generally weren’t speaking of the same “old days”! I don’t know that we’d pay full price for tickets, but there seem to be ample coupons available online. 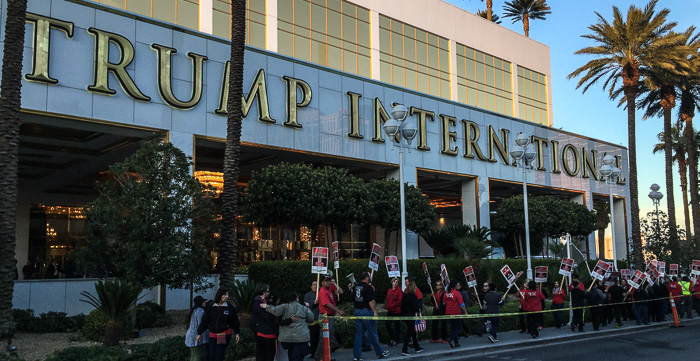 Picketers in front of our hotel, the Trump International

Backing up, let me explain why the show was comped. Our week-long stay in Vegas was broken into two parts: 4 nights at my mom’s and 3 nights at the Trump International Hotel. Why? Chris actually answered a marketing call and accepted one of those "we’ll-give-you-stuff-if-you-listen-to-a-timeshare-pitch" deals. We felt the perks were well worth the 2 1/2 hours it took to listen to the Hilton Grand Vacations Club spiel. No worries, we stood strong and said no. Good thing since later research proved that if you really want in, you can find the same packages for a fraction of the cost on the resale market.