With a full week in Las Vegas, we had plenty of time to check out new sights. My mom suggested the Atomic Testing Museum and the Mob Museum which may seem sedate for a trip to Vegas baby! but were right up our alley. Both had excellent facilities with well curated displays. Even better, each museum shared entertaining chronicles of the town’s early days and highlighted critical decisions and events that shaped Las Vegas through the years. Great choices! But hey, you didn’t hear it from me.

The National Atomic Testing Museum in Las Vegas. I did a double-take with this sign - their mushroom cloud looks like food.

Let’s get Area 51 out of the way first. As you probably know, Area 51 is an Air Force facility in the Nevada desert that has spawned wild tales and UFO conspiracy theories since it’s a restricted area, its research is top secret, and strange sightings have occurred through the years. This Area 51 exhibit capitalized on the UFO theme and was pretty cheese-tastic with many displays reminiscent of a kid’s school project. The experience was loaded with kitsch from movies and pop culture, as well as trite images of aliens and flying saucers. 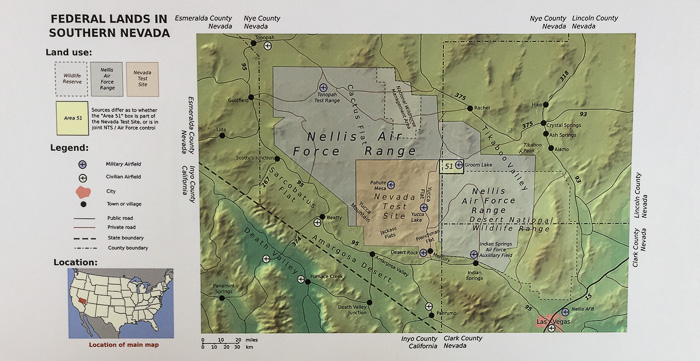 Map showing the location of the infamous Area 51

That aside, it was interesting enough to keep us engaged for 45 minutes and had a few gems including interviews with scientists from SETI and Area 51, displays describing leading-edge technology developed at Groom Lake (like the U–2), and stories of reverse-engineering captured Soviet aircraft (very cool!). I wouldn’t pay extra to see the Area 51 exhibit, but admission was included in our museum ticket. 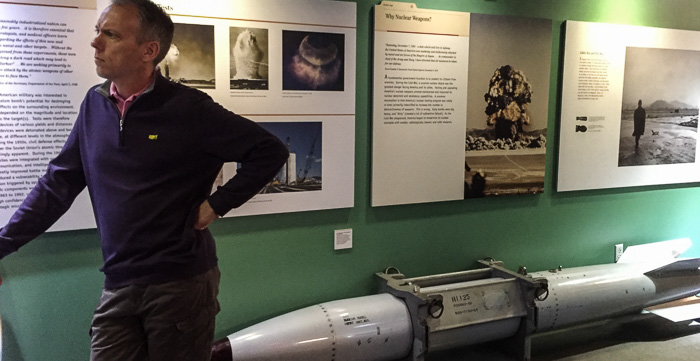 In stark contrast, the National Atomic Testing Museum was extremely well-done telling a story that began with 1940s bomb development and moved through present-day work at the Nevada Test Site. Originally known as the Nevada Proving Grounds, the site was chosen since it was secure and readily accessible (with land already owned by the federal government) and had favorable weather conditions for year-round testing. Tests could be seen and heard in Las Vegas 65 miles away, becoming a tourist attraction (!) and a boon to local business before testing moved underground in 1962. Even then, the millions spent on test site activities boosted prosperity and population growth. 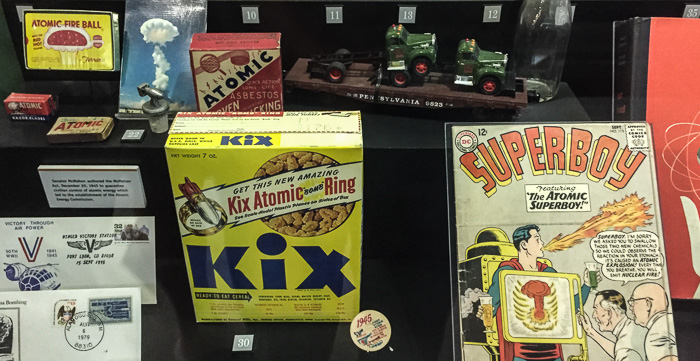 Buy Kix and get your very own Atomic Ring today!

There were a few movies including a black and white film from the 50s that was campy and cleverly described nuclear fission. Another recognized the many dangers of nuclear testing and emphasized protesters’ concerns/outrage, but also provided a look at the other side of the nuclear arms debate, citing scientists who felt they were on the front lines in the Cold War, working to keep the world safe and free. One worker stated “To see a test is to understand that it must never be used but also to see the value in having it”. 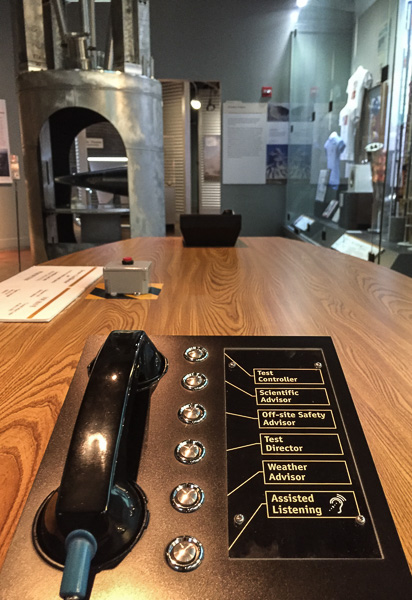 I was fascinated by the many and varied projects at the Nevada Test Site. The 828 underground tests left subsidence craters turning Yucca Flats into a surreal moonscape suitable for training astronauts for three different Apollo missions. In another area, Japanese homes were built and tests conducted to better understand fallout from the bombing of Hiroshima. A nuclear rocket, the first air-to-air missile, the Backpack Nuke, and the Davy Crocket recoilless gun…all developed out of work at the test site.

The Nevada Test Site, now known as the Nevada National Security Site, currently conducts “subcritical experiments…to help maintain the safety of the U.S. nuclear weapons stockpile”. It’s also used for emergency management, first responder, and counter-terrorism training. Lingering effects from the testing can’t be ignored, from increased cancer risk to on-site storage of low-level radioactive waste. All were addressed as we moved through the museum. 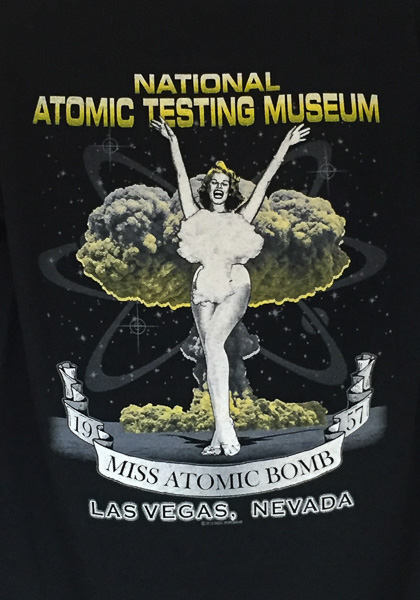 "Miss Atomic Bomb" t-shirt for sale in the gift shop

We spent 2 1/2 hours and I was maxed out and bleary near the end so skimmed over the last few rooms, unfortunately short-changing other scientific and technological advances though I recall buzzwords like high-speed photography, x-ray radiography, and high-speed optics. Rest assured, there’s plenty to keep visitors engaged, and the gift shop sells creative souvenirs if you’re so inclined.

Similar to work conducted at the Nevada Test Site, “Whether you like it or not, this is American history”. Indeed! I had no idea I was this interested in mob history, but it’s compelling stuff. Somebody should make a movie ;) 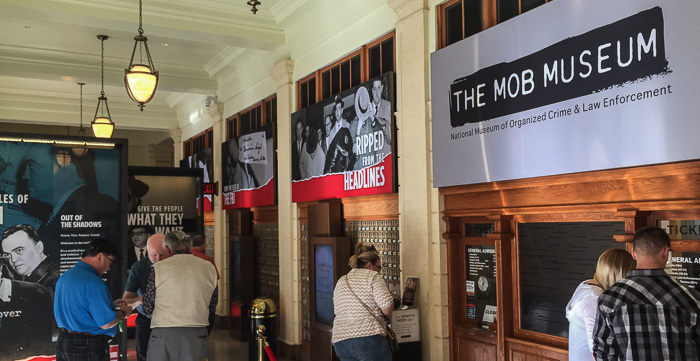 The Mob Museum lobby. Note the Post Office boxes to the left of the ticket window.

The Mob Museum is housed in a 1933 U.S. Post Office and courthouse, automatically setting the stage for history to come to life. The experience starts on the third floor with “Birth of the Mob”, the second floor moves “To Las Vegas”, and ground floor exhibits wrap-up with “Fighting Back”. It’s a all superb, but you don’t have take my word for it; check out their website - excellent resource. 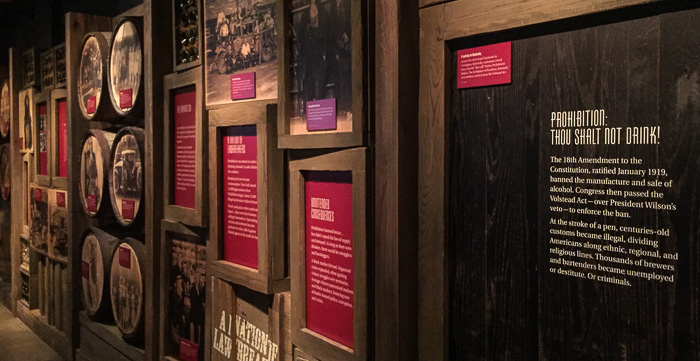 Thou shalt not drink! Or shalt thou?

We started off with Mob 101, an explanation of the poverty and crowding of the early 1900s which gave birth to enterprising schemes and rackets to fast-track the American dream. 1920s prohibition served to fuel mob activity; in New York alone, police shut down 15,000 legal saloons only to have 32,000 speakeasies replaces them. Booming business! Gangsters became bootleggers and further expanded into gambling, prostitution and money lending. 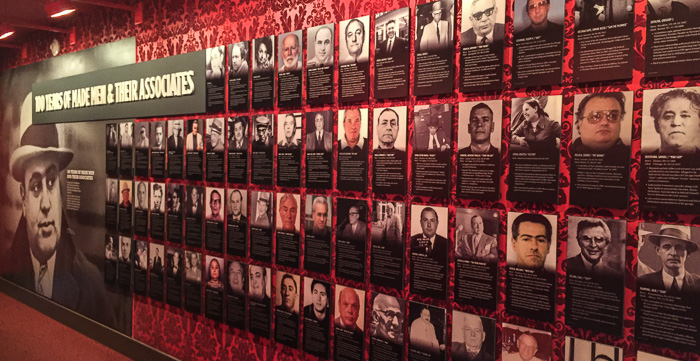 Wall of infamy. A "made man" is a fully initiated member of the mafia.

In the late 1920s the mob got down to business because “Let’s face it, crime is more successful when organized”. 1931 saw the birth of an organized body called the Commission, originally formed by the New York, Buffalo and Chicago families, but quickly grew into nationwide syndicate. Prohibition was repealed in 1933 but the mob already had firm hold across the nation. Law enforcement couldn’t match manpower and ingenuity of a national syndicate, but the museum highlights how tactics improved through the years, starting with the illustrious G-Man Eliot Ness and his Untouchables, so named because they couldn’t be bought or corrupted. 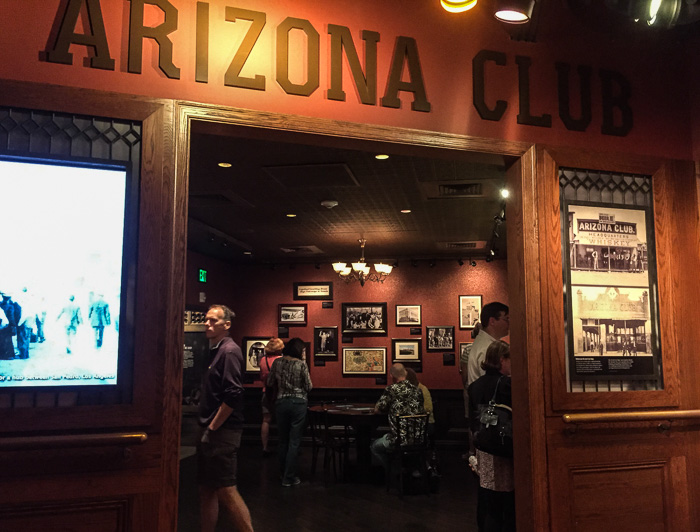 The walls inside the "Arizona Club" are lined with old photos of Las Vegas.

The museum isn’t solely a stand-and-read experience; there are interactive displays sprinkled throughout: relax in the Arizona Club and test your Vegas history smarts, swear allegiance to Omertà (a mob code of honor) and join a mob family, sit in Nevada’s electric chair (no thanks), and test your judgment and reactions in a simulated law enforcement training (to shoot or not to shoot?).

The second floor brought many revelations beginning with the Kefauver Committee, a Senate special committee tasked with investigating interstate organized crime. It held 14 hearings across the nation, 7 were televised, and one was in this gorgeous courtroom as we learned when we took a load off, sat in the gallery, and watched clips from the hearings. 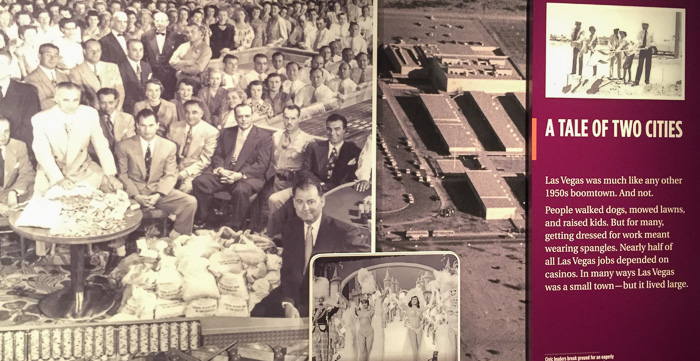 A city full of interesting jobs and colorful characters.

Stories flowed from Mom and David as we wandered the Vegas exhibits. Given the unique nature of business in this town, locals are confronted with colorful situations that they simply taken in stride, such as the sitting judge who made her way through college as a stripper, or schools that would massage conference schedules around moms working weeks-long shifts at prostitution houses. More personally, Oscar Goodman was a prominent defense attorney for many accused mobsters (like Anthony Spilatro) and I went to school with one of his sons. Mom revealed that one of Spilatro’s men lived across from us growing up; that sounds faintly ominous but I’m pretty sure I never witnessed any hits or shady transactions.

The exhibit about skimming - pocketing cash off the top from casinos - teased out the fact that grandmother Naomi (David’s mother) served on first grand jury that brought down skimming indictments in 1960–61. Nice! I also loved the “corruption is everywhere” room whose centerpiece was a movie suggesting that JFK’s assassination was a mob hit.

At this point a person might get depressed about the mob’s stranglehold, but fear not, the first floor explains how we’re fighting back with inter-agency cooperation, wiretapping, surveillance, witness protection, and immunity. These displays are surprisingly up-to-date, even highlighting the 2015 FIFA indictments. 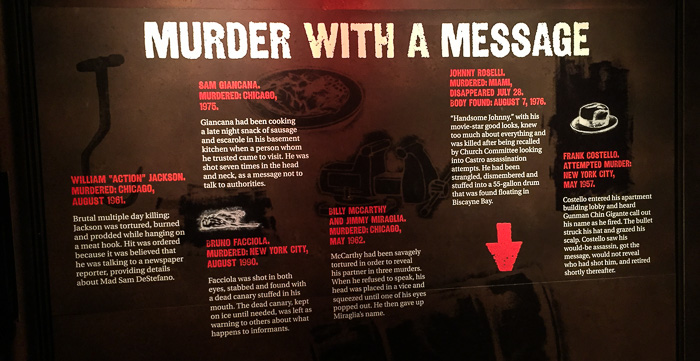 Gruesome stories and images are peppered throughout the museum.

Be forewarned, this place doesn’t pull any punches: the St. Valentines Massacre, Murder with a Message, Mob’s Greatest Hits… The museum’s movies, photos and text clearly portray the grisly nature of mob activity. Thankfully we finished on a lighter note with mob movies and TV shows, and then exited through the gift shop’s creative wares. We spent 2 1/2 hours and the time zipped by. We walked to The Triple George Grill for lunch after, a local favorite with private booths reminiscent of Irish snugs.