We had seven glorious days to explore Las Vegas which allowed ample time to see new sights while also visiting an old favorite. Chris and I hadn’t seen Hoover Dam in years so a visit was high on our list. Before we could reserve a general tour online, connections within our multi-state syndicate kicked in and set up a private tour. Know what I’m talkin’ about? Connections. I hadda friend who hadda brother who knew a guy. Ha! Yes, I visited the Mob Museum. It changed me friends, it changed me.

Back to Hoover Dam.

i love this place so much i can hardly contain myself. Admirable restraint, right? No all-caps or exclamation points, even though well-deserved.  To quote Franklin Delano Roosevelt, "This morning I came, I saw, and I was conquered as everyone will be who sees for the first time this great feat of mankind."

Intake towers on the upstream side of Hoover Dam (MorgueFile photo). What a marvel!

I enjoy traveling for the opportunity to see and learn, and recent trips have been enhanced by brushing up before-hand with a good book or two. I struggled to choose a book for Vegas but once Hoover Dam was added to the itinerary, I checked out a library copy of Hoover Dam: An American Adventure by Joseph Stevens. Love it! Stevens captures the awesome scale and scope of dam construction while also providing details of harrowing conditions and unbelievable feats. He also has a flair for describing characters, from simple laborers to the visionary, gutsy businessmen and engineers who had the gumption to tame the mighty Colorado. If a dam book is too much to tackle, a bunch of dam documentaries are available online. Dam jokes…they never get old :D

Hoover Dam’s history has so many interesting stories and gripping facts, they bubbled up out of me in a steady stream. I think Chris grew desperate for me to finish my book, visit the dam, and move on, although out loud he said he appreciated the info. 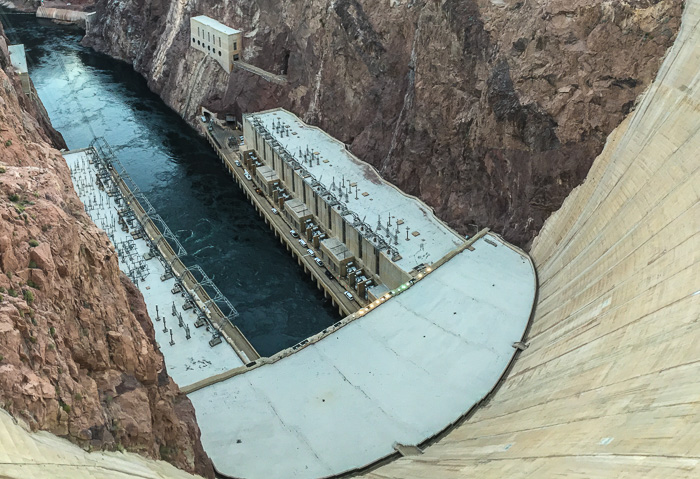 Looking down into Black Canyon. To build diversion tunnels, workers had to blast and drill through solid volcanic rock. 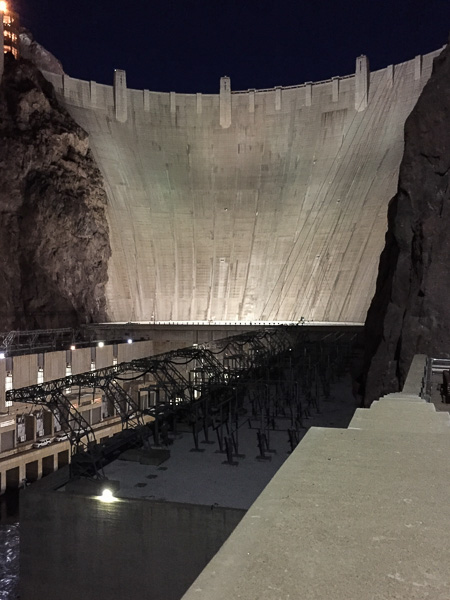 Gorgeous! The dam was poured in Lego-like sections. If it had been a continuous pour, it would have taken 125 years for the concrete to cool. 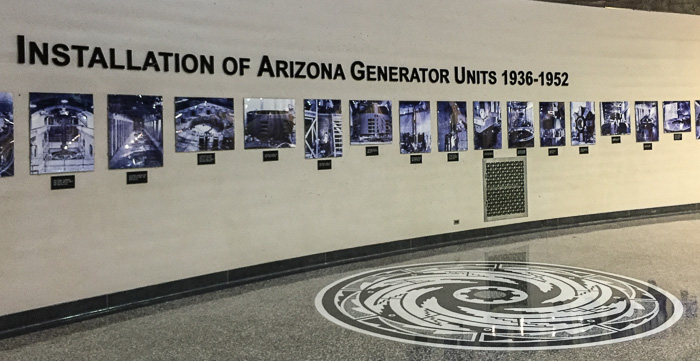 Oh boy. There’s so much more, but I’ve run on long enough and haven’t even gotten to the tour. To read about the dam is one thing, but to see it another. To start, it’s beautiful outside and in. The design is simple Art Deco with original aluminum light fixtures, railings, and doors (whole doors made of aluminum!), and terrazzo floors with Native American inspired mosaics. After stepping off the elevator, we walked hundreds of feet before I realized we weren’t walking across the length of the dam (across the river) but through the width (along the flow of the river). The dam is wedge-shaped, 660 feet thick at it’s base, tapering to 45 feet at the top. 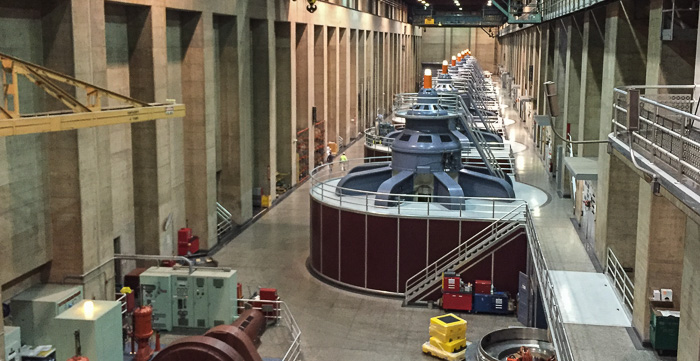 Generators on the Arizona side of Hoover Dam

As we walked and ogled, our guide casually explained the basics of power generation to help us understand the function of penstocks (pipes which funnel water in), turbines, etc. Chris later commented that although he majored in electrical engineering, this world of AC power generation is fascinating and foreign. It’s also an interesting juxtaposition of we small humans working on a massive scale, using relatively simple technology writ large. In all the years that our guide worked at the dam, he has noted just two small design flaws. First, the generators were set too close together. When equipment is replaced, heavy ungainly parts must be carefully angled into place. And second,…we forgot to ask about the second (forehead slap!).

When viewing the penstocks, we learned that dam workers have been fighting quagga mussels since 2007. The mussels grow rampantly in one part of the pipe system where water speed is juuuust right, clogging water lines and forcing operators to temporarily shut down turbines that supply electricity to over a million people. I laughed as Chris and I nodded knowingly and shook our heads in sympathy. Yup, mussels. We’ve got zebra mussels at Keuka Lake so we totally know what you’re dealing with. We have to, you know, wear water shoes so our feet don’t get cut, and pull our motorboat really high out of the water so mussels don’t latch onto the prop. We feel your pain Hoover Dam.

Our tour lasted two fabulous hours and was a highlight of our whole Las Vegas adventure. A huge thank you to all the connections who made it possible. We owe you and promise to repay in kind. Please don’t bust our kneecaps.

If you’re in Vegas, do yourself a favor and head out to the dam. Do a simple drive-by along the top of the dam, walk along Memorial Bridge for a spectacular full-face view of the downstream side, stop into the visitor center for an overview of dam construction and operation, or take a tour and descend hundreds of feet to walk inside this concrete monument to man’s audacity. It’s bound to impress no matter which option you choose.