Chris and Julie in Tralee starting the Dingle Way

Our first day hiking the Dingle Way started in the heart of Tralee at Ashe Memorial Hall. The trail soon led along the canal, and it was there that a guy stopped his car, rolled down his window and asked “What kind of holiday is this? Strapping things to your back and walking about in the rain?” We laughed and he continued, “What are you thinking? I’ll ask and answer my own question…you must be from the city.” We tried to convince him of the merits of hiking and he conceded that you do notice the small things you’d normally whiz by in a car. Still, he parted with a chuckle, a shake of his head and “…to each his own” before driving off. 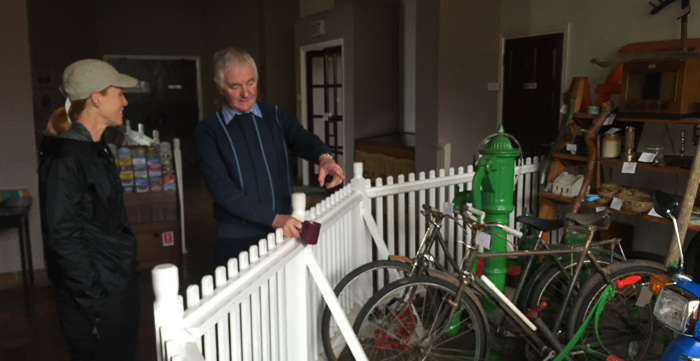 And so we began. It was fine soft weather most of the day, with sprinkles on and off. We popped into the Blennerville Windmill intending a quick stop, but stayed for close to an hour thanks to the friendly docent who joined up with us in the train room and shared the history of the old Tralee-to-Dingle steam train. The main building also houses an interesting emigration display, but the restored windmill is the centerpiece of the museum. The windmill fell into disuse in the 1850s and became derelict until 1982 when it was purchased by the Tralee Urban Council who decided to stabilize and restore the windmill. But get this: the whole painstaking restoration was undertaken as a community youth training program. It immediately brought to mind the Bowmen House Project at Sherwood High School where students gain real world skills with hands-on work. Only this is a ginormous windmill. Super cool! 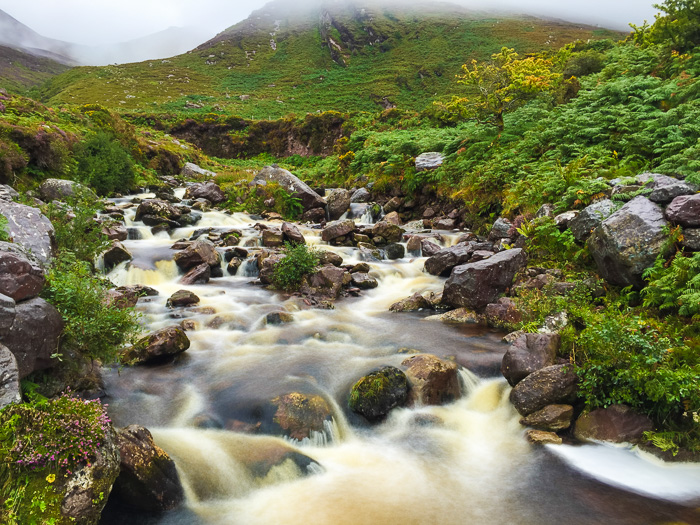 Soon after the windmill, the trial left the road and hugged the base of the Slieve Mish Mountains. It was a lovely walk with a bay to the right, mountains to the left, and heather underfoot. We laughed and joked about our friend in the car - what did he know anyway? And then, the ambush. Do you recall this article where I told of the MacDonnells luring the MacQuillans into a trap? 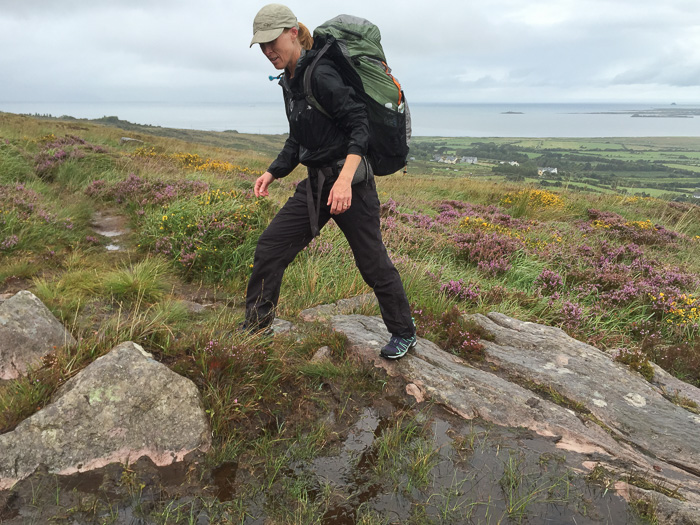 I should have paid heed, for we were similarly duped. The evil forces lured us on with gushing streams, trickling waterfalls, and the promise of clear weather ahead. Just as we dipped to low ground, they attacked! The midges were upon us in furious swarms. Run, you say, run for your lives, but how? We were surrounded by a boggy, muddy mess. To go quickly would mean a twisted ankle or a shoe sucked off in the mud. We were easy pickings, just like the MacQuillans. Ugh! 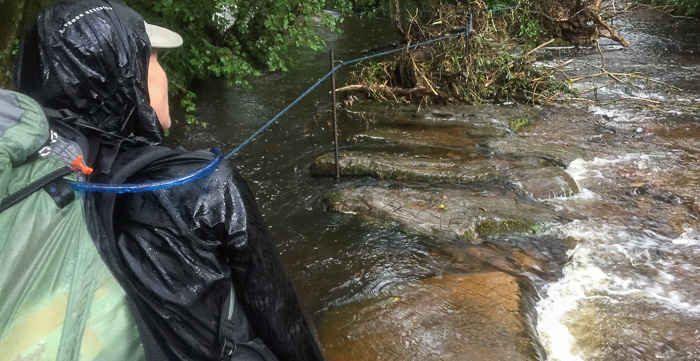 We are denied our crossing at the River Finglas

We eventually made high ground and the midges left, but the bog continued. After carefully picking our way for close to three miles, my feet were sopping and I was tired of staring intently at the ground. When the ground firmed a bit - things were looking up! - the rain started falling in earnest. Once again the trail turned to mush and to reach firm ground we had to cozy up to the gorse. We were just one mile from our evening lodging when we found our river crossing blocked by treefall and debris. Okey dokey then, nothing to do but go around. That added 1 1/2 miles to our day and by the time we arrived at the house, we were a soggy drippy mess. 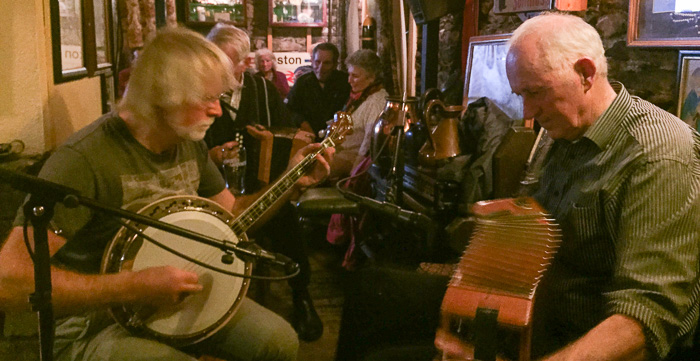 This sounds awful right? But in all honesty, we were still in relatively good spirits. How bad can it be when each night we are assured of dry clothes, warm cozy lodging, and a pint in the local pub. I also can’t help but think that if we didn’t have the rain and fog, we wouldn’t appreciate the unexpected vistas as the weather eases and mist lifts. And if I wasn’t bombarded by midges, I wouldn’t be nearly so grateful for the brisk breeze that keeps them at bay.

We are rarin’ to go for day two on the trail. Of course, guy in the car may have the last laugh. There are storm advisories out tonight and tomorrow calling for massive rainfall. Stay tuned!