What a comparison! Two days ago we explored the little known Boyd Point Gully on the west side of Keuka Lake. Today we hiked the mother of all gullies, Watkins Glen, at the southern tip of Seneca Lake. While both are accessible and fun for the whole family, they are completely different experiences. One is like a hands-on exhibit at the local science center and the other an eye-popping IMAX movie. 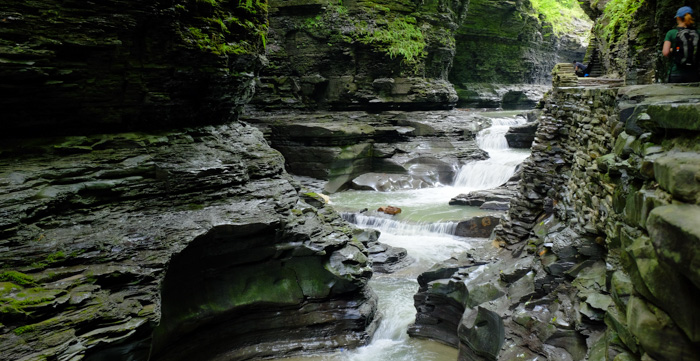 Watkins Glen is an easy 40-minute drive from our cottage on Keuka; it's a wonder we haven't come here more often! It is a stunning, rugged hike with excellent signage that succinctly explains the geology of the region. In a nutshell, glaciers moved through this region and when they receded 10,000 years ago, water filled in the "troughs" creating the Finger Lakes. Gullies, gorges and glens have been formed over thousands of years as water runs off the glacially formed hillsides and carves away at soft, sedimentary rock. The results are magnificent; you can't help but ogle at nature's majesty and the awesome power of water over time. 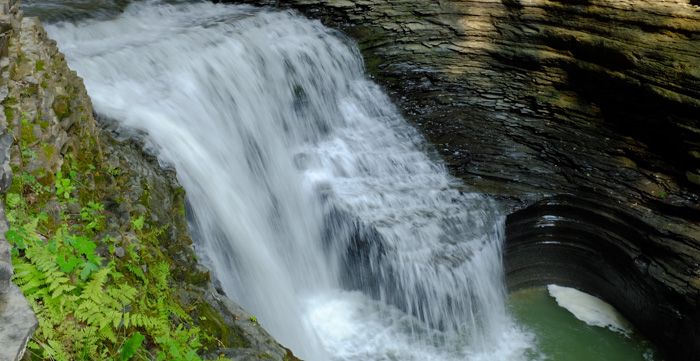 One of many stunning waterfalls in Watkins Glen

You can access the park in three places and we chose the main entrance. Here we encountered my only frustration with the park - their poorly designed entry pay station! The kiosk is set too close to the main road creating back-ups in both directions along the Franklin Street access. 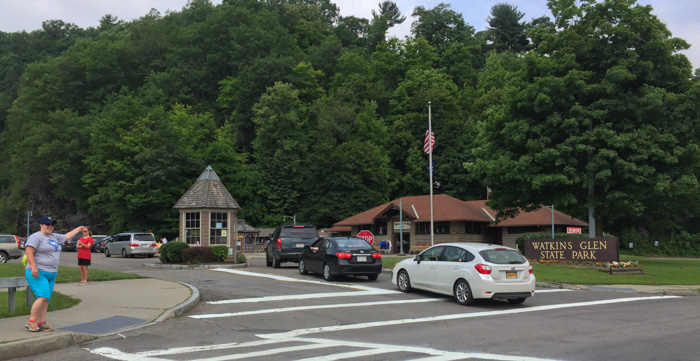 Parking cost $8 and there were plenty of spots with two lots in park and one across the street. After a quick bathroom stop, we started our hike through an entrance tunnel cut into the rock in the early 1900s. From there, we took about an hour and a half to hike up the Gorge Trail and return on the Indian Trail along the northern rim of the gorge. 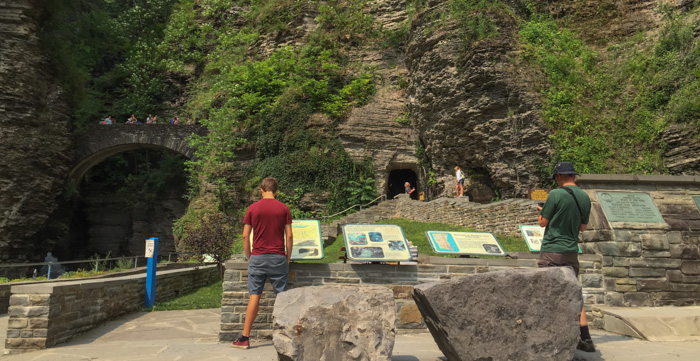 Make no mistake, this is a rugged hike. The stairs are wide and provide solid footing, but there are over 800 of them along the way; good climb! It is well worth the effort with 19 waterfalls including two you can pass behind. Note that if runoff is good, you will get wet. We hiked on a warm day and I welcomed the spray and dripping rocks. 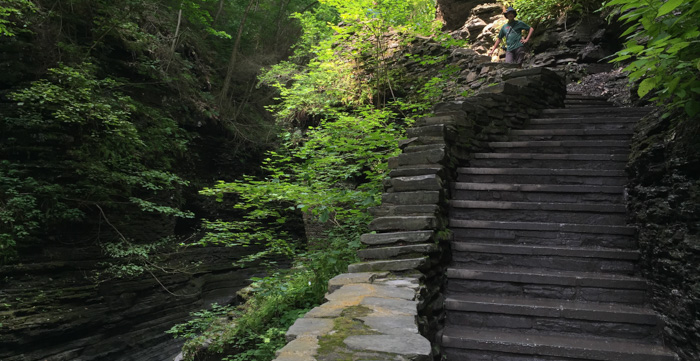 Stairs, stairs, and more stairs. Watkins Glen is a quite a climb! 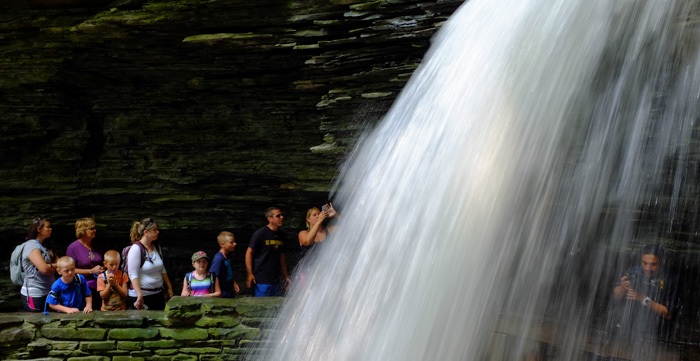 One of two waterfalls you can walk behind in Watkins Glen! 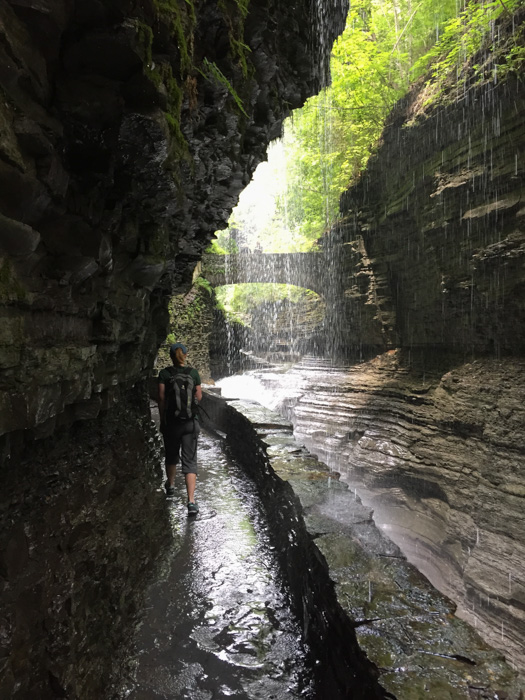 This is an impressive park with well-marked trails and plentiful amenities. The upper entrance to the park is located at the western end of the Gorge Trail. There we found bathrooms, concessions, a playground, and even a shuttle bus ($5 per person) to other areas of the park. 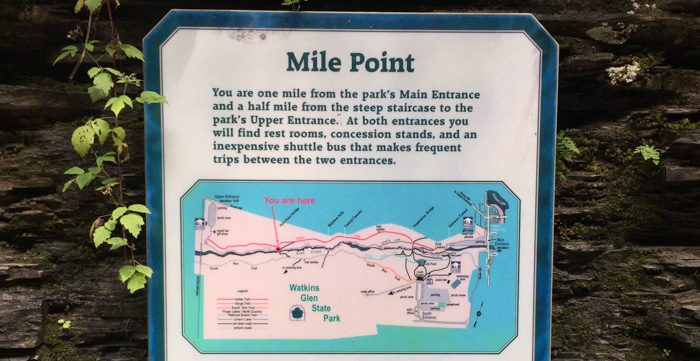 Informative signage in Watkins Glen State Park. Note the warning about the "steep staircase" to the Upper Entrance - they aren't kidding! 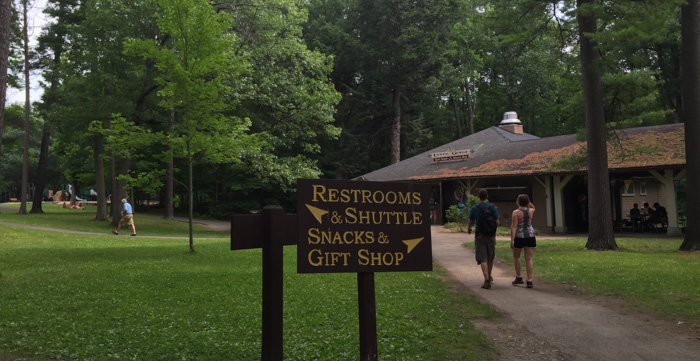 Here we met up with the Indian Trail. This is less impressive as there is little to see but the wide dirt path provides an easy walk back down the gorge.  Instead of finishing the Indian Trail, we crossed the suspension bridge to the east side of the gorge, met up briefly with the Finger Lakes Trail, and then descended Couch's staircase into the gorge for the final walk back to the parking lot. 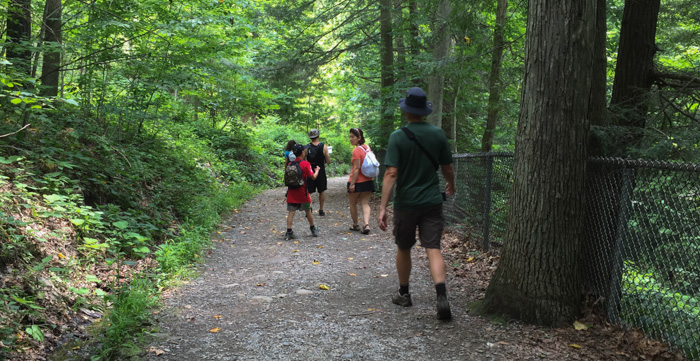 Chris strolling along the Indian Trail in Watkins Glen 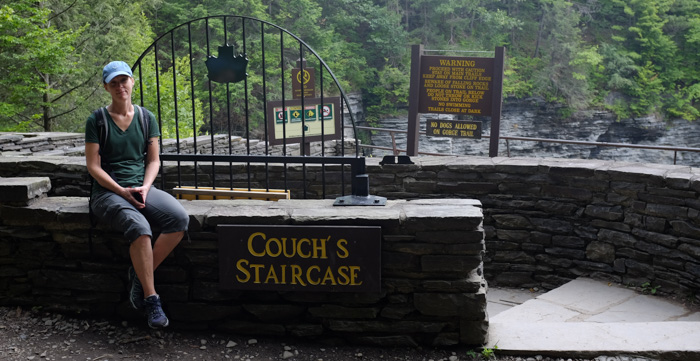 Julie at the upper entrance to Couch's Staircase in Watkins Glen

We drove into Watkins Glen for lunch at the Wildflower Cafe. It had an interesting menu and good food, but we were more interested in the attached Rooster Fish brewery; we'll certainly try their wares on the next trip. 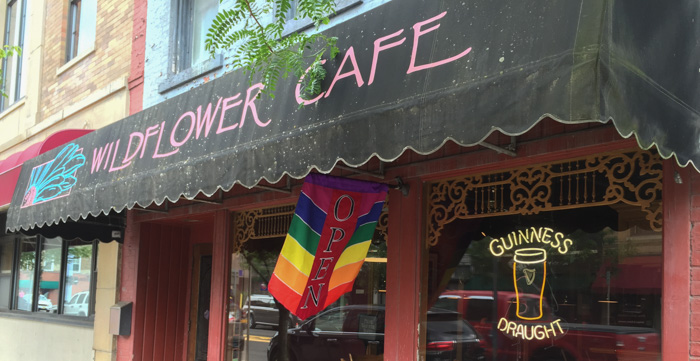 The Wildflower Cafe in Watkins Glen

After lunch, we walked a few blocks to the bustling Seneca harbor. This is a striking waterfront with a long pier and jetty, sightseeing ships, moored vessels, and restaurants. The walk along the jetty was the perfect end to a lovely outing. 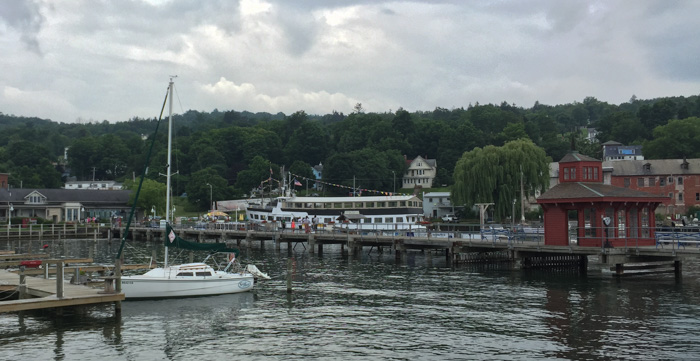 View of the Seneca harbor in Watkins Glen 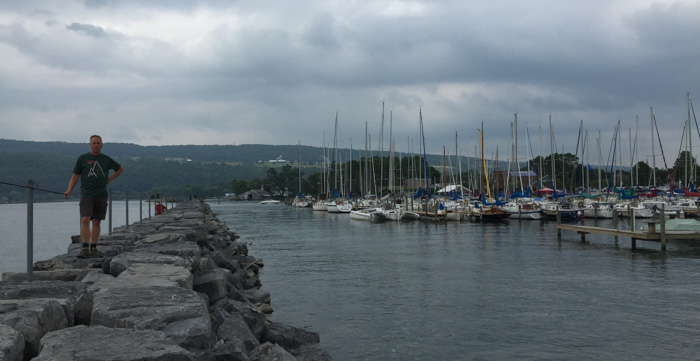