Our grand day out by the numbers: In 6 hours we hiked to 3 waterfalls, ate 44 tots, observed 1 pitched battle, witnessed 2 field surgeries, and tasted 7 different hard ciders. It was a satisfying day start to finish, but don’t hold me to the tater tot count - that was a stab in the dark. 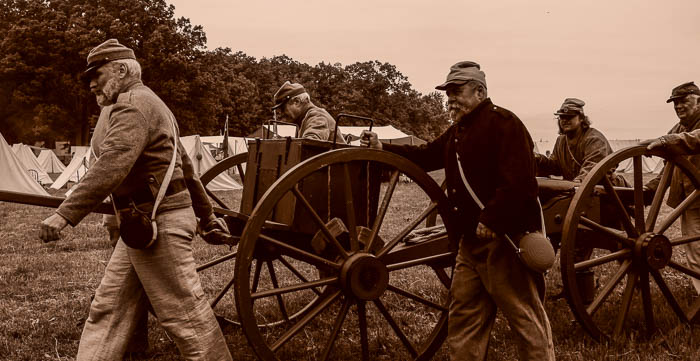 Moving artillery into place for the Battle of Lain's Mill

While summering at Keuka Lake (heaven!) I routinely check local tourism websites for area events. This Steuben County site led me to one of my best finds yet - a Civil War re-enactment just 45 minutes away! Woohooo!! That would have been plenty of excitement for me, but a friend recommended a couple other stops to flesh out our day. In order, we: 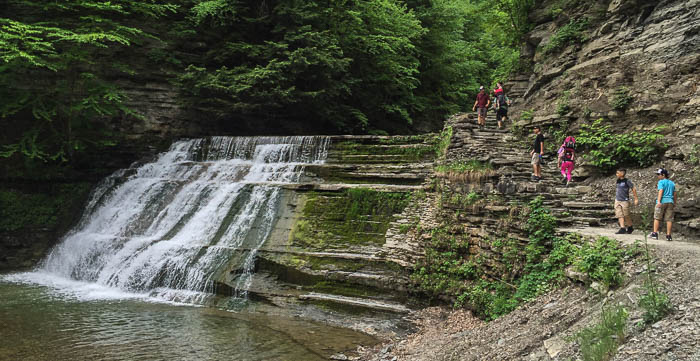 One of the three main waterfalls in the Stony Brook gorge

We’ll take every opportunity to hike another gully and Stony Brook was an excellent addition to our growing collection. Like a smaller version of Watkins Glen, this gorge is family friendly with well-tended paths and stairs on their three main trails. 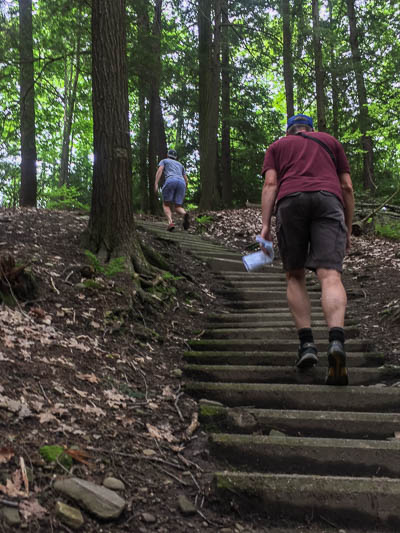 We parked on a loop near the lower park entrance, hiked generally uphill along the East Rim Trail (1.5 miles), rounded the northern tip and dropped into the gully from the West Rim Trail, and returned on the scenic Gorge Trail (0.75 miles). From where we parked, it was about 2.75 miles in all. Check out this park map for hiking trails, campsites, picnic areas, and other park amenities. 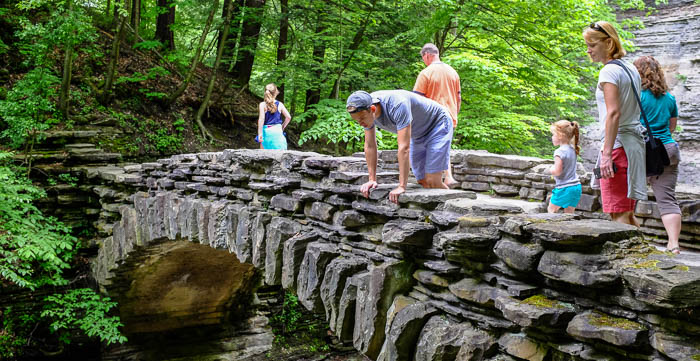 A stone bridge constructed by the Works Progress Administration in 1937-38.

If I had a do-over, I’d skip the rim trails and do an out-and-back in the gorge. While I normally prefer hiking loops, the rim trail is a run-of-the-mill hike in the woods with rare glimpses of the gorge below. The gully offers rich sights both coming and going with its waterfalls, bridges, and carved rock formations. For your reference, the forest ranger we asked recommended the East Rim Trail over the West Rim since it has fewer stairs, though you’ll encounter plenty either way. 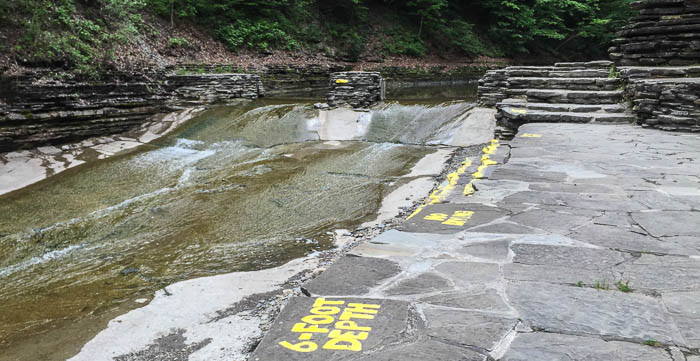 The lower gorge offered up a delight: a swimming area right in the gully! It was empty when we passed through, but when one end is blocked there’s a natural stream-fed pool ranging from 2 feet to 8 feet deep. Beautiful setting but I’d wait for a really hot day to give it a try - the water must be SO cold.

The filled-in swimmin' hole at Stony Brook. This image is a screenshot from the Stony Brook website, nystateparkstours.com/stonybrook

There’s a $7 entry fee per car with additional fees for camping and pavilion rental. Looks like the swimming is free.

We grabbed a quick lunch at Paddy’s Pub & Grill (excellent beer selection and tasty pub food) on our way to the main event: the Battle of Lain’s Mill put on by the 21st Georgia Volunteer Infantry Civil War Reenactment Unit.  What a treat! The encampment is set on 600 acres of farmland with far-reaching views of the valley below. You can’t help but get into an old-timey mood given the canvas tents, period equipment, and over a hundred reenactors dressed in costume. 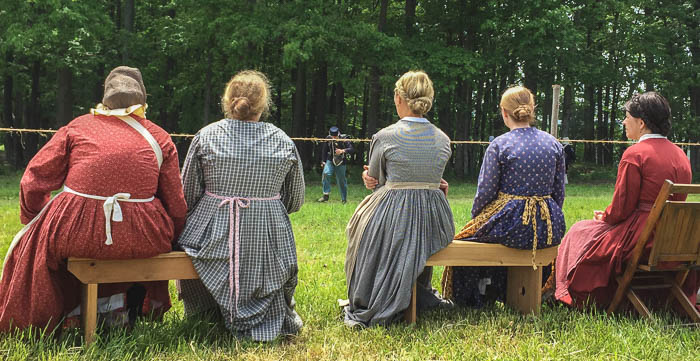 We went specifically for the battle, but as the website encourages, we could also “…stop by and chat with our soldiers and civilians, see our blacksmith at work, learn from our Civil War medical personnel, visit our mortician, inspect the artillery, chat with the engineers, pet the cavalry horses and check out the soldiers living in their trenches in the woods.” 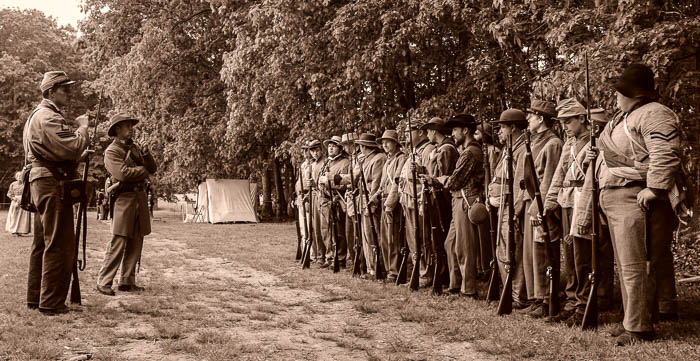 Confederate troops forming up before battle. The first skirmish took place in the woods behind this line of soldiers.

We were glad we showed up a bit ahead of schedule since the battle started at 1pm, not 1:30 as the website said; I would have hated to miss it! There was no Civil war battle at Lain’s Mill - it’s a titch too far north for that - so the unit designed battles taking advantage of the terrain. 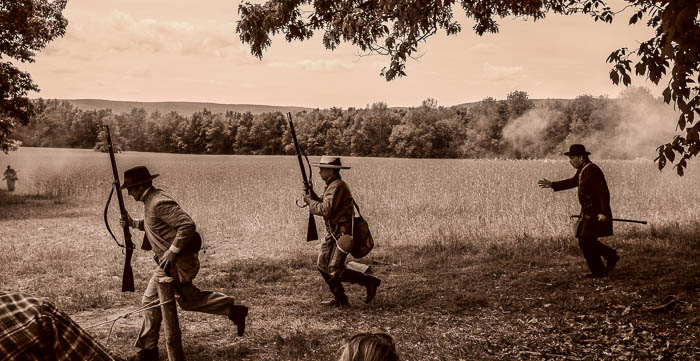 Union troops retreating. In the distance to the right, you can see smoke from Confederate canon hiding in the tall grasses.

On Saturday, we witnessed a skirmish in the woods in which Union troops had to repeatedly fall back until they were pushed out of the woods, across an open field, and into a second copse of trees. We were told that Sunday’s fight would simulate an open field pitched battle. 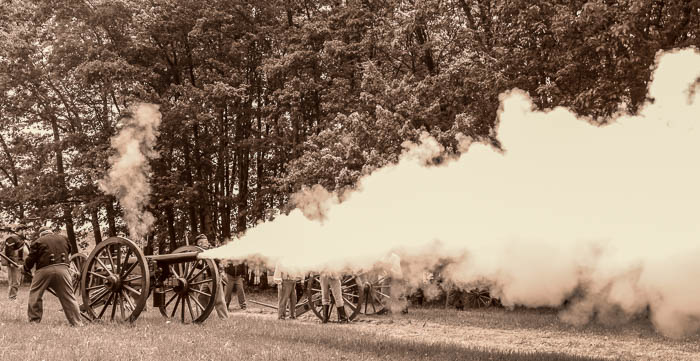 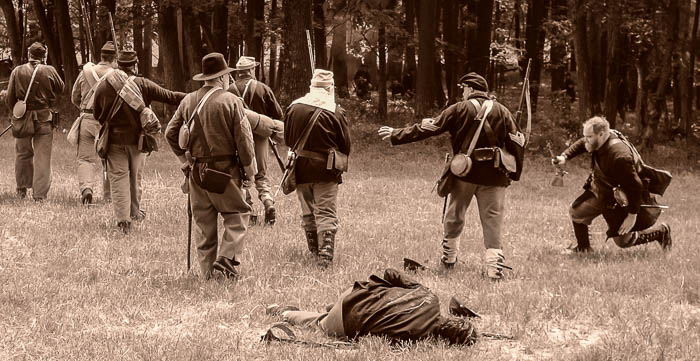 Union troops shot down as they retreat through an open field

Artillery provided a particular thrill, especially when three Confederate cannon fired simultaneously; talk about shock and awe! The soldiers did their best to depict a real battle, so more than a few fell to the ground, some “dead” and others writhing in pain. We saw a couple soldiers leave the battlefield and walk through camp and it wasn’t until later that we put two-and-two together: they were headed to the medical tent for treatment. 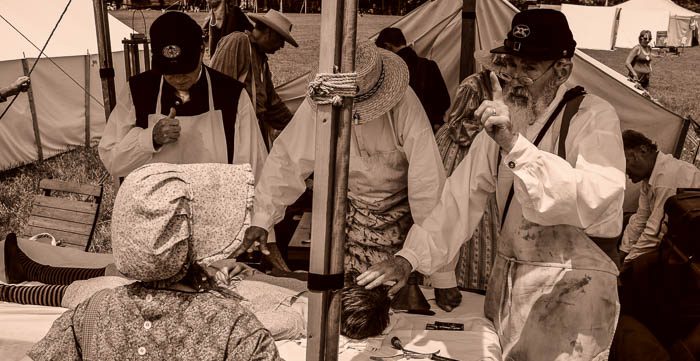 The field doctors gave quite a show providing running commentary while performing two surgeries, one to relieve pressure on the brain, and one to amputate an arm that was beyond repair. Although obviously fake, we cringed and groaned along with the rest of the gathered crowd. I was okay watching the doc dig around in a little girl’s skull, but had to look away briefly when he bore down to saw a boy’s arm off (!). Beware if you visit with young or sensitive children. 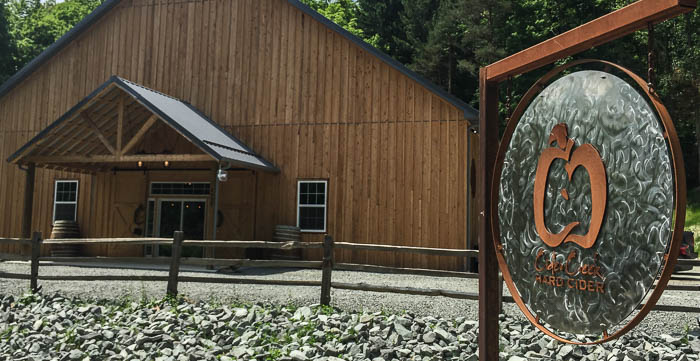 The weather turned hot and still, so we made a cursory pass through vendor tents before loading up and heading for Cider Creek Hard Cider, just 5 minutes away. Chris and Jacob each ordered a flight of 4 tastings ($8/flight or $10 to keep the glass), while I stuck to one 4 ounce pour ($2-$3). The cold cider was delish; a refreshing way to finish out the day. 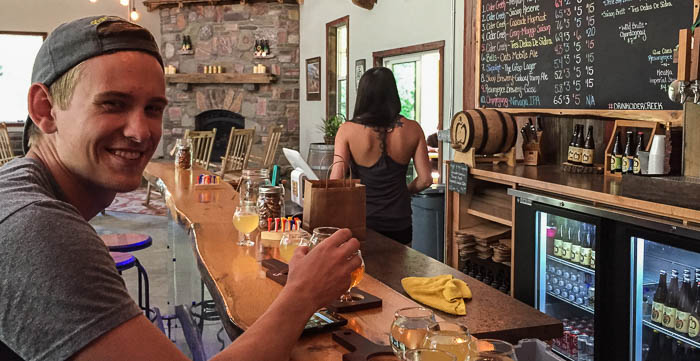 Jacob enjoying his flight of 4 at Cider Creek

We later purchased a bottle from Hammondsport Grocery at the south end of Keuka Lake. They have an extensive selection of craft beer and cider; definitely worth a stop if you’re in town!