Chris planned a surprise trip to Cancun in May (for our 25th anniversary!) and though we had just three full days in the area, we devoted one to Chichén Itzá. The site is over 130 miles from Cancun so it’s quite a commitment, but hey, it’s one of the seven wonders of the modern world; we figured it might be worth the drive.

He booked a tour through Cancun Best Discounts which cost $144 for the two of us and included food, drinks, and stops at Hubiku, Chichén Itzá, and the colonial city of Valladolid. If you go this route, be prepared for a loooooooooong day. How long? 12 1/2 hours long, 7:30am to 8pm. No matter how you slice it, this excursion is tiring. A handful of folks were clearly struggling, especially with the heat and humidity. We passed time on the bus learning from our tour guide, sampling complimentary food and drink, and zonking out once or twice, but still. The day had a few stretches that dragged on. 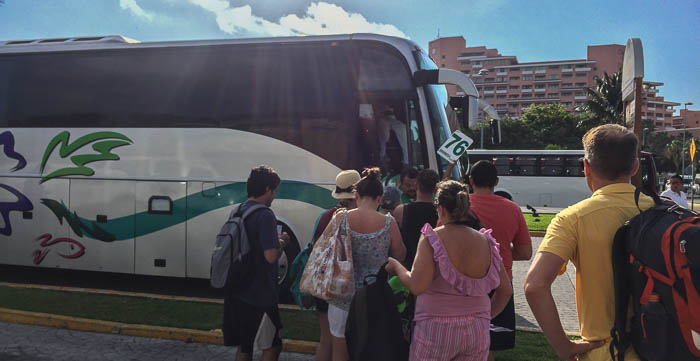 Chris and I like to avoid crowds and explore at our own pace, so a bus tour is atypical. I appreciated this one, however, perhaps because the day was so exhausting. No need to expend energy figuring out directions, food, gas, or who is alert enough to drive (!). We simply placed ourselves in the hands of Raul (the bus driver), Victor (our tour guide), and Dianela (our hostess for the day); a nice change of pace but unlikely to become a habit.

I’ll start with the highlights - Hubiku and Chichén Itzá - then rewind for a step-by-step description of the tour. 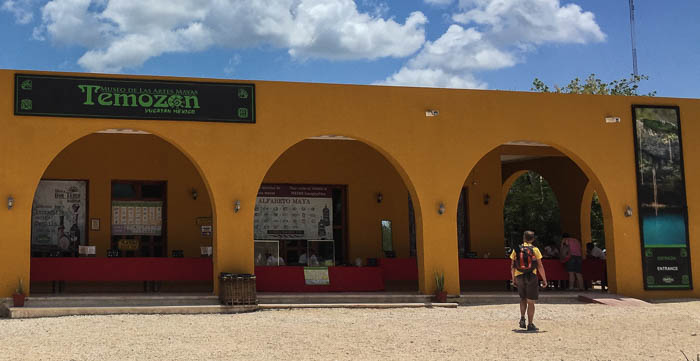 We spent two hours at Hubiku and in that time could swim in the cenote, sample tequila, explore a Mayan village, eat lunch, and shop for personalized souvenirs. Before leaving the bus, Victor assured us that our belongings would be safe on board (no need to lug stuff around) and also implored us to sample tequila after swimming - safety first!

Though the bus would be locked, Chris and I still carried our backpack since it held a towel, sandals, swim-suits, and sunblock. We made a bee-line for the changing rooms, showered (mandatory), and walked down to the cenote. 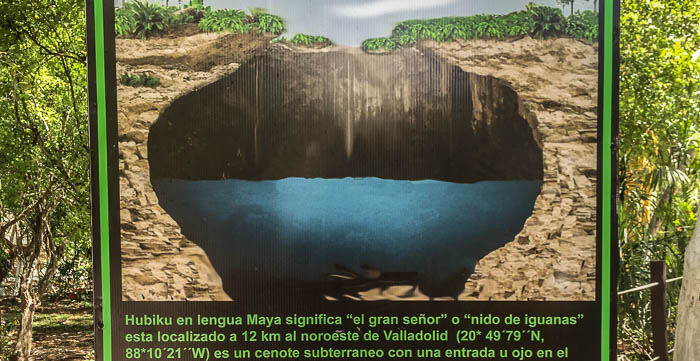 What is a cenote? Very simply, it’s a sink hole that provides access to one of the thousands of underground caves and rivers on the Yucatan Peninsula. For a more complete description, read my post about our adventurous excursion to four different cenotes. 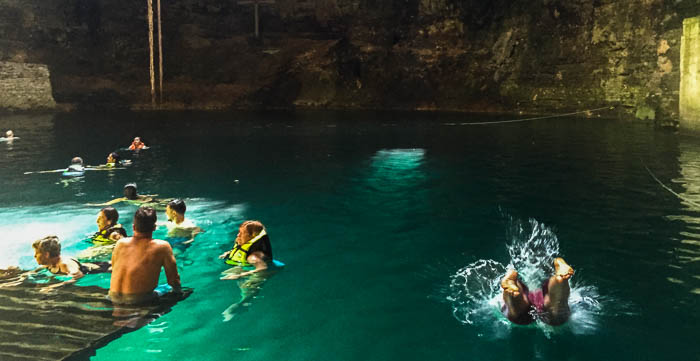 Chris diving into the Hubiku cenote

Each cenote is unique and this one was vast at 230 feet wide with a 26-foot opening at the top. The water was a brisk 65 degrees, but refreshing on a hot day. Chris and I lingered, enjoying the echoing cavern, catfish, cave swallows, and tree roots dangling from 90 feet above. It cost $1 to rent a locker for our backpack and shoes, and we tipped a painted Mayan warrior a few dollars for a photo. 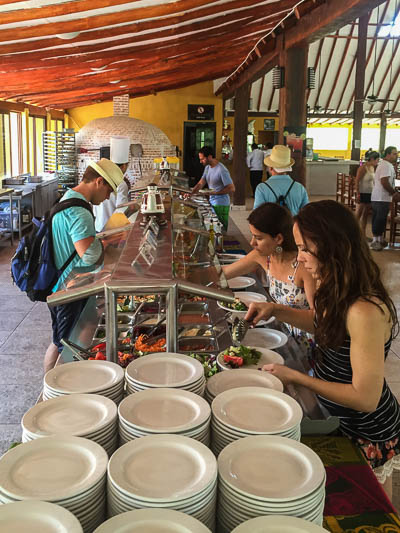 Quite a spread for lunch

Though the tequila shop had seemingly hundreds of varieties to sample, we tasted just a few before grabbing lunch. The buffet was a lovely surprise, offering a wide selection of local dishes along with a host of salads, sides, veggies, fruit, dessert, and complimentary water, soda and beer. 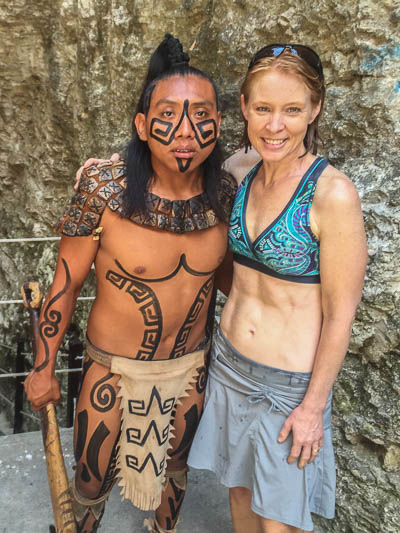 Julie with a Mayan warrior

With about 15 minutes to kill after lunch, Chris and I strolled through the little Mayan village, learning about customs and day-to-day life from posted signage.

This was a nice stop for the cenote but like many areas in and around Cancun, Hubiku was designed to entice tourists to open their wallets. Nothing was a hard-core sale, but Chris and I said “no thank you” more than once.

Prior to the trip, the sole image I’d seen of Chichén Itzá was the main temple of El Castillo. It was a revelation to learn that the site encompasses 20 square miles and visitors typically see just 20% of the property. 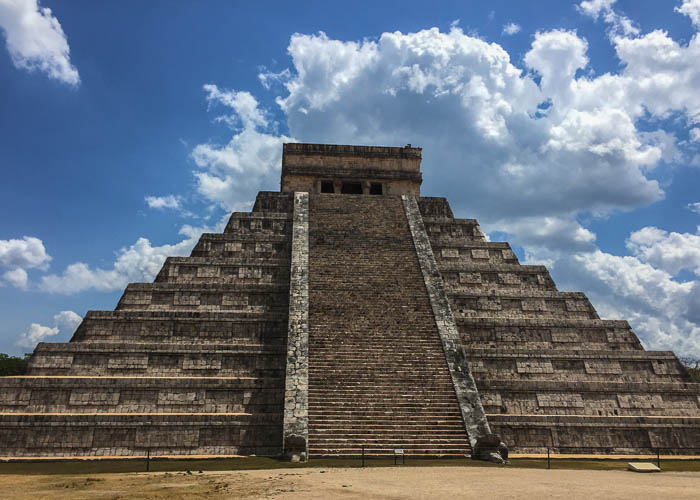 Chichén Itzá was one of the greatest Mayan cities on the Yucatan Peninsula, with the site first used in the 6th century, growing to prominence around 900 A.D. It was a walled city, but the walls probably weren’t for defense (too low) but rather to divide social classes; kings, nobles and priests inside, peasants and slaves outside.  The Maya developed their cities around a sacred design, as described in this post.

The Maya are well known for their advances in mathematics, astronomy, astrology, and calendar system, but Victor stressed that the high-class likely used that knowledge to control the masses and play on their fears, which may have contributed to the civilization’s decline. Scholars point to overpopulation, disease, political upheaval, and drought as other possibilities, but suppose the Mayan rulers held firm control due to their almost magical ability to predict the future, particularly the weather. In a period of extended drought, “powers” would no longer work leaving masses disillusioned and disgruntled (not just thirsty and hungry). This article references Robert Sharer who said “Ultimately, the power of kings depended on their ability to control resources…”. People are resources. Interesting theory. 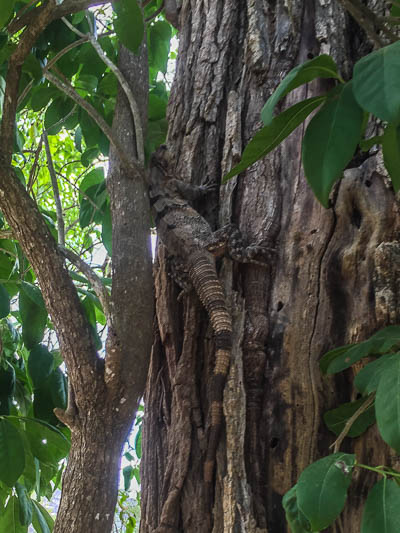 The Chichén Itzá we see today is a hybrid of many cultures’ influence and has been rebuilt through the ages by the Maya, Toltec and Aztec. There’s actually a smaller temple inside El Castillo! I was confused by the different Mesoamerican civilizations but this article helped clear things up: Maya are the oldest, then came Olmec, Inca (down in Peru), and Aztec. Wikipedia puts the Toltec in between the Olmec and Inca.

Chichén Itzá is a fascinating place with hundreds of fun facts; here are a few that intrigued me: 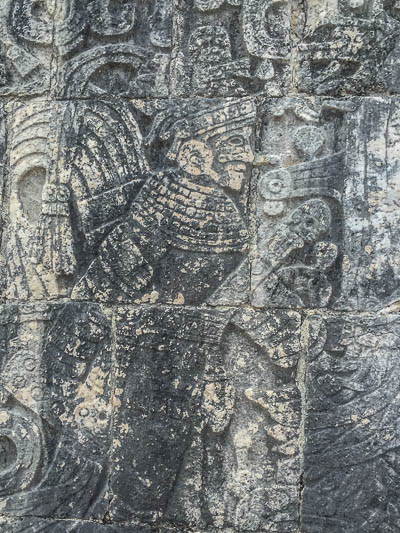 A stone carving on the Ball Court at Chichén Itzá 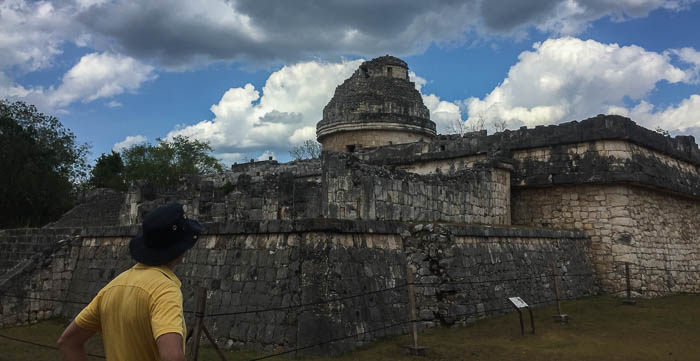 Once Victor finished, Chris and I walked for about an hour taking in the Temple of the Warriors, the Thousand Columns, the uniquely shaped Caracol (an observatory), and other ruins. There must have been a hundred vendors hawking wares, the ROOOWRRR! of their jaguar whistles piercing the air over and over and over. We visited in May so the crowds were light and it was rare to see anyone making a purchase; how in the world do these people make a living?? 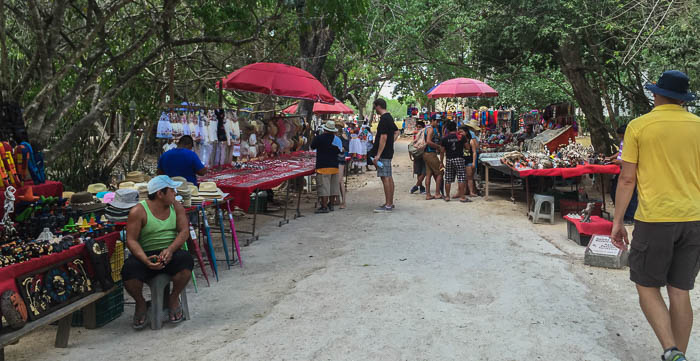 A fraction of the vendors lining pathways at Chichén Itzá

We were hot, dusty and parched by the end and I fervently wished for ice cold water followed by ice cold beer. Sometime dreams come true; I had both within minutes of stepping on our bus. Ahhhh.

Backing up, here’s how the day unfolded: 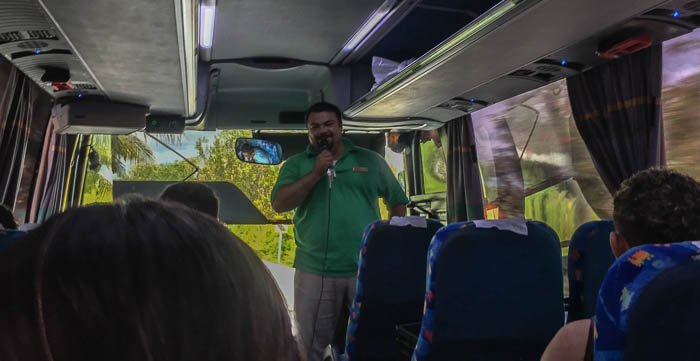 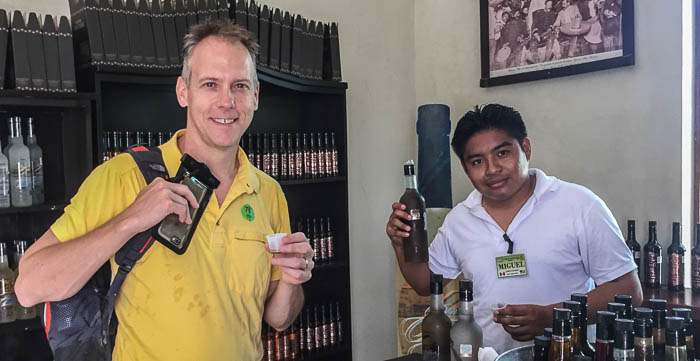 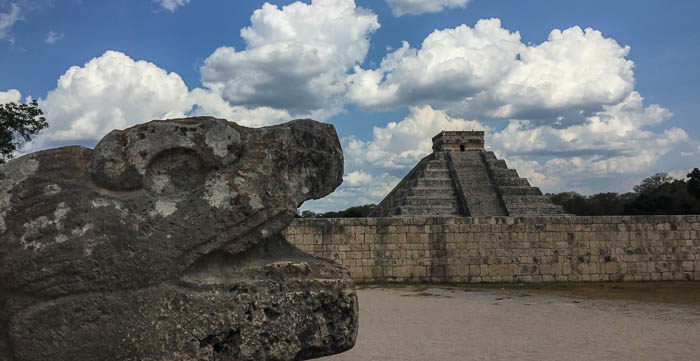 At Chichén Itzá: Kukulcan (the serpent deity) with El Castillo in the background 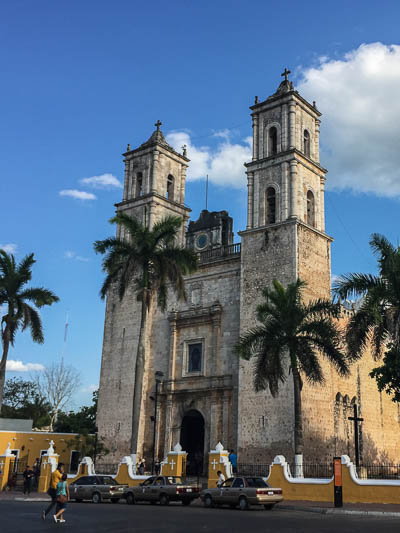 The San Gervacio cathedral in Valladolid

As you can see, they certainly kept us well fed and hydrated. The driving was monotonous, but I was glad to have a glimpse of the “real” Mexico not just Cancun’s Hotel Zone. Two things stood out: the poverty was striking, and the jungle wasn’t as jungle-y as I thought it’d be (in my head, the trees were taller and vegetation more dense).

If you go, bring a bag or backpack with beach towel, sandals, sunscreen, hat, sunglasses, and bug spray. We didn’t really need the snacks and water we brought, but they’re always good to have as backup. Be sure to wear good walking shoes, both for the support and to keep feet clean. As it was, we each had a distinct line when we took shoes and socks off: the feet were white, and ankles a grimy brown/black. Very dirty day!  Finally, purchase the tour in advance online; prices seemed much higher at the booking kiosks in Cancun.

One last fun “fact”: The Maya believed that if a baby was born under a full moon, he was destined to become a warrior. I Googled a bunch of family birthdays and only one was born during a full moon: our son Matthew who is attending the U.S. Military Academy at West Point. Huh.