I’m not worthy...  The most spectacular feature of the Charles Fort is its layout and my photo does not do it justice, not in the slightest. Do me a favor and take a quick look at this aerial photo from the Kinsale Chamber of Tourism. Amazing, right? Charles Fort is just one of five star forts in Ireland and is flat-out fun to explore. I felt like a kid roaming the expansive interior, peering into dim sally ports, and scrambling atop fortified bastions. 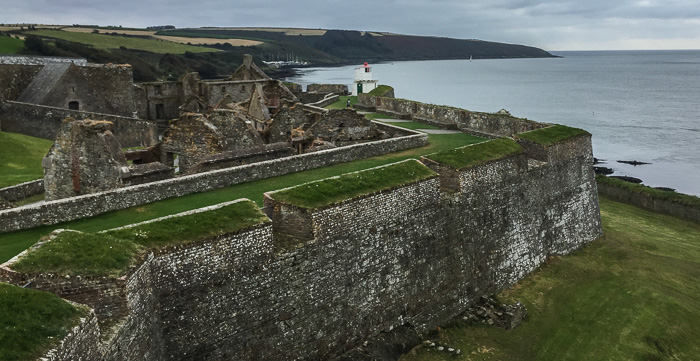 One small portion of the vast, star-shaped Charles Fort. It's a sight to see!

Our party of five arrived at Charles Fort with 45 minutes to fill before the free tour. No problem! We spent most of that time in the small museum reading up on the fort’s defenses, battles and inhabitants. I’m a sucker for stories, and was excited to find a captivating tale.  Until the end, that is; this one reads like a Shakespearean tragedy. If you can’t handle a shocker right now, do yourself a favor and skip to the next section. This heartbreaking story of the White Lady is taken verbatim from a display inside the fort:

Shortly after the construction of Charles Fort, Colonel Warender was appointed as Governor. His daughter Wilful married Sir Trevor Ashurst, an officer in the fort. On the evening of their wedding day, the bride, while walking with the bridegroom on the battlements, admired flowers on the rocks below. Sir Trevor assigned the task of obtaining the flowers to a sentry who agreed on the condition that Sir Trevor took over the duty of lookout.

The undertaking took longer than expected and Sir Trevor fell asleep. When the Governor during his nightly inspection tour discovered the ‘sentry’ asleep on duty, he drew his pistol and shot him dead. When the true identity of the ‘sentry’ was revealed to Wilful, she flung herself over the battlements in despair. Wearing her wedding dress, she is reported to have made many appearances on the battlements and is known as the ‘White Lady’.

Shot him dead?  The British military was known for its strict disciplinary code, but still...this seems harsh.  And final. 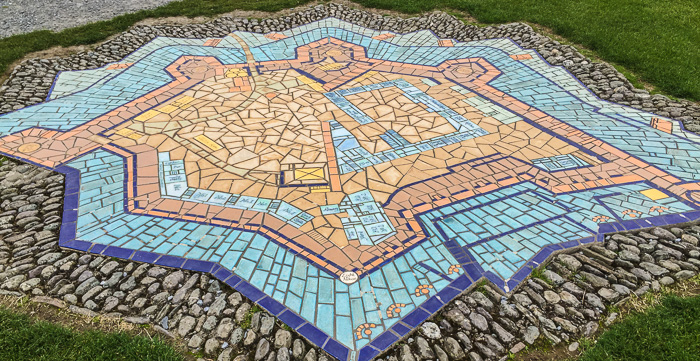 Mosaic of the Charles Fort, a unique star-shaped fort on Ireland's southern coast

After the museum, we made our way back up the hill to meet our tour guide at a large tile mosaic of Charles Fort. This OPW tour was shorter than most at just 15 minutes long, and didn’t actually go anywhere (we stayed at the mosaic map), but still gave a concise overview of the fort and its history: When Charles Fort was built in the 1670’s it was considered impossible to defeat from the water, in large part due to its triangular bastions, each mathematically designed to cover each other so that no portion of the wall was undefended. Unfortunately the inland-side of the fort was overshadowed by higher ground. This key weakness was exploited by King William’s forces in September 1690; the fort held for 13 days, but the Williamites ultimately won out.

British forces occupied the fort for hundreds of years making additions and improvements that can be seen today, most notably the extensive barracks built to accommodate hundreds of soldiers. The British abandoned Charles Fort in 1921 when it was taken over by the Irish Free State, but it then fell victim to fighting during the Civil War. Republican forces took the fort and then burned it, true to their “scorched earth” policy. It was neglected for decades, used by hippies in the 1960s (groovy man), and then taken over by the Office of Public Works in 1973.

That’s the fort in a nutshell. If you go, wear good walking shoes; your inner-child might clamor to run free.