I stumbled upon Lough Gur while researching sights to see near our delightful rental home, the Flemingstown House. As the days passed, I resigned myself to adding it to my “next time I visit Ireland” list, but then opportunity struck. We planned a Limerick day and Lough Gur was a perfect stop along the way, breaking the drive into two 30-minute stints. 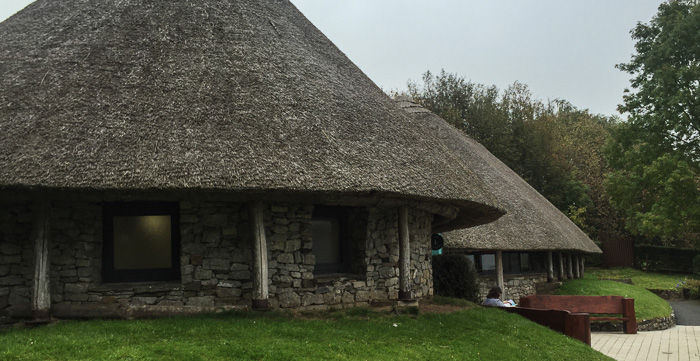 My simplistic four word summary of Lough Gur? This place is dense! Dense with history; dense with archaeological sites; dense with folklore. One information placard states that “the Lough Gur landscape has the visible remains of six millenia of human settlement”. Over six thousand years, the site has grown to be revered by locals as a place of magic, steeped in legend. I can’t possibly recount everything Lough Gur has to offer so I’ll stick to the history, sites and stories that most struck my fancy. Even at that, this promises to be a hefty post - I’m smitten. 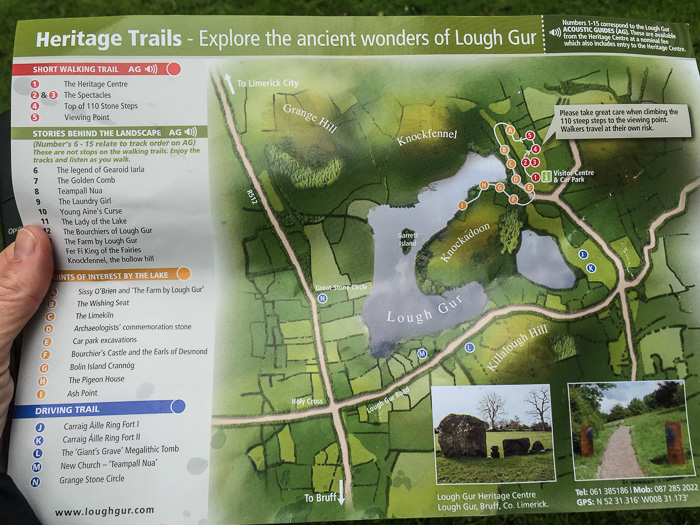 The Lough Gur trail map. As noted, numbers 1-15 correspond to an acoustic guide for rent in the Heritage Centre. It's worth the rental fee just to hear the 10 stories of fantastical folklore associated with Lough Gur.

Upon arrival we rented a few audio guides, consulted the complimentary map, and set off on the “Short Walking Trail”. We saw the remains of Stone Age homes known as The Spectacles on our way up to a viewing point which on a clear day would give a stunning view of the lake and surrounding hills. Alas, we had no view due to a persistent fog that had been pestering us for days. On the plus side, the misty gray shroud created a hushed atmosphere that set the stage for tales of magic and myth. 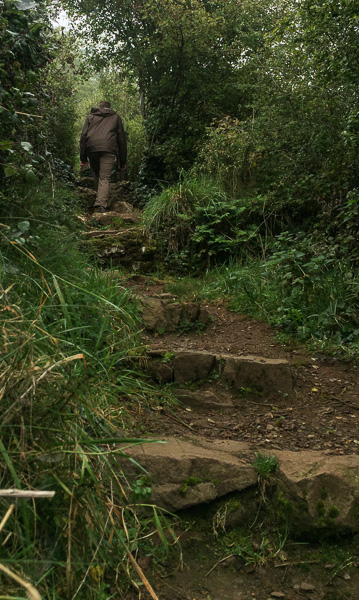 The rented audio guide provided ten - TEN - stories associated with Lough Gur. Since the stories aren’t connected to a particular location, we chose to continue our walk following the map’s “Points of Interest by the Lake” and at each stop, listen to one story. The stories! Oh how I wish I’d taken notes on each and every one. As I recall, many center on Gearóid Iarla (Gerald the Earl), the third Earl of Desmond. In local legend, Gearóid’s mother was the goddess Áine and it was from her that he gained magical powers.

The Legend of Gearóid Iarla
Gearóid was known to practice black magic and periodically change himself into different animals. One day he changed himself into a black raven, but the spell went wrong and he couldn’t change back. Áine could help - she was was an enchantress after all - but the two weren’t on good terms. Gearóid pleaded with Áine until she relented and turned him back to human form. But wait! As punishment, Áine banished Gearóid under the lake with his castle, servants and all, and there he remains to the present day. Gearóid is allowed up once every seven years to ride his great gray steed around the lake. The horse is shod with silver shoes and once the shoes are worn thin, he will be allowed to return to the land and rule Ireland once again. 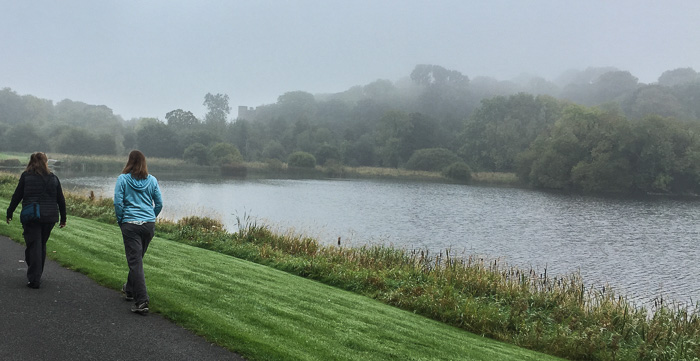 Lisa and Karen walking along the shore Lough Gur

People swear that they’ve caught glimpses of Gearóid’s castle below the water: large blocks of stone, too regularly placed to be a thing of nature. Could this be an instance where history and myth collide? Lough Gur is home to Bolin Island, one of three crannogs around its shores. Generally, a crannog is a man-made island built as a defensive homestead. Bolin Island, dating to 500–1000 AD, is a 30-meter ring of large boulders filled with brush, wood and earth. It likely had timber structures surrounded by a palisade or fence, and its inhabitants would have used a dugout canoe to reach the mainland. Here’s where it gets really interesting: some crannogs were connected to land by underwater stone causeways built in a zig-zag pattern to confuse the approach if attacked. Hmm, ancient stone walkway, or magical underwater castle…? 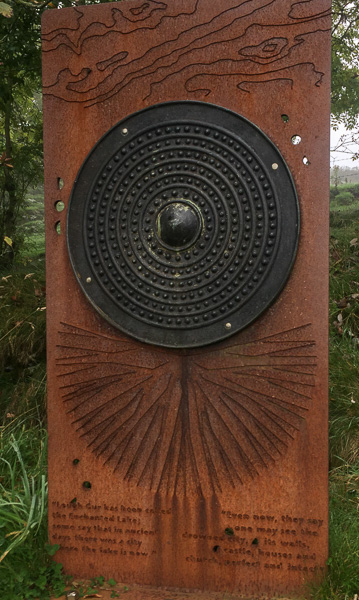 One of the many "Sun Shield" monuments scattered around Lough Gur

Makes you wonder what else lies below the surface of Lough Gur, doesn’t it? In 1847 the water level was lowered, revealing hundreds of artifacts including the 7th century bronze shield that has become the symbol of Lough Gur. This sparked a renewed interest in the area where archaeologists have found ancient pottery, tools, weapons, and personal effects such as bracelets, glass beads and bone combs.

The Golden Comb
The enchantress Áine lived under the lake but was known to come up on the bank from time to time, sit on a rock, and comb her hair with a beautiful golden comb. A local herdsboy spent day after day on the banks of the lake watching his cattle and sheep. He noticed that each time Áine finished, she’d lay the comb down and fall asleep. One fateful day the herdsboy watched and waited, then snuck over and stole the comb; Áine returned to the lake empty-handed. From that day on, every misfortune befell the herdsboy and he grew sicker and sicker. On his deathbed, the herdsboy told his parents of the comb and where it was hidden so that his misfortune wouldn’t pass on to them. When they threw the golden comb back into the lake, the lady Áine rose and held it high to show that she had regained her prized possession. The family had no trouble ever again.

Strolling around the lake, we came upon a couple of ruins including a dovecote (pigeon house) and Bourchier’s castle, a 17th century tower house originally built by the Earls of Desmond.

The Laundry Girl
One fine day, a young maiden went down to the shores of the lake to do the washing. After a time a fine handsome man came walking her way; she didn’t know him but assumed he was a gentleman from the big house nearby. The man never uttered a word as he slowly approached, placed a beautiful golden ring on one of the washing stones beside her, and then pointed to her to take it. The girl was about to pick up the ring when she looked down and saw rings of blood extending out into the lake. She grew frightened but when she looked up, the man disappeared into the lake. It is believed that the man was Gearóid and if she’d taken the ring, the girl would be forever trapped with him under the lake.

Rings of blood? Oh my. This story and many others are quite grim and may not be suitable for young children. On a lighter note, I laughed each time the narrator said “And as everyone knows, …” Apparently I’m not everyone! I learned a host of startling new information including the fact that Irish fairies are not the Disney fairies I grew up with. No, these are a terrifying lot to be avoided at all costs but fear not, if ever caught by a fairy simply light up your cigarette or pipe; as everyone knows, fairies can’t abide smoke. 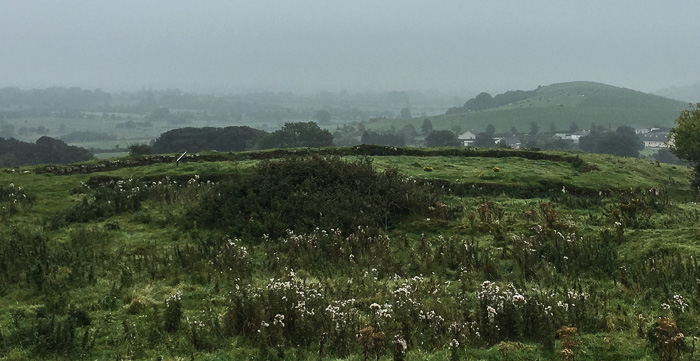 We finished our time at Lough Gur by hopping in the car to see most of the ancient sites listed on the “Driving Trail”, including: 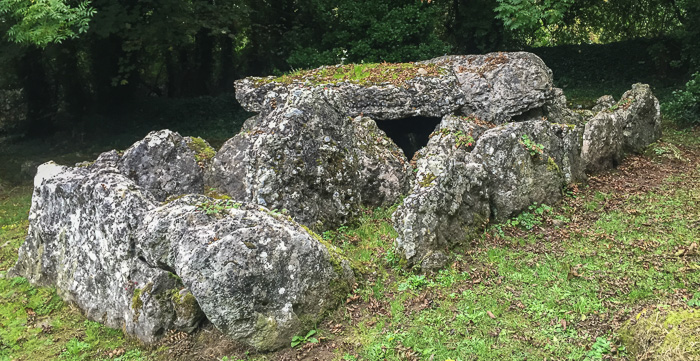 The megalithic tomb known as the Giant's Grave 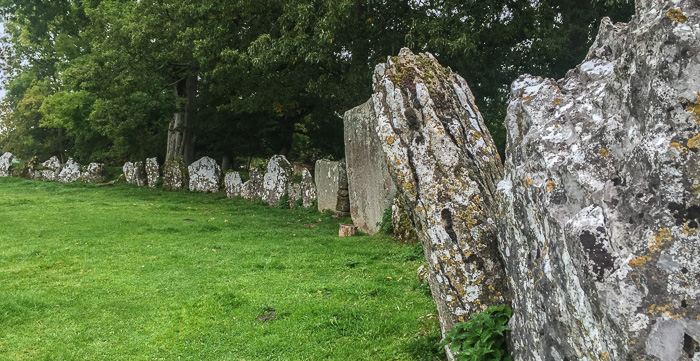 A portion of the Grange stone circle

Time to wrap up; here are my final notes! Before we set out, I’d read that Lough Gur was hilly. Since half of our group wasn’t up to hiking, they went straight to Limerick. Mistake! Yes, part of the “Short Walking Trail” includes a heart-pounding climb up 110 stone steps and the ring forts are set up and off the road, but these are a small part of the overall experience and can easily be skipped. The rest of the area is quite flat and an easy walk. 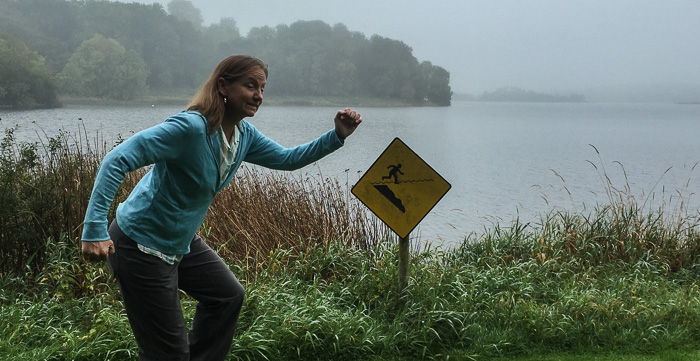 Ireland delivers yet another enigmatic caution sign! Karen is getting a running start to see if she can walk on water like the little warning guy.

Learning the stories of Lough Gur was a highlight, but I find audio guides to be an isolating experience with each person alone, silently listening in their own little bubble. I would much prefer written versions that we could read aloud to the group. Even better, a tour guide with a penchant for storytelling!

Location: GPS: 52.52313, –8.52034
Hours: Seasonal, check their website
Cost: There is no fee to walk the grounds outside of the Heritage Centre. The Lough Gur museum costs €5/adult (audio guide included) with concessions for children, families, seniors and students. Tours are self-guiding, but you can call to arrange a guided tour; the number is 061 385186.