Today we forged into the complete unknown! Most of our sightseeing days in Ireland include at least one place I visited on my previous trip in 2013. This isn’t a burden in any way; I learn something new each time and enjoy the peace of mind that comes from having first-hand knowledge of a sight’s location, basic history, tour schedule, etc. In short, most days I’m confident we’ll see at least one sure-fire win, a place everyone will enjoy. Today, not so much. We visited four sights and all were first-time visits. That can be a little stressful as I tend to feel I’m dragging folks along to see yet another pile of old rocks, but I’m happy to report these were gems start to finish. I will write about Charles Fort and The Donkey Sanctuary separately; read on for two off-the-beaten-track priories.

I love, love, loved visiting the ruins of this old priory but I must admit that my feelings are probably unduly influenced by our run-in with a powerful phenomenon that’s nearly impossible to resist: Unexpected Puppy. 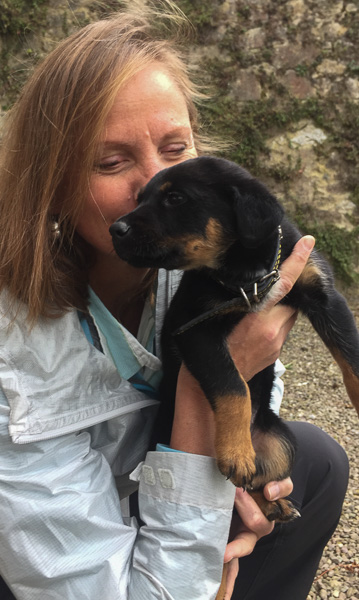 Karen with our puppy friend. Aww.

Oh. my. goodness. We arrived to find two gentleman training their dogs for police work. This was interesting in and of itself, but lucky for us, they also had a little pup who was free to tag along with us between his brief training sessions. 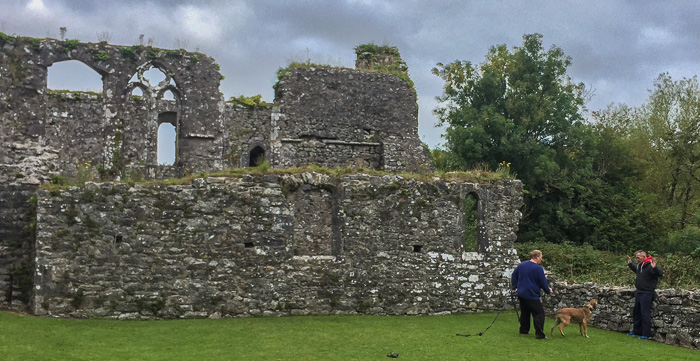 Bridgetown Priory was founded in early 13th century by the very generous Lord of Castletownroche, Alexander FitzHugh. He not only gifted over 1500 acres of land to the Augustinians, he also promised tolls from a nearby bridge plus a portion of the revenue from local mills and fisheries. The priory was quite prosperous at first - it certainly had an auspicious start! - but gradually fell into decline. When the priory was dissolved in 1541 it was valued at just £13. 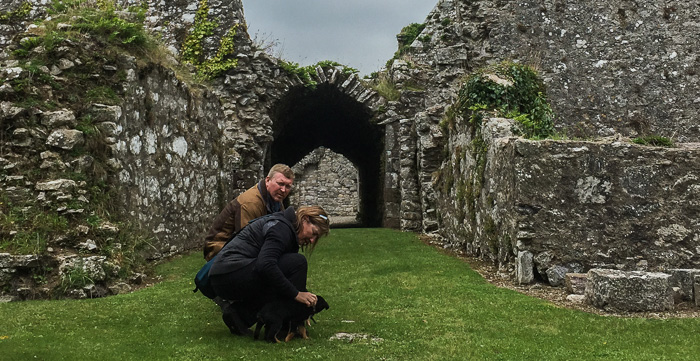 That’s a surprisingly paltry amount (hmm...or is it?) given the site’s extensive footprint that once held “a church with belfry, dormitory, hall, buttery, kitchen, cloister, and cellar”. All now lay in various stages of ruin, but some remain in excellent condition including portions of the church, the Roche family tomb, and a stone passageway. 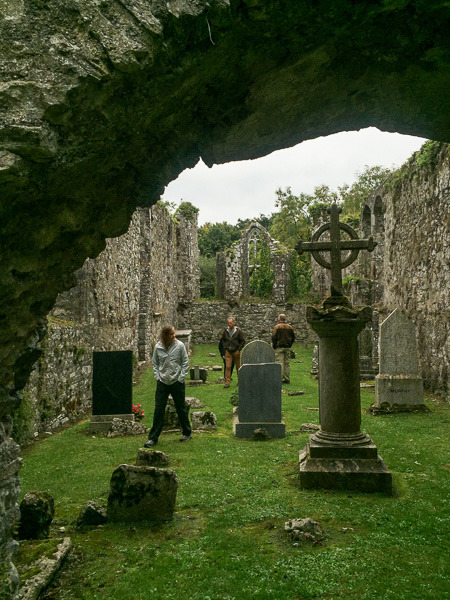 Bridgetown Priory has by far the most informational signboards of any site I’ve visited. Most are sprinkled throughout the priory and help explain what you’re looking at (invaluable!) but my favorite is the overview board that’s part of the “Stories from the River of Time” series.  These signboards typically give site-specific details along with information placing the site within a larger historical context. Since Bridgetown was a priory of the Augustinian Order, the board briefly describes St. Patrick, early Christian Ireland, the rise and decline of the Celtic Church, and the influence of Cistercian, Franciscan and Augustinian Orders in Ireland. 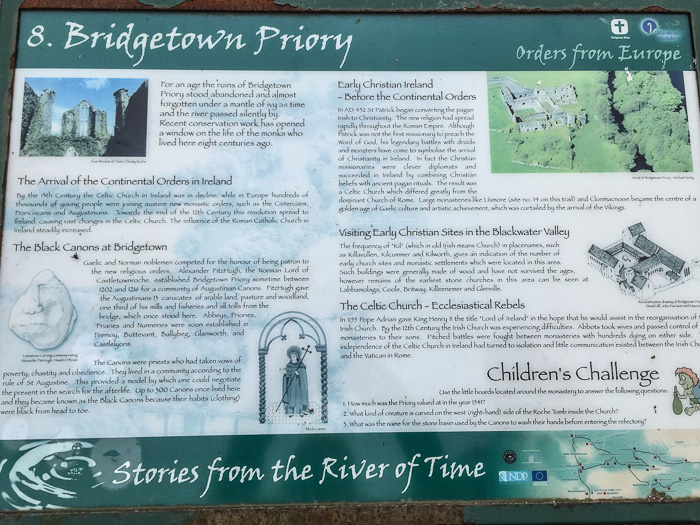 I love these "Stories from the River of Time." Interesting and informative! I just wish I could find a list of all of the sites in the series; I've tried, but no luck yet.

I’m also a big fan of the “Children’s Challenge” questions whose answers can be found on information placards throughout the site:

Puppy aside, I think this is a fascinating site that’s well worth a visit. Having said that, I sincerely hope you have the good fortune to run across Unexpected Puppy at some point in your travels! 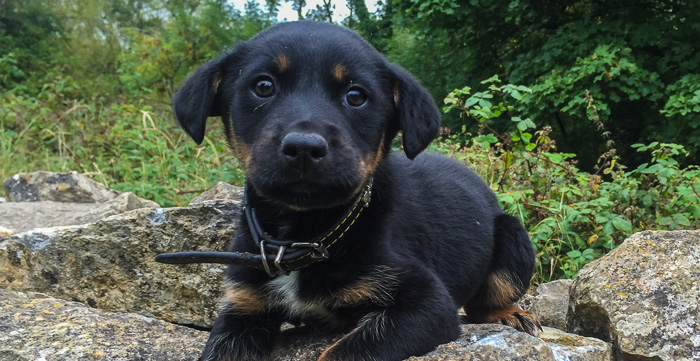 "Unexpected Puppy" at the Bridgetown Priory

Location: About 3 km south of Castletownroche, County Cork; GPS: 52.149672, –8.450358. Visit this Time Travel Ireland post for more photos and driving directions.
Hours: Access is not controlled; visit whenever you like
Cost: Free

I freely admit that Ballybeg Priory was shaping up to be a “meh” visit after we wandered around for 10 minutes and didn’t find anything terribly captivating. We were about to leave when I asked a local workman about the cylindrical stone structure set off from the main site. It didn’t look accessible, but he encouraged us to hop the low stone fence (there’s a stile - hopping isn’t necessary) and added “It’s the best part of the whole place.” Yes it is! The structure is one of the best-preserved dovecotes in all of Ireland. It doesn’t look like much from the outside, but prepare to be amazed when you duck through the narrow entrance. 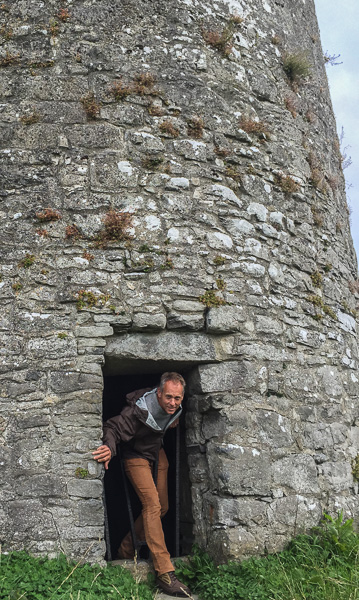 Believe it or not, the existence of this dovecote is a strong indication that Ballybeg was quite important. This Augustinian priory was founded in 1229 during a period when pigeons were considered vermin and were strictly controlled. According to medieval law, if you wished to build a dovecote, it could only contain one niche (i.e., one pigeon) for every 1 1/4 acres of land held. Since the Ballybeg structure contains over 350 niches, the priory must have controlled some 440 acres. 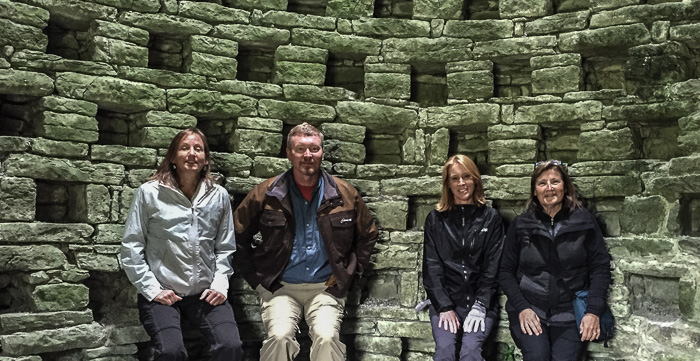 Karen, Dave, Julie and Lisa inside the Dovecote at Ballybeg Priory

This still begs the question: Why were pigeons so highly prized? They were certainly a stable source of meat and eggs, but more importantly, pigeons produced excellent fertilizer valued more highly than that from cattle, sheep or pigs.

There are no pigeons to be found now, but the dim hushed atmosphere, hundreds of niches, corbeled roof…it’s all quite mesmerizing. 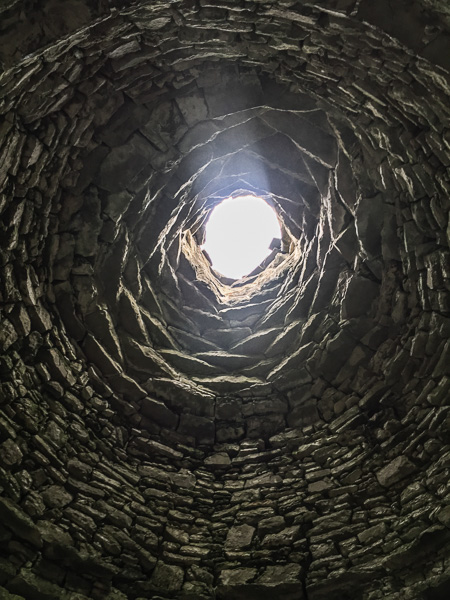 Looking up at the dovecote's corbeled roof. It's not missing a piece - the top must be open for doves to come and go.