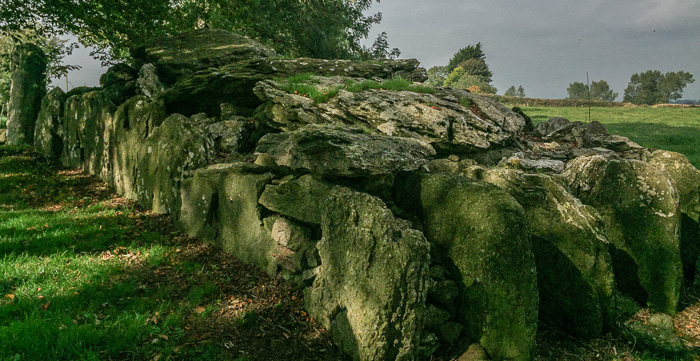 I can practically feel you rolling your eyes at me. Why would you want to see yet another pile of old rocks? I’ll give you three reasons to see the Labbacallee wedge tomb:

If that’s not enough, IT’S RIGHT BY THE SIDE OF THE ROAD. Why not stop if you’re driving by? 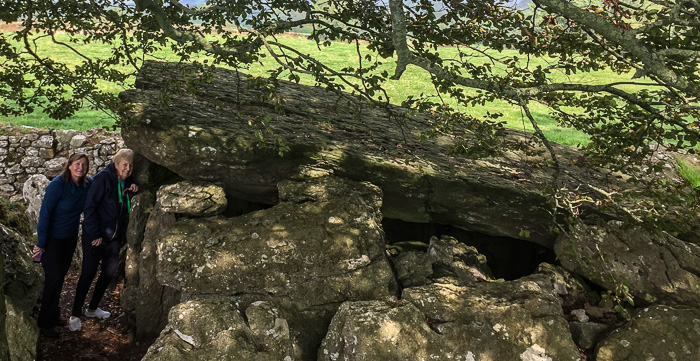 Lisa and Lynne peering into the Labbacallee wedge tomb

Ok basics first, then on to the stories. The Labbacallee wedge tomb dates to 2400 BC and is the largest wedge tomb in Ireland (as noted above). It has three massive capstones with the largest weighing in at 10 tons; the fact that they moved that sucker without a crane is a marvel in and of itself. You can easily peer between stones to see inside the tomb which is 43 feet long end-to-end, but divided into two chambers divided by a slab.

This tomb is more commonly known as the “Hag’s Bed”, but exactly when and how did it get this nickname? When the site was excavated in 1934, the team found the remains of a woman’s body in one chamber, but her skull was placed in the main chamber. Curious. Was this the hag? Or does the name simply refer to the site’s association with the Celtic Hag-Goddess Cailleach Bhéarra, the “Hag of Beare”? 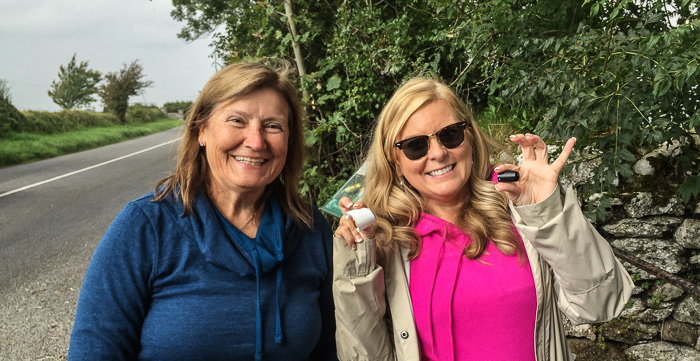 Lisa and Jennifer found the geocache at the Labbacallee wedge tomb

Many websites relay stories of Cailleach Bhéarra and her druid husband Mogh Ruith. While the fine points differ, all agree that the two had a tempestuous relationship; in fact most stories end with Cailleach Bhéarra throwing a large boulder at her husband pinning him to a riverbed and killing him. The “Labbacallee Megalithic Tomb” Geocache shares a far more detailed and entertaining tale. Since Lisa downloaded the Geocache information for off-line use (thanks Lisa!), she was able to read the story aloud to us as we stood gathered around the tomb; what a great way to bring the site to life! Here’s an abbreviated version of that tale:

Long ago there lived two giants named Shara and Sheela. One day Shara returned from a hard day’s work in the forest to find no dinner ready and waiting. In a fit of rage, he hit Sheela with his axe and wounded her shoulder. Upon seeing blood, he quickly came to his senses, bandaged the wound, and nursed Sheela back to health. Despite the care, Sheela remained bitter about the injury. As Shara walked across the river on the way to the forest for more wood, Sheela’s anger boiled over. She grabbed her bed and hurled it at Shara. The devil turned the bed to stone as it passed through the air and when it landed on Shara, it crushed him. To this day, Shara rests beneath the Hag’s Bed. As for Sheela, she never forgave herself and sat on a hilltop wailing for her lost husband, crying “Bad as Shara was, it is worse to be without him!” Sheela eventually died of grief, but not before uttering her final words: “Bad as Shara was, it is worse to be without him!” 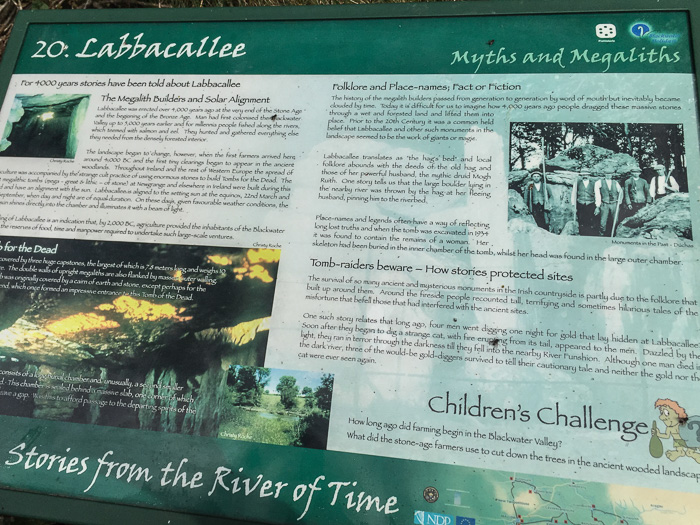 The interesting and informative signboard posted at the Labbacallee wedge tomb

Each time we stop at one of these historically-important-but-almost-completely-unprotected sites, I’m amazed that they’ve stood unmolested, in many cases for thousands of years. No doubt there are multiple forces at work, but I recently learned that folklore often protects Ireland’s ancient sites, Labbacallee included. Apparently one night long ago, four men decided to dig for gold beneath the tomb. As they were digging, a cat appeared before them with fire shooting from its tail. Terrified, they ran across a field and tumbled into the River Funshion where one man drowned, but the others lived to warn “Don’t disturb the dead at Labbacallee!”. Well there you go. Come take a look, but be polite about it :)