Sometimes you just need to trust your instincts and do what all the other tourists are doing. This is the way I felt about the Ring of Kerry, aka the Iveragh Peninsula, one of the most popular tourist destinations in Ireland. I remember staring across the bay from the Dingle Peninsula, wondering if the terrain there is as amazing as it looked from where we were standing.

Turns out several of our travel partners (Lynne, Jennifer, Dave, and Lisa) were also interested in checking this out, so we split from the rest of the group and I offered to drive the Ring of Kerry. Julie and I pored over maps and suggested stops to come up with a rough itinerary for the day, but the biggest question that loomed in my head was “clockwise or anti(counter)-clockwise”. During the high season on the Ring of Kerry, there’s apparently a non-stop procession of tour buses that must drive the ring anti-clockwise. Therefore, some travel experts (like Rick Steves) suggest driving the ring clockwise so as to avoid getting stuck behind these buses. I dug in a bit more, and discovered that on TripAdvisor the local experts strongly discourage this approach, claiming that it is far better to be stuck behind a bus periodically than to spend the day encountering them head on. After several days of driving the narrow roads in Ireland, this resonated with me and I chose the anti-clockwise route.

This was to be a long day, as the drive from Flemingstown House to our entry to the Ring at Killorglin would take 1 hour, 45 minutes. After a short stop in Killorglin for some coffee and sunglasses, we proceeded on N70 along the northern edge of the peninsula. 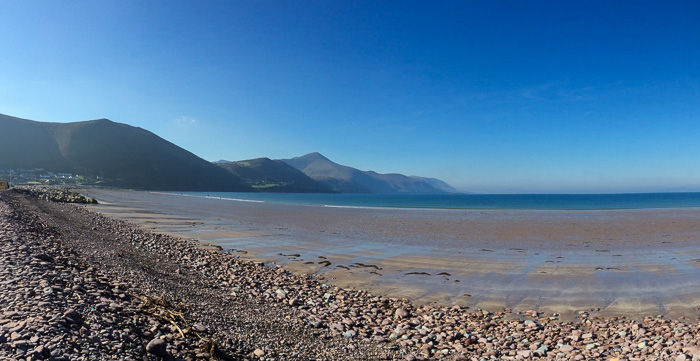 A view back into the Iveragh Peninsula from Rossbeigh Strand

Our first stop was a very quick one at Rossbeigh Strand, a six mile beach that reminded me of similar strands on the Dingle Peninsula. We didn’t have time to check out the Sunbeam shipwreck there, and it was only after post-trip research that I learned that much of the strand has eroded away into the Atlantic ocean. 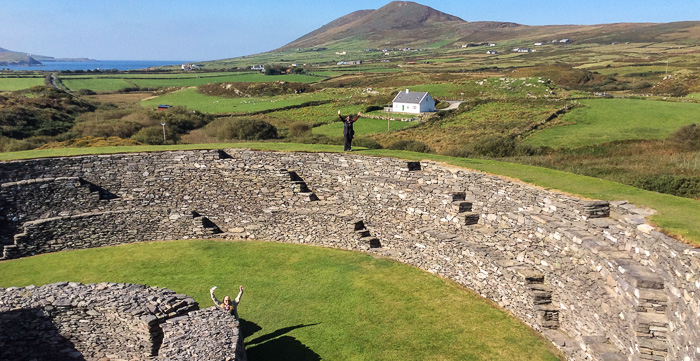 You probably know by now that we love to look at ancient piles of rocks, so our next stop would be the stone ring fort at Cahergall. Julie and I have seen our fair share of ring forts on this trip, especially on the Aran Islands, but this one was unique in two ways. First, this fort is tall! It felt even taller than the Black Fort on Inishmore, but that might be because the ring is so much smaller. Second, this is the first fully restored fort I’ve seen. The inner stairs were smooth, aligned, and solid. The views from the top of the fort are dramatic and worth the climb. 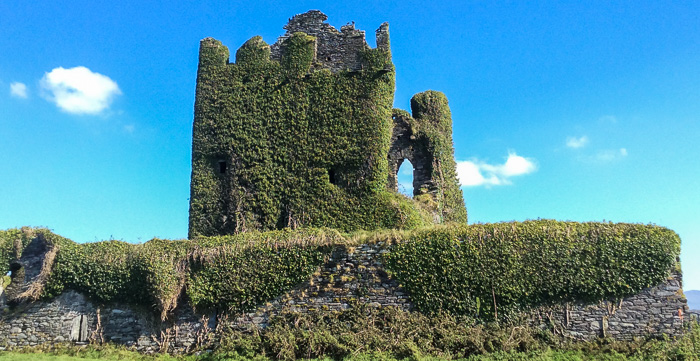 One landmark you can see from the top of the fort is the Ballycarbery Castle, a site we did not plan to stop at, but we were oh so glad we did. Julie may even want to explore some of the legends surrounding this castle, but even without a back-story it is worth a stop. Lots of room for climbing the interior with amazing views out to the ocean and other parts of the peninsula. Oh, and this castle may have been used in the movie Leap Year, which I have yet to see but plan to. How could I skip a movie with Amy Adams? This reminds me that I also haven’t seen P.S. I Love You, which apparently has a cover of Galway Girl in it. Add it to the list. 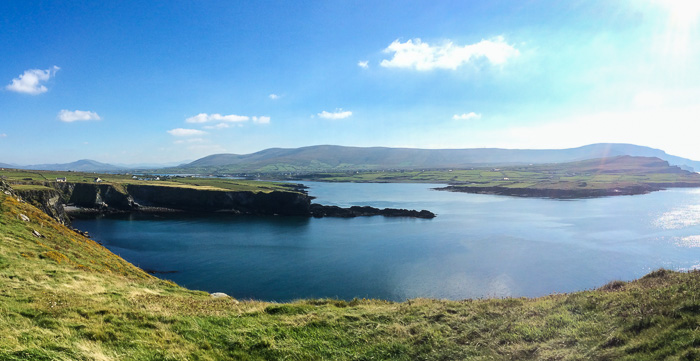 It is when we left this area to turn south that the scenery turned spectacular. I took an unplanned detour off the Ring to Valentia Island to take in the views from Bray Head. After all my ravings about the amazing views we had seen on the Aran Islands and Dingle Peninsula, it was gratifying to be able to share a view just as beautiful with more family. Some day Julie and I will return here and do some day hiking out to the end of the head. 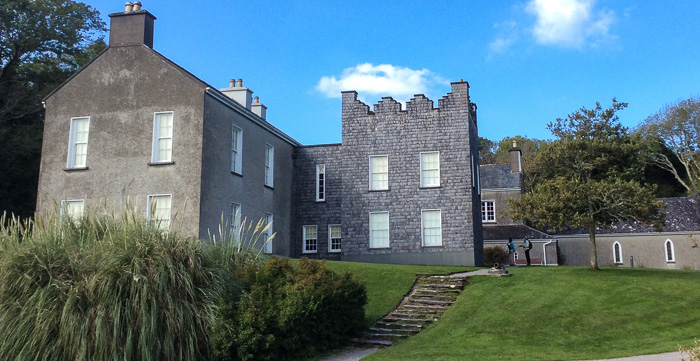 View from the south side of Derrynane House

In Dublin it is hard to escape the name O’Connell – a street, a bridge, and a monument are featured prominently in the heart of the city. These are named for Daniel O’Connell, The Liberator, and we had all had a good measure of history learnin’ during our time there. Hence, we couldn’t pass up the chance to visit Derrynane House, the ancestral home of O’Connell, right on the southwestern tip of the peninsula. And bonus! This is a heritage OPW site so we were all able to use our cards for entry.

Derrynane was a fun stop and worth a short visit, but I think I would have rather gone for a hike along the lowlands and tidal areas surrounding the property. The house is beautiful but doesn’t measure up well to similar estates (Muckross, Kilkenny Castle to name two “residences”). 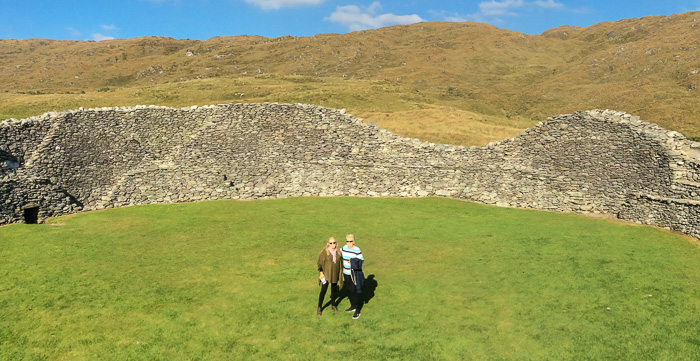 Jennifer and Lynne in the center of ruined Staigue Fort

We couldn’t pass up the chance to see another ring fort, so we took the side road to see the ruined Staigue Fort. This stone fort is nestled up in the head of a valley well away from the ocean, and you can see how this would have been primarily a place to hide cattle and family from raiders. I was happy that Staigue Fort was less restored so that my car-mates could see the dry stone masonry in something closer to its original form. The rock stacking looks so simple but the walls are so smooth that I can only imagine the experience and work it took to build. 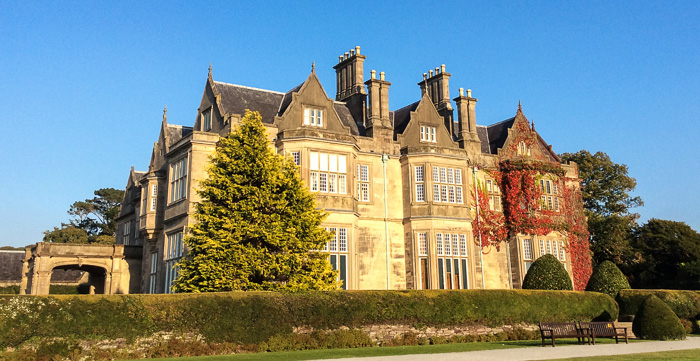 Time was running short for what would hopefully be our last stop of the day, so we high-tailed it away from the fort and drove through the pass to get to Muckross House near Killarney. We arrived after the last tour had left, but with some gentle persuasion I was able to convince the museum attendant to allow us to join the tour late. She even brought a host over to walk us up to the tour, and this host caught us up on key points we would have missed earlier in the tour. I continue to be amazed at the expertise and hospitality of the OPW Heritage guides in Ireland.

The owners of the house (the Herberts) fell into financial ruin after spending six years upgrading the property in preparation for a visit by Queen Victoria in 1861. There was hope of future favor to be bestowed upon Colonel Herbert after the visit that never came to pass, ostensibly because the Queen became a bit distracted after the visit. You see, 1861 was a notable year in Victoria’s life – her husband Albert died of typhoid fever in December not long after the visit. She went into seclusion for many years after this, so even if she had planned to bestow an Earldom (or whatever) to Colonel Herbert it was never to be. Fortunately for all of us, the house and its improvements have been lovingly restored and maintained and the tour is well worth taking. Not to be missed are the grounds surrounding the house; again, another spot where I’d love to spend the day hiking with Julie on some future visit.

Another note that history nerds like me find interesting about Muckross House: Colonel Herbert married Mary Balfour, and it was likely her dowry that funded the original construction. That name may be familiar if you are acquainted with British history: her nephew Arthur Balfour (aka Lord Balfour) was Prime Minister of the UK from 1902–1905 and was the author of the Balfour Declaration which laid the groundwork for the British Mandate for Palestine and the eventual creation of the state of Israel.

We ended our tour with a dinner stop in Killarney before driving back to Flemingstown House. The timing for the day went something like this:

Conservatively, with about five stops, expect a drive around the Ring of Kerry to take about six hours. We chose not to stop for lunch because we wanted to make Muckross House before it closed, and we barely made that on time.